Patch maps and an empty space

As I mentioned in my last post, I’ve broken my Thorncombe Street patch into five sections. The hoped outcome is a more balanced study of a big recording area and increasingly thorough examination of slightly neglected areas. When I say it’s a big area, I mean big – its size was actually defined via the (now defunct) Surrey Birders website, for which the patch challenge size was a generous 5 km2. However, it allowed me to cast a wide net, incorporating areas of remote Surrey countryside that would otherwise not be birded at all.

On that subject (without deviating too much), take a look at the below maps I took from Birdtrack – first, a roughly 22 x 11 km area of essentially un-watched Surrey countryside, comprising diverse, rich and mature woodland, mixed farming including remaining arable sections and various hills, rivers, ponds, and scrub. I think it’s safe to say this far south part of Surrey has the smallest population of birders in the county. Anyway, this goes a little way to explaining why I study such a big space. If I could do it all, I would!

Back to the main point: five sections. To outline these areas some smart maps have been drawn up. A huge thanks goes to Shaun who took the time to create these useful visuals. All can be found on the maps page here. I appreciate my patch doesn’t have clearly defined routes or parking, and there’s an element of having to ‘know’ the area. Hopefully these maps will be of use to the tentatively increasing number of visiting birders.

I’ll describe the area each map shows over the next few weeks, starting with the northern section. 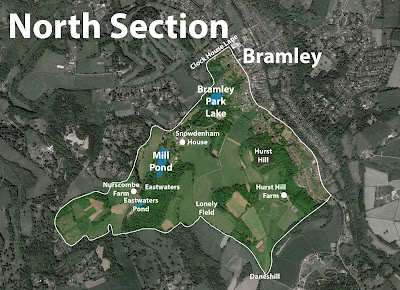 The Thorncombe Street Wetland Centre! This area is all about the ponds – species such as Mute Swan, Shoveler and Gadwall would be unheard of at TS if it wasn’t for Mill Pond, easily the most important water body. Aside from the noc-mig Common Scoter last year, every duck species on the TS list has been seen here, from Victorian-era Ferruginous Duck to the first site Goosander last year. Herons and egrets are always a possibility here, though there's no suitable shoreline for waders, alas.

There’s big imbalance in the north as I only really work the ponds. Hurst Hill Farm and Nurscombe Farm are terribly neglected – there’s no reason why the long-staying Black Redstart hasn’t been hiding at the former, a site I’ve not visited in months. There’s little doubt the odd Wheatear passes through too. Lonely Field is exactly that and is arguably the least watched place in the entire site. And I’m foolish to neglect: my first patch Nightingale (and the first since the 1970s) was found by a local at Clock House Lane, a tiny, scrubby area I’d otherwise never have visited …


This is the most built up part of the patch, with the entirety of Bramley on the west side of the A281 included. Aside from the highest concentration of breeding Collared Doves and Starlings there’s not much to shout about, though perhaps that flock of Waxwings or garden-feeding Rosy Starling will be found one day?

On the far right of the map, outside the patch boundary, you can just about make out Bramley Sewage Farm. A mouth-watering list of species used to winter here until roughly the 1970s: Jack Snipe, hundreds of Common Snipe, Water Pipits and so on were regular, and there are records of Short-eared Owl and Hen Harrier. Nowadays the working farm is very small, attracting just a few Pied Wagtails, and the surrounding fields are paddocks.
Posted by Godalming_birds at 06:05