From Iceland with love?

It was back into patch action proper over the past few days, though the usual difficult adjustment from bird-rich holidaying to bird-free local graft wasn’t the case, with three year ticks and two potentially interesting records rounding off a decent weekend. As well as this, with the shooting season over, I was allowed back on Broomy Down; there are few places I prefer to be than there.


I have long wanted to discover an Icelandic Redwing (coburni) on patch. With much overlap between coburni and iliacus in-field separation is impossible, and it can even prove the case in the hand too. As a result, Icelandic records are few and far between away from the west of the country and Scotland (they winter in Ireland and west Scotland down to northern Spain). Elsewhere they are treated as rare and in Birds of Surrey (2007) only two records are mentioned. That said, coburni is considered rare but regular in The Netherlands and parts of Germany.

Anyway, long story short, while sifting through a flock of a couple of hundred thrushes at Bonhurst Farm on Sunday, one Redwing really caught my eye and field notes combined with photos confirmed a few things: a darker bird with mud-brown upperparts, heavy streaking on non-chrome white underparts, a fairly hefty bill, darker malar stripe/brown feathering and solid dark brown ear coverts. So, a few Icelandic Redwing features there for sure – annoyingly the bird was part of a seriously jumpy flock and photos difficult to obtain. Any comments are appreciated. 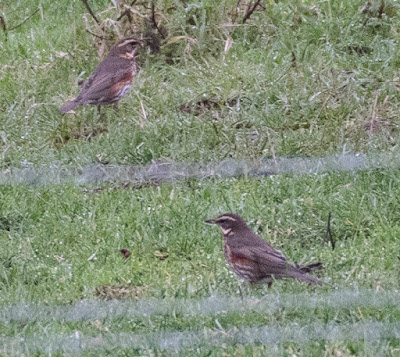 I was writing off Sunday as a birding day and beginning to look forward to the pub and Manchester City – Chelsea when I got a message from City fan Rich S about the Pink-footed Goose at Burpham Court Farm. I hadn’t planned on going for it by this point but the realisation it was 15 minutes from home and very straightforward viewing extinguished my laziness. I saw the bird, hanging about with Greylags. Regardless of origin it’s another smart find by Steve C who is on a great roll at Stoke – in the last few months he’s unearthed Caspian Gull, Shag and Siberian Chiffchaff too.

Single grey geese should definitely be questioned in these parts and past form (Brockham 2015, Cobham 2010) dictates that this bird won’t get accepted as wild (Pink-footed Goose is a county mega). Arriving on the back of relentless westerlies doesn’t help and one must remember Surrey has one of highest numbers of private waterfowl collections in Britain. Should the bird stick about for a few months the answer is clear.


However, there is absolutely a case to be made for this bird being wild. Pinkfeet have enjoyed a massive population increase over the past decade or so and extralimital records (for what’s traditionally a very localised species) are occurring more and more often. This winter Cornwall, Hampshire and Sussex have enjoyed multiple records, and it’s been a great few months for Pinkfeet in Kent (at least seven sites hosting birds). So, why not? Only a week before its discovery a bitterly cold spell gripped the UK and winter swans, interesting ducks and grey geese are usually what you’d associated with such weather … basically, it’s a very tough call!


Anyway, it’s unlikely firm answers on these two potentially Icelandic visitors will be established. In other patch news, a truly uplifting count of at least 30 Yellowhammers on Broomy Down on Saturday was both a surprise and a modern-day record for here. Credit must go to the Wintershall gamekeepers for allowing much of this area to go fallow over winter, with crucial cover crops supporting the birds. Hopefully we can get ringing some of them soon.


Aside from the thrushes, Sunday was fairly quiet though a day when Pochard are on Mill Pond is always a good one. Four to be precise, and surely the same three drakes and female that Abel found at the back end of last month. Following Storm Eric gulls were prominent all weekend and a Great Black-backed on Sunday was a second of the year, after three Lesser Black-backed on Saturday. Other bits included the continued presence of Crossbills (a pair and flock of 11) and the Bramley Park Lake Firecrest, which Shaun F got some nice shots of. Shaun also photographed a Buzzard that was ringed by Jeremy just outside the patch, near Munstead, in June 2016.
Posted by Ed at 07:36