South Florida: day one and two

While much of the UK was snowed under last week I was in southern Florida, in somewhat warmer climes. I’ve been to the US before (including Florida) but never properly birded, so we took advantage of some pretty cheap flights and headed over for a week from 26 January. The plan was to visit the southern Everglades before touring around the southern half of the state, chasing a few target species and booking accommodation wherever said route took us.


The trip was a real success with 152 different species recorded. Highlights included great views of the all the specialities (including, most pleasingly, Mangrove Cuckoo), an encounter with two Bobcats and finding a Florida rarity in Tropical Kingbird. I’ll do a formal Cloudbirders trip report at some stage but over the next few weeks and months I’ll do a few blog posts on the trip, in chronological order, mainly to make a home for some of the thousands of photos taken.

Day 1 and 2: Southern Everglades and Homestead


We landed at Fort Lauderdale at about 1 pm local time, eventually on the road south to Homestead a couple of hours later. At the airport, Collared Dove, Feral Rock Dove and House Sparrow made for an inauspicious first three species of the trip … however, we were soon on the Florida Turnpike and birds that’d become common daily sightings were soon noted from the car: American White Ibis, Black and Turkey Vultures, Boat-tailed Grackle, Great Blue and Tricoloured Heron, Loggerhead Shrike, Mourning Dove, Osprey, Red-shouldered Hawk and so on …

With a bit of light to play with we stopped at Black Point Park for our first birding of the trip. Hundreds of Laughing Gulls were heading to roost, with Brown Pelicans prominent in the quay. The best bird here, however, was a Yellow-crowned Night-Heron – a species I was keen to see. This actually turned out to be the only good view we got all trip, with the other record a flushed roadside bird on Sanibel Island.


Despite the only poor weather of the trip the following morning, a first visit to the southern Everglades was incredible. Driving in before dawn, Great Egrets and Wood Storks were prominent along the road verge. The first stop was Royal Palm, home to the famous Anhinga Trail. This opening dawn walk in the Everglades will stick with me a long time and this post (which will be too long anyway) can’t possibly include all the species we saw. 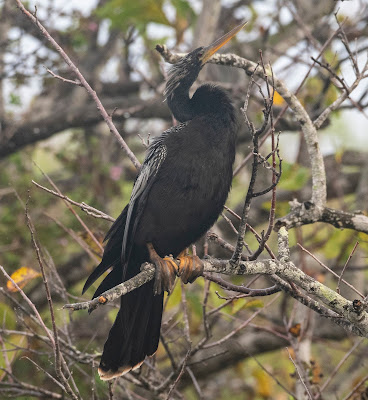 Highlights here included ridiculously showy Anhingas, Belted Kingfisher, Common Yellowthroat, Eastern Pheobe, Green Herons, Purple Gallinules and Orange-crowned, Palm and Yellow-rumped Warblers. Both Pileated (impressive beasts) and Red-bellied Woodpeckers were noted too. A particular favourite of mine was Great Crested Flycatcher. Eye-catchingly coloured and quite unlike anything in the Palearctic, I enjoyed watching these quietly zip from tree to tree.

A Northern Cardinal welcomed us onto the Gumbo Limbo Trail which – quite possibly – was my favourite walk of the trip (we visited several more times). This mainly West Indian tree hammock was heaving with warblers and other insect-eaters, and upon return visits I picked up some nice birds. Today, though, Black-and-white Warbler, Northern Waterthrush and White-eyed Vireo stole the show.

We tore ourselves away, driving through a diverse landscape that included sawgrass prairie, pine woods, mangrove forests and ponds. A few White-crowned Pigeons were seen flying over at various points – frustratingly I never got great views of this species, nor Roseate Spoonbill, which were fairly numerous, but often distant, flying over or shy. A flock of Tree Swallows fed low over an area of sawgrass as a Red-tailed Hawk circled overhead. We walked about halfway up Snake Bight Trail but the mosquitoes – for which the trail is famed – proved too much.


Next up was Eco Pond, just past the small village of Flamingo at the end of the road. This was a fairly productive area and our only American Avocets of the trip were seen here, along with an Indigo Bunting and a rather smart Northern Parula. We looped round to the beach, where a Grey Plover reminded me of home, before a flushed flock of Savannah Sparrows confirmed we were the other side of the Atlantic. On the slow, stop-punctuated drive back to Homestead, we picked up American White Pelicans.

The final stop of the morning was the renowned ‘Lucky Hammock’, at Frog Pond Wildlife Management on the outskirts of Homestead. This rather nondescript site has a fine record of attracting rare birds and I really enjoyed working it. Each visit here was productive, though I didn’t realise the full potential of the area until the last couple. With the humidity increasing bird activity was fairly minimal now, though two Common Ground Doves, a Meadowlark and a female Painted Bunting were good value. At least 10 Blue-grey Gnatcatchers were here too.


The rest of the morning and early afternoon was spent doing touristy stuff, though we’d pencilled in a visit to Castellow Hammock Preserve in Homestead later in the day. What was a suburban and essentially oversized garden was a really cool spot and we enjoyed our only hummingbirds of the trip – three Ruby-throated. Having never seen a hummingbird this was an encounter to savour and we spent a couple of hours relaxing on the benches watching these tiny things go about their business. 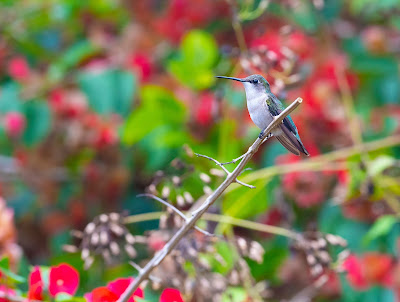 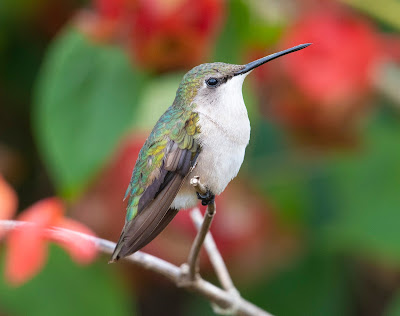 White-winged Doves – the only ones of the trip – were also seen here and nearby. The Everglades had left such an impression, and been so successful, that after just the first full day we decided to move on and complete our circuit so that we could come back here for the final couple of nights.