Prior to today (which I'll feature in my next post) it's been a quiet spell. Indeed, save two Willow Warblers singing at New Barn on Saturday patch has been very quiet. Sunday was veritably cold in fact; with a frost and chilly northeasterly at dawn. Perhaps it was no surprise I logged my latest ever Redwing, though having stumbled across my earliest Nightingale just over the Surrey border in Sussex the previous day, it made for quite the juxtaposition.


I'd ventured into Good Old Sussex to check out a strikingly large body of water that has long caught my eye while cruising Google Maps or an OS: The Lake (great name), in Shillinglee Park. There are next to no records from this impressive waterbody – similar in size to Frensham Little Pond – though the helpful folk at Sussex Ornithological Club helped; a September Black Tern was the standout and demonstrates the potential of the site. As well as the Nightingale, which was at nearby Mitchell Park Farm, I had eight each of Great Crested Grebe and Egyptian Goose.


I gave Shalford Water Meadows a bash with Kit on Wednesday night, hoping to locate his superb Spotted Crake find from earlier that morning. In an hour or so of carefully patrolling St. Catherine’s Pool at dusk we had no sniff, though five Snipe and a few Teal were decent value. The habitat here looks fantastic and, on this smallish pool alone during the last few years, Garganey, Green Sandpiper and now the crake have been discovered.


Presumably Spotted Crake (and all crakes/rallids) are the most under recorded birds in Britain. Despite a relatively small area of flooded marsh and sedge tussocks to hide in, the bird only showed thrice to Kit earlier and was exceptionally elusive – Steve gave it a few hours with no joy earlier in the day. I wonder how many pass by undetected? Loads I suspect. 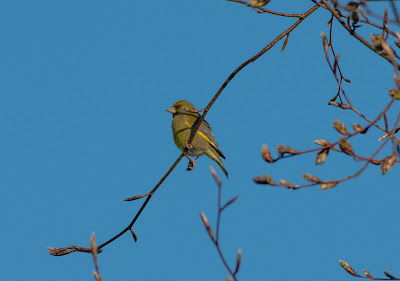 Aside from this dip and the aforementioned weekend bits it was quiet, though the forecast for the Bank Holiday weekend looks promising and spring migration should really begin to peak in the coming days.
Posted by Ed at 09:56