It’s been a typically quiet couple of midsummer weeks. On Saturday I visited my grandparents in West Yorkshire, taking the opportunity to stop in the Peak District on the way up. Given it was late June I didn’t see much, though a few Red Grouse were novel, and a Surrey birder will never sniff at Willow Tit either, of which one was seen. Others bits included plenty of Curlews and Lapwings, as well as Golden Plovers and Whinchats.


Intensive grouse moor management and raptor persecution is heavily associated with the Peak District. Given the impressively wild vastness of the area, you can’t help but feel so many more birds should be present – surely there is room here for Black Grouse, Golden Eagle and plenty of other species that’d make the Peak District far more ecologically diverse and appealing to the eco-tourist/birder.


On patch, what will doubtless be the biggest surprise of June came on Saturday 15th, when a male Grey Partridge put in a typically brief and distant appearance between Wintershall Cottage and Broomy Down. With all four estates in the Thorncombe Street area confirming they don’t release the species, their on-off presence during the past three years is a bit of a mystery. In time a piece on Grey Partridges in the county will appear on the Surrey Bird Club website.

In other patch news, the Little Owl pairs have begun to perform a little better now that – presumably – young are out the nest. The Gatestreet Farm birds have been particularly showy during the last few weeks and the Bonhurst Farm pair similarly so, with Steve and I seeing one and hearing another of the latter duo yesterday. We also cashed in on the Painted Lady influx, with at least 10 knocking about.

On Sunday, I had my first Winkworth Spotted Flycatcher of the year. On 20th, a Crossbill flew over New Barn, while, on 16th, the male Yellowhammer was loitering around the Tisley Farm hedge he and a female were eyeing up during spring. Hopefully they’ve bred.

Elsewhere locally, Reed Warbler breeding at Unstead was confirmed last week, with a fledgling logged and an adult carrying food seen (there must be a minimum of two nests put quite possibly five or more). I walked the farmland and North Downs at Compton and Loseley on Sunday in a failed look for Quail, with 14 singing Skylarks acceptable consolation.
Posted by Ed at 05:49 No comments:

The chief aim of day five was to finally connect with the endemic Florida Scrub Jay at Cape Canaveral. It ended up proving to be the worst weather of the trip, with a surprisingly cold northerly wind and grey skies.


As it happened, Storm Jaden was blowing a hooley the northern states and Canada, meaning plenty of passerines were fleeing south and, being based on a peninsula on the south-east coast of the US that morning, we witnessed a truly astonishing number (1000s) of American Robins piling in off the sea before feasting on berries all around us.


Prior to soaking up this spectacle, Northern Harrier had made it on to the trip list with several birds quartering pools around Wilson. Eventually, after a nervous blank 10 minutes or so, the first Florida Scrub Jays revealed themselves at Canaveral National Seashore, before two individuals showed exceptionally well on the roadside verge. I make no excuses for the following scrub jay photo-fest … 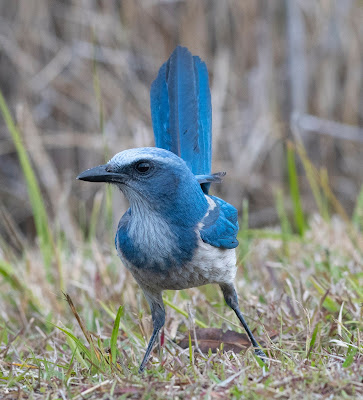 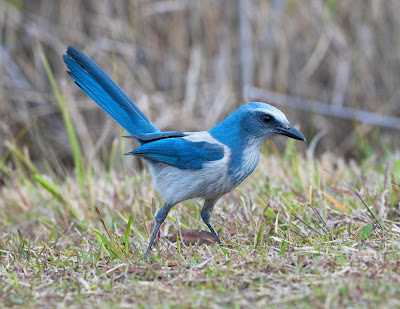 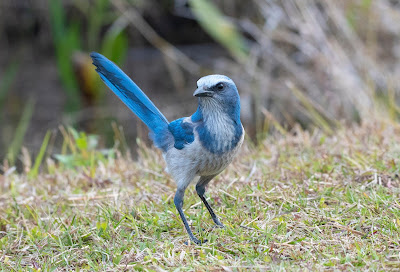 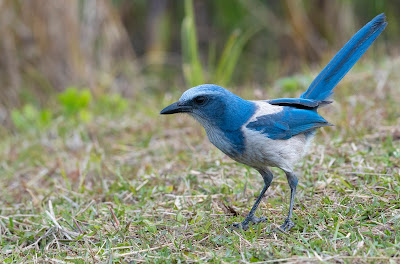 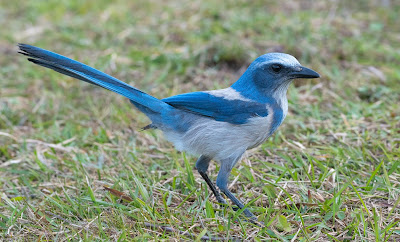 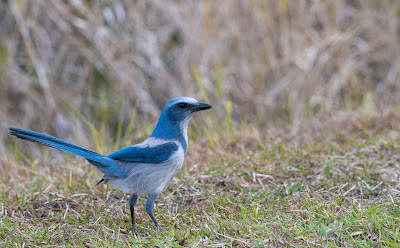 Continuing through more pools to Playalinda Beach, not too much was seen with the wind really picking up. American Robins were still arriving en masse, visual migration of passerines unlike anything I’ve seen in Europe before. At the beach, a few Gannets and Forster’s Terns were offshore.

On the way out, we stopped on the main bridge over Indian River to Titusville. Bobbing on the water were a few rafts of Lesser Scaup, both Mew and Ring-billed Gulls were loitering around the car and a few Great Northern Divers were fishing close in. Best of all, however, was a large flock of Black Skimmers, taking five in an empty car park and allowing close approach.

We knocked coastal birding on the head and ventured inland in an attempt to escape the wind. Viera Wetland, a sewage farm come bird reserve, was fun, but not spectacular, with a few terns (Caspian, Forster’s) along with the usual water birds. Another wastewater site nearby surprisingly delivered heard-only King Rail and Least Bittern in the breeze.

After spending the chunk of the day doing non-birding stuff, we ended at the spectacular Arthur R. Marshall Loxahatchee NWR, a wonderful managed piece of cypress swamp. There were heaps of birds here, but best of all were the Snail Kites, with a couple of distant juveniles hunting in the flooded meadows. A few Northern Rough-winged Swallows hawked overhead, and it seemed every bush was teeming with warblers. 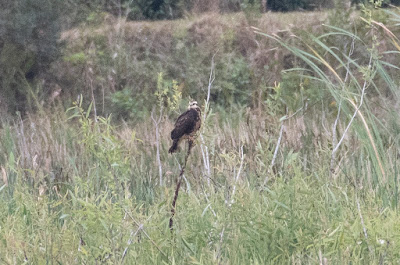 Day six was relaxed, as we were back in the Evergaldes for the remainder of out stay, and there was one main target: Short-tailed Hawk. As far as I’m concerned these appear the neatest of the ‘hawks’, but they are rare and localised in the US, with almost the entire population in Florida (some are on the Arizona/Mexico border). This is generally a tropical species and migrates to the southern tip of the state during winter. 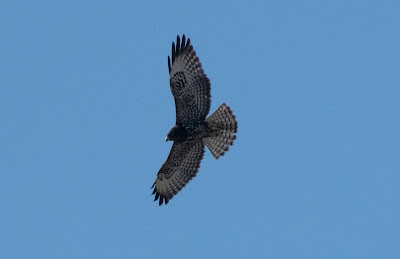 Anyway, after dipping earlier in the week I was pleased to locate one bird eventually, thermally just to the east of Eco Pond. Good times – I love a raptor, and these are particularly smart. The bird of prey success continued later, when a distant Swainson’s Hawk cruised over Lucky Hammock.


Earlier that morning we’d located a few Sedge Wrens on Research Road, along with some more Eastern Meadowlarks, absolute novelties for the European birder. We stuck our head in a few other places, including Gumbo Limbo, before spending the afternoon doing other stuff.

The weekend just gone was the first relatively free one I’ve had for several weeks. As a result, I decided to give the patch a bit of TLC, it in return providing me with a year tick and several noteworthy breeding records.

June rarely delivers a new bird for the year but, having not been able to get out on Thorncombe Street as much as normal during May, Common Tern still evaded the 2019 list. Since Matt had the area’s first in 2015 the species has increased, averaging roughly four a year, and with Tuesley Farm reservoir holding a veritable colony these days I wasn’t surprised to see one drifting west over Allden’s Hill on Saturday morning.

Birds from Tuesley occasionally visit Snowdenham Mill Pond and Bramley Park Lake to fish, but more often cruise back and forth as they collect food from the fisheries near Cranleigh. In a blustery and wet south-westerly, akin to ideal patch wader conditions in late summer/early autumn, I lacked motivation to comb the patch too thoroughly, instead saving my energies for Sunday morning.

By then, it seemed we’d moved on from late summer conditions to something from mid-November, with damp grass and heavy fog over the ‘Cranleigh Plain’ between my bit and Winterfold. It didn’t linger long, mind, and I was eventually able to enjoy a pleasing haul of breeding species. Siskins have been loitering around Hascombe Hill all spring and a flyover at New Barn was a good sign, as was at least five Skylark nests at Tilsey Farm. This species was a scarce visitor as recently as 2016, but two summers of late hay cutting at Tilsey – a site that has zero disturbance from dogs – has worked wonders.


Also in the lark department, probably the most impressive breeding record this year is that of a pair of Woodlarks. The pair set up shop a while ago and on Sunday both were carrying food around, with fledged young presumably tucked away. The nearest population is probably Blackheath or Winterfold, so this is quite a record, and comes after a male held territory nearby last summer. The first Spotted Flycatcher pair seem to be contentedly nesting, with a male taking food in to a presumably sitting female at Selhurst Common.

Marsh Tit has been a real success story during the last year, and I was quite amazed to log at least seven birds in the southern section. This species is low-key in summer, but after stumbling across a family party on Juniper Hill, I then had food-carrying adults and/or fledglings at three other spots. Add in the usual birds at Winkworth, and the various territories I’ve yet to check in the central and east sections, then it’s been another fantastic breeding season.


On a personal note, the best breeding outcome so far is that of a/one of the Lesser Spotted Woodpecker pairs – last weekend I had at least one fledgling and an adult not far from a usual site. It seems to have been an extremely positive year for this species in South-West Surrey – I know of at least six drumming males in spring, and one other site where chicks (four) have successfully fledged this month.
Posted by Ed at 08:08 No comments:

A few days in Romania

I spent a few days last week on the Black Sea coast of Romania, in the Dobrogea region. Far from a Pally Tally jaunt, it was a relaxing trip soaking up the rays and logging 145 species, including such eastern fare as Pallas’s Gull (the sole lifer), Paddyfield Warbler and Pied Wheatear, along with an abundance of more typical southern stuff such as Roller, Booted Eagle and Bee-eater.


A formal trip report is up here on Cloudbirders, so the below is merely a selection of some of the many photos taken (and a reminder to myself that I need to finish my Florida posts ... ).