After the intensity of the heatwave, last weekend felt like autumn arrived in theatrical fashion. Saturday was wet and breezy – the worst conditions for a bioblitz. However, a bit of rain didn’t prevent Steve and I taking part on the Surrey Wildlife Trust’s (SWT) second annual bioblitz at Bonhurst Farm, in the east section of my Thorncombe Street area patch.


SWT moved in about 18 months ago after the Snowdenham Estate – which runs from south Bramley (next to Bramley Park Lake) down to the southern edge of Bonhurst Farm – leased the entire site at a cheap rate. The landowner wishes to reengage with wildlife on his land, with the primary focus to build Bonhurst Farm into an example of profitable farming that simultaneously benefits wildlife.

There are plenty of positive plans in the pipeline which, should they go ahead, will boost the bird population significantly. It’s been a relatively slow start, but several meadows have been created with suitable margins, and there are short-term plans to plant new hedges. Longer-term visions include a wildlife pond, scrapes and the creation of a ringing site.


Steve and I had done a test session in Birtley Brook earlier in the month, which yielded a reasonable number of Chiffchaffs. On Saturday, despite the rain, we still managed six birds of five species in four hours, of which an adult Robin typically proved most popular with visitors. In my bird survey I logged 51 species in the miserable conditions, which was a solid figure all things considered.

A Herring Gull (the first of the season), Firecrest (near Lonely Field) and one of the Hobby pair were highlights – suitably low-key headliners for this rather washout of a wildlife festival. I suspect I’ll be spending plenty more time at Bonhurst during the coming weeks, especially as it’s the best spot for migrant chats and wagtails, as we enter that stage of the season. 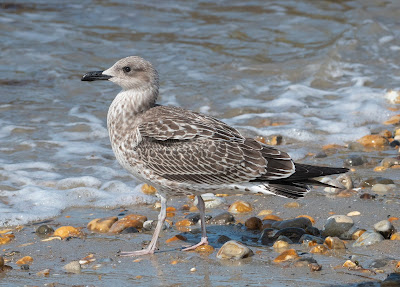 Chidham was awesome; thanks to Andy W on the Selsey Whatsapp for the gen. At low tide, curiously it was the commonest large gull, with a nice range of plumages to boot. They must breed nearby. I’ll be back to check it out again soon. No apologies for the photo-fest above and below ... 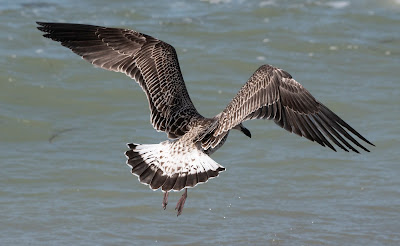 After a disappointingly poor spring of noc-mig, with no notable records since March, I was pleased to enjoy a bit of wader action on the night of 25th/26th. Best of all was a Greenshank (you can listen here) – only the second site record and noc-mig first, but a small flock of Black-tailed Godwits and two Whimbrels were good value too. Fingers crossed there’ll be a few more shorebirds picked up as they migrate over this patch of the Surrey Hills in the coming days and weeks. A marked Wood Sandpiper influx renders this species an exciting possibility.
Posted by Ed at 10:54