The August Bank Holiday has a knack of delivering the goods at Thorncombe Street and 2019 was no different. Indeed, it was probably the best yet, with Monday perhaps the most enjoyable day of the year so far and arguably one of the more memorable days on patch full stop.


After a spell of westerly winds, things changed on Friday, with light easterlies from the continent bringing with them fine and hot weather, lasting until yesterday. On the face of it – easterlies in late August – it couldn’t have been more ideal. The Bank Holiday bonanza got off to a slow start, though.

On Friday I covered pretty much every inch of the patch but, despite a flyover Tree Pipit and three Spotted Flycatchers at New Barn, it was quiet, save my second earliest Reed Bunting on The Ridge. Noc-mig – finally back in play after a frustrating ten days of technical difficulties – didn’t produce much either. How that would change …

In the field, the quietness continued on Saturday. A dawn sky-watch on The Ridge produced a trickle of gulls heading south, but apart from the continued Spotted Flycatchers (a family party, with a couple of very young juveniles still being fed) and the first Shoveler of the season on Snowdenham Mill Pond, the notebook remained somewhat empty.

However, Saturday night and Sunday morning noc-mig turned out to be one of the busiest nights I’ve had. The headline, lo and behold, was an Ortolan Bunting, hot on the heels of the first that was recorded on 29 August last year and in similar conditions (easterly winds, late August and after 3 am). A recording can be heard here – a nice and clear ‘tew’-type call, with a neat kink in the middle of the sonogram.

A small Curlew flock, several Robins and a Spot Fly flew over too, along with, bizarrely, a juvenile Common Tern, which seemed to be flying over the microphone for a few minutes! To put these figures into a little context, a recent combined thermal imaging and sound recording study in Dorset yielded 117 visual birds, but only two nocturnal flight calls. In short, noc-mig is only picking up a tiny fraction of the number of birds migrating at night.

If you apply that ratio to my night of recording on Saturday, when I logged 13 birds, then some 760 more flew over silently! Simply mind-blowing stuff. Perhaps, then, Ortolans fly particularly low, or are more vocal than many species?


Anyway, back in the daylight, the run of poor form continued on Sunday. By this point, despite decent birds being found elsewhere in the south-east, I was beginning to wonder if the weather was just too fine for migrants. I’d barely had any. A long stomp around the south section and outside the patch, to Hascombe Hill and back, was lining up to be the worst session of the weekend.

Then, metres from the car after being on foot for hours, a Redstart appeared briefly along the track at New Barn. Birding often throws up weird quirks – in 2018, on Bank Holiday Sunday, I was on patch later than usual due to a few drinks with mates the night before. I saw a Redstart along the track at New Barn. This year, I was again out the night before, started late and also saw a Redstart, pretty much in the same bush as 2018. Very strange, and reason enough to rename said track Redstart Ride.


The Redstart was a year tick, and after a night of noc-mig that would produce another Ortolan (leaving me verging on incredulity prior to a chat with others in the noc-mig group), it was time for round four on patch. Up first was a quiet Winkworth, before it was back to New Barn. There was no sign of the Redstart, or initially much else before, despite checking every passerine.

I reached New Barn Pond when a warbler flew silently from the willow scrub to one of the taller trees to the south. I lifted my bins to it with a feeling of ‘here we go again’, so was chuffed to notice that said warbler – a phylloscopus – had a particularly long primary projection. Once I clapped eyes on it there it was: a particularly smart Wood Warbler. 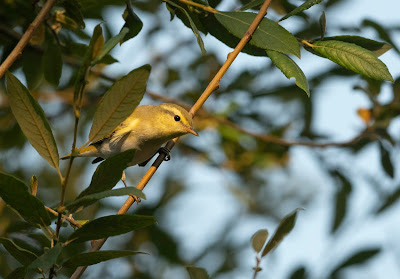 These are always gems to bump into, especially given how rare they are in the south-east these days. Eventually it flitted down to the pond willows and bushes, allowing truly superb views as it quietly pottered about, occasionally giving its mournful call. 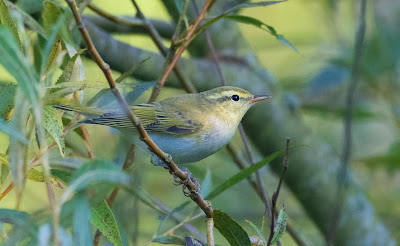 I eventually tore myself away, and that proved wise. The family party of Spot Flys were still about, and so were another in Hive Field, at the bottom of Scotsland Brook. There must have been at least five, including two youngsters. However, much to my delight, a separate bird turned out to be a Pied Flycatcher – a patch tick, no less.

I had the bird in view for less than a minute before it vanished into the woodland, not to be seen again, despite its Spotted congeners happily feeding from the hedge on which I first spotted it. This bird was the fifth for the recording area and first since a dapper male at Winkworth in April 2012. Over the weekend there was a small influx of the species in the south and east, including several elsewhere in Surrey. 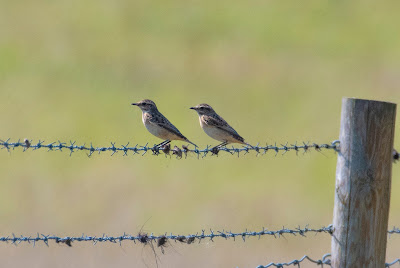 That short spell of patch joy was enough to make a weekend, despite it all happening in a tiny percentage of the total amount of time spent on the site over the weekend. To round things off, a quick mid-afternoon drop in to Bonhurst Farm produced yet another year first, via the shape of two showy Whinchats along a fence line in one of the large meadows. This species is just – only just – annual at Thorncombe Street, so it’s always a privilege to bump into one, let alone two.

It was an excellent weekend. Nothing super rare (at least visually), merely the beauty of migration in action, as unfamiliar faces visit familiar landscapes, on a long journey from far away homes to distant wintering grounds.
Posted by Ed at 05:25