A weekend of two halves

It was a strange weekend of birding, with largely unfavourable conditions making for a mixed bag of sessions. Saturday was superb – a classic mid-September session on patch – but Sunday and Monday were far quieter.


Now is the time for vis-mig to really kick off but the high pressure sitting over Britain means any decent session looks off the cards for the next week or so. Over the weekend there was minimal cloud cover, so it was a surprise that Saturday delivered some fairly decent vis-migging (both in the sky and on the deck), presumably aided by the gentle easterly.

After a slow start, hirundine and Meadow Pipit action picked up, culminating in a respectable count of 384 House Martins heading south-west. Some 72 mipits were heading the same way – sadly it seems the fine weather will rule out any big days of these, one of my favourite species, here this autumn.

Singles of Skylark and Reed Bunting south added a bit of variety and hinted at October, but birds on the deck – especially at Bonhurst Farm – were more of a nod to August. Two splendid Yellow Wagtails dropped into the cow field briefly before continuing south; these were my first on the deck for 2019 in what’s been a below average year for them.

On the other hand, it’s been a superb year for Whinchats, which seem to be loving the changes at Bonhurst. Three, in the large meadow, was a record site count and the third appearance of the year for this species – the best tally to date. 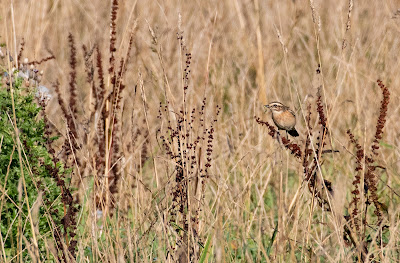 Also at Bonhurst, one each of the local Little Owls and Hobbies put in a showing, a Willow Warbler sang and a Whitethroat may be the last of the year. Save the main push of hirundines and mipits, Tilsey Farm and New Barn were quieter, though three Spotted Flycatchers represented a latest ever Thorncombe Street record.


After a long week at work during which time I wasn’t able to get out on patch, such an eventful session was most welcome. Back home I was contentedly watching Liverpool against Newcastle when the mega alert went off, with news of an Eastern Olivaceous Warbler. I rarely twitch outside the county these days, especially when it involves a species already on my Western Palearctic list (as Eastern Olly is).

However, quite to my surprise, the bird in question was at Farlington Marshes – some 30 minutes down the A3! It was a wonderful record for the south coast and, with the sun shining and time on my hands, I thought why not. Abel was similarly keen and in a flash we were parked up and looking at the bird, as it merrily hunted insects among the rose hips and hawthorns in a patch of scrub, occasionally stopping for a preen 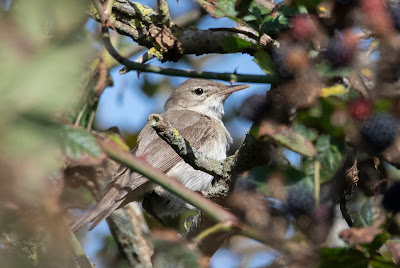 The views were OK – enough to see a few tail-dips, with the pale tones and whacking bill standout features. Weirdly, this is the second iduna I’ve seen on the south coast, after a ridiculously elusive Booted Warbler some 22 miles east at Climping in 2013.

The crowd size grew considerably while we were there, so we decided to walk the rest of the site. We didn’t see the Wryneck which was present near Crater Pond, but a Whinchat, Yellow Wagtail, Tree Pipit, Bearded Tits and a decent selection of waders made for a good supporting cast. I’ve always preferred visiting West Sussex coastal sites over ones in Hants, but Farlington seems a superb spot, and one I’ve only visited a handful of times. 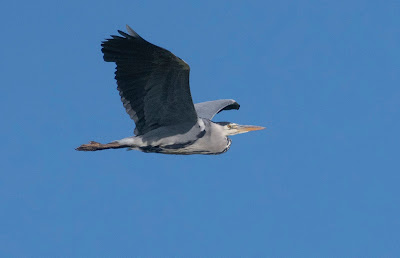 On Sunday it was back to patch. The forecast dawn cloud didn’t materialise, meaning vis-mig was quiet, despite a record count of seven Grey Wagtails bombing south-west over Tilsey Farm. Also here was an apparently knackered male Wheatear, a Yellowhammer, a singing Willow Warbler and a few squadrons of geese overhead.

Winkworth was very quiet, with a small party of Siskins aside Rowes Flashe feeling rather wintry, as did the loafing group of Black-headed Gulls on Snowdenham Mill Pond. At the latter site, wildfowl numbers are climbing, and I counted 15 Gadwall.

After the fine weekend weather, Monday saw a switch to overcast with a westerly wind – ideal for vis-mig. However, it very much flattered to deceive, and 84 Swallows south-west was a poor return and the best of a quiet watch. 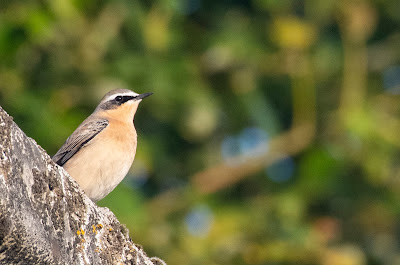 The week ahead looks uninspiring with mainly fine, warm conditions tied with north winds – perfect for southbound migrants. A spell of south-easterlies over Friday and Saturday could produce excellent birding, but with the associated fine conditions it could well be a non-event, certainly in Surrey.
Posted by Ed at 04:49