Every patch year is different. For me, 2018 was marred by erratic and unusual weather. Spring was short and frustrating, autumn exasperating. This year has been so much better. It may be the more regular weather, or it could be a revised approach to working the patch. It’s perhaps a bit of both, plus other factors, the biggest of which is always good fortune.


Whatever the case, the good run continued over this past weekend. After the wonderful Bank Holiday weekend, midweek was slightly more usual. On Wednesday, a brief skywatch from The Ridge was curtailed by rain, though a large flock of hirundines that contained two Sand Martins – only my second of the year – was noteworthy.

At Bonhurst Farm shortly after, a Wheatear was kicking about on one of the fences, perhaps deposited here following said rain. It was still present the following day too, on the same bit of fence line. Otherwise, though, Thursday was quiet, with a Spotted Flycatcher at Tilsey Farm and a few swirling masses of hirundines the best from several hours of stomping around the west and south sections. That said, it was pleasing to prove Little Grebe breeding in the latter section, with an adult and a well-developed youngster on Nobody’s Pond. 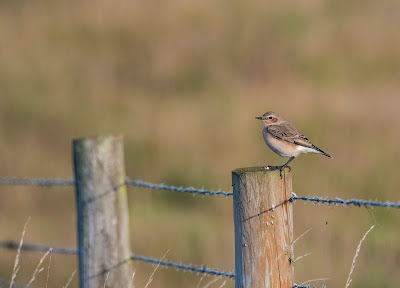 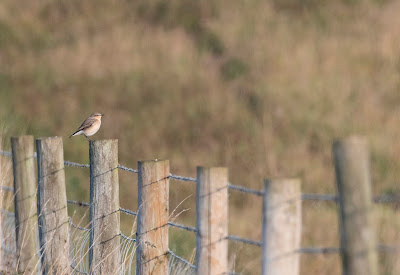 With the day off, I decided to mix it up in the afternoon, and visited the farmland east of Shackleford, an area that I’ve become particularly fond of. It looks great for migrant chats here so it was no surprise that two Wheatears were knocking about around the airfield.

In each of my few visits here there’s always been plenty of raptors. Presumably, the well managed fields offer plenty of food, and the proximity to Puttenham Common and the North Downs probably helps. A strikingly pale Buzzard, present for the second visit of late, was sat on a hay bale, but it was a different, airborne individual of the same species that drew my attention to a more distant raptor. 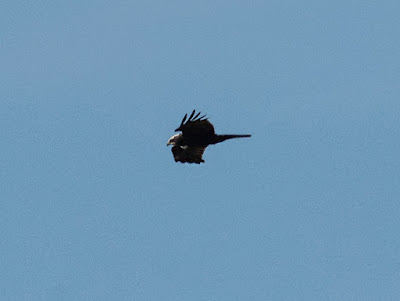 It wasn’t a third Buzzard, but a female/juvenile Marsh Harrier – an excellent surprise. It scrapped with the buzzard for a little while before lifting lazily east and towards the A3. I presumed it’d disappear that way, so was caught off guard when it reappeared again towards the end of my walk at pretty much the same spot just north of Chalk Lane. Presumably with said downs to the east and Puttenham Common to the west, it fancied loitering a while.

It was a misty start on Saturday and it felt rare, but it was in fact quiet on patch. However, an otherwise dull walk of New Barn was illuminated by a Lesser Spotted Woodpecker – totally unexpected at this time of year (and in this location). It was initially in the same willow as the Wood Warbler from last weekend, but it soon moved about a bit. An odd but welcome record. 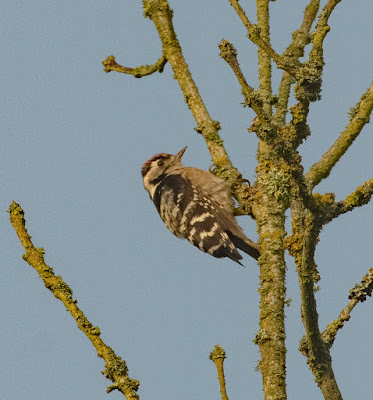 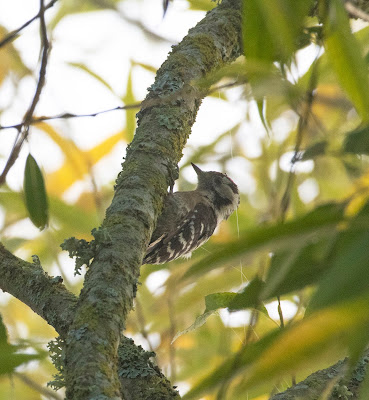 There must be loads of these little guys shifting around the Surrey countryside, undetected outside the February/Marsh drumming season. Conversely, in fact, there has been a curious run of extralimital LSW records this past week or two, including birds at Unstead (a great record by Ray), Priest Hill, Godstone and Thursley Common. In case of interest, my write-up of The Woodpecker Network 2019 LSW results is here.

The woodpecker was my 88th species logged on patch in August, with 94 recorded in total during the month (including noc-mig stuff). It’s easily the most diverse and productive month to be on the site – arguably that applies to all inland spots too.


As a result, I was sure September would get off to a slow start. However, it turned out to be the best session of the week, ensuring the month began with a bang. When collecting the recorder from Allden's Hill, a Yellow Wagtail flew south, which was a good start, though the real action was at Winkworth Arboretum. My first visit to Winkworth was as a very young kid in 1999 – my old bird diary tells me as much. On Sunday, some 20 years later, I enjoyed probably my most fruitful visit to this perennially underachieving site.

It began when I spotted an acrocephalus in the small Rowes Flashe reed bed. It was playing extremely hard to get (I hadn’t even deciphered if it had streaks or not) when a Peregrine dashed over the lake. This species is scarce or even rare here (indeed it is in South-West Surrey) and the bird – seemingly born this year – performed a couple of low circuits as it clutched onto some form of feathered prey, part of which was in its beak.

This was a big distraction, as I tried to convince this warbler to show itself, but a ‘wit’-ing Pied Flycatcher in the small trees on the east of Rowes Flashe was more so! After picking up my first patch Pied Fly last weekend, the recent influx has triggered a London bus effect, including another on noc-mig. The bird, like the one last weekend, soon disappeared, into the upper arboretum with a roving mixed flock.

That allowed me to concentrate on my acro. Finally, it crept out of the base of the reeds – a Reed Warbler no less, only my second on the patch and the third ever (all have been at Winkworth). I watched it for a bit and then it scampered back into cover, before sub-singing for a few minutes.


I hoped for similar greatness at New Barn but it was quieter there, despite huge numbers of Blackcaps and Chiffchaffs, with only Willow Warbler, Whitethroat and Spotted Flycatcher to be dug out. Tilsey Farm didn’t offer much, save a Wheatear that may have been flushed from somewhere nearby before departing north.


I wondered if it’d drop in at Bonhurst Farm but it didn’t, though a particularly confiding Whinchat did, on the exact same fence line the two last weekend had favoured. Good times. In all, it was a fantastic start to September, a month that has struggled for memorable moments at Thorncombe Street since I started patching it. Maybe this year will be different.
Posted by Ed at 02:36