This is a little interlude away from my normal blog style, just to touch on another completely unexpected local record: Surrey’s eighth Little Bunting, which I had the good fortune of bumping into at Thursley Common earlier this morning.

It had been a very quiet session, having arrived half an hour before dawn and walked around Pudmore and Ockley Common, with little more than a few Lesser Redpoll and Crossbill flocks of note. Having worked through Spur Wood and nearing Shrike Hill, a flock of Meadow Pipits feeding on some burned ground caught my eye and I started scanning through them at about 08:18. As I did, I suddenly heard a series of ‘ticks’ – from a ticking bunting!

Cue panic and mayhem, and swift removal of my bins from my eyes resulted in me seeing the bird in question dive into the clump of birches beside the short boardwalk at Spur Wood. A tense minute or two followed, and then three buntings suddenly flew out together and disappeared towards Pudmore, silently. I photographed each one, presuming one would be the Little / Rustic Bunting … but a look at my photos showed they were all Reed Bunting.

Clearly this bird was still about but it wasn’t showing, and I feared it had moved off through the back of the birches. Thankfully, this wasn’t the case, and at about 08:25 a Little Bunting appeared on a short pine! I couldn’t really believe it but there it was, giving monster views (although the light was all wrong so my images are low quality) and calling a lot to boot. It was pretty mobile even now, flying around to different perching places, but easy to follow due to its constant calling. I guess it had been feeding on the ground with the pipits before I inadvertently flushed it. 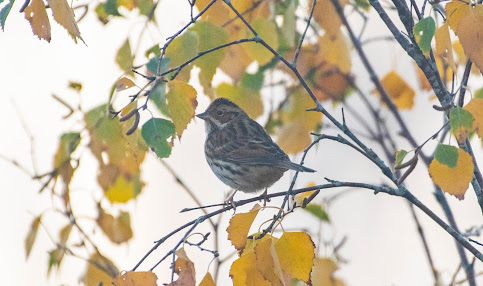 I called Dave B – the Thursley main man – first up and he was immediately on his way. I stuck it out on BirdGuides and other channels soon after. By now, the bird was becoming more and more mobile and I was getting anxious for Dave. I lost it for nearly 10 minutes prior to his arrival but, thankfully, we were able to relocate it on the other side of the boardwalk towards Ockley Common / Merlin Mound.

Here, we enjoyed decent views as it perched in a conifer. At about 09:05, it suddenly took off and flew very strongly towards Ockley Common. As of this evening, there has been no further sign, though I suspect the search party isn’t huge given the 2016 bird.

To cap off an extraordinary little period, the final tree we’d seen the bunting in was soon occupied by a male Lesser Spotted Woodpecker, which proceeded to give excellent views at close range. Classic Thursley birding – absolutely dead for ages and then everything happens at once! 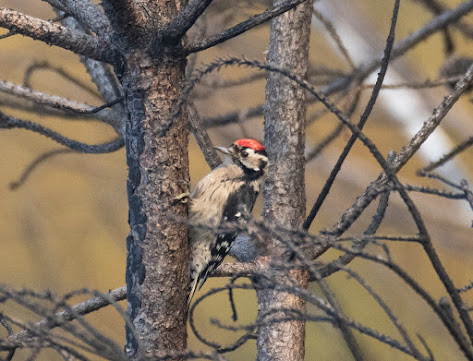 Little Bunting is in the mega category in Surrey with this just the eighth record (pending acceptance). A bird at Pyrford from 5-31 March 2016 was the first for more than two decades and proved an unblocking individual for many (bar me, who dipped it twice). Prior to that, the last birds consisted of a crazy spell in the 1990s, when four were recorded between 1991 and 1995.

This quartet included south-west Surrey’s three records, all of which were on remarkably similar dates to each other: Milford, 13-27 April 1991 (E Garcia); Frensham Little Pond, 14-17 April 1992 (S Peters); Thursley Common, 15 April 1995 (N Murphy). So, a fourth for south-west Surrey, and a second for Thursley (so a huge score for Dave!).

A couple of footnotes to finish. Firstly, the bunting came exactly one month after the Short-toed Lark at Shackleford, which I find pretty crazy. I wonder what 19 November will bring … also, exactly four years and 360 days prior to today, Matt and I had a ticking bunting at Thorncombe Street which we are sure was Little, but couldn’t nail. It had haunted me ever since. So, given I missed the Pyrford bird, it wasn’t one I thought I’d have another shot of in Surrey. But that’s birding and it’s a very nice way to hit 220 for Surrey (and 178 for south-west Surrey, and 154 for south-west Surrey this year). 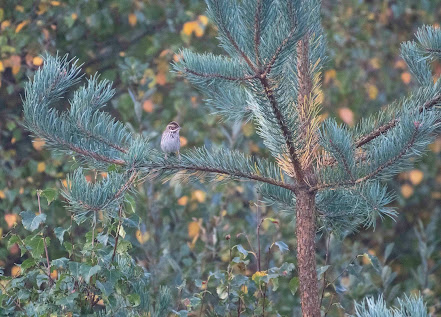 I’m sure 2020 has a few more aces up its sleeve, in terms of Surrey / inland birding biggies. What seems likely is more ‘Sibes’ such as this will be found inland in the coming weeks. It’s been a phenomenal October for many eastern scarcities: 17 Dusky Warblers alone in the UK, much higher than usual numbers of Radde’s and Pallas’s Warblers, two inland Red-flanked Bluetails and plenty more. Filter down in action. Here’s hoping for one or two more surprises before 2021.

As much as I would like to 'baggsy' one of those Sibe biggies you mention Ed, the chances are that it will be you who finds it. Just reward for your discipline, dedication and knowledge.

Very kind words Steve. I think 99% of it is luck and time in the field though. All to play for in the coming weeks!

Brilliant blog - but woodlarks coming here from France? Shouldn't they be going the other way?