In my last post I wrote: ‘one last good local bird before 2021 – ideally a nice and easy twitch of something found by someone else – would cap the year off nicely’. Incredibly, and in a weird strain of reverse psychology, this happened, with Dave B deservedly finding a Surrey epic on Friday. In fact, it was much more than a ‘good local bird’ and adds another incredible species to this maddest of autumns in south-west Surrey. Indeed, a switch to easterlies these last few days has meant autumn is treating us to a very late show, and maybe there’s more to come.

A flyover Little Egret was noted while I was working in the morning, only the second I’ve had from my home.

I went somewhere new this morning and it proved a good decision. I wasn’t aware one can walk Holmen’s Grove, a forestry commission site just north of Grayswood, but it turns out you can. Much like Chiddingfold Forest, I suspect all these Low Weald woodland sites have good potential and a benefit of Holmen’s is that there are more clearings than you’d expect – useful for keeping track of a flock of finches, for example.

Apart from decent numbers of Marsh Tit it was a quiet start, until I located a some 50 or more Lesser Redpolls in an open area on the west side. Careful scanning soon revealed a frostier, chunkier beast among them – surely a good candidate for Mealy Redpoll from the off. As they always are, the flock was very flighty and it took a good hour or so before satisfactory views and poor photographs were obtained. 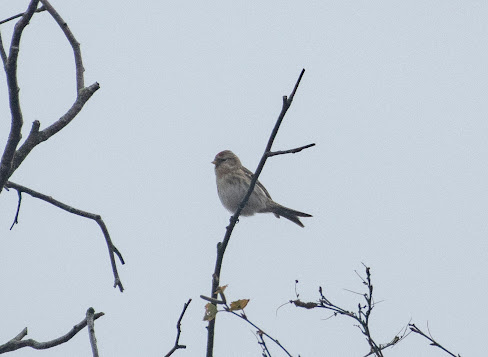 The dull light didn’t help, but the opinion of myself and the majority of folk I consulted was that this was a good Mealy Redpoll. The features were surely too extreme for a pale Lesser (indeed most Lessers I see at the moment are very buffy-brown, almost Twite-like). I’m cautious with redpolls and it’s likely they’ll all be lumped soon. Some 32 Crossbills were present not far away and seemed to be dropping to the ground out of view, presumably to drink. Slightly more unexpected were flyover sightings of Cormorant and Grey Wagtail. 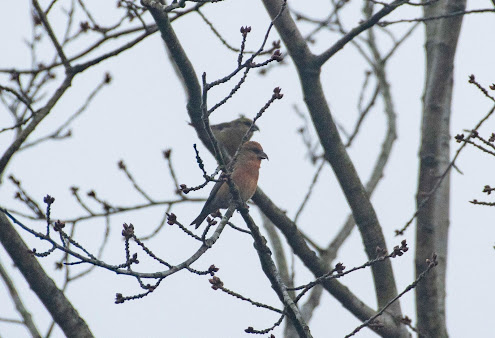 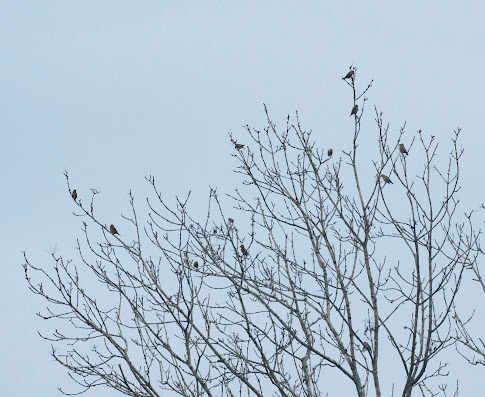 At dusk, I walked Shackleford. A lack of winter stubble seems to have made the site less productive, especially compared to this time last year when a Hen Harrier and large Lapwing flock were present. It was rather quiet, but about 25 minutes after sunset things sprang into life a little. A couple of Grey Partridges began to sing, then seven were seen in flight, before a Little Owl started calling to the north and 45 Fieldfares flew to roost.

A day off, but a foggy start meant a lazy start and I was lying in bed when a message came through from Dave. It read ‘tell me I’m not going mad’ and was accompanied by a full-frame back-of-camera photo of a Rustic Bunting! A bolt out the door, breakneck speed trip to the Moat car park and sprint – which was not easy through mud in wellies! – across Thursley Common had me clapping my eyes on a dreamy first-winter Rustic Bunting some 25 minutes later.

I’d barely caught my breath by the time I saw the bird which, with its boldly-marked, creamy supercilium, pale underparts, rufous flank streaks, wing bars and ear-covert spot stood out like a sore thumb amid the dull tones of the vegetation. Amazingly, it was in the exact same spot as the Little Bunting, which soon showed as well. After enjoying the moment and appreciating the calm before the storm, we knew it was time to put news out and open the floodgates for the masses … 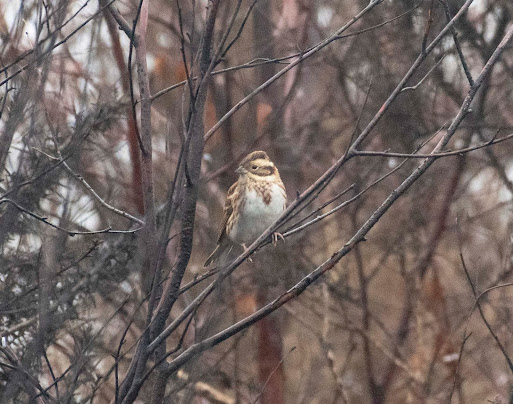 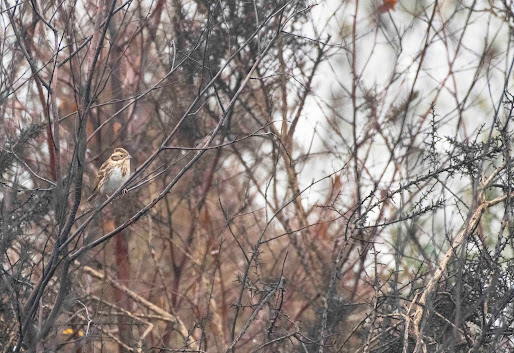 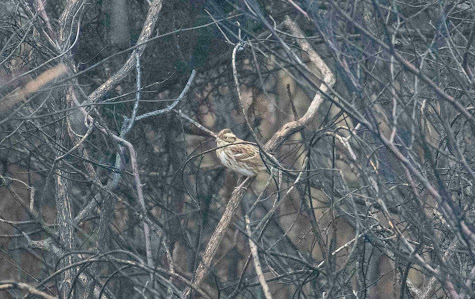 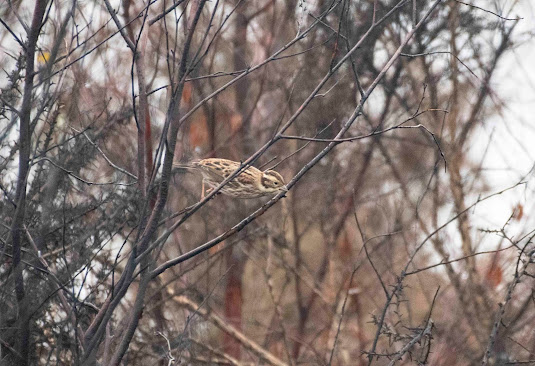 In what has been a crazy autumn in south-west Surrey, this is perhaps the peak – only a second for the vice-county (the last bird was, amazingly, also with a Little Bunting, at Beddington in 1993) and a BB rarity to boot. A massive hats off to Dave, with whom it’s been great to join on Thursley this year, encouraging each other along during the (many) dry spells. He has worked the site for years and it’s a well-deserved mega find. You can't beat a BB on your inland patch! The Rustic puts me on 158 for my south-west Surrey big year and is my 221st county bird.

As we watched, a Lapwing flew over, which was a year tick for him and only the second record on the common this year. We slipped away as the first birders arrived, checking Forked Pond for Goosander. None there, but two Little Egrets were rather curiously up in the trees, seemingly looking for prey from height, and a Kingfisher called. A Crossbill by the Moat rounded off a memorable morning 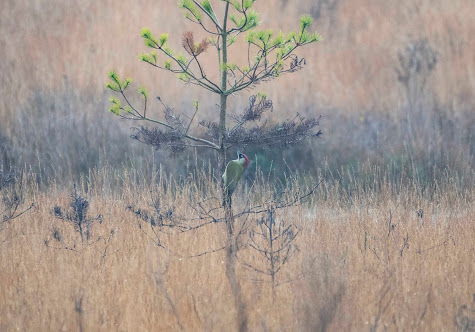 At dusk, I tried again for the Bittern at Frensham. As ever, no joy. Highlights were a female Pochard and 1,000 or more Black-headed Gulls roosting on the Great Pond and, at the Little Pond, two Little Egrets, Kingfisher, Water Rail and Crossbill. Best of all was a surprisingly impressive Starling murmuration of some 3,500 birds, before they descended into their reedbed roost.

Sam had dipped the Rustic yesterday so I joined him first thing for another go. It was crazily busy – some 60 or so birders on site – but this included plenty of familiar faces and friends. Despite the gloom, it was a fun watch on Ockley with both the Rustic and Little Buntings showing well, if briefly and sporadically. At one point they sat up together, to the delight of the crowd. A Brambling flew over along with a couple of Crossbills, while 11 Teal, a Raven and eight Woodlarks were also of note.

I met up with Sam again later in the day and walked Shackleford with him and Gabriel. We dipped Peter O’s Black Redstart – and were then gripped by his news of a flyover Brent Goose – but did see some 70 odd Skylarks, six Stonechats and a big female Sparrowhawk. On the pond at Lydling Farm, a Coot was my first since 7 June when the breeding pair dispersed.

Tuesley res was quiet, with a few showy Siskins around the alders, and Thundry Meadows was fairly steady too though we did pick up a flyover Brambling, as well as a Kestrel, 12 Siskins and a Lesser Redpoll. There were no Goosander on Cutt Mill Ponds, and by 3.30 pm fog had rolled back in so we called it a day.

Murky conditions and the lingering north-easterly wind meant waterbodies were the order of the morning. I did a big sweep of Tuesley, Enton, Winkworth and Snowdenham Mill Pond, falling a little short of the notable mark, but still seeing some good bits. The highlight was a Wigeon pair on the mill pond – only my second record of this species at this locale in five years.

Interestingly, Sam had a pair at Broadwater – a site that never gets anything of note – so there was presumably some movement of the species overnight. I even managed to see his birds as they were flying around when I met him at the car park! We then walked Shackleford, where seven Golden Plovers overhead were the best. Interestingly, seven were at Tice’s 10 minutes later and you’d think they were the same. Two Lapwings also bombed through but it was otherwise quiet.

Monday 30th
Thick fog this morning – the type forecast every day since last week but, thankfully, hadn’t yet come to fruition. It was hard to ‘scope Frensham Great Pond but six Pochard, exactly 50 Tufted Duck and a couple of hundred Black-headed Gulls were noted, along with four Crossbills. A flyover Mandarin was, according to eBird, my first at the Great Pond.
A second day of a remarkable influx of White-fronted Geese to south-east England had brought one to Surrey, so I decided to cycle Broadwater Lake and the river on my lunch break. No geese, but at Unstead Water Meadows two Water Rails, two Bullfinches and some 60 Siskins were good value.
Back home, and news of more Surrey White-fronts – including an impressive 18 found by Mark D at Betchworth – saw me throw in the work towel and join Dave on a south-west Surrey wild goose chase. We checked every likely spot but struggled to find any geese full-stop, though our efforts were rewarded close to sunset when, much to our surprise, a Great Egret flew over the A3 at Eashing! The bird, which I make out to only be the eighth for south-west Surrey, had clearly just come off the River Wey and was presumably heading to roost. Very jammy!
Posted by Ed at 10:45