The last week or so has been rather slow. I really dislike this mild, wet and windy weather we seem to be getting more and more during winter – it’s generally poor for birding and isn’t exactly nice to be outside in. It does however mean new habitats appear locally, namely along the Wey where the seasonal floodplains can transform the otherwise quiet river valley into a hot-spot for birds. And during the slow season this means something of a change of scenery, which is never a bad thing.

An overcast and rather mild morning. Some 12 Gadwall were on Snowdenham Mill Pond first thing, along with the dark Red-crested Pochard x Mallard hybrid. I was greeted by two unruly Egyptian Geese at Unstead SF, where the highlight of the session was my first local Cetti’s Warbler since spring. This is possibly the same bird that wintered here last season. It’s favoured patch of scrub has been cut down and it was singing sporadically from back of the South Meadow, a spot it didn’t frequent last winter.

Other bits included two heard-only Water Rails, two Little Egrets over, a small party of Lesser Redpolls and three Chiffchaffs, as well as southbound flocks of Greylag Geese totalling 42 birds. A quick scan of the flash at Trunley Heath Farm produced 13 Teal, 9 of which were displaying drakes. 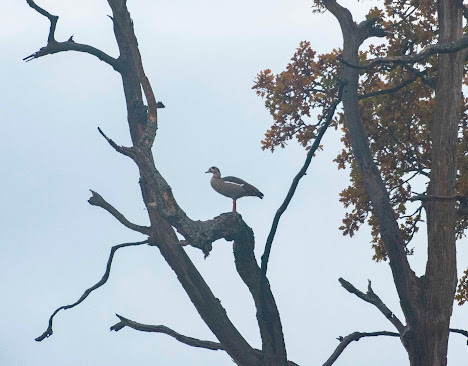 The southerly wind was a little in the east this morning and had picked up, so it was a much chillier start. Shackleford was the main site and a productive loop saw me match by best species haul in one visit (45). Best of all was the continued presence of the Grey Partridges – a rusty-red head of a male was seen sticking out of the alalfa and a couple of calls were heard, before the group of eight were seen in flight a little later on. Interestingly, I thought I heard another, separate bird, calling from the north fields. There must be a good chance this group will stick around for a while …

Other bits included at least two Bramblings buzzing around, a sole Lapwing, 11 Red-legged Partridges, a Chiffchaff, three Stonechats, two Kestrels and a single flock of 40 or so Skylarks flushed up from the north fields. There seemed to be a bit of Stock Dove movement overhead too. Six Teal on the reedy pond at Lydling Farm were my first here this winter. 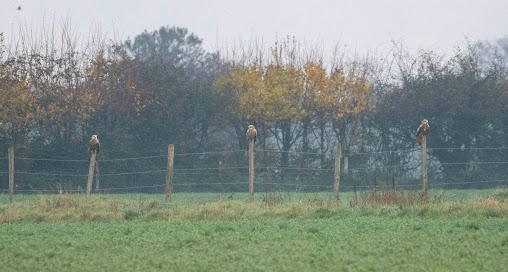 A Raven flew over Peper Harow Park on my way to Weyburn Meadows, where a circuit of the boardwalk produced a female Stonechat, three Bullfinches, a Mandarin, two Lesser Redpolls and a busy flock of 50 or more Siskins.

Another breezy morning with the forecast sunshine taking a good hour or so after dawn to appear. Witley Common was my first port of call. This site seems a little underloved with encroaching birch scrub prevalent across the main ‘heath’. Despite that three Dartford Warblers were seen, though not loads else, with 12 Crossbills, singles of Chiffchaff, Bullfinch and Siskin and six Lesser Redpolls of note.

I then walked Imbhams Farm, near Grayswood, and things had picked up in tandem with the sun’s arrival. The winter crops held good numbers of finches with Linnet the main species – 85 was a conservative guess as to the number of chattering birds there were in the flock. A Brambling was heard a couple of times, along with a Reed Bunting.

Four female-type Teal were on the pond but one was clearly larger and paler than the three other smaller and buffier individuals. Indeed, they were acting rather like a family party ... interestingly this is where I had my latest local spring birds – a pair – on 26 April. Given dabbling ducks' affinities to particularly water bodies around here, I wonder if this was the same female and she’d perhaps nested nearby (maybe even at Thursley, where a pair bred successfully this season).

A walk around Shackleford at the end of the day with Sam was largely uneventful in mild conditions, though it sprang into life after sundown. We had managed the eight Grey Partridges, which were flushed from the set aside along with four of their Red-legged congeners, and when the sun went down the chorus of singing males began with at least three in voice in the alfalfa.

Then, with little light left, a Woodcock flew in from the north and landed in the alfalfa. To our surprise it was joined by a flock of Lapwings which arrived when it was nearly total darkness. These birds obviously use the alfalfa to forage in at night – all rather interesting and probably explains the records of Snipe and Golden Plover recently. To round things off, a Little Owl called briefly from the trees along Hook Lane.

A pretty foul morning – wet, windy and the remaining leaves dropping off trees at rate of knots. I checked out Winkworth Arboretum for the first time in a while. It was quiet, but 12 Little Grebes was a great count and my highest for the site. Three Tufted Duck and six Mandarin were also about. Snowdenham Mill Pond had nine Gadwall and a Shoveler, but Bramley Park Lake was dead.

A late morning scan of the Shackleford gull flock produced five Lesser Black-backed Gulls, before my first ever visit to Enton Lakes – sadly a private site – saw me finally connect with Pochard at a south-west Surrey locale this year away from Frensham. Four (three drakes) were on the main lake which seems rather impressive and undoubtedly gets stuff. Other bits included a Kingfisher and 12 Siskins.

While checking Tuesley the weather closed in and I retuned to the car soaked, having seen nothing of note. On the way out west, a flock of 41 Greylag and 70 Canada Geese were in a stubble field off Suffield Lane, near Puttenham. Waverley Abbey lake held the usual decent Coot numbers (31) and Frensham Great Pond had seven Pochard (two females).

After heavy rain overnight, the morning continued in the same manner – I didn’t venture out until an unexpected break in the conditions late morning. Driving past the Lammas Lands, where three Little Egrets were feeding, I was surprised to see there had been some considerable flooding for this early in the season. Upon arrival at Hankley Common I was amazed at the volume of cars. In total I counted 74 vehicles. If each car had two people then there were some 148 out on the common, although realistically there would have been more than 200, with plenty of dogs to boot …

Plan B was quickly hatched and the pleasingly Wreccelsham Water Meadows was virtually devoid of people. An hour’s walk around the floodplains (where possible) at Wey Bank Farm and Willey Mill produced a Little Egret, two Stonechats, a Bullfinch, two Siskins and – that uncommonest of south-west Surrey birds – Wigeon. Some 54 were tallied up; presumably these had been flooded out of nearby Tice’s Meadow. I’ve seen Wigeon nowhere else locally this year and indeed average about two a year around these parts. But, when it floods at Wrecclesham, they’re guaranteed. 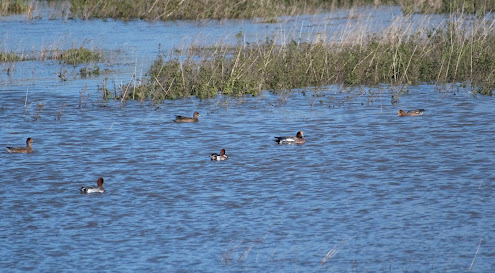 A Little Egret was on the floods south-east of Frensham village, while an outrageously busy Frensham Great Pond didn’t seem to deter the Aythya flock from relaxing close to the shore by the hotel. Here, among 46 Tufted Duck, were 11 Pochard – my first local double-figure count of the species this season.

The first of two days off. With little realistic year list targets left and the weather very uninspiring I was lacking ideas, so plumped for Shackleford first thing. It was rather bleak in terms of birds – one Raven highlighted over the main fields, though a wander around the shooting crops to the west were better with two Yellowhammers amid a small mixed finch / bunting flock that also included five Lesser Redpolls. A Chiffchaff was in a nearby hawthorn hedge.

I had enough energy to stakeout an amazingly busy Frensham Little Pond at dusk in the hope of a Bittern. Like all my first winter period efforts, though, I drew a blank, but four each of Water Rail and Little Egret (the latter seemingly into roost), two Firecrests, a Kingfisher and at least 100 Pied Wagtails into the reedbed were pleasant enough.

Determined – or foolish – I was back at the Little Pond at first light. Again there was no Bittern, and the cast of other birds were similar to yesterday including the four Little Egrets departing their roost. Six Crossbills flew over too. The Great Pond was similarly ‘as you were’, with 10 Pochard roosting off the hotel. The water levels were receding at the next stop, Wrecclesham, but 32 Wigeon were still about and three Mute Swans were present as well.

After the enjoyable session yesterday I again visited the water meadows along the Wey from Farncombe to Peasmarsh, where the mega floodplain on each side of Tilthams Corner Road was still bustling with birds. These included some 300 Black-headed Gulls (and a handful of Commons and Herrings), 160 Canada Geese, no fewer than 18 Egyptian Geese, a Lapwing and an impressive seven Little Egrets together in one damp field. Cattle Egret has to be a shout here soon … 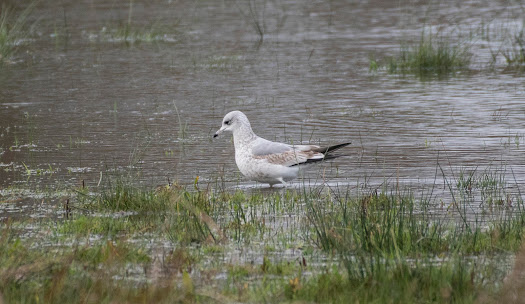 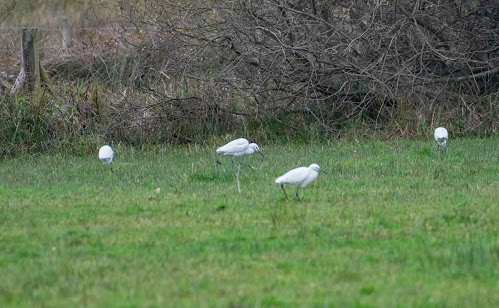 A Gadwall pair on the deep water by Upper Unstead Farm were my first here. This floodplain never seems to get loads of wildfowl in – I think its narrow shape and wood-fringed border perhaps puts off species like Wigeon. It is nevertheless an impressive spectacle when it floods, and should a cold spell ever follow heavy rainfall you get the feeling it could draw in something really special.