An arrival of warm weather, an end to the European Championships and a few days off work has meant I’ve been out and about a fair bit during the last 10 days. I was supposed to be in the French Alps the week after the Euros, but unfortunately that plan dissolved a while ago. However, I’ve filled the time with a mish-mash of birding and butterfly ventures and, to be honest, it’s been quite fun.

It was third time lucky with the Black-browed Albatross, which was flying around the cliffs at Bempton upon by arrival not long before 7.30 pm. It did a few circuits before eventually landing in among area of presumed non-breeding Gannets, where it bedded down for the night. We struggled to pull ourselves away from this awe-inspiring beast – it was absolutely huge, dwarfing the Gannets, with dark black upperparts, peachy-orange bill, prominent 'eye shadow' and fleshy legs all seen. 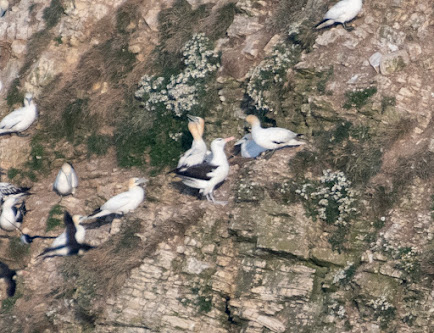 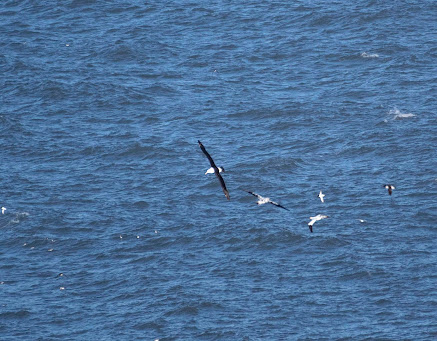 This individual, an adult, has been present this year on and off since 28 June, the third summer it's visited Bempton following much briefer stop-offs in 2017 and 2020. Albatrosses are iconic birds and I’d not previously seen one anywhere, and Black-browed is one of the most desirable species on the British list. In all, a wonderful animal and at a glorious location. This will go down as one of the – if not my outright – best birds I’ve seen in Britain.

I wasn’t paying too much attention to other birds, but Oystercatcher and Yellowhammer were new species for me at this site (thanks eBird!). In Bridlington later in the evening, it was nice to see a small colony of Kittiwakes on a building in the town centre near Cliff Road.

We couldn’t resist another look at the albatross early in the morning. Compared to the sunshine of last night things were quite different, with a stiff north-westerly and fog. However, I still ogled at the bird for a good 45 minutes as it sat on the cliff, in a slightly different spot to last night. A Rock Pipit was also of note before we departed.

Somehow during my birding life I’ve never visited the Spurn peninsula. Being so close, we figured it made sense to take a look. On the way, between East End and Winestead, a male Marsh Harrier was quartering a crop field. Upon arriving at the tip of the peninsula, I chose to spend time at Kilnsea Wetlands, which was a cracking site. Among the highlights were four Spoonbills, including one showy adult. These were only my fifth Spoonbills in Britain (still need for Surrey!), but the most cooperative for sure. 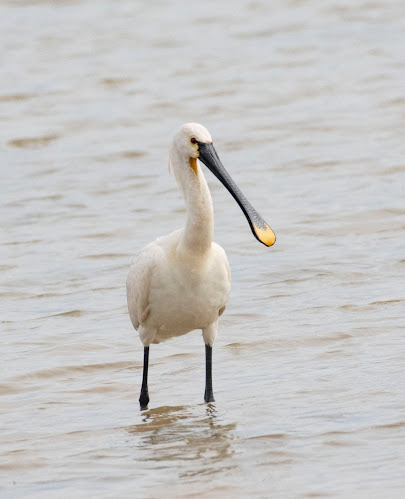 An unseasonal drake Scaup was knocking about, as well as some 24 Little Gulls – all adults, and looking very smart too. An adult Mediterranean Gull also flew through, a decent bird here (confirmed by the reaction of locals!). Other bits included two Dunlin, 50 Ringed Plovers, 35 Redshank (all adults), 30 or more Little Terns, one Pochard, two female Teal with ducklings, a couple of Yellow Wagtails, some recently fledged Reed Warblers. Not bad, and some minor consolation for not being in France this week … 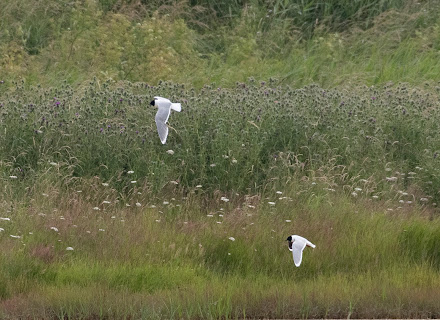 On the way back north, another – or the same – male Marsh Harrier was quartering near Patrington. A pit-stop to get better views also produced a heard-only Corn Bunting, Yellowhammer and Tree Sparrows.

It was warm and bright at Tuesley early on, where a Tufted Duck with six small ducklings was a surprise – she must have walked them here from wherever the nest was! A noisy Common Tern juvenile was probably born at Enton. A female Kestrel flew over and an adult Lesser Black-backed Gull dropped in. 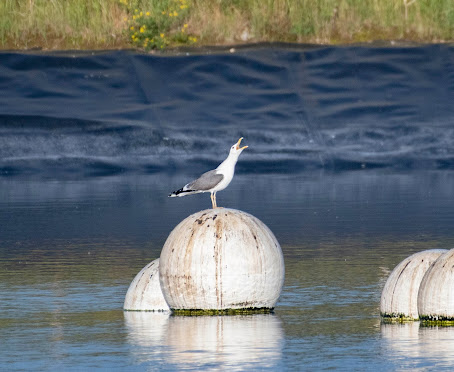 I was about to leave, when I heard a familiar tyeu tyeu tyeu from the blue skies above. Eventually I saw the elegant shape of a Greenshank circling over the water. It flew around a bit, landed on the west side and took off again, before settling at the east end. It clearly wasn’t happy, though, and soon bombed high south-west … what a stunner – Greenshanks are one of my favourite waders and this little slice of migration in action was a fine example of what local birding is all about. 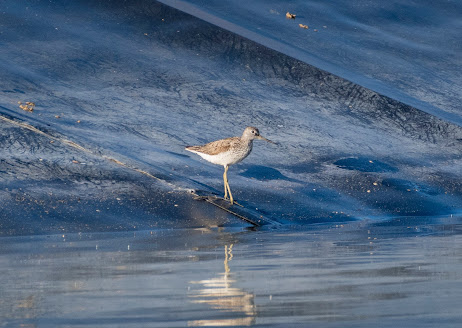 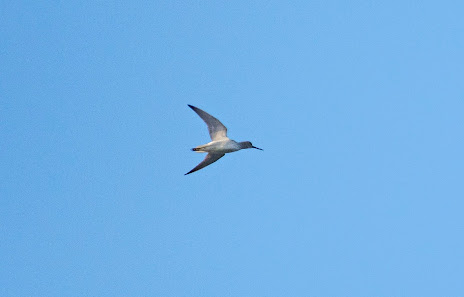 I then headed to Shackleford, a site I hadn’t visited for just over a month. A couple of Ring-necked Parakeets were in the village, but these were severely outclassed by another introduced species: Little Owl. Three, to be precise, an adult pair and a well-developed juvenile. This species has become so elusive locally in recent years, so proof of breeding was pleasing. 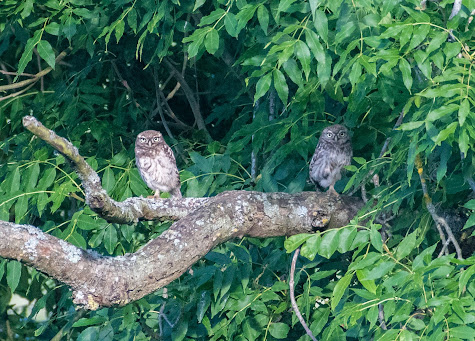 Other bits included a Garden Warbler (rare here) in one of the margins, young Whitethroats and Skylarks, a Red-legged Partridge and three Red Kites.

Later in the morning, we headed to Knepp. It was my first visit since 2016 and the place was a lot more ‘professional’ looking now, with crowds to boot. Butterflies were on the agenda and we scored at least 10 Purple Emperors, though views were generally suboptimal in the breezy north-westerly. Some 11 other species included my first Gatekeeper of the year. 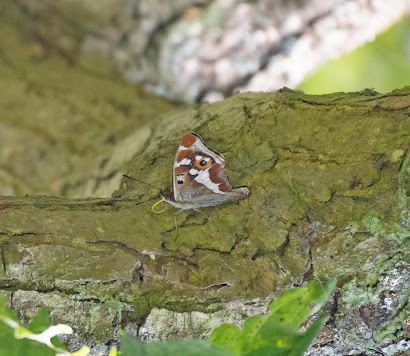 Unsurprisingly for a hot, middle of the day walk in mid-July, bird activity was at a premium. Singles of Nightingale and Garden Warbler were heard calling, a Kingfisher, two Reed Warblers and a Great Crested Grebe family were on the Hammer Pond, a Little Owl was vocalising near the visitor centre and nine White Storks – the flagship, introduced species here – included three juveniles on a nest. Indeed, with the storks flying around, the heat and the wild, untamed landscape, it felt for a short while like I was somewhere in south-east Europe.

In the afternoon at my parents in Felpham, two Mediterranean Gulls flew over the garden. Nearby at my grandparents’ later on, a male Sparrowhawk was cruising around.

I met with Steve this morning to try out Shackleford for some ringing. We set up two nets and, during a three-hour session, caught 14 birds. These included juvenile Chiffchaff and Whitethroat and three Goldfinches. Other bits noted included two of yesterday’s Little Owls, two smart juvenile Kestrels, a Red-legged Partridge and two Bullfinches. A family party of Weasels was a real surprise and very nice to see, while butterfly action included Painted Lady, Small Tortoiseshell and Marbled White. 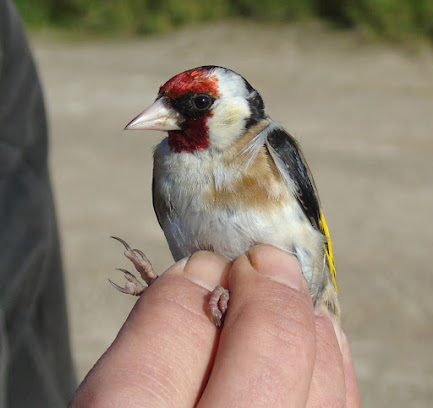 The first Common Sandpiper of the autumn was at Tuesley early on, some nine days later than last year. The young Common Tern and Tufted Duck family were still about, too. Afterwards, a tranquil walk of Unstead Water Meadows was fairly quiet, though my first Garden Warbler at this site this year was in song along the tow path. Other bits included two Reed Warblers, a family party of Swallows, a singing Reed Bunting and two Swifts.

Later in the day, we walked a 12 km circuit of the Chidham peninsula in the hot middle of the day period. Birding was a casual affair on this walk but I still noted a decent 52 species, including an adult Yellow-legged Gull in the Cutmill Creek roost. I have had a few juvenile YLGs here down the years, but in fact today there was not a single first-year large gull of any species. 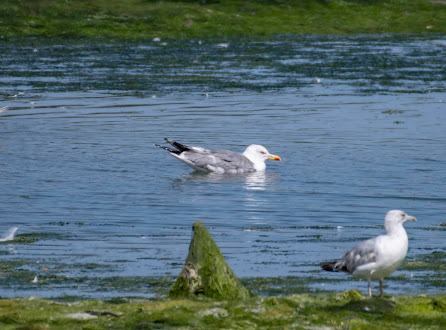 Other bits included four Whimbrel, seven Dunlin, 60 Curlew, a family party of Shelduck, three Yellowhammers, a male Sparrowhawk and, rather bizarrely, a Black Swan, in with 44 of its Mute congeners.

I was pleased to note juvenile House Martins on the wing over Farncombe in the morning.

A hot day working from home was punctuated by a vocal flyover Red Kite at midday.

It was already warm at Tuesley by 6.20 am, where I was surprised to see a juvenile Lapwing on the far shore. This is pretty much a rarity here now – gone are the four-figure flocks I used to see in the big fields during winter lifts to school in the mid-2000s; this is in fact my first record here since those days. It’s been quite a poor year for Lapwing locally but, impressively, it’s my 10th wader species at Tuesley this year ...

Only my third-ever Tuesley Kingfisher was a surprise as it zipped through – presumably from Busbridge Lakes. Other bits included the female Tufted Duck, who had lost one duckling and a Swallow being mobbed by a Pied Wagtail.

I got to Unstead SF for the July WeBS count early on to avoid another hot morning. It was relatively quiet – a young Black-headed Gull (the first breeding at this site) and a family of Little Grebes were on Dry Lagoon, with a Reed Warbler and juvenile Kestrel lurking nearby. Two Mandarin were on Flooded Field, where a Kingfisher flew up the Wey.

In the evening, Abel and I headed to the ARC section of Witley Common for some Nightjar action. They delivered in style - at least six birds, including four churring and wing-clapping males, and two females. We enjoyed a series of close fly-bys, including two that flew over the nearly full moon, creating a truly atmospheric image. Epic stuff.

A lunchtime walk across the Lammas Lands produced heaps of Whitethroats – at least 12, including many juveniles. It’s clearly been a great breeding season for them here. Three or more Reed Buntings were about and included one juvenile, a male Stonechat was kicking about and a Kingfisher flew upriver.

I’ve managed to chalk off a few rare breeder goals in recent years – find a Goshawk pair, locate a Lesser Spotted Woodpecker nest hole etc. Finding a pair of Honey Buzzards is another level up and has taken up a fair bit of my time this year. Of course, this species needs the greatest level of protection and so I have to be vague (indeed I don’t mention my honey efforts too much). Below are some shots of summer HB action, including a few from the past 10 days. 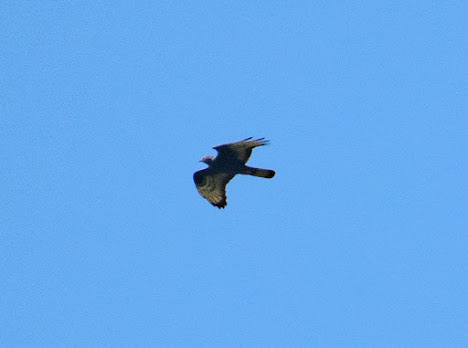 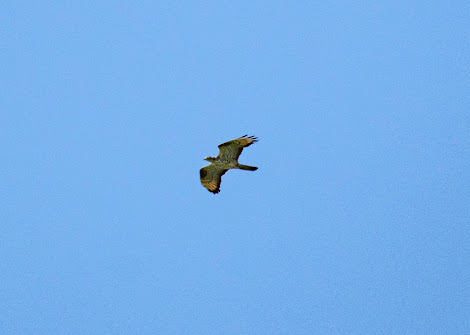 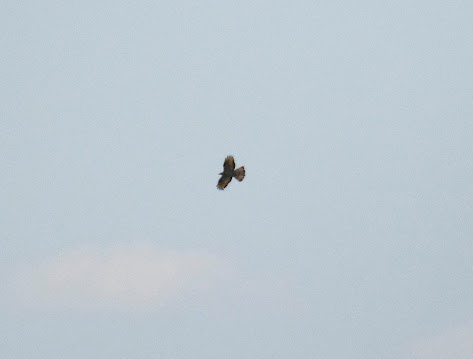 Grasshopper Warbler was a shock breeding discovery locally in 2019. Unfortunately, this year the male seemed to be unpaired and is thought to have abandoned efforts in early June. So, I was most surprised to locate a reeling male at a different site recently. I followed this up and discovered at least one juvenile too, confirming breeding.

If, for me, 2020 was about rare local birds, 2021 has been about rare local breeding species. It’s been great fun and is a form of birding I hope to pursue for many years. There is much that we don’t know about rare and elusive breeders, which can be right under our noses!