August has arrived, and with it the first moments of autumn excitement. So far, the weather has largely followed that of the rest of the summer: wet and cool. But this month always seems to deliver. Despite such an unsettled year, during which the seasons have been so atypical, the start to August 2021 has still managed to conjure up that annual feeling of never knowing what you might bump into when in the field.

With the arrival of perhaps my favourite month of the local birding year, I was up and at 'em this morning. I headed to Tuesley first, where the young Mediterranean Gull had made it into August. Thursley was up next and here, after two and a bit hours on site, my earlier enthusiasm was a little quashed – it was slow going indeed, with only 36 species logged under dull, grey skies.

Decent numbers of Green Woodpecker (seven) and Jay (eight), as well as a female Moorhen with four small chicks, highlighted. The former two species peak at this time of year, with juveniles out of the nest and making lots of noise. Two Kestrels, a juvenile Sparrowhawk, six Swifts, a Bullfinch and a flyover Snipe were also seen.

I checked Shackleford afterwards to see if yesterday's Grasshopper Warbler was still about, but it wasn't. The cut northern fields held some birds, including 78 Canada and nine Greylag Geese, 350 or more Starlings and a couple of Reed Buntings. Two Red-legged Partridges were in the alfalfa and an adult Little Owl sat out for a bit.

After another night of rain, the north-easterly produced a thick fog early on. The dewy grass and poor visibility at Tuesley made it feel like October. Again, no waders, but the Mediterranean Gull was still about, along with an unwell Black-headed Gull. It was silver-ringed, interestingly, but I couldn’t derive the full code. The farm manager arranged for it to be rescued but, sadly, it perished. The grim reality of a wet and cold summer that will have impacted many young birds …

Later on I checked the Grasshopper Warbler breeding site I located recently. I could only find an adult and I'd bet that the juveniles have already moved on.

A male and female Tawny Owl were heard duetting from the bedroom window in the small hours of the morning. At Tuesley, which again was misty, damp and rather lifeless, the Mediterranean Gull hung on.

I headed to Frensham Great Pond afterwards. Some 25 Great Crested Grebes was a personal high count for this site and indeed seems to be a decent tally for here. Surprisingly, they were all adults – some sort of passage of inland breeder heading to coastal wintering sites? A juvenile Sparrowhawk was heard begging from within a pine woodland to the south, three Common Terns were about and a few Sand Martins were hawking over the water. A roadside Muntjac was seen nearby.

A distant yaffling Green Woodpecker woke me up this morning – a long overdue first for my from home list. I met with Steve for another ringing session at Shackleford later on. Sadly, the margins were cut a few days ago to rid the ragwort. A real shame – these were three years in the making – and we have lost our key ringing spot as a result. Unsurprisingly it wasn’t as productive, with a couple of Whitethroats and a Chiffchaff highlighting in the nets.

The usual Little Owl pair were seen and another was vocalising to the north, suggesting there are in fact two pairs on site. Two juvenile Stonechats were my first at the Love Shack this autumn, the young Reed Buntings were still about and two each of Raven and Egyptian Goose flew south (the latter is scarce here, this being my second 2021 record). A Grey Wagtail was also of note and too was my first here since January.

Three noisy northbound Ring-necked Parakeets including one bird missing a tail. The session peaked at the end, with a beauty of a juvenile Willow Warbler that alighted on the big barn roof, before proceeding to catch insect prey. 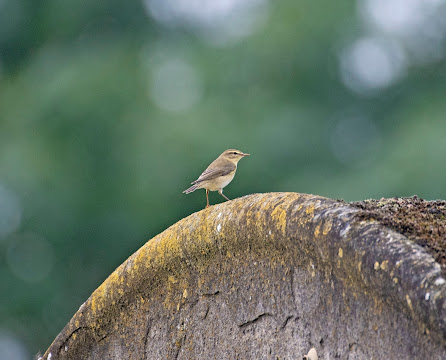 Another autumnal morning, with light mist and heavy dew greeting me at Tuesley, where I was in for a shock – a juvenile Goldeneye on the far side! A totally nuts occurrence but there it was, wary, fully-winged and unringed. There are wildfowl collections nearby so I was a bit uncertain, but there were no signs of it being an escape and it’s worth considering the weather – this spell of north-easterlies has produced bizarre records, such as Purple Sandpiper in Oxfordshire. In the Midlands, the first returning Goldeneye were logged in recent days and, by bizarre coincidence, my colleague had his earliest ever on his south Lincolnshire patch later on today. For now, though, innocent until proven guilty ... 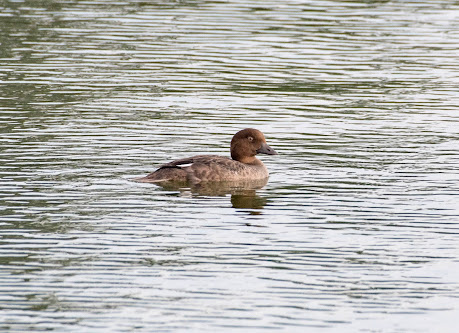 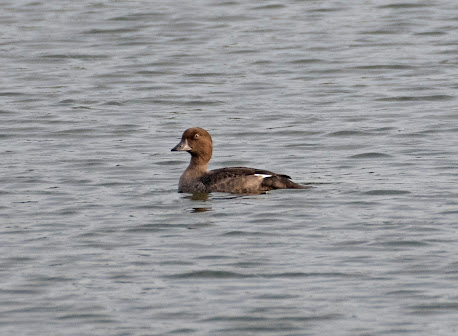 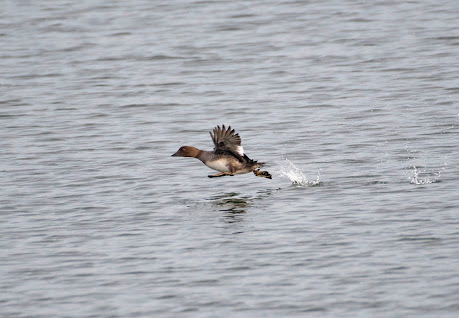 I enjoyed this charming little duck for a while, aged by the dark neck and eye. It called once or twice and seemed content, so I left it be. A first for Tuesley (unsurprisingly) and a real hard bird locally these days, this being only the third in the last four years. My earlier 2021 record was similarly odd, coming at the end of April at Frensham. This surprise was a welcome reminder of how fun August can be locally. It also papered over the cracks of another wader-less visit here!

I then did an hour at Thursley, where it was far mistier. Much more typical August content was to be found, including three Sand Martins over Pudmore and two mobile Green Sandpipers. A big female Sparrowhawk perched briefly on Shrike Hill, but otherwise things were quiet.

A windy south-westerly and low, heavy cloud at Tuesley felt promising. At 6.25 am, my eye caught a large form going over and away from me. It was a Numenius species but from behind wasn’t identifiable. Eventually it banked, revealing a long bill: a Curlew. No doubt the high water levels deterred it from dropping in, even though it appeared to have a look. Away from Thursley, Curlew is increasingly rare in south-west Surrey and I average about one a year. 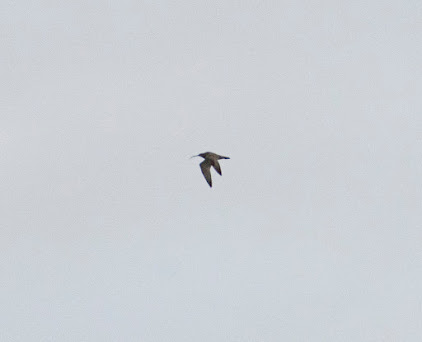 On the water, the juvenile Goldeneye was still present, nervy but diving often as it was yesterday. A Hobby overhead was my first here this year and a Cormorant that flew south was, amazingly, my first locally for two months. A Sand Martin, two Kestrels and a Common Tern were also noted. A lively session typical of August ... 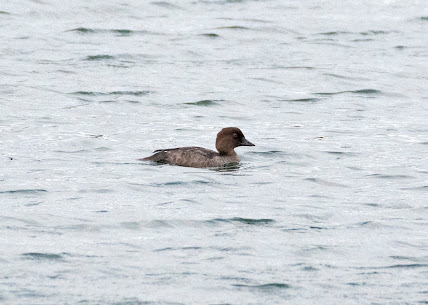 Later on elsewhere, a sudden eruption of Woodpigeons and cacophony of corvids indicated the presence of an apex predator. Soon enough, a big juvenile Goshawk appeared in the distance, to the angst of pretty much every bird in the landscape. It was mobbed by four Kestrels, two Hobbies and a Sparrowhawk – the below series of images shows it tussling with the latter species, highlighting the impressive size difference between these two Accipiters – before it melted away. 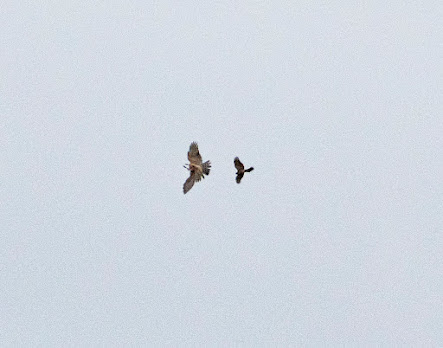 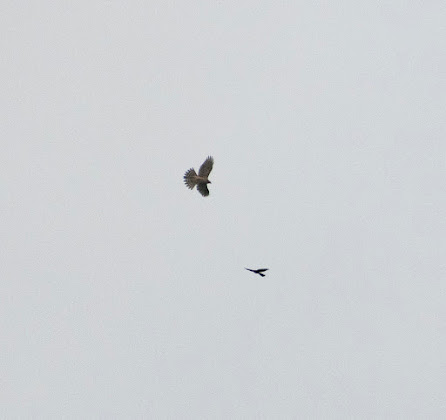 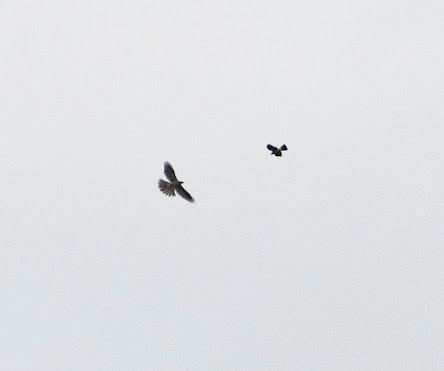 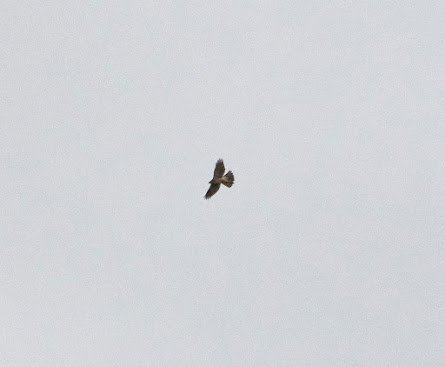 Torrential rain and a stiff southerly wind smacked of waders, so I headed to Tuesley and sought shelter. The lingering Goldeneye was still about, while a few Sand Martins had collected over the water. To my astonishment, at 6.38 am, a tight, fast-flying flock of small waders appeared to the west. They flew over the reservoir, banked and then disappeared south – an incredibly quick encounter.

My wader game isn’t my strongest and I was a bit miffed. I didn’t really rate them as Dunlin – the most reasonable option. The broad white wingbars were particularly prominent in flight, along with the clean underparts, suggesting it wasn’t said more likely species (though a Dunlin flock that size would still be crazy). Thankfully I managed to get some (very) low-quality shots, enough to confirm them – after consultation with various wader gurus – as Sanderling, with the count a mighty 34! 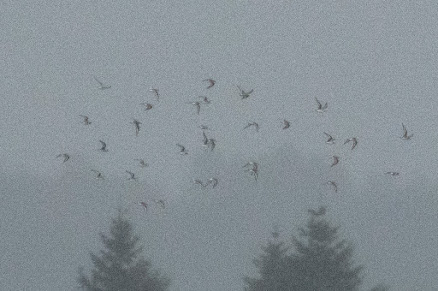 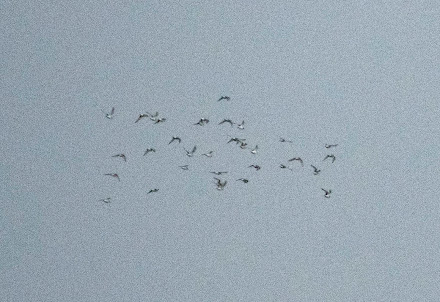 A truly mind-blowing record and, as I later found out, a Surrey record count. I’d been bemoaning a lack of waders here recently, so 34 of a scarce inland species more than made up for the previous blank visits. It just shows what's moving over our skies and how crucial inclement weather is in detecting such things. I staked it out a bit longer but only a juvenile Herring Gull was of note.

Afterwards, I thought I’d try my luck at Frensham Great Pond in case a scarce tern had dropped in. Almost as soon as I arrived I heard the manic call of an Oystercatcher before eventually picking it up, heading west. It banked and flew south over my head – annoyingly my camera was in the car. Still, a Frensham first for me and always a tricky bird to connect with locally (this being my first of the year). A truly memorable morning and the type you plough local sites all year for. It’s always nice when twitching the weather pays off, too.

A strong south-westerly was blowing this morning but the sun was out, making for a fun walk around Shackleford until the rain rolled in. Pick of the bunch was a juvenile Sedge Warbler in one of the margins – a Shackleford first, no less. It was quite elusive, but occasionally broke cover, allowing for some shots. This is a highly localised south-west Surrey bird, restricted to just a couple of sites along the Wey between Farncombe and Shalford. I see few away from these spots on passage (typically less than annual). 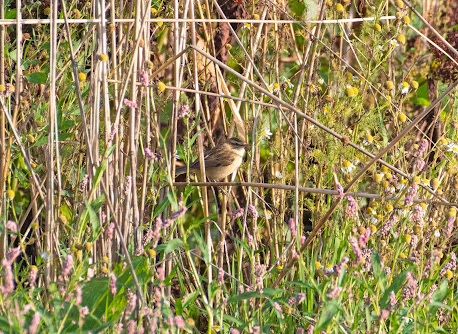 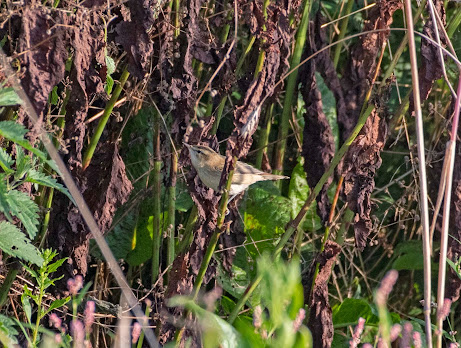 Two juvenile Stonechats were also about as well as good numbers of Chiffchaff and Whitethroat. Other bits included two Grey Herons inspecting the recently formed large puddles in the fields, singles of Reed Bunting and Red-legged Partridge and two recently fledged Linnets.

A quick look at Tuesley in the morning rain was quiet. A few Swifts headed east and there was no sign of the Goldeneye, which has presumably moved on.