I missed the succession of storms that battered Britain in mid-February, although the end of the month has still had a largely breezy and westerly theme. This has meant local birding during the last seven days has been steady. March beckons though, and with it spring excitement …

Up to 20 Mandarin flew north over the garden at dusk.

It was bright and frosty at Frensham this morning, where 44 species were noted in an hour-long session. Three each of Shoveler and Pochard were on the Great Pond, where two Water Rails were calling from the eastern reedbed. Marsh Tit, Kingfisher and two Firecrests were noted near the Outlet Pond.

A Red-legged Partridge at Eashing Farm and a Little Egret over Godalming were noted en route to the Lammas Lands, where a sunny and chilly morning greeted me. Water levels were the highest they've been this winter but Snipe numbers were still low, with a mere six noted. Eight Reed Buntings was a good total and two each of Stonechat and Grey Wagtail were also seen.

Unstead Water Meadows was quiet, with the highlight a singing Skylark over Upper Unstead Farm – only my second here and the first I've had in song. Other bits included singles of Little Egret and Reed Bunting and an interacting Kestrel pair.

I was able to do a walk along the river mid-afternoon, by which time it was veritably spring-like. A displaying pair of Buzzards and a male Kestrel were eclipsed by a Peregrine soaring over Greenways Farm – a nice surprise so close to home. A Bullfinch pair, a singing Grey Wagtail, two Red-legged Partridges and a flyover Linnet were also noted.

Despite the sunny forecast the dreaded 'Thursley mist' caught me out this morning, and a two-hour session was spent with poor visibility and a chilly frost. As a result, 44 species wasn't bad and included 14 Egyptian Geese on Pudmore – possibly a new record count for Thursley. Three Water Rails (including two singing males), a Snipe and a Tufted Duck pair were also noted here. Despite the conditions a few signs of spring could be detected, including a Great Crested Grebe back on Forked Pond and an increase in Stonechats (with some males in song).

A bright but cold and windy morning. Despite the conditions, a dawn check of Tuesley produced the first proper moment of spring migration. First, a group of Lesser Black-backed Gulls cruised north-east – a species virtually absent locally in the winter. Then, the familiar call of a Curlew was heard multiple times as an unseen bird moved in a northward direction. A lovely little spell and a nice early start to wader migration here.

I then walked Enton Lakes, where a decent selection of waterbirds included four Gadwall, a single drake Pochard and a flyover Kingfisher. A group of six Lesser Redpolls were in a mixed Siskin and Goldfinch flock at the north end.

Later on some decent Goshawk action included a displaying pair and a nearby juvenile whose presence didn't seem to bother the adult birds.

I'm not long back from 10 days in south-east Brazil, where I birded the Atlantic Rainforest in Rio de Janeiro and São Paulo states. The trip was a fantastic success with no fewer than 312 species logged, including 84 Atlantic Rainforest endemics amid a wonderful suite of neotropical birds.

Featuring prominently on the highlights reel were mega localised bits such as Black-hooded Antwren, Three-toed Jacamar and Grey-winged and Shrike-like Cotingas, with 20 tanager and 16 hummingbird species also recorded. I'll endeavour to do a photo diary at some point when I get the time.

Spring seems to begin earlier every year these days. The start to February has, largely, been mild with settled weather and a distinct lack of wintry vibes – in fact for the most part it's felt like early March. Numerous birds are in song most mornings, Snowdrops have emerged in force locally and I've seen more than one butterfly on the wing. It's always nice when spring starts, but given it's part of a wider disconcerting picture I feel like it can't be enjoyed as fully as it should.

I ventured out of south-west Surrey for the first time this year as Matt, Robin and I headed to West Sussex for the day. Pagham Harbour was our first and main destination, and we started at Church Norton where a cold, windy morning slowly brightened up. A scan of the harbour produced the usual massed ranks of wildfowl and waders, with hundreds of Brent Geese, Dunlin and Grey Plovers noted, as well as smaller numbers of Pintail. Singles of Whimbrel and Kittiwake were unexpected and a Peregrine shot through as well. 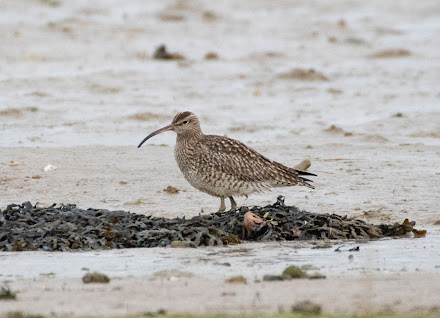 A scan off Church Norton Spit was slow going but eventually delivered some quality, chiefly in the form of a Red-necked Grebe that's been present here since December. At least six Slavonian Grebes were also about, as well as a handful of Razorbills, Gannets, Mediterranean Gulls and Red-breasted Merganser. We then headed to Selsey Bill, where a Norwegian-ringed Turnstone highlighted, before checking the Sidlesham Ferry area. It was quiet, with a few Avocets and Black-tailed Godwits of note on Ferry Pool and a couple of Chiffchaffs near Ferry Long Pool.

We then headed up to Burpham for early afternoon, by which time the sun was fully out. A Red Admiral on the wing and some 10 Chiffchaffs around the sewage works provided some real spring feelings, though the herd of 15 Bewick's Swans on the water meadow contradicted this. It was great to see such big (modern-day) numbers – the last time I saw more in the Arun Valley was over eight years ago – with three juveniles especially pleasing to note.

We then staked out The Triangle at The Burgh for a while, scoring lots of raptors (including Marsh Harrier and Peregrine), a few Ravens, a flyover Lapwing, 100 Linnets and a singing Grey Partridge. A quick check from Offham viewpoint then produced better views of the swans, as well as two Cattle Egrets and a further two Marsh Harriers.

We ended the day at Burton Mill Pond, where the best bird was a Hawfinch flying over, tailing a group of Chaffinches. There were plenty of other good bits from a decent 50-species innings, including a hunting Great Egret, four Cattle Egrets to roost, a young Peregrine, three Water Rails, two Kingfishers and a Firecrest. In total we logged 100 species without really trying, making for an excellent away day.

I walked the river this morning, managing 46 species by the time I was home – my best total yet. At least three Bramblings in with a large Chaffinch flock at A3 Fields was unexpected. Although it's an excellent winter for this species I thought I'd struggle to get any in my 1 km, but this is my second record of the year. Four Red-legged Partridges were also here and a Skylark flew over. Other bits included Marsh Tit, eight Mandarin, Kestrel, two Grey Wagtails and five Bullfinches. 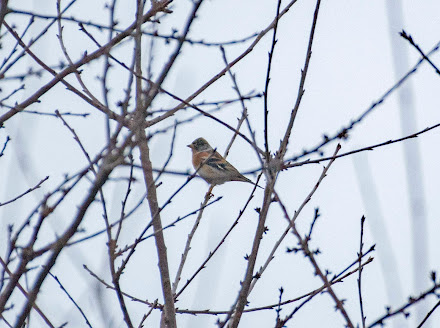 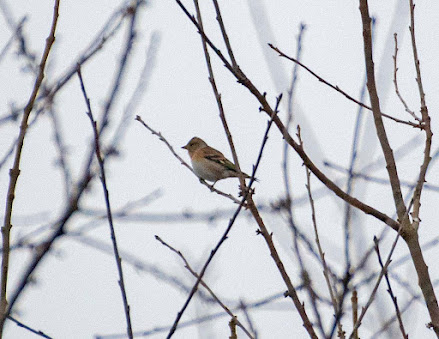 Later on, a singing Skylark to the south represented a smart garden tick.

It was bright and frosty at Thursley this morning, where I met Dave for a two-hour wander. It was proving be a very quiet session – typical of this winter here – until a brilliant 60-second period at the top of Ockley. First, a Greenfinch flew south while calling. This is a scarce bird at Thursley with my last record nearly a year ago.

This was followed immediately by a far greater surprise: a Golden Plover dashing low west, before dropping down between Spur Wood and Pine Island. This is a rarity here (the second in the last six years) and to see one on the deck, according to Dave, is exceptional. We were both suitably pleased with this classic Thursley performance – lengthy spells of nothing followed by a mad minute of excitement!

Other bits among a relatively poor total of 32 species included three Egyptian Geese, a Kestrel, six Woodlarks, five Dartford Warblers, three Lesser Redpolls and a decent-sized flock of 50 or more Reed Buntings. Meadow Pipit numbers were paltry – a measly five was our estimate.

Later on, four Ravens were enjoying the bright and breezy conditions near Thorncombe Street. It won't be long until this species gets down to nesting. 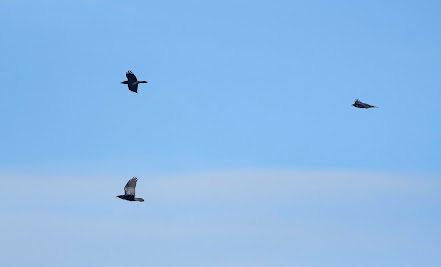 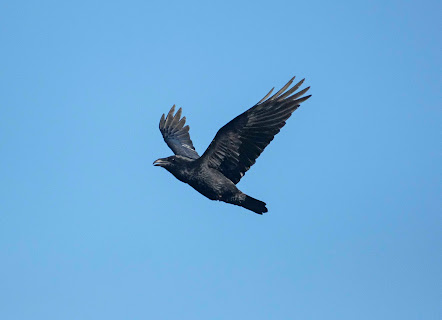 It was wet and windy at Frensham Great Pond in the morning, where things were very quiet. One of the smallest Cormorants I've ever seen briefly added some excitement to proceedings, but the best bits were a calling Chiffchaff on the southern side and 10 Pochard off the hotel.

I walked Eashing Fields first thing, with a light frost on the ground. A Firecrest in ivy-clad trees towards the south end was a surprise, while other bits included a Mandarin pair over, at least 10 Skylarks (including two in song), a small Linnet flock, the Stonechat pair and 20 Meadow Pipits.

In the evening Jeremy and I did a thermal imaging session, but prior to that a stunning Barn Owl flew low over Eashing Bridge in the headlights – a wonderful 1 km addition and special to see so close to home. Vocalising Little and Tawny Owls greeted us at Shackleford, making it a very rare local 'three-owl' day. We failed to ring any Woodcock but an impressive 10 or more were feeding in and around the fields, along with singles of Lapwing and Snipe.

It was grey and flat at Chiddingfold Forest this morning, with the low species list of 25 mimicking the conditions. Three Marsh Tits and a flock of 30 Lesser Redpolls were the best, the latter my biggest local count of a poor winter for this species.

Another spring-like morning, with blue skies and a mild south-westerly at Shackleford. Skylark song filled the air for the first time here this year, while five Lesser Black-backed Gulls (only my second 2022 record locally) and a display-flighting Blue Tit added to the unseasonal vibes. Other bits included 30 Linnets, a female Kestrel and two Stonechats. 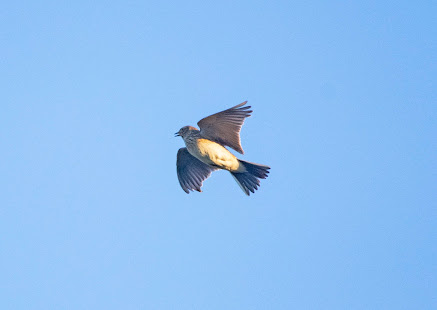 Garden observations later in the day included an unexpected Red-legged Partridge, a male Bullfinch, an interacting pair of Grey Wagtails and a Skylark singing to the south.

Frensham Great Pond held no surprises this morning, with four Pochard and 37 Tufted Duck counted. There was more variety at Cutt Mill afterwards, where two pairs of Gadwall, 11 Shoveler, 32 Mandarin and a drake and redhead Goosander were on the house pond.