The second half of June has been typical of the quiet high summer period, amid a mixed spell of very warm conditions and more unsettled, westerly-led weather. A few faint hints of autumn have been detected in recent days, however, as the seemingly never-ending migration cycles trundle on. Breeding action is peaking too, with young birds everywhere at this time of year.

At the end of a hot day I joined Dave for a dusk walk of Thursley. In total we counted 10 Nightjars – eight churring males and two calling females – across a small part of the site. A Woodcock was roding over Will Reeds (where a female Tawny Owl was calling), a Snipe was singing on South Bog and the Curlew pair were still anxiously tending to their young.

The highlight came at Pudmore, however: a nervous Teal pair with 10 tiny ducklings. This is the third year in a row breeding has been confirmed here but only the fifth time since the Millennium (five of the eight Teal breeding records in Surrey since 2000 have been at Thursley). Very cool. 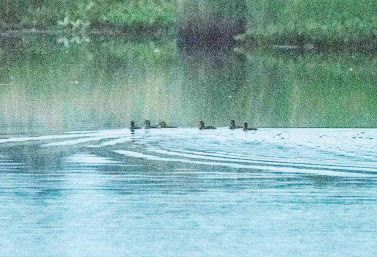 A warm midsummer evening saw me venture into West Sussex, where I was treated to wonderful views of a juvenile Long-eared Owl at dusk. A second youngster called nearby, while an adult was seen briefly in flight. A special encounter. Hobby and Lesser Whitethroat were also noted. 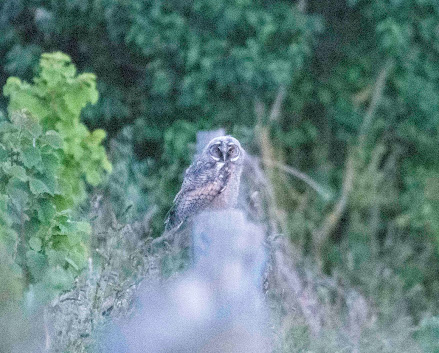 This morning's WeBS count at the Bramley waterbodies was quiet, though three young Ravens were noted just down the road at Thorncombe Street.

On the morning of the Summer Solstice I was up early and headed to Thursley, which unfortunately was misty and rather cool. The Curlew pair were still collecting food in the vicinity of Pine Island / West Bog and were in constant communication. A Snipe briefly displaying and a surprise Muntjac was at Truxford.

It was warm and sunny by the time I finished work, and a late afternoon stroll along the river produced both Garden Warbler and Grey Wagtail taking food into nests.

Another subsinging Reed Warbler at Shackleford was a surprise this morning – only the third ever here, but my second this month (and exactly two years to the day of the only other occurrence). Also noted was a single Little Owl, two Red-legged Partridges and the Stonechat pair – the latter without their young, perhaps now dispersed.

What will surely be my last singing Cuckoo of the year was heard at The Hurtwood this morning, where a gentle westerly breeze was blowing through. Garden Warbler and Siskin were also noted. Unfortunately I saw no Woodlarks, Tree Pipits or Dartford Warblers and I suspect these species are gone from here now (having only colonised in 2019) – such is the brevity of forestry plantation clear-fell habitat.

A small flock of Swifts and hirundines were zipping over Tuesley this morning in the breezy south-westerly, with two juvenile Sand Martins among them. This species doesn’t breed anywhere locally and these individuals felt like my first subtle hint of autumn so far this year … I counted 23 juvenile Black-headed Gulls too. 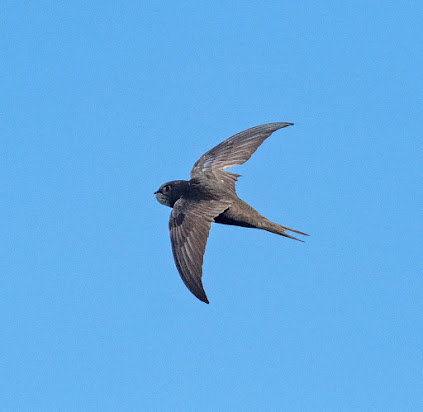 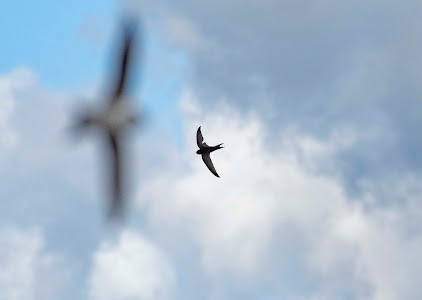 A much larger hirundine and Swift build-up was noted at Frensham Great Pond afterwards, where I counted 93 Coots.

At the Lammas Lands this morning a juvenile Sedge Warbler on Catteshall Meadow was welcome confirmation that breeding had successfully occurred – the first time it's been documented here since 1976! The male was back in full song and perhaps they'll try for a second brood.

Two Lesser Black-backed Gulls and a Kestrel flew over, while Reed Buntings, Linnets and Whitethroats were busy feeding young.

A grey and drizzly morning produced the first wader of the wader of the autumn at Tuesley – a female Little Ringed Plover, sat incongruously amid a group of wagtails (no fewer than 35 Pied and nine Grey were counted). The plover, presumably a failed or non-breeder, marks a decent year so far for the species here with this being the fourth record.

Unfortunately this was overshadowed by a dead juvenile Black-headed Gull. I've been dreading the arrival of avian flu here and, so far, there's been no sign of it. Hopefully this death isn't related …

It felt like early autumn at Thursley this morning – a light mist, heavy dew underfoot and spider webs barricading footpaths. The seasonal flavour was enhanced at Pudmore when the familiar call of a Redshank was heard, followed by nice flight views of a bird still in full breeding regalia as it disappeared east into the murk. I can't think of many wader species more skittish than Redshank … still, a welcome site tick for me and my first of the year in south-west Surrey.

I was very pleased to see the female Teal through the gloom as well, with seven ducklings still in tow. This seems like a not so bad return with only three lost – hopefully most will fledge. A Snipe briefly displayed but there was no sight nor sound of the Curlews. Hopefully they're just lying low …

Other bits included a vocalising Spotted Flycatcher behind tumuli and lots of juvenile birds, including my first young Redstart of the year and heaps of Stonechats.

It's been a quiet first half of June, as spring has gently converted to summer. The dawn chorus is much reduced, juvenile birds are ever more evident and the days are long and warm. Surrey did in fact have a rather barnstorming few days at the start of the month in terms of rarities, but action in south-west Surrey was limited during this period and most of my sessions have been steady.

My first local session in nearly two weeks took place at Chiddingfold Forest after work, where two each of Nightingale and Garden Warbler were in song despite the rainy weather. Marsh Tit and Firecrest were also noted, while Swift and House Martin represented unexpected site firsts for me.

It was sunny and mild at Shackleford this morning, where 41 species was a good June total. The highlight was a Reed Warbler singing from deep blackthorn cover, marking my just about annual incongruous reedy record locally (and also only my second here). A Cuckoo flew east over, fittingly, Cuckoo Corner, the Stonechat pair had at least one juvenile in tow and some 200 Starlings were roving around.

The afternoon gardening was abruptly interrupted by a message and a flying trip up the A3 to Walton. Here, Chris T had pulled out a monster find: Surrey's second Lesser Yellowlegs, and a spanking summer-plumage bird to boot. The bird was settled and we enjoyed great views as it fed persistently along the shore, even performing the occasional short flight and vocalisation.

Absolutely mega – number 229 for me in the vice-county. An amazing footnote: this bird was photographed at Frankfield Loch, Clyde, two days later. The wonders of migration and vagrancy! 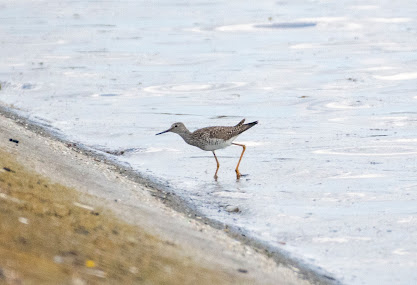 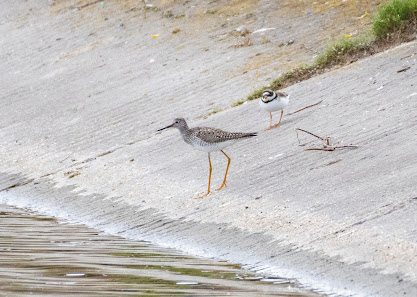 A Ringed Plover and a leucistic Starling (which briefly got the heart rate up!) were also noted, along with plenty of familiar faces.

My first visit to Thursley for two-and-a-half weeks was a pleasant affair under warm, sunny skies. The Curlew pair pleasingly had two chicks in tow on Ockley, looking about a week old – fingers crossed for full fledging. Lapwing and Snipe were also noted, along with Spotted Flycatcher in Spur Wood, a female Redstart taking food into a nest hole, a flyover Siskin and two wonderfully showy Hobbies over Shrike Hill. 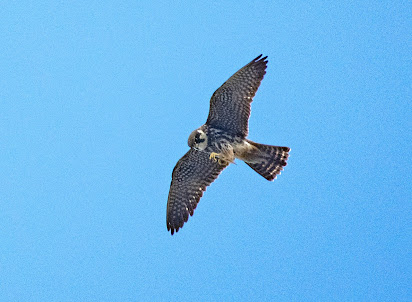 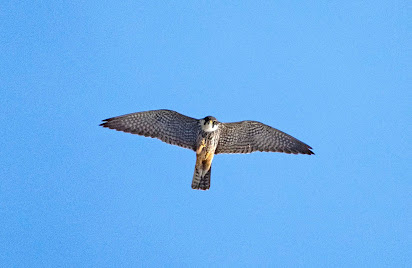 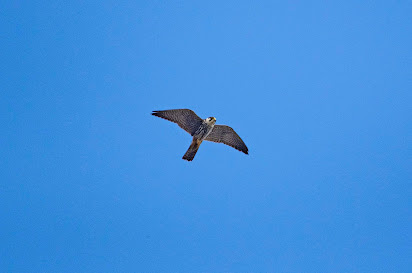 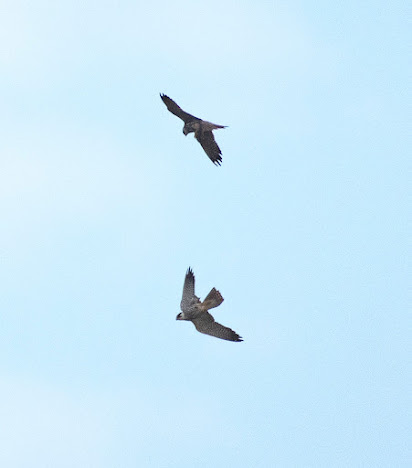 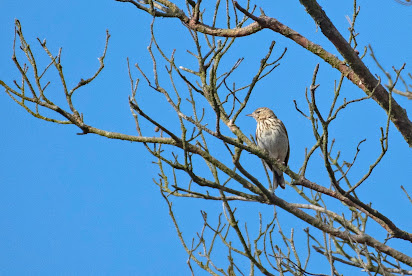 A catch-up with Matt, Abel and Sam in the evening included quiet visits to Waltham Brooks and Amberley Wildbrooks, with the two released immature White-tailed Eagles seen from the Rackham viewpoint at the latter site.

I walked Shackleford before work, with the most notable observation a flock of nearly 300 gulls – a really high count for the local area, especially in the summer. No fewer than 17 were Lesser Black-backed Gulls, marking my biggest-ever on the deck tally of this species in south-west Surrey. One of them – a second-summer – was bearing a red ring on its right tarsus but I couldn't get close enough to read it.

Hobby became a welcome addition to my 1 km year list during a pre-work walk around Eashing Fields, where at least seven Skylarks were counted – presumably displaced from recently cut arable fields in the local area.

Thursley was quiet this morning though there were positive signs coming from the breeding waders: the Lapwings were being particularly aggressive towards the local Carrion Crows (I suspect a nest is nearby), the Curlew pair were still marshalling their two chicks around and two male Snipe were singing. 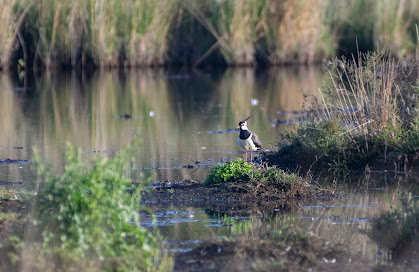 I walked along the river mid-afternoon. A Little Egret over Eashing Marsh was a surprise – I wonder where the nearest breeding site to Godalming is? A Spotted Flycatcher was in song and a group of six Red Kites enjoyed a thermal together under the increasingly grey skies.

A Palmate Newt was an unexpected garden visitor in the afternoon.

A long walk along the river this morning produced 55 species – a rather typical midsummer haul. A Hobby flew upriver at Unstead Water Meadows, where both Sedge and Reed Warblers were in song and the female Stonechat carefully gathered horse hair from the paddocks, presumably to line the nest ahead of a second brood.

At the Lammas Lands a Reed Warbler was a surprise on Catteshall Meadow – a first for me here. A Lesser Black-backed Gull (presumably one of the Farncombe breeders) flew over and both Stonechat and Reed Bunting were carrying food.

Two Garden Warblers were noted along the Eashing stretch, which was otherwise quiet 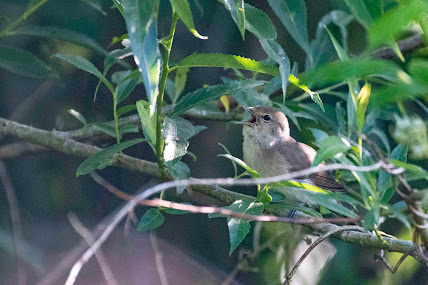 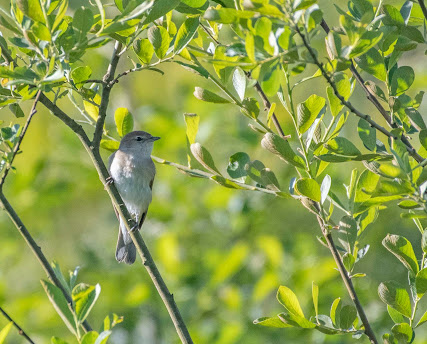 Cuckoo, Tawny Owl, Nightingale, Spotted Flycatcher and two Willow Warblers (including a mixed singer) were among the species in song at Chiddingfold Forest this morning. Young Firecrests and Marsh Tits were nice to see, but the highlight was a female and fawn Muntjac that pottered about on a track for a short while before disappearing into the understory.

My first Marbled White of the year was on the wing at Eashing Fields at lunchtime, where a family party of Linnets were in The Meadow.