It's been a quiet final week of November, with settled, mild weather never threatening to shake things up. Various forecasts are suggesting a cold snap in December, though – and at the very least some easterlies. So perhaps there will be a bit of end of year excitement to come in 2022.

Thursley was quiet this morning, with a species total of 35 more befitting a midwinter visit than a late autumn one. Two Lesser Redpolls flew over but passerine numbers were noticeably low. A Water Rail called at Pudmore.

I walked Enton Lakes this bright, sunny morning. Wildfowl numbers were woeful for late November – a mere four Tufted Duck and 10 Mallards! However, the visit was made worth it by a Cetti's Warbler skulking around Richardson Lake. Dave found this bird – which remains very rare and localised in south-west Surrey – a couple of weeks ago. Hopefully it winters.

On the way home, a Lesser Redpoll flew south-east over Eashing Fields. Amazingly this was the first in the Eashing area this year! It brings me to 106 for the 1 km year list. Four Common Gulls and a Sparrowhawk were also seen.

Upon arriving at the Lammas Lands this morning I was surprised to immediately hear a Hawfinch. I eventually located the bird, which was calling incessantly from atop a riverside willow near the Godalming United Church – bizarre! It then flew south. Unfortunately, having sparked a Godalming mini twitch, it wasn't seen again.

It's one thing having vis-mig Hawfinches in these out of context locations, as has been the case a few times this autumn, but to have one on the deck was strange indeed. I'm noticing a pattern with 'out of range' south-west Surrey Hawfinches and days of thrush movement – today a late south-westerly push of Redwings (120) and Fieldfares (40) was taking place ...

Other bits out of a decent total of 46 species (just on Catteshall Meadow) included the lingering Peregrine, a Little Egret, a male Sparrowhawk, two Stonechats and two Reed Buntings.

I walked Busbridge Lakes afterwards, for something a bit different, noting Kingfisher and Grey Wagtail.

A peaceful stroll around Frensham Little Pond this morning was fairly quiet, with 40 species noted. Six Little Egrets flew from roost, some 28 Cormorants were counted heading north and a single drake Pochard was on the water.

I was pleased to count a minimum of 85 Linnets at Eashing Fields at lunchtime – my biggest flock at this site.

It's been a wet last 10 days, with huge amounts of rainfall in short periods. After the incredibly dry summer, water levels are now well up and with it new, temporary habitat has appeared, especially along the River Wey. Normally such conditions don't occur until late December or January, so it's added a fun dynamic to birding recently, which has for the most part been slow with a creeping sense of midwinter doldrums.

Caspian Gull and White Wagtail were noted at Istanbul Airport while waiting out a grim delay to my connecting flight on the way back from Azerbaijan.

No fewer than three local year ticks appeared while I was away (typical!) and I was hunting some of them down at Thursley late afternoon, under broody skies that threatened rain at any point. A stakeout from the tumulus produced one: the male Hen Harrier that was found by Rosalind on Sunday. Although keeping distant, pleasant views were obtained as it quartered over Ockley, occasionally swooping down (and at one point seen eating something while perched).

Unfortunately there was no sign of the Great Grey Shrike – also found by Rosalind on Sunday and present on Monday as well – but some good company during the stakeout was compensation. A Brambling flew over our watchpoint too, but it was otherwise deathly quiet, save the star attraction.

A female Sparrowhawk, a Kingfisher and a drake Pochard were the best I could manage at Enton Lakes this morning.

It was a lovely, sunny start to the day as Dave and I walked Thursley, which on the whole was quiet – neither the harrier or shrike showed and perhaps both have moved on. A male Peregrine over Pylon Pool was the highlight, along with a broad southerly movement of nearly 2,000 Woodpigeons.

A Barn Owl was a nice surprise while driving along Thorncombe Street in the evening.

I undertook an enjoyable stroll along the Wey from Godalming to Shalford this morning, which was greyer and milder than initially forecast. A total of 55 species was OK, with the heavy recent rainfall meaning plenty more waterbirds than normal were dotted along various stretches.

I started at the Lammas Lands, where two Teal and the Red-crested Pochard x Mallard hybrid were on Overgone Meadow. A male Peregrine was seen over both meadows and failed unsuccessfully to take a Feral Pigeon over Catteshall Meadow. Other bits included 15 Snipe and a Chiffchaff. 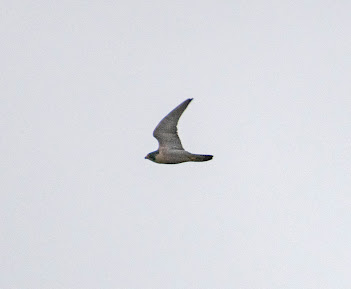 The north section of Unstead Water Meadows was almost entirely under water and plenty of birds were collected here, including 150 Black-headed Gulls and nearly 100 Canada Geese. Three Wigeon – a drake and two females – were a real surprise in 'Gadwall Gully'. Seemingly the first record here since 2010, Wigeon is rare locally and always good value, this being only my fourth south-west Surrey record of 2022. 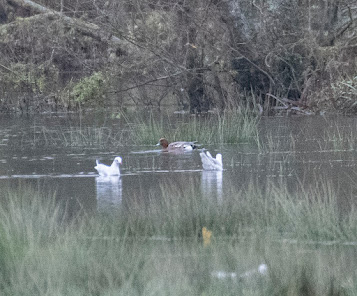 Seven Teal and three each of Little Egret and Snipe were present too. A Carrion Crow taking a fish from the Wey was an odd sight.

The Peasmarsh stretch was quiet, and Shalford Water Meadows was also flattering to deceive with only a Lesser Redpoll and a few Teal noted by the time I got to St Catherine's Pool. Here, however, a true local prize greeted me: a female Pintail, nervously in among a Mallard flock. 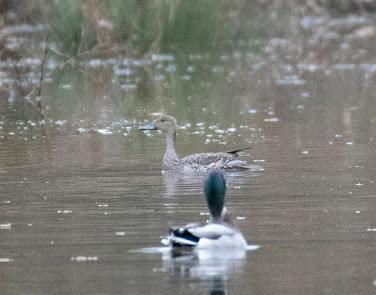 My first in south-west Surrey since January 2020, this was a nice reward at the end of a muddy and long walk. Pintail is a properly rare bird in the local area – six that Janet had over Unstead SF yesterday morning were the first in south-west Surrey for more than two years (clearly a few are moving at the moment). Upon chatting to ex-Shalford patch-watcher Matt later on, I learned this was the first documented record for the site since 1963. Mega!

A walk around Shackleford this morning was quiet, with Teal, Sparrowhawk and two Stonechats of note.

A Shoveler pair and six Pochard were the best I could muster at Frensham Great Pond this morning, which was wet and dreary.

Things were livelier at Cutt Mill afterwards with my first Goosander of the second winter period – a drake – on the house pond. There I also counted 44 Mandarin an 16 Shoveler.

I've spent the last five days in southern and eastern Azerbaijan, being lucky enough to join a press trip put on by the Azerbaijan Tourism Board. Despite the short length of the visit, the time of year and the fact there was a fair bit of work/non-birding activities going on, I managed a tidy 161 species (eBird trip report here). There's no doubt that this eastern extremity of the Western Palearctic is a top-tier birding destination.

The clear highlight was Caspian Tit, which was the main target of the trip. This near-mythical species was 'rediscovered' in the Talysh Mountains near the Iranian border in 2017 and an epic, muddy hike eventually resulted in decent views amid spectacular scenery. 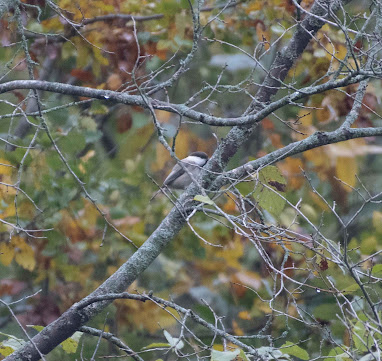 There were plenty of other bits to be enjoyed, with standout rarities including Sociable Lapwing, Steppe Gull and Isabelline Shrike. Azeri specialities included White-tailed Lapwings and Siberian Buff-bellied Pipit, while unexpected Mountain Chiffchaff and Red-fronted Serin were lifers for me.

Throw in a few more goodies (Alpine Accentors, Western Rock Nuthatches, Black Francolins, three-figure counts of Marbled and White-headed Duck etc), a day of spectacular migration at Besh Barmag (including nearly 800 Little Bustards) and some wonderful company and food, then a recipe for a thoroughly enjoyable few days was complete.

A few photos are below. I'll write a full feature in an upcoming edition of Birdwatch.

Lengthy periods of quiet, interspersed with short, exciting windows of action, has been a marked theme of birding in 2022. And this past week has been a microcosm of that – for the most part, dull, damp and mild, but a day of blasting north-westerlies on Friday opened a brief period of migration and movement. Hopefully some more typical late autumn and winter weather makes an appearance soon.
Tuesday 1st
Five Gadwall were the best I could manage at a quiet Snowdenham Mill Pond this morning. On the way home, a Red-legged Partridge was seen along New Pond Road, Loseley.
Wednesday 2nd
A bright, fresh morning meant a wander around Shackleford was enjoyable, with a constant – albeit light – southerly passage of Woodpigeons underway. The two Black Redstarts were at the south end – surely confirming them as the same ones first found on 22nd (and meaning the bird Joe and I had last Friday was probably not new). I got good enough views to confirm one as a first-winter male. 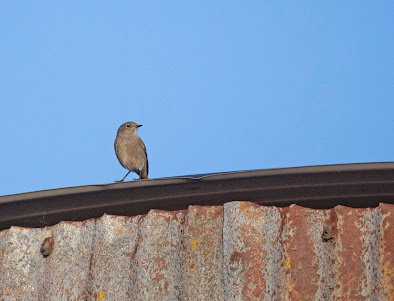 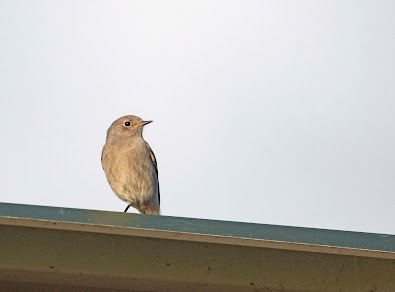 Other bits included a single Yellowhammer, eight Reed Buntings, Lesser Redpoll, 50 or more Skylarks and some 100 Meadow Pipits.
Thursday 3rd
No birding.
Friday 4th
Finally, a switch in wind direction, and with it a tidy couple of hours at Thursley where 51 species represented a fine November innings. Woodpigeons were on the move and, in an hour of vis-migging from Shrike Hill, I managed some 3,760 birds going south. Other bits heading in that direction included the third site Yellowhammer of the year and 10 Lesser Redpolls. 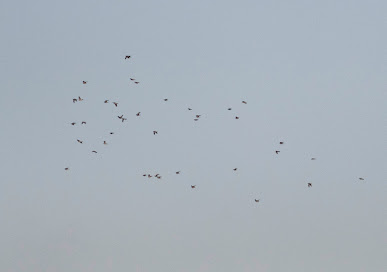 Redwings were moving west on the continental line with 500 tallied, along with two Bramblings, four Skylarks and 70 Starlings. The highlight of the watch came at 07:40, when a Merlin dashed low north to the west of my viewpoint. The bird, I suspect a young male, offered good views before it disappeared over West Bog. Cold north-westerlies often feel good for Merlin and I was very pleased with this – the first in south-west Surrey this year and my first locally since October 2020.
It was quieter on the deck, with two Water Rails and a Kingfisher at Pudmore.
Saturday 5th
A drizzly but thoroughly enjoyable wander across the Lammas Lands this morning, yielding no fewer than 52 species. In rarity terms the clear highlight was a Hawfinch bounding north-east over Overgone Meadow – presumably a site first and yet another unexpected record of this species in the Godalming area this autumn. Overgone also produced a first-winter Dartford Warbler (likely a bird that was found by Peter last weekend) and, bizarrely, one of the local Red-crested Pochard x Mallard hybrids.
Water levels and thus Snipe numbers were up on both meadows, with six flushed on Overgone, along with a surprise Woodcock – a first for me on the Lammas Lands. A minimum of 24 Snipe were then tallied on Catteshall Meadow and I was a touch disappointed not to score a Jack. Still, promising ahead of the winter.
Other bits included some decent vis-mig between the showers, featuring 600 or more Redwings, 100 Starlings and a Skylark west and 700 Woodpigeons south. Three Lesser Redpolls, Kingfisher, six Reed Buntings and two Stonechats were also seen.
Unstead Water Meadows were much quieter, as they often seem to be, though two Little Egrets, 13 Snipe and a Ring-necked Parakeet were of note.
Sunday 6th
No birding.
Monday 7th
Another mild and drizzly morning after a couple of days of heavy rainfall. At Enton Lakes, a Shoveler pair were in the south-west corner – a site first for me. Kingfisher and Chiffchaff were also noted, but Aythya numbers were very low for November.
I then checked Frensham Great Pond, where a single female Pochard was asleep off the hotel. The wintering drake Tufted Duck x Pochard was also present, along with a Marsh Tit calling near the outlet pond.
Tuesday 8th
No birding.
Posted by Ed at 07:18 No comments: