August never fails to the deliver, and the first 10 days have been typically fun and busy in south-west Surrey. I’ve not yet scored a local year tick – more on that later – but the feeling that the seasons are shifting, birds are moving and that a big one is just around the corner is near-constant now. In these busy times I’ll whizz through events in chronological order, with a few photos thrown in too.

A Common Sandpiper at Tuesley at dawn was the first migrant of the month, followed by two lemon-yellow Willow Warblers at Shackleford shortly after. At the latter site, a female Pheasant with chicks was a rare case of natural breeding of the species locally. Unstead SF was quiet, but Snowdenham Mill Pond delivered a mega Thorncombe Street record shortly after – only my second patch Common Sandpiper and the seventh ever!

In a normal year, when I’d be patching Thorncombe Street hard and focusing on my patch year list only, this would be the stuff of dreams. After we spooked it from the shingle drive, it flew to one of the fallen trees and began feeding away happily … so mega. Two Teal were also here. 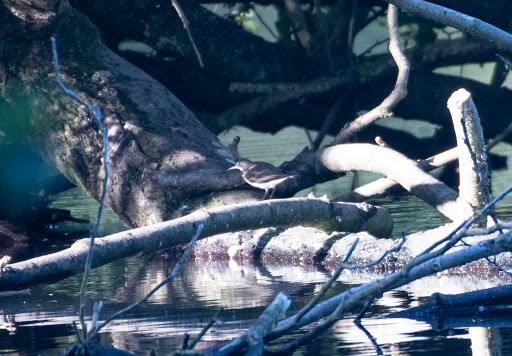 Later that morning, I joined Kit on a Tice’s twitch. Kit’s been getting quite into his Surrey list and needed Little Stint, with one having been found by Rich S. We soon got on the bird in question and it was showing similarly to one I saw here in September 2014 – very distant! The views were crap and I got some record shots. If I’m honest, I’m not totally convinced this isn’t a Dunlin, but my wader game isn’t my strongest. In the below photo (the bird in front of the Green Sandpiper) it looks small, but facially rather like Dunlin.

A good session with the friendly locals also yielded the two Great Egrets, another (the same?), heard-only Dunlin, 10 Green Sandpipers, Common Sandpiper, Little Ringed Plover and a Willow Warbler. The site looks great at the moment and I anticipate a decent wader or two before October. 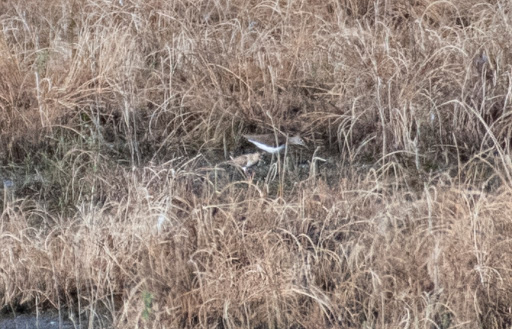 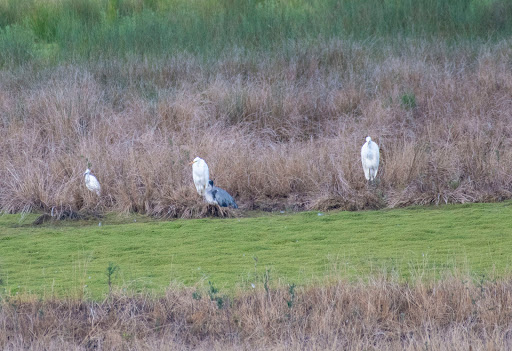 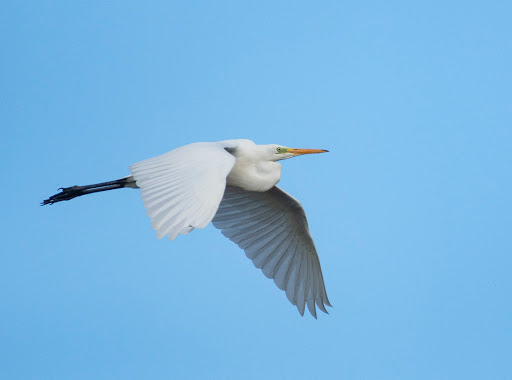 Another fun morning, this time with Sam, with a similar line-up of migrants – a Tuesley Common Sand, before three Willow Warbler and a fly-over Tree Pipit at Shackleford. A Peregrine overflew the latter site. Hankley Common was quiet but Thursley was much better: a Green Sandpiper, three each of Teal and Water Rail, Sand Martin and Little Grebe were at Pudmore, only bettered by two Reed Warblers in the reeds on the north end – a rare bird here. A Hobby was in Pine Island 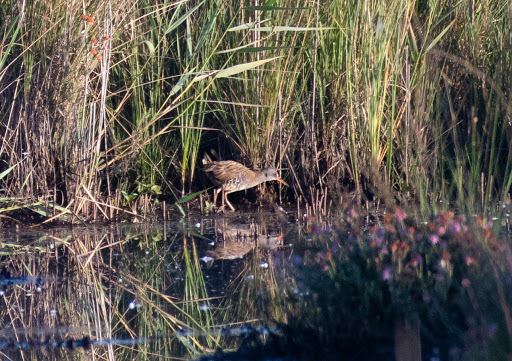 I visited family on the coast that afternoon and casual observations included a small flock of summer-plumaged Turnstones on Felpham Beach, a male Marsh Harrier at The Burgh and two Mediterranean Gulls over Arundel.

Yet another decent morning, and another Thorncombe Street surprise, this time my third patch Reed Warbler in, you guessed it, the reeds at New Barn Pond. Other bits in a walk around the south section included a Spotted Flycatcher, Firecrest and Siskin, as well as a brood of Moorhens. Elsewhere, the Grasshopper Warbler pair were checked on and, pleasingly, a successful second brood was evidenced. 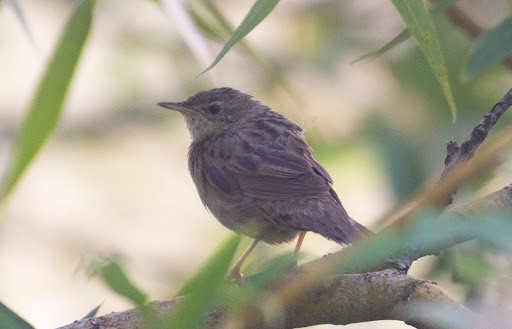 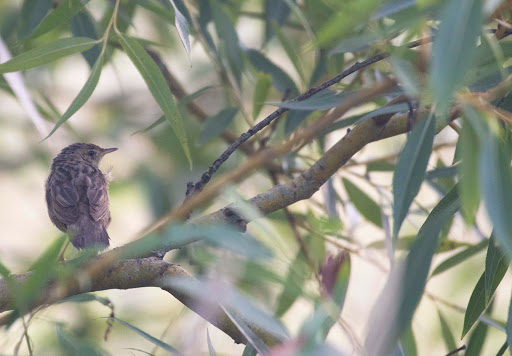 Tuesley held another Common Sand and the best from a walk around the Dunsfold countryside was two Yellowhammers, a Garden Warbler, a Red-legged Partridge and some 500 Jackdaws.

Frensham Great Pond was the venue of choice first thing but, while two Crossbills at the north end were welcome, there wasn’t heaps else to report – a flyover Kingfisher near the hotel, 120 Sand Martins, 30 Swifts and a handful of juvenile Reed Warblers. Shackleford too was quiet later on.

A slightly better innings at Shackleford, with a Willow Warbler and three Stonechats. At Unstead SF, two Reed Warblers and 17 Herring Gulls were tallied. The bird of the morning came at Snowdenham Mill Pond – the first Shoveler of the autumn, a juvenile, and my first locally since 2nd April.

After a couple of quiet days, things sprang back into life on Friday. The manic cries of an Oystercatcher, heard from within the all too regular dawn Pudmore fog, was a startling start to proceedings. Sadly I couldn’t see it and can only presume it either flew through or was flushed just prior to my arrival. A Green Sandpiper on the deck was more obliging, though flighty, a couple of juvenile Tree Pipits were in adjacent birches and a Grey Wagtail was at The Moat (not common at Thursley).

At Tuesley, a late brood of three Little Grebes, a flock of 25 Magpies and another/the Common Sandpiper were noted, before I recorded the Shoveler as still present at Snowdenham Mill Pond. Unstead SF felt super rare afterwards – in one small area, some 35 Chiffchaffs, a Spotted Flycatcher (my first here since September 2003), two Willow Warblers, a Garden Warbler, two Reed Warblers, 16 Blackcaps and three Whitethroats were all feeding on the insect swarms and elder berries.

Later on at Shackleford, the latest cutting of the alfalfa meant it was quiet (and hot), but four Ravens and 13 Red Kites were good counts. An adult Lesser Black-backed Gull flew south.

Less entertaining, but still moderately fun. A vocal juvenile Willow Warbler and the obligatory Common Sand were at Tuesley, prior to a rather quiet watch at Shackleford, save 120 Starlings and three juvenile Lesser Black-backs over. Two Shoveler were now on Snowdenham Mill Pond, but Unstead SF was quieter, despite three Willow Warblers now present and a good amount of large gulls.

In the afternoon, another coastal family visit was very hot, though a Common Gull caught a very large fish from a few feet away from where I was swimming and a light westward passage of Swifts was taking place along the beach.

Another Thursley visit produced a brief Little Egret, which touched down for a bit on Pudmore, a Snipe and a flyover Siskin. A Spotted Flycatcher was a nice surprise at Tuesley afterwards, two Common Sandpipers less so. Unstead SF was again rather quiet, but having returned home and watching reports of Pied Flycatchers flood in, I couldn’t resist another visit. This paid off – five species of raptor were easily headlined by an adult Honey Buzzard, which caught me quite by surprise as it cruised very high south just after midday. 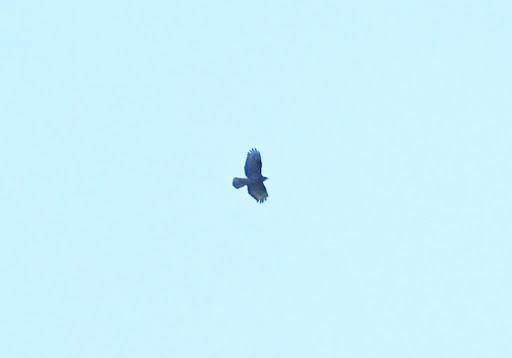 Certainly not what I was expecting (I wouldn’t have minded it being a Marsh Harrier to be honest!) and a welcome site first for me. Dave BU has had two migrants over Black Down during the past week – it seems non-breeding adults are heading off early this year. Worth getting a little sunburned for.

Shortly after, five Lapwings flew west, before reappearing and flying north. There was something quite sad and poignant about it really – only 15 years ago, early August saw numbers of this species peak on the North Meadow of this site, with triple-figure counts annual. I’m sure they weren’t, but they seemed rather lost. Even the water meadows are too dry and lifeless these days – a species very much on the way out locally. 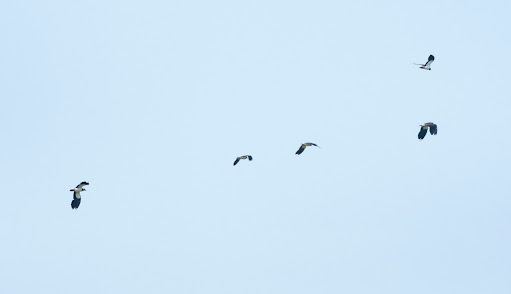 A dusk walk around Thursley was quiet, though a female Nightar calling on High Ground was of note, as was an adult male Redstart (usually only see females and juveniles from late July).

No need to write this really – two Common Sands were of course at Tuesley. A visit to The Hurtwood afterwards was steady, with 9 Crossbills over, a Spotted Flycatcher, two Woodlarks and two Siskins noted before the heat kicked in.

And that’s the start of August, a third of which we’re already through. In terms of my south-west Surrey big year, I still sit on 145 – five species from the holy grail target. However, as the days and weeks roll on, I’m becoming a little more worried about where these five will come from. I’m not missing anything blindingly obvious and, apart from Ring Ouzel, which is just about to be expected, everything else would very much be a bonus. 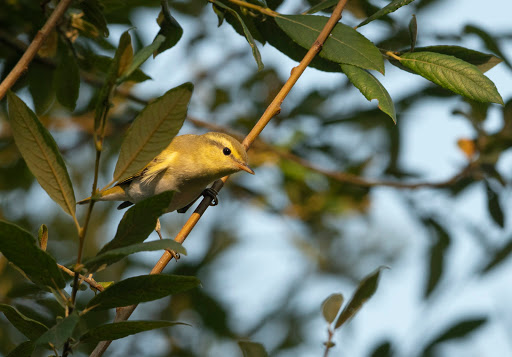 For August, I have drawn up a list of six targets, and seeing just one of them would be ample. Ideally, though, I get two – I’m not entirely keen on heading into September still needing four year ticks. These August targets and associated locations (which will explain the frequency of some of my site visits recently) are: Marsh Harrier, Pied Flycatcher, Wood Warbler, Wood Sandpiper, bonus rare wader and Black Tern. If you know of or find any of these species in south-west Surrey, please let me know!

As I say, if I can go into September on 147 – with Ring Ouzel remaining – I’ll feel confident. 146 or, dread to think, 145, would leave me with a very uphill task. That said, I fancy August to deliver the goods – it has a habit of doing so.