2021 is done. Despite a rather disappointing 12 months of local birding a couple of surprise finds in the second half of December – both of Russian origin – have provided an uplifting finale to the year, as has a change of avian scenery following a few days in Sussex and a last-gasp Surrey twitch. 2022 begins tomorrow, and so a new birding calendar commences. Bring it on.

Another unseasonably mild morning tempted me back to Cranleigh SF, which paid off. A similar number of Chiffchaffs were on the east side and among them was a ghostly pale individual: enough to get the tristis alarm bells going. The bird was highly mobile and never called but responded to brief playback. It was incredibly hard to keep on, let alone photograph (especially in the dull light), but lots of good features were eventually seen: a bold and extensive supercilium with tobacco-coloured ear covers, beige (Garden Warbler-esque) plumage tones, a bright alula, dark legs, silky white underparts etc. 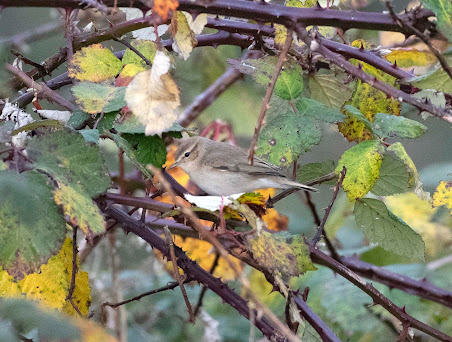 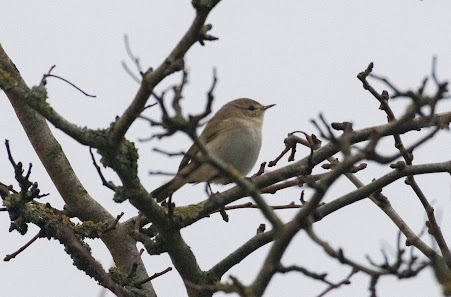 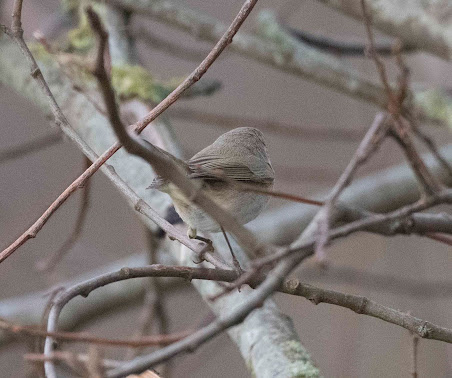 This is the third December in a row I've found a local Siberian Chiffchaff so I was pleased, especially after a year in which I've been below par in my finding. A brief Firecrest was noted nearby, along with a young male Sparrowhawk. This site is worth checking for sure – Surrey's first Dusky Warbler will fall one day!

A male Kestrel was seen over Farncombe from the kitchen window mid-morning.

Measly wildfowl numbers at Frensham Great Pond first thing included five Pochard and 29 Tufted Duck. A Chiffchaff was heard on the south side, a Water Rail squealed from the south-eastern reedbed and two Firecrests were noted.

I met with Dave at Enton Lakes first thing, where a few decent bits were present among the 38 species recorded. Two each of Little Egret, Kingfisher and Water Rail highlighted, with drake Pochard and Mandarin also of note. Some 50 Siskins flitted through the alders and, despite the chilly easterly, my first drumming Great Spotted Woodpeckers of the season were very pleasing to hear.

I then checked Frensham Great Pond, where four drake Shoveler were new in, along with an increase in Aythya that included 17 Pochard. Two Kingfishers were seen but I once again left this site decent waterbird-less, and just as news of a Smew – my most wanted Surrey bird – broke at the London Wetland Centre.

I had no time to get there before work beckoned but was able to quickly check the fields at Loseley on the way home. Here, some 198 geese included 137 Canadas but nothing rarer, and still no Lapwings.

A lovely, chilly winter morning with blue skies and a sharp frost. With the wind still in the east I did a big local waterbody sweep, but again came up short on both quality and quantity. Some 25 Shoveler at Frensham Great Pond and a Red-crested Pochard x Mallard hybrid at Snowdenham Mill Pond highlighted. I again checked Loseley before heading home, with Greylag numbers sharply up from 52 to 92. Large numbers of Larids included some 115 Common Gulls and a female Kestrel was on roadside wires.

Four Wigeon greeted me at Frensham Great Pond first thing – only my fifth local record of the year. They were vocal but settled at the south end, where five Shoveler were also present, as well as 11 of the 21 Pochard on site. A Lesser Redpoll flew over too. Afterwards, Frensham Little Pond held three Shoveler and six Pochard. Finally, a drake Gadwall and two Teal were the best from a quick scan of Snowdenham Mill Pond.

In the afternoon, on the way down to my parents' house in Felpham, two quick stops were made. The first, on the east side of Pulborough town, produced two Cattle Egrets feeding in a sheep paddock. At the second, at St Mary's Church in Burpham village, distant views of two adult Bewick's Swan were had – a real favourite of mine but one that is sadly vanishing from the British winter landscape. A female Brambling was in a small Chaffinch flock just up the lane as well.

During a couple of quick scans of the sea from my parents' living room there was more than usual about, probably due to the easterly wind. At least nine Red-throated Divers included a few relatively close in, while two each of Red-breasted Merganser and Common Scoter flew past. A handful of Gannets and Mediterranean Gulls were also about. 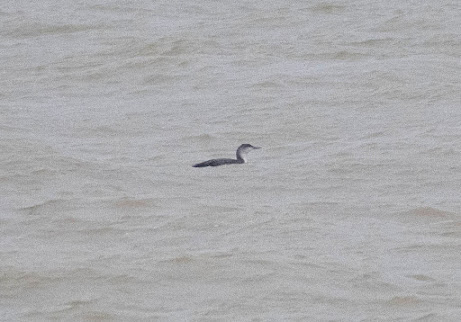 An early afternoon wander around Burpham village produced an impressive 10 or more Chiffchaffs at the little sewage treatment works, though I couldn't pick out anything with a hint of tristis about it. A male Sparrowhawk lurked nearby, 18 Lapwings flew north and the two Bewick's Swans were in the same field as Friday.

On the way back, a Black Swan in a field with some 30 Mutes was a surprise while driving along Ford Road south of Arundel. A quick look at Bilsham farm reservoir produced eight Mediterranean Gulls, four Shoveler, two Teal and 18 Gadwall.

It was much quieter off Felpham during a brief afternoon seawatch, with five Wigeon, one Red-throated Diver and a single Curlew all heading west the highlights.

An afternoon of birding the Arun Valley with Sam and Matt proved enjoyable, despite the strong westerly wind and frequent rainfall. We started at Waltham Brooks, where the sewage works produced a showy Siberian Chiffchaff (present since 21st) in among five or so collybita. A female Marsh Harrier flew over the brooks too – one of four different birds seen today.

We then headed to the water meadows around Arundel and Burpham, where the Bewick's Swans seemed to have done a bunk, despite checking from both sides of the valley. We did however see six Cattle Egrets east of Mill Road, another female-type Marsh Harrier and a drake Shelduck on temporary floods near Arundel station.

Amberley Wildbrooks was up next – a site I particularly like. We scored 48 species here which wasn't too bad given the conditions. The clear highlight was a ringtail Hen Harrier that was causing mayhem among the masses of waterbirds (at least 350 Lapwing!). At one point it was mobbed by two Kestrels. Given there is only one ringtail wintering in the Arun Valley this year, it seems possible to be the bird I had over Tuesley back in md-November – see here. Other bits included male and female Marsh Harriers, thousands of dabbling ducks (including 100 or more Pintail), five Bullfinches and good numbers of winter thrushes.

We ended the day back at Waltham Brooks, where we staked out from Greatham Bridge. This produced a surprise Water Pipit in flight – a decent Sussex bird and local rarity. Two Peregrines and a Sparrowhawk shooting through made it seven raptor species for the day before, fittingly, a lovely winter's afternoon in the field concluded with the ringtail Hen Harrier coming into roost in the falling light.

A mild, wet and murky morning offered little inspiration and I nearly didn't head out, but I decided to quickly check the Loseley fields before work, having not been for a week. Despite higher water levels (and thus habitat) along the river following recent rain, goose numbers were still impressive – 169 Canada, 91 Greylags and 15 Egyptian were all decent counts.

However, to my delight, another goose species was espied on this visit: a lovely adult White-fronted Goose, in with a Greylag group. It was always distant but the smaller size, white blaze, belly barring and pink bill were seen well. This was a nice one to find having kept tabs on the goose flock here during the last couple of weeks; it also served as a welcome and uplifting end to a rather disappointing year of local birding. 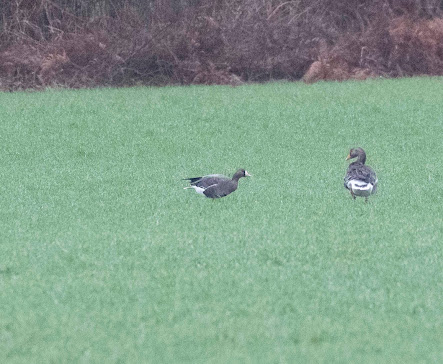 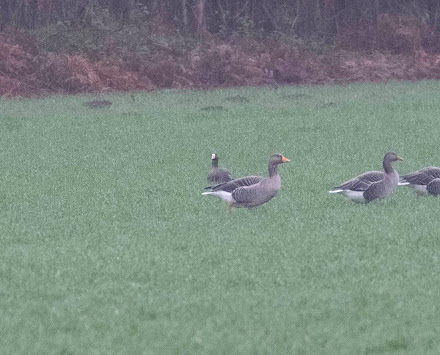 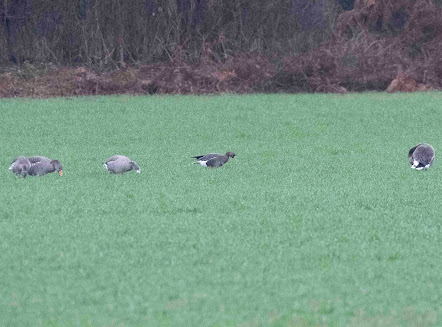 Dave and Joan were able to connect but the bird had apparently vanished by early afternoon. A mini influx of White-fronted Geese has occurred in the South-East again this December (including two vice-county records), though on a much smaller scale than 2020. However, it's still a great rarity locally – this is only the 18th south-west Surrey record. Lovely stuff, and within 1.5 km of my front door to boot.

Perhaps unsurprisingly the White-fronted Goose was seen along the Wey water meadows near Unstead yesterday afternoon by Malcolm F, so it seemed likely it'd roost nearby. Sam and I met at Broadwater at first light but, despite an impressive 85 Greylags counted, there was no sign of the Russian visitor. Sam then worked the river and didn't locate it; nor did I at Snowdenham Mill Pond or Loseley. Perhaps a one-day wonder?

Two each of Gadwall and Teal were on the mill pond and a male Sparrowhawk showed well at Loseley, where goose numbers were well down. Nearby two Little Egrets were in their favoured field at Mellersh Farm.

I was contemplating cracking open the first New Year's Eve beer when Duncan B reported a redhead Smew at Thorpe Park this afternoon. My Surrey kryptonite, and having missed two already this year, I just had enough time to head up before it got too dark and get home in time for the festivities.

The bird was initially distant on the small fishing pit but eventually showed a bit better, and I was treated to satisfactory views as it foraged in the south-east corner, loosely associating with some Tufted Duck and keeping close to the vegetated shore. Closer views also allowed it to be sexed as a drake, with various male features detected and white feathers moulting through on the upperparts and flanks. 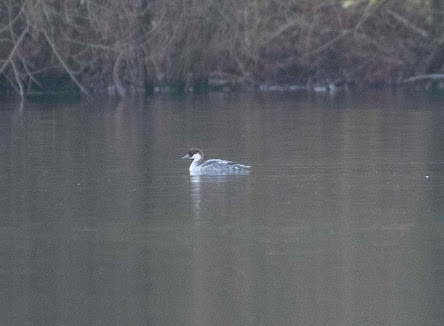 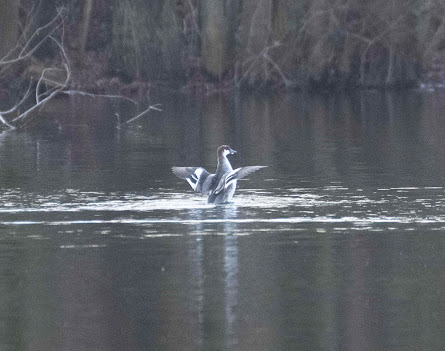 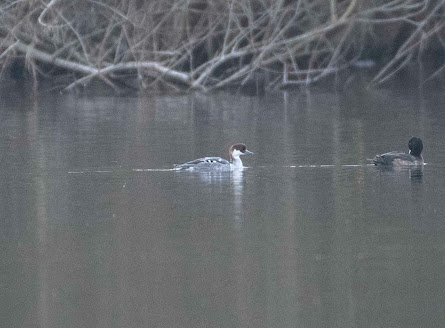 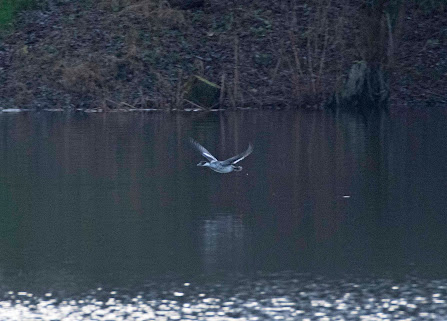 Two Kingfishers, a Chiffchaff and a Kestrel were also noted. A fine way to end the year – perhaps my favourite species of all finally on my vice-county list (number 228) ...