The last week or so conjured up a mixed bag of weather – largely cold – though the really hard conditions forecast for some time never quite materialised. As a result, patch has been a steady affair, though some nice records have occurred with three new species for the 2019 Thorncombe Street list, as well as some notable counts. Moment of the weekend, however, came away from patch on Sunday evening …


I was able to get a morning session in on Thursday. In glorious sunshine there wasn’t masses of action, though concluding the visit with a Little Egret at Bramley Park Lake was pleasing. Far more satisfactory, however, was confirming the continued presence of one of the Little Owl pairs, with a bird catching the rays at Bonhurst Farm. That is came not long after I suggested they’d be hard to locate this year is apparently a nice piece of reverse psychology. So, I’m never going to see Rough-legged Buzzard here …

Two species having a good winter are Gadwall and Meadow Pipit. Some notable flocks of the latter have been notched up during the last few days including two separate groups of more than 30. Gadwall are ever-increasing and 22 on Saturday was a joint highest site count. Despite the drop in temperature no other ducks have increased and Sunday WeBS survey was quiet, though a few Shoveler have appeared on Mill Pond for the first time this year.


Saturday was damp and gloomy so little birding took place. I did however enjoy quality time with some Marsh Tits. I mentioned increased numbers in a recent post and, from a new hide (sadly private) on one of the estates, I was thoroughly entertained by two individuals for an hour or so. It’s well known that this species has the greatest memory of all tits and these guys were constantly flying to and from the feeders, stashing away nyger seed and peanuts. 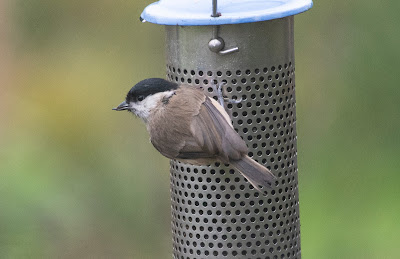 In terms of weather Sunday was a complete opposite, with sunshine and clear skies. This prompted two year firsts: a skywatch and displaying raptors. I spent two hours on The Ridge gazing at the sky, hoping for a nice harrier or Merlin to dash through. Alas, none materialised, and the displaying birds of prey were just the commoner locals, but it was still nice to be out and feeling hopeful, even if two Crossbills was the best I could manage. Away from here, I did bag another Little Egret, at Eastwaters Pond.


It was also quite a treat to be on the patch with birders – at least four others were out and about in the Thorncombe Street area during the day and while Abel is a bit of a fixture now, ‘guests’ are still very rare! He managed at least seven Crossbills at Nore Hanger (it’s a good winter for them) and Gillian was delighted to catch up with one of the Little Owls and the wintering Firecrest at Bramley Park Lake.

Despite a relatively quiet day the fine weather felt perfect for a smart owl or raptor, and I was tempted out one final time towards sundown. Last week I stated my intentions to give Unstead Sewage Farm a bit of a check when I can and, having exhausted efforts on patch, I figured I’d have a late afternoon stomp around there, in case I could locate a Barn Owl or Woodcock. Wandering a little off-piste I flushed a Snipe, with a Water Rail calling nearby and the Green Sandpiper was still bobbing about. Birds were ditching into various roosts and with the temperature and amount of light dropping, I decided to call it a day.

Literally as soon as I turned to head back, I found myself looking at the silhouette of a Marsh Harrier – not what I was expecting at all! The bird calmly continued fairly low north over the meadows, seemingly looking for somewhere to spend the night. To be honest, I expected it to drop in, but I lost it as it made its way towards Broadford. Surely, it must’ve roosted at Shalford Water Meadows … The dim light and unexpected appearance account for the poor images (Photoshop tried its best). 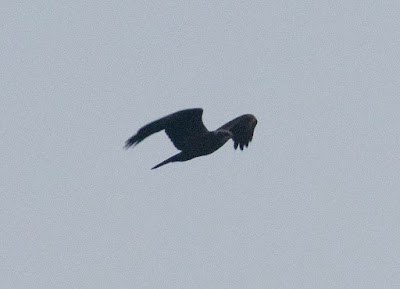 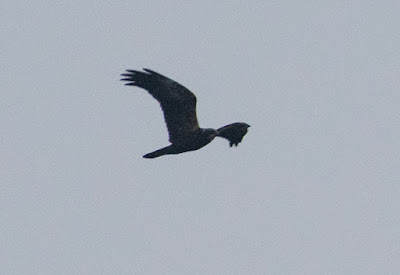 A definite weekend highlight, though I admit a tinge of annoyance I hadn’t seen it over the patch. I strongly suspect it cruised up the Arun and then Wey on the raptor-friendly conditions, though a mid-January record is unusual for a bird that peaks in Surrey in March/April and August/September. Matt later told me that numbers in the Arundel Marsh Harrier roost have dropped off recently – perhaps this individual got a bit restless and decided to have a nose north? Either way, a splendid encounter and my first in Surrey (where it remains a rare bird – perhaps 4-5 a year) since a patch individual in 2016.


Things were rounded off yesterday with another Ridge vigil, this time fuelled by the optimistic thought that some hard weather movement may take place. It didn’t, in short, though several flocks of Starlings moved keenly southwest, suggestive of birds on the run. I’d have taken two Goosander flying over, which Wes scored atop Leith Hill tower, but in the end it was a watch that goes down as valuable hours of not much seen in the bank – in the inland patch game they all count as currency to eventually exchange for a rare!
Posted by Ed at 06:23