Having picked up a knee injury at football I haven’t been too mobile these past couple of weeks, though things have been far better during the last seven days in terms of getting about. During what’s classically the quietest time of the year, most of the highlights have involved young birds, both on patch and further afield.


On 4th, a fairly standard early morning visit to Winkworth was lit up by a wonderful encounter with a female and two fledgling Tawny Owls. Of course, this isn’t a species one sees often, let alone in the day, so it was a welcome surprise when the unmissable begging call of one of the youngsters could be heard from the trees around Azalea Steps. The mum stayed largely hidden, though one of the juveniles performed slightly better, occasionally coming out into the open. They soon slunk off into the deeper part of the woods.

Sticking with owls, a late night drive through the site on 5th delivered all three species that can be found on the Thorncombe Street list, with two other family parties of Tawnys along with singles of Barn and Little. On 3rd, the annual Mandarin post-breeding flock on Mill Pond seemingly peaked, with 83 logged, higher than the biggest count last year but still a fair bit off the record of 96 on 18 June 2017.


Three broods of Tufted Duck have made it this year at the same site, a great effort, especially given there’s never been more than one pair breed in recent years. On 6th, a hunting pair of Kingfishers was a bit of a surprise – the species had gone missing for more than three months but, presumably, these two have hungry young to feed. A similar situation took place last year though it’s hard to envisage a nest site in the actual recording area and it’s more likely they’re somewhere on the river at Wonersh.


Other patch bits include the continued presence of Yellowhammer at Tilsey Farm and a fourth Spotted Flycatcher territory of the summer, logged in the south section on 4th. On 2nd, Steve and I tried out a new ringing site near Bonhurst Farm. It was a fairly decent start, with six (mainly juvenile) Chiffchaffs processed. Noc-mig, on the other hand, has been very poor of late with hardly anything of note picked up since early May, despite frequent nights of recording recently.

On the evening of 4th, encouraged by the first few juvenile Yellow-legged Gulls of the year being recorded on the south coast, I headed to the Hillfield Road car park at Selsey. A short wait and a few slices chucked was all that was required – a really smart, crisp bird flew in. It ended up being particularly confiding and impressively heftier than the non-breeding Herring Gulls that were about. I enjoyed a good hour or so with the bird in excellent weather and, despite failing to nail a decent flight shot, was pleased with this 100% start to the gulling season. 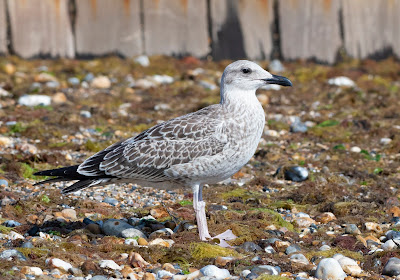 It looks like this was the joint fourth juvenile Yellow-legged Gull to be logged in Britain and Ireland this summer, and was certainly the earliest I've ever had. The first was at Eastbourne on 1st, before individuals at Dungeness and Goring-by-Sea on 3rd (it's entirely possibly the one I had was the same as at the latter site). On the same day as the Selsey bird, another was at Weymouth. 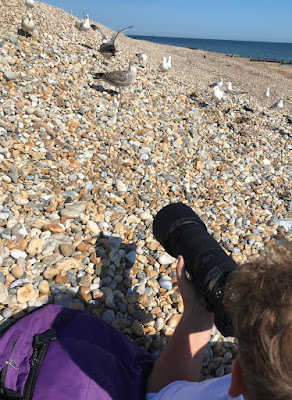 On 7th, with a view to give my knee a lengthy but gradient free run out, Thorney Island was identified as the ideal place for an early morning walk. Despite constant drizzle and murk it was a pleasant enough seven-mile loop, with a flyover Cattle Egret highlighting (though almost expected given the recent news of Hampshire’s first breeding birds scarcely a mile away to the west). Other bits included a couple each of Whimbrel and Cetti’s Warbler.

It definitely feels rare along most of the south and west of the ‘island’, though there’s the possibility it’s too tucked into Chichester Harbour. It doesn’t have a fantastic roll call of rarities down the years but is very under watched, and worthy of further investigation, especially given there has been enough decent bits (Red-breasted Goose, Aquatic Warbler etc) despite said limited coverage.
Posted by Ed at 00:38