Despite the uncertain times we’re currently in, birding has continued chugging along, offering a welcome escape from constant COVID-19 updates. This time of year is generally one of my favourites and, despite the rather bleak outlook for the rest of spring and summer, there has been plenty of cheery moments in the field this past week or so.


After finishing the last magazine on Wednesday I left the office for what could well be the last time in months. After a busy week, I had a late start on Thursday and wandered the east section of Thorncombe Street, logging my first definitive migrant patch Chiffchaffs of 2020 and a female Sparrowhawk unsuccessfully take out a Feral Rock Dove at Bonhurst Farm.

A sunny and windy visit of Unstead SF afterwards was more productive and veritably spring-like: eight Chiffchaffs in voice, a Firecrest along the footpath and – best of all – a loud burst of confirmation that the Cetti’s Warbler is still present, in voice if nothing else. In poor conditions I managed some low-quality recordings of this south-west Surrey rarity.


The next morning I started at a traditional Lesser Spotted Woodpecker site, following up on a couple of recent reports of fleeting birds. On the way, two Red-legged Partridges flew over the road at Hurtmore. I didn’t see any little peckers, alas, though some of the habitat looks fantastic. Success – albeit heard-only – at a known site (where breeding was confirmed last year) was achieved afterwards.

Later on, it was nice to get in on some Stonechat movement with an impressive six at Shackleford farmland (a pair has been present all winter). I then teamed up with Abel to give Unstead a good stomp around. The Cetti’s Warbler performed again and I had my second Blackcap of the spring singing near the North Meadow (Abel’s first) – another welcome nod to the seasonal shift. 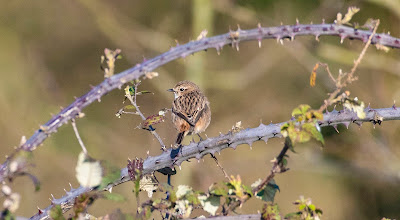 In my last post I expressed concern about the non-return of the Thursley Curlews, so I was very pleased to hear from Peter O that he’d had one on Friday. Delighted with the news, I was on the boardwalk at dawn, though as the rain poured down and the wind whipped around my face I questioned my decision. Indeed, bar a Tufted Duck and squealing Water Rail there was no sign of any Curlew on Pudmore, despite several loops and scans.

Then, minutes after the rain stopped, that familiar call filled the air and within seconds I had my eyes on the bird …

In the gloomy conditions I struggled to get any decent shots, but it was wonderful to see the individual – a male – performing his display flight and wheeling past quite close at times. As this was going on, a microcosm of Thursley birding happened when, turning around to put my camera back in my bag, I noticed the familiar shape of a ringtail Hen Harrier drift towards me. 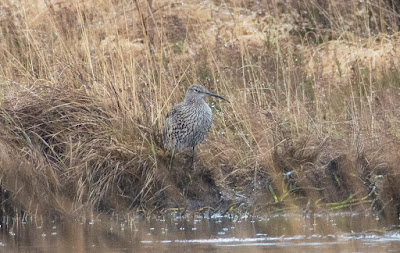 It ghosted past, low south, and disappeared behind Pine Island, all while the Curlew was still flying around calling. Superb stuff. I was actually the last person to see a/the ringtail here, back on 20 January following a spate of sightings. It seems likely the individual on Saturday was the same (and also the bird from Shackleford farmland last autumn) and has just been overlooked, probably because it’s mainly using Thursley to roost.

Thursley in a nutshell – it can seem bleak and dead for long periods, but in a split-second anything can happen. The harrier has been seen twice since, and will hopefully hang about for a couple more weeks …


With a Little Gull at Tice’s Meadow (just north of the south-west Surrey boundary) that morning, and at nearby Edenbrook CP in Hampshire, I rolled the dice and did the Frensham Great Pond roost. There was no sign – just 211 Black-headed Gulls – before I hopped over to the Little Pond for Bittern attempt number three. Annoyingly it wasn’t third time lucky, and it seems this species will evade my south-west Surrey year list.

Sunday was wet and windy, with few birds of note. Tuesley Farm and Winkworth were quiet; an Allden’s Hill vis-mig produced a flock of seven Lesser Black-backed Gulls south, which is a decent count for the patch. There was a slight shuffle of the very poor winter Snowdenham Mill Pond pack: four Gadwall and two second-year Mute Swans were ‘new in’, as were a further two swans on Bramley Park Lake.

Unstead SF offered a better selection later on. Two Little Grebes were most noteworthy (the heavy rainfall of February to thank for that), but best of all was a pair of Stonechats in the South Meadow. Despite first visiting Unstead when I was in junior school, these were my first Stonechats for the site! It has certainly been a Stonechat year so far, and I’ve encountered birds at almost all of my regular sites. With no sign the following day, these we more birds on the move. 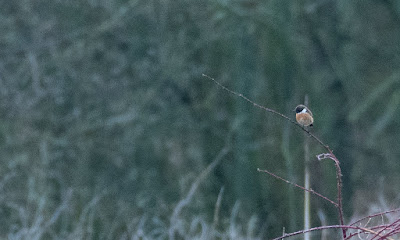 Another real surprise was a Lesser Redpoll over the South Meadow – just my fourth record of this species this winter (not including vis-mig birds in October/early November). A later visit to Bonhurst Farm featured little bar stockpiling Fieldfares, which are lingering here in good numbers. With a marked finch passage recorded in the country that day, I decided to experiment with a new vis-mig site the following morning …

… and what a promising spot it turned out to be. Standing on the North Downs at Loseley/Onslow, next to the Hogs Back transmitter, one is blessed with a mighty view to the south, as far east as Leith Hill, through the ‘Wey-Arun Gap’ beside my patch, the continuation of the High Weald at Hascombe Hill and west beyond the A3 to Blackdown. Wes had a superb finch session on the tower at Leith Hill; Steve G and I altogether less exciting watches, probably due to the clear weather not pushing stuff low. 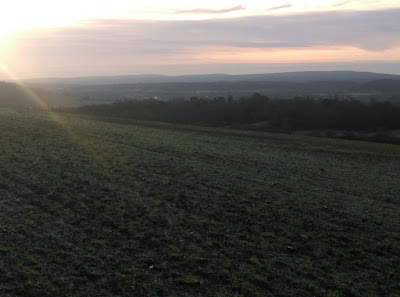 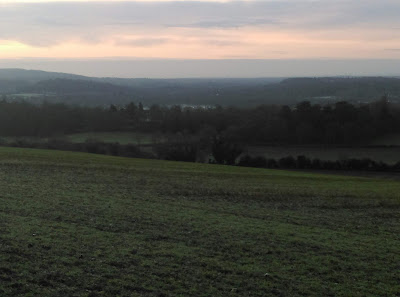 That said, it was satisfying to witness birds a) clearing using the downs ridge as a guide and b) north/south movement at height. Notable observations included a tight group of 10 sinensis Cormorants high north-east, an adult Great Black-backed Gull south, a steady trickle of Meadow Pipits and Redwings (53 and 40 in total respectively) and a flock of 16 Starlings east.

In fact, it was a really fun and dynamic session, including birding the downs farmland, the copses in Loseley Park and the ponds – other highlights included two Yellowhammers (both Cirl and Corn Bunting used to breed here … ), a singing Blackcap by the transmitter, nesting Grey Herons, 10 Egyptian Geese and five Chiffchaffs. A top area that would make a quality patch.

A flock of 106 large gulls at Sandy Farm was most notable and I have noticed some here before, with birds generally roosting on the fields or feeding in the horse-churned mud. With large gulls at a premium in south-west Surrey (especially on the deck) I have certainly bookmarked this spot for the future – perhaps  there’ll be a slight renaissance of gull sites along the North Downs in south-west Surrey, after the Ring-billed and Glaucous-producing Runfold, Wrecclesham and Seale pits and landfill sites closed down before my time …

Today I did the patch first bells, failing to log any Lesser Spots, but counting 10 Greenfinches around Gatestreet Farm – a really super count after a few years of low numbers in the area. The rogue White Stork was knocking about in nearby cow fields too.

I then called in at Shackleford farmland where, to be delight, the main fields by the airfield had been ploughed. I was just waiting to pick out a Wheatear, but in fact did better – two totally spanking male White Wagtails probing about near a pool. What smart birds they are, and I rarely see them locally so was most pleased – they felt like my first true migrants of the year. Other bits included a few Linnets and Meadow Pipits, notably no Stonechats and also my first Mallard ducklings of the year at Lydling Farm. 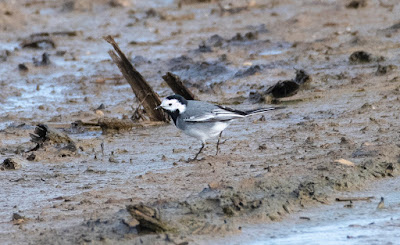 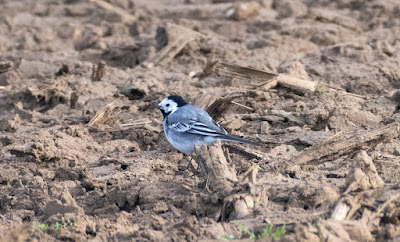 No Wheatear, but that will come. Local birding remains firmly on the menu in the short-term, but it seems inevitable there will be a period of one to four weeks during which leaving the house is going to be very difficult. As this looks set to fall in the busy spring period, it’s all likely to be rather grim. But there’s no point dwelling on it.


Indeed, I’ve decided to hammer noc-mig from my house this year. There was an awesome Redwing movement on 10th – I’d noted a crazy number of calls on my walk back from the pub, and the recorded picked up 245 vocalisations during the rest of the evening. A Barn Owl on 16th was even more remarkable. This virtual reality birding might be what keeps me sane in a few weeks!
Posted by Ed at 12:04