The past week or so has shared many similarities weather-wise to the seven days that preceded my last post, which commented on the autumnal feel. It’s rather strange for early July – vis-mig, waders and finches shouldn’t really be the main sources of action at this time of year, but this is how it’s been …
I’ll start with vis-mig, and one of the greatest spectacles I’ve enjoyed while watching the skies locally, which took place on Thursday 9th. There was a breezy south-westerly, grey skies and light showers – similar conditions to me decent vis-mig at Thorncombe Street the Sunday before and the best July weather for inland Swift and wader movement.
After a slow start, between 6.20 am and 7.20 am, I was treated to a rather spectacular (for Surrey!) movement of Swifts over Allden’s Hill, all heading west/south-west. This was made up of three lines – one overhead/just to my north, another to my south through the valley and a third further south tracking the High Weald Ridge. The passage was very much happening in waves with often several minutes of no Swifts at all. 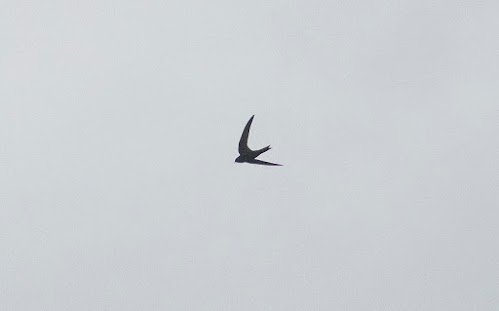 The smallest flock 8 birds; the biggest was a spectacular c.200 immediately after a front passed through, during which time a constant line of Swifts ploughed through on each movement line. I probably undercounted and the final count of 531 is a easily a record count for Thornombe Street. Once things brightened a bit at about 7.30 am things stopped dead. It had been brief, but totally spectacular and I won’t forget it in a hurry. The rest of the watch was quiet, save a Common Tern, an interesting south-west trickle of Black-headed Gulls and three Ravens.
At the private site near Tuesley, the first autumn trickle of waders has continued, after things duly began with the two Redshanks on 1st. Another Redshank dropped by during this past week, as well as two Common Sandpipers and, best of all, a summer-plumaged Dunlin – my first for the site and an extremely handy south-west Surrey year tick (number 145). 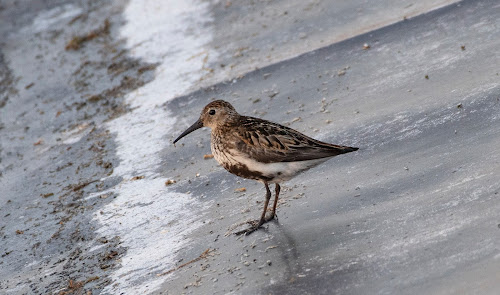 The Redshank was on 10th and looked rather tired, sleeping soundly when I left it. The Dunlin, on the evening of 11th, was much more active and exceptionally tame as it fed eagerly on the edges – no surprise it moved on overnight. Present at the same time as the Dunlin was a particularly curious Aythya hybrid. Aside from clear Pochard genes I was stumped at the time, but research since suggests it’s a Pochard x Rosybill … 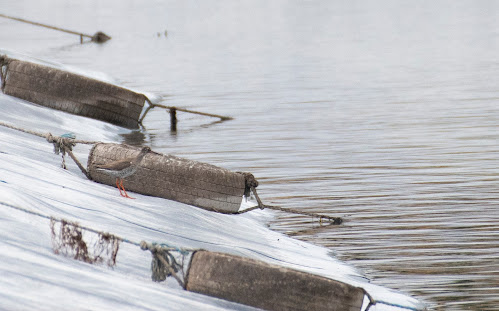 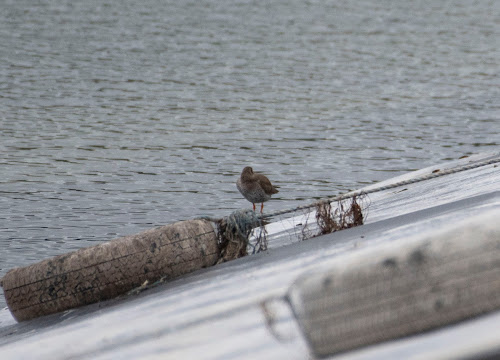 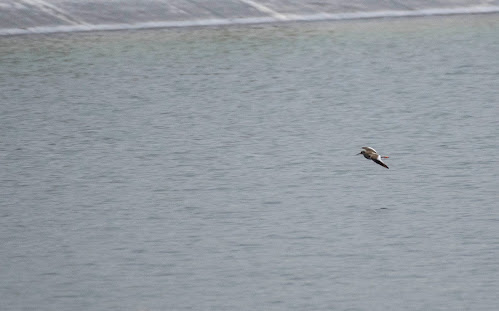 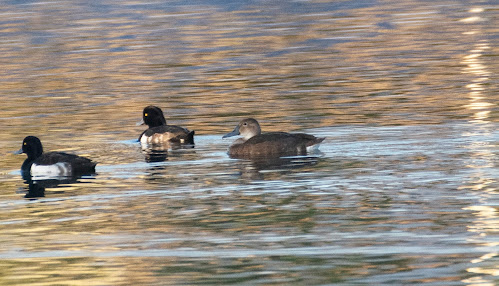 Otherwise it’s been all about the youngsters at Tuesley – at last 11 Black-headed Gulls have now fledged along with, pleasingly, three Common Terns, with the adults particularly aggressive at present. Today, I counted 16 Pied and six Grey Wagtails, mainly juveniles. 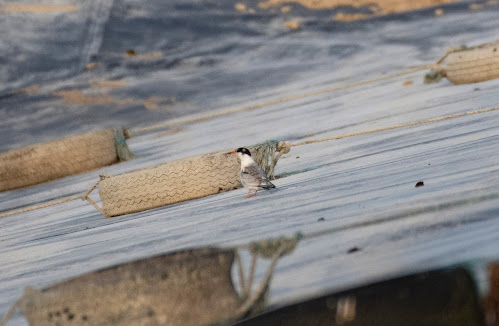 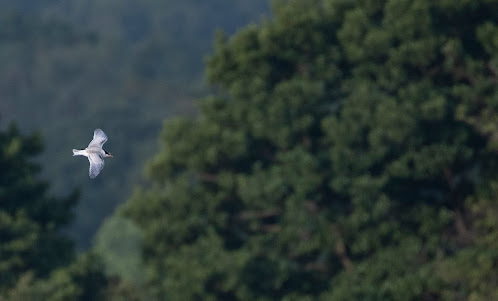 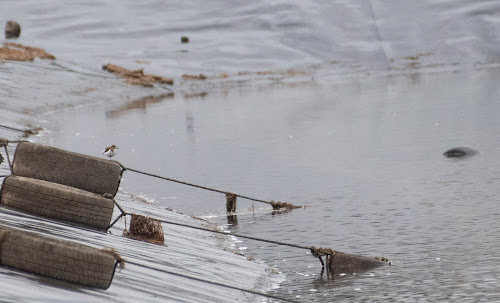 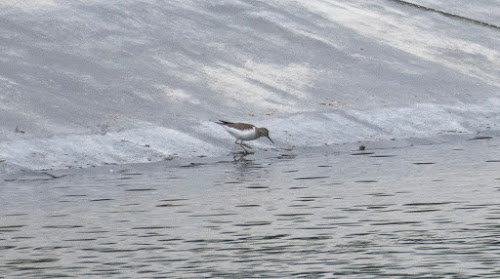 As for the finches I mentioned, then that’s regarding the excellent numbers of Crossbills around at present. On 7th I had six fly over Thursley – amazingly my first for the site and subsequently my 100th Thursley bird. Despite the destruction caused by the fire there was plenty of life here, with heaps of fledglings among a count of 19 Stonechats. I also noted young Tree Pipits, Dartford Warblers and Redstarts, as well as food-carrying Woodlarks.
Another visit to Thursley on 12th offered more of the same, plus a few unexpected species for July, namely Little Egret (a juvenile on Pudmore), a squealing Water Rail at the same spot (where they’ve bred) and 'singing' Snipe on both South Bog and Pudmore. Failed breeders, I suppose, half-heartedly holding territory during the last dregs of autumn. A Tufted Duck with a brood of five was nice to see also. 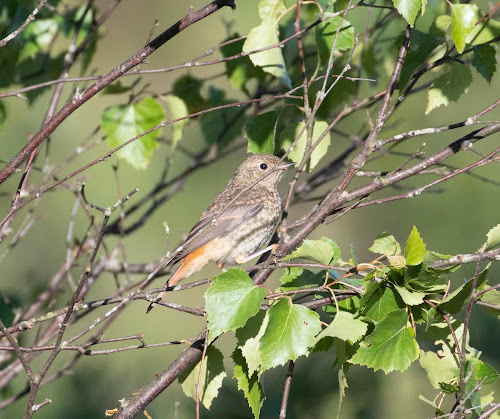 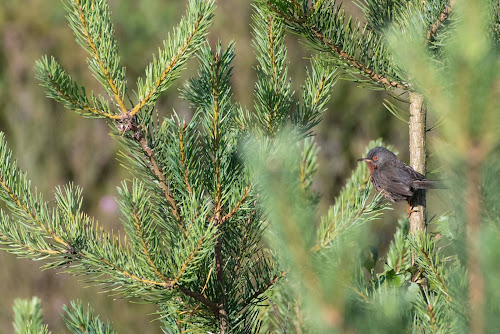 Other Crossbills have come at Chiddingfold Forest (where I had little else of note apart from two Marsh Tits and a Tawny Owl) and at The Hurtwood. The latter site continues to amaze – in a half-hour walk there on 6th I espied fledgling Dartford Warblers, Tree Pipits, Stonechats and Woodlarks, as well as the Spotted Flycatcher pair, five Siskins and the 15 Crossbills. Not bad for a forestry plot and proof of how life can be drawn to Greensand Hills if a bit of clearance is undertaken. 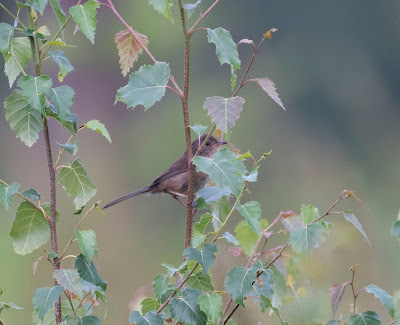 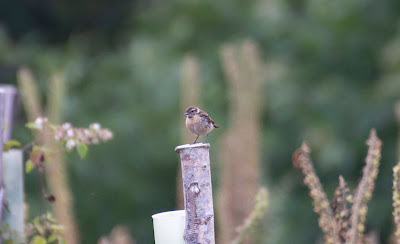 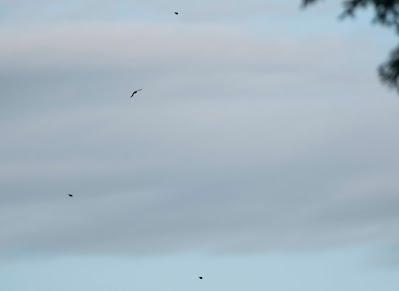 Other bits include the reappearance of the Barbary Dove in Farncombe (which I managed to photograph but not sound record) and confirmation of Lesser Whitethroat and Nightingale breeding at Painshill Farm/Telegraph Hill, Dunsfold, a site not previously known for either species.
Finally, yesterday, with Kit and Sam keen to add Common Scoter to their ever-growing Surrey lists, I decided to jump in and join them on a trip to Island Barn Reservoir. Here a drake was showing at great range in weather you wouldn't really associate for inland seaduck – my second in the county. We also logged an Oystercatcher and a Common Sandpiper.
Posted by Ed at 08:52