A Wryneck amid the westerlies

I’ve often found that September flatters to deceive locally. I’ve seen some great birds nationally, but inland, and especially in my little part of Surrey, there never seems to be anything too exciting. August, October and November seem to be the best autumn months around here. Westerlies can compound this underwhelming feeling so, having emerged from week one of September 2020 with a local Wryneck under my belt, I’m pleased to say the least.

Two Shoveler and a Teal were of note at Snowdenham Mill Pond first thing, having picked up the noc-mig gear nearby from a failed Ortolan stakeout. Impressive wagtail numbers at Tuesley included four Yellows amid some 72 Pied and nine Grey. A fine haul at Shackleford afterwards gave the continued impression of a site coming up to the boil … Spotted Flycatcher, Whinchat, Wheatear, Willow Warbler and 10 Yellow Wagtails were logged.

In the late afternoon, Sam and I headed south with declining hopes of seeing his first UK Pallid Harrier, and only my second, at Thorney Island. By the time we got there the bird hadn’t been seen for hours since it flew strongly south-west, so we decided to explore the Chidham Peninsula. Deep in Chichester Harbour, I reckon this spot feels rare and certainly some of the habitat out towards Cobner Point looks ideal. My concern is that it may be a bit too tucked in from the sea proper to be too productive.

That said, migrants were clearly present, with a male Redstart, Spotted Flycatcher, Sand Martin and 19 southward bound Yellow Wagtails all noted. We also saw a first-winter Yellow-legged Gull, a Greenshank, a couple of Sandwich Terns, eight Whimbrels and a surprise covey of 10 Grey Partridges.

That evening, putting the noc-mig gear up again (for another night of no Ortolans), a relaxed Tawny Owl sat out for a while in Munstead, allowing for a very low quality iPhone picture through the car window.

With the only easterlies of the week gently blowing in overnight, it felt good. Snowdenham Mill Pond had one Shoveler and three Gadwall, before I headed to the countryside around Dunsfold. It was a bit foggy at Painshill Farm, but two Tree Pipits included a grounded bird and were a site first for me. A party of six Bullfinches was nice, but otherwise it felt promising – but quiet. Two Yellowhammers and 27 Red-legged Partridges were also seen.

The sun was out by the time I got to Shackleford. Not there long, I bumped into Steve, and we walked the west side together, noting a Whinchat in the alfalfa. We parted ways and I headed towards Hurlands, before working back along the main track. Close to the car, I flushed a smallish bird from the grass verge, before yelling “Wryneck!” to my partner.

The split-second view didn’t remove the excitement, though knowing I had to be home immediately, panic set in. I couldn’t relocate the bird in the brief few minutes I had, so I text a few locals with a plan for a swift turnaround at home and return to Shackleford. Time passed and, to huge relief, Peter O managed to relocate the bird in the hedgerow.

When I returned, though, there was no sign, and we patiently walked the hedgerows until eventually it sat out – for no longer than 45 seconds – during which time Abel managed to arrive at the spot and enjoy good views of the bird as it posed in an elder. We watched it dive into the base of an adjacent holly bush and, to my knowledge, it wasn’t seen again. It had been an exceptionally elusive bird. 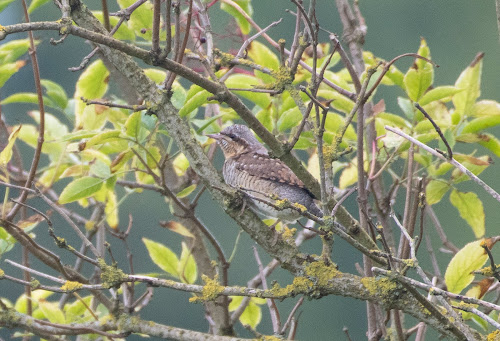 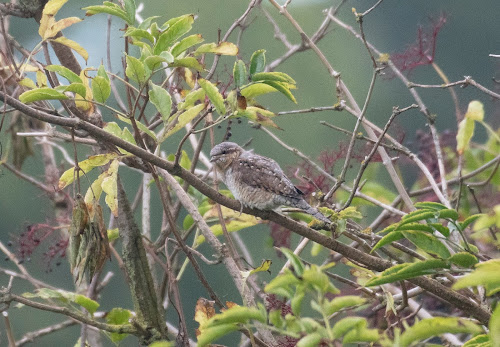 It was a manic but truly memorable local birding moment, and easily a highlight of this south-west Surrey big year I’m doing. Whether you’re on the coast or far inland, finding a Wryneck I always a delight. This was my first self-found, only my second in Surrey and my first in south-west Surrey. Furthermore, it took me to 148 for the year in the area – I can almost smell 150!

While we waited for the Wryneck to reappear (which of course it didn’t), we had a couple of flyover Yellow Wagtails, a Sand Martin amid a hirundine flock and jaw-dropping views of a Hobby take out a Swallow and depart north with it still wriggling around in its talons. A fantastic hour or so of local birding, all taking place fewer than 10 minutes from home.

After the excitement of the previous day, there was no time to get in the field. At dusk, a Grey Wagtail and three House Martins flew over the The Old Drum pub in Petersfield.

A long stroll around Thursley Common took up the vast majority of the morning session. The water levels at Pudmore are rather high at the moment, which doesn’t bode well for any September waders. Some 255 Canada Geese out of roost was a spectacle, as was at least 90 Pied Wagtails flushed from the reedbed by a Sparrowhawk. A Water Rail was heard.

A Wheatear was on Shrike Hill, an adult and juvenile Hobby was a pleasing sign of local breeding, a Raven flew over South Bog and two Spotted Flycatchers were near The Moat, in a mixed tit/warbler flock that also contained three Reed Buntings struggling to blend in. A Sand Martin flew over.

Tuesley was quiet, save a juvenile Common Tern.

I’m not sure why I chose clear skies and westerlies to undertake my first proper vis-mig of the autumn, but unsurprisingly it was dead over Allden’s Hill first thing. A nearby family party of Buzzards kept me entertained. Afterwards, Unstead SF too was quiet, with Willow Warbler and Sparrowhawk noted.

Shackleford, however, delivered some nice birds, chiefly a flyover Tree Pipit, two Whinchats, three Wheatears and three Yellow Wagtails. This site really is special and, as I often say to people who haven’t been, it’s the volume of common birds that hints to its potential. 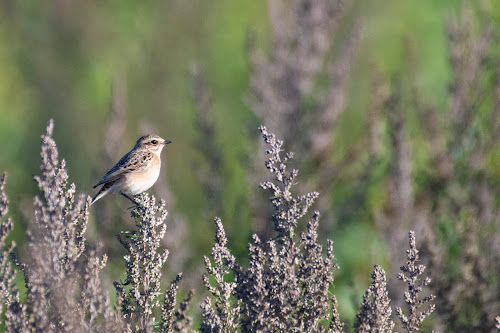 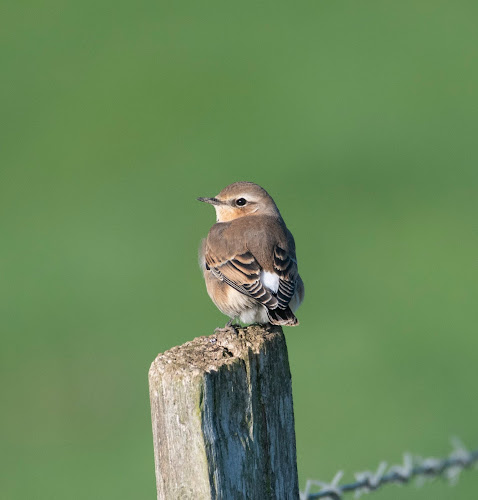 Some 70 Linnets were dotted around the set aside fields and the thick hedgerows either held tits and warblers munching on insects, Greenfinches and Starlings gorging on fruit or Swallows swooping low over the top of them. A pleasant walk. 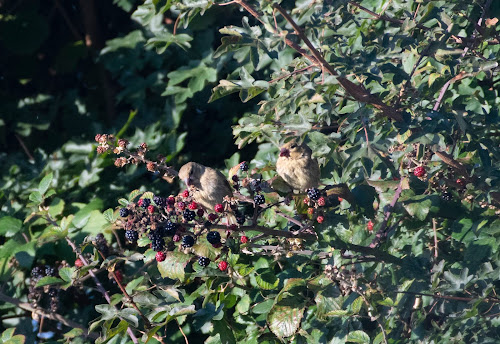 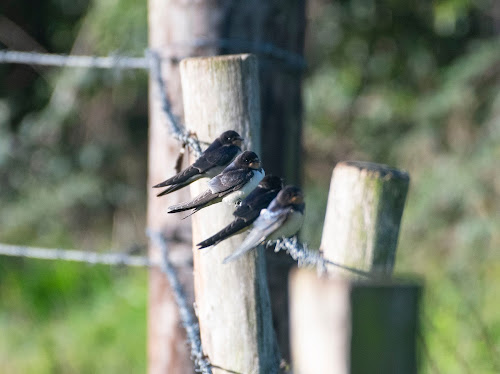 Later on, on my way to Kingston, I dropped by the Xcel Leisure Centre in Walton-on-Thames to make my long overdue pilgrimage to the area's decade-long present adult Caspian Gull. A real 'classic' cachinnans, sadly it didn't move from its favoured floodlight. It was only my second vice-county Casp. 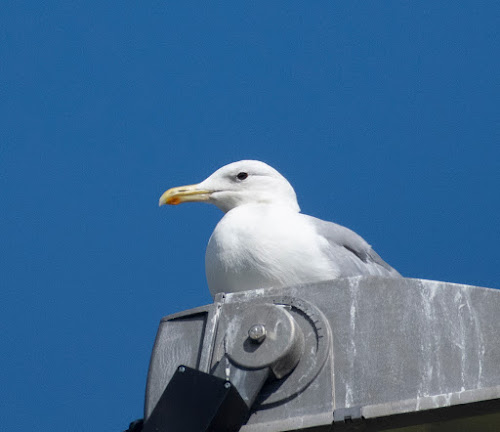 I’m still unsure if Shackleford would be any good for vis-mig so gave it a go from pre-dawn in suitable conditions. The answer: birds overhead, yes, but the site really is too low and has too much sky to make it a sensible option to visit solely for vis-mig. Furthermore, the A3 adds an unwelcome rumble and my sound recording efforts didn’t pick up the quality I wished as a result.

That said, a light Grey Wagtail (five) and Meadow Pipit (22) south-west passage was evident, eclipsed by some 11 Yellow Wags and a mighty 15 Siskin – the latter count may sound small, but it was my first record of the species at the site this year! Clearly, a big Siskin autumn is coming, when national totals since July are considered … On the deck, two Wheatears and three Whinchats highlighted.

Bizarrely, one of two gulls noted at Tuesley included a first-winter Yellow-legged, with a smart individual departing north almost as soon as it had appeared over the reservoir. My first for the site and my second locally this year. The water level is high here as well and that desired scarce wader, to cap off the fine run of long-legged characters seen at Tuesley this year, seems unlikely.

Later on in the morning, I met up with Janet, Keith, Russell and Sam to discuss Unstead issues. While walking the site, five Lapwings were seen (in Flooded Field), along with a Garden Warbler in the Lagoon and Siskin over the entrance track.

That afternoon was spent having a Sussex shocker. After dipping the Ditchling Beacon Dotterel (later seen, of course), with only a couple of Wheatear to show for an hour and a half at the site, I got to Pagham right on high tide. This meant no Curlew Sand, no Little Stint and not even any Spotshanks.

So, not a bad start to September. Aside from Black Tern at Frensham, this month offers little in the shape of obvious local year list targets. So, I'll probably focus on trying to find something unusual and get back into the happy habit of regular vis-mig.

Annapurna Base Camp Trekking is known as Annapurna Sanctuary Trekking as is an brilliant stroll thru diverse landscape and subculture complete with prosperous mountain vistas, terraced fields, quaint Gurung villages and a vast range of flowers and fauna during your trip with Treks Himalaya. Get the view of Annapurna Sanctuary Trek over three dozens of mountains trekking in Nepal. Mt. Annapurna (8091m) of Nepal is the tenth best possible mountain in the world and the journey to its base camp, which is at 4130m height, is one of the most popular walks on earth. The Annapurna Base Camp Trek is one of the most famous treks in Annapurna region of Nepal trekking. Moreover, we reach our destination by way of Mt. Machapuchhre (Fishtail) which is revered with the aid of the Nepalese for its special beauty and most popular treks in the world. Furthermore nicely groomed itinerary of the Annapurna Base Camp package, it is a famous preference amongst various outside enthusiasts, from a solo lady tourist to hikers visiting in agencies in Nepal. Many landscapes and convey you so shut to the base of 7,000 and 8,000 meter peaks around Annapurna Base Camp.
https://www.trekshimalaya.com/annapurna-base-camp-trekking.php