Things have been steady either side of the excitement of the Short-toed Lark last weekend. As has been a theme this autumn – indeed both passage seasons this year – the weather has been below average. I can remember few years in which there has been so little opportunity for good vis-mig by the end of September, for example. That said, I’ve managed a couple of entertaining watches and, in general, the local birding has been good during the past 10 days.

A day of non-birding until news broke of Surrey's seventh Glossy Ibis at Tice’s Meadow. With just enough time to get there and back before football, and having not seen the famous Frensham individual of 2014 due to university finals, I dashed over.

The bird was in The Workings and allowed distant 'scope views before it flew off high north-east about half an hour after I arrived. Good stuff, and with the Short-toed Lark and acceptance by the Surrey Bird Club Records Committee of the Burpham Pink-footed Goose from February 2019, I’ve managed a sweet hat-trick of county ticks recently. 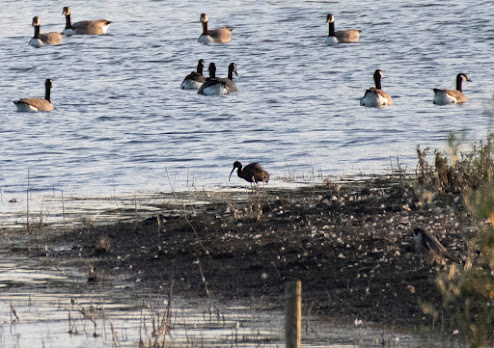 Also at Tice’s was a lonely Golden Plover in The Meadow, singles of Common Sandpiper, Wigeon and Yellow Wagtail, two Snipe and a Peregrine that performed nicely over Horton’s Mound having been sat in the same 'scope view as the ibis. 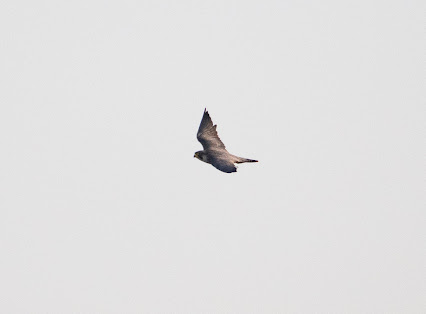 In Bristol for the day and evening but managed an hour at Pilning Wetland, where three Little Stints and a Garganey highlighted in a stiff north-east breeze. I failed to spot the Pectoral Sandpiper that had been there a while, but other bits included Curlew Sandpiper, Knot, four Yellow Wagtails, Wheatear and 200 Linnets.

Back to the Love Shack again, to try and score the female Merlin that was present the previous for my south-west Surrey year list. No joy for me – only a couple of male Sparrowhawks, despite others seeing the Merlin – but I did manage a late-ish Spotted Flycatcher, six Reed Buntings, 30 Siskins, two Lapwings and, best of all, a Woodlark in the big ploughed field, which was a new Shackleford bird for me.

A long-awaited change in wind direction meant it was a day for vis-mig – and it delivered. A really good three-hour watch at Thorncombe Street felt more like late October than late September, with two Hawfinches and my earliest ever Surrey Brambling highlighting. A male Ring Ouzel, that bombed in from great height to the east, was a south-west Surrey year tick – the last of my ‘expected ones’ – taking me to 151. 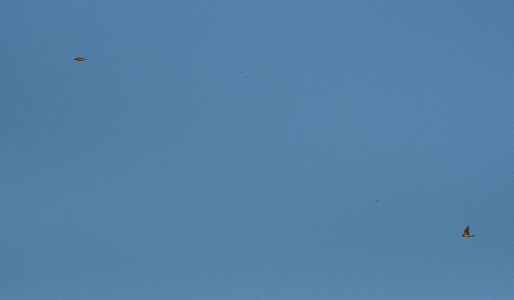 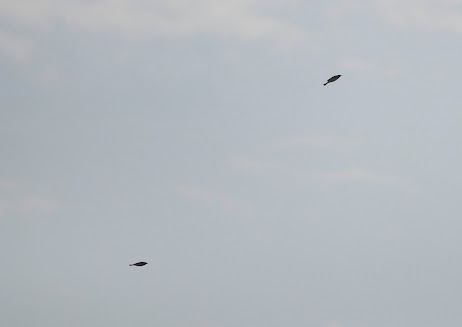 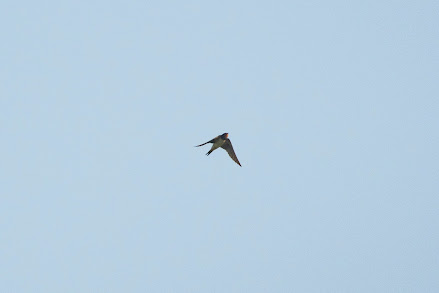 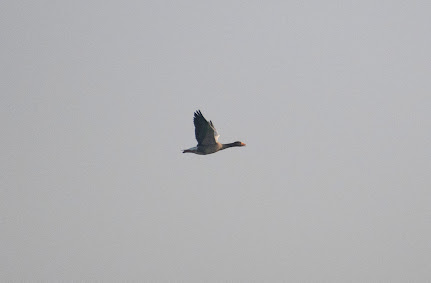 Decent Meadow Pipit action totalled 477 birds south, most flocks low and fast, and was my second highest vis-mig count of the species here. Some 225 Siskins moved south, along with three Yellowhammers, 15 Lesser Redpolls, 16 Crossbills and 292 House Martins. My vis-mig Grey Wagtail record count was broken too, with 10 going south-west.

On a recently ploughed field at Tilsey Farm, 40-odd gulls were mainly Herring and Black-headed, save two Lesser Black-backed. One of the latter was very eye-catching: small and very dark-backed. A possible intermedius candidate, probably an advanced second-summer / third winter ... 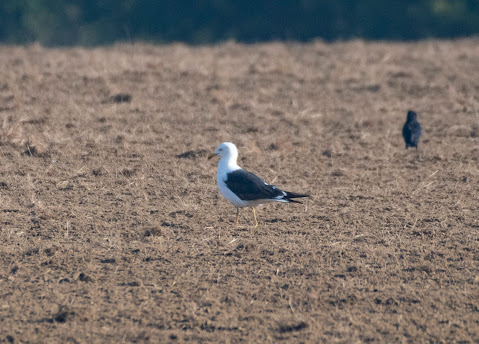 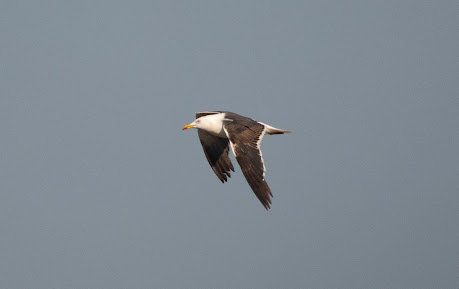 Steve and Kit joined for a Thorncombe Street watch and hopes were high with perfect conditions. Sadly, it was a bit of a let-down, even if 388 House Martins south included some big flocks. There appeared to be some Stock Dove movement, with 55 south, and 86 Siskins and 76 Meadow Pipits showed signs of action. The highlight, though, was a single Redwing that powered south-west – an early record.

Other bits included Tawny Owl (heard pre-dawn), two Ravens and a Blackcap. Steve trapped and ringed three Goldcrests and a dopey juvenile Woodpigeon. Later on, a vocal Raven flew over while working at home.

A misty and breezy start which didn’t look like being good for vis-mig. Four Gadwall were on Snowdenham Mill Pond before an intended cursory look from Allden’s Hill made it clear some House Martin action was underway. Some 855 south-west in the following two hours was a very decent count for here, but nothing close to the big totals John and Wes scored at Bricksbury Hill and Leith Hill. Aside from this push, there were no other signs of migration.

Despite the chilly north-west wind, a very enjoyable two-hour walk around Thursley was had from dawn. The clear highlight was the astonishing amount of Lesser Redpolls – 170+ to be precise – really crazy numbers, especially given it's only September. I’m unsure if I’ve ever seen so many in Surrey before. 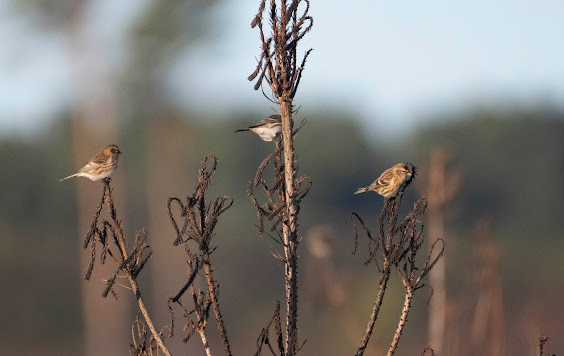 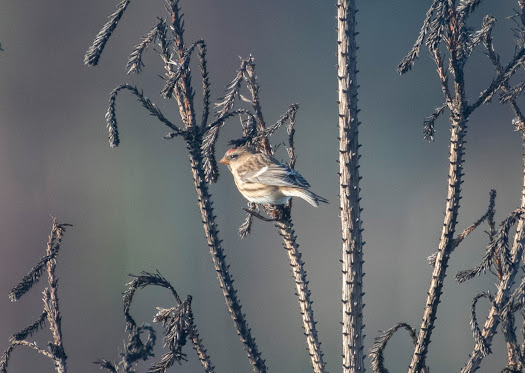 One mega flock of 120+ was by Pudmore at dawn (a group found by Dave the previous day), with a another gathering of 30+ nearby, groups of one to five in flight all over the common and another 30+ with Linnets and Meadow Pipits by the burnt area of Ockley. The true count was probably more like 200+ and indeed Dave reckons he had 250+ the following day.

Very nice to see, especially after two wretched winters for them around here. But where have they come from? I must say there seem to be many more finches around this autumn – perhaps they have had a good breeding season? Or maybe the unseasonal northerly weather that has been a theme since the August Bank Holiday just means they are here earlier than usual.

Other highlights included 18 Crossbills, including a singing male, six Red Kites out of roost together, Snipe, five singing Woodlarks, Raven and 120+ Pied Wagtails out of their Pudmore roost. A walk of Shackleford before dinner was exceptionally windy and I failed to tally more than 20 species, but surprisingly a late Whinchat was present with a group of Stonechats. 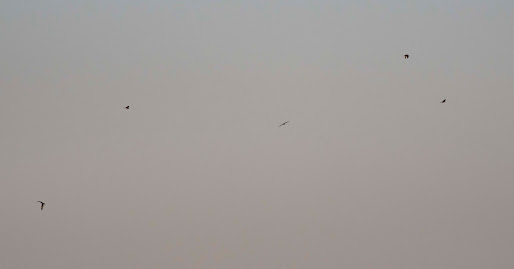 A lazy start in increasingly strong and cold north-westerlies. At Tuesley Farm, 11 Little Grebes and nine Tufted Duck were present. Snowdenham Mill Pond hosted the female Red-crested Pochard – my first sighting of her since late May – and one of her hybrid offspring, as well as five Gadwall and a Siskin.

Sam and I teamed up to walk Thursley late afternoon. The Lesser Redpoll flock couldn't be found, but 13 Snipe flushed from Pudmore was a decent count. A few small groups of Crossbills were about and eight Swallows moved through.