I'm bored. Lockdown and winter both seem to be dragging on at the moment. The former isn't great and I've never liked the latter. I normally fill January with a sunny trip somewhere – recent examples include Cyprus, Florida and Israel. Right now, going to Sussex would feel like the adventure of a lifetime. For the first time in a long time, local birding isn't inspiring me particularly. This is partly the annual January blues, but also what can only be described as 'local birding fatigue', especially after such an intense 2020. Thankfully, though, the days are already getting longer and the good birding times will soon be back.

A Sparrowhawk was seen from the kitchen window late morning.

A Robin singing bravely during Storm Christoph was the best I could muster from home.

A bright morning but with a breezy south-westerly. I suspected the Wey had flooded so headed over and walked Unstead Water Meadows, where indeed vast swathes of the site were submerged. Some 200 geese were mainly Canadas, but 70 Greylags and two Egyptians were present too. There was nothing rarer among them, though a drake Gadwall was a good record – this is always the most likely duck to pitch up along the river during floods. For some reason the water meadows don’t do well for ducks, even when the site looks like Pulborough Brooks as it did today. I’m not sure why this is.

Other bits included five Little Egrets, a big female Sparrowhawk, a Kestrel, eight Siskins and a Kingfisher. Later on, the Blackcap piped up again in the garden, along with two Coal Tits.

A glorious, cold and bright winter’s morning and a fine one to be on Thursley Common. It was nice to have some time alone with the buntings: all three were performing at ‘Bunting Bushes’, including the vocal Rustic Bunting which allowed for some sound recordings. My main attention was on the Little Bunting I found back in October, and I spent most of my time observing this rather shy bird. The other Little Bunting does seem brighter and more boldly marked and I wonder if they are male and female. They seem fairly tight with one another and, interestingly, I had them together in flight over the tumulus later on, away from the usual spot … 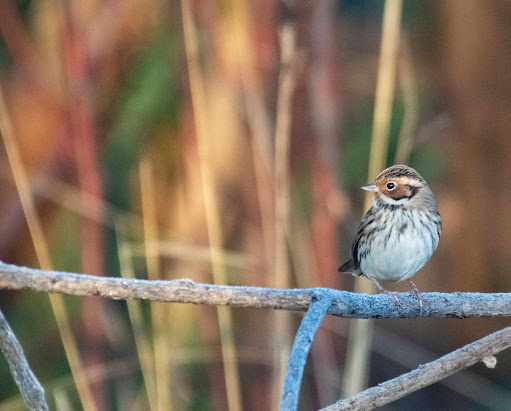 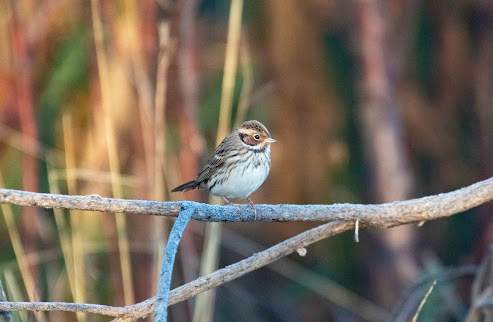 Other bits noted included three Ravens (including a tumbling duo), at least 15 Crossbills, five or more Lesser Redpolls and a couple of high-flying Herring Gulls and Cormorants. Two Kingfishers and a mewing Buzzard were at an otherwise quiet Forked Pond. For a cold midwinter’s day, decent numbers of Woodlarks were noted and included at least three singers. A couple of Skylarks overhead were probably indicative of the cold weather. A new scrape that’s been dug out at Francis Copse may be productive come spring. 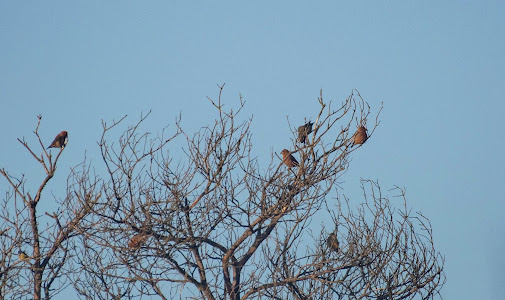 There was a moderate frost this morning but blue skies slowly broke through, and it ended up being a fairly pleasant walk around Shackleford. To my surprise, some of the first birds seen were the Grey Partridges – all eight of them were sat distantly at the north end of the northern fields. Here and the alfalfa held the usual fare, including two raucous Ring-necked Parakeets flying around, and again it was the cover crops to the west that produced most of the action. A male Sparrowhawk ghosting through allowed me to count 70 Chaffinches in the big flock, along with four Bullfinches and two Yellowhammers. Some 10 Teal were on the reedy pond and an overhead Grey Heron was my first here this year.

The forecasted snow hadn’t materialised between sunrise and the time I arrived at Shackleford some 45 minutes later. However, as soon as I started walking the fields it began to fall, slowly at first, but it soon turned into quite heavy stuff. This transformed the area into a veritable winter wonderland.

The site is the best in south-west Surrey for Golden Plover and, given the inclement weather this species is associated with locally, it was perhaps no surprise when one whistled its discontent overhead as it moved north-east just ahead of the heavy snowfall. During the course of the walk, some 13 Lapwings moved in the same direction too. Otherwise it was business as usual, with another Stonechat pair on the Chalk Lane field (as well as the regular Lone Barn track duo), a female Kestrel and 70 or more Fieldfares.

At home, I kept an eye on the window during the day. Four species of gull included five Lesser Black-backed, all heading north-west. I also scored Peregrine and Sparrowhawk but best of all was two high-flying Snipe heading south down the river. Sam had reported birds commuting between the water meadows due to the snow so presumably this is what these two were doing.

It was freezing cold at Shackleford at first light as large volumes of snow and ice remained – I couldn’t feel my toes by the end of the walk. Hoped for cold weather movement failed to materialise though there was a clear increase in gulls, including eight Lesser Black-backed and, best of all, two distant Great Black-backed that headed high west following the High Weald Ridge. A very good bird locally, it generally takes hard weather or prolonged watching during early spring passage to connect (see here).

Also, some 100 hardy Skylarks were in the alfalfa, a Siskin and Kestrel flew over and a male Sparrowhawk shot through. Afterwards, Enton Ponds were largely frozen, and the highlight was five incredibly tame Robins – presumably used to generous anglers – performing well in the winter sunshine. 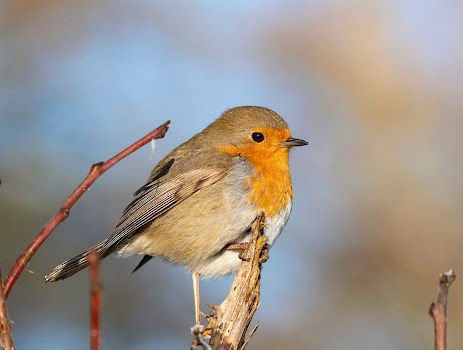 A flock of 30 Lapwings were on the Stakescorner Road fields at Loseley during a short bike ride in the morning. It’s been a poor winter for the species locally, with this my first double-figure count on the deck since January 2020. They were also my first at Loseley since November 2019. A male Sparrowhawk was perched in a nearby tree.

Two male Sparrowhawks flew over the garden together at midday.

It was much milder than late (enough to tempt the garden Blackcap into song) with a strong south-westerly breeze. During a bike ride break, a quick scan of Flooded Field at Unstead SF produced four Little Egrets, including one bird that was exhibiting territorial or display behaviour – a weird spate of bowing, which I’ve not seen before locally. Singles of Red Kite and Sparrowhawk flew over, the latter of which put up a flock of 30 or more Pied Wagtails, and a Treecreeper sang nearby.

At dusk, a Woodcock flew from the alfalfa at Lydling Farm.

I walked along the River Wey towpath from home to Unstead late morning, as a breezy north-easterly blew and the morning's heavy rainfall slowly eased off. The river meadows between Catteshall and Peasmarsh were heavily flooded and so plenty of birds were in. The best of these was two Shoveler – adult and second-year drakes – which is a very good bird here. Two Mute Swans, a species only usually recorded on the river here, were enjoying the floods too, along with five Little Egrets and triple-figure counts of gulls and geese. Two Bullfinches and a Chiffchaff were present along the towpath. 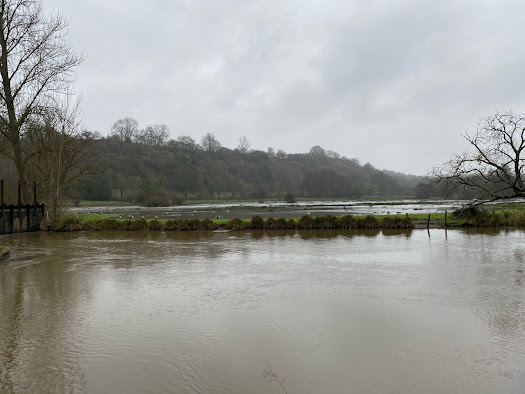 The rain eventually ceased at around 11 am and I continued on to Loseley and then Compton, where I spent a bit of the time with the big large gull flock at Sandy Farm. I know I often bang on about how uncommon large gulls are in south-west Surrey, but it really is true, so a count of 145 Herrings was really notable. Try as I might, though, there was nothing scarcer, aside four Lesser Black-backed. Some 12 Skylarks included two singers and a flock of nine in flight, and a Firecrest was in the holly stand by Watts Gallery. On the way home, a Lapwing was espied along Stakescorner Road.

A much brighter morning, though it was cold and there was a light frost. Again I walked along the River Wey between Peasmarsh and Westbrook. Flood levels were down a bit but there was a decent selection of birds (as much as can be expected within 1 km of home, at least) at Unstead Water Meadows: three each of Mandarin, Shoveler and Gadwall, a couple of Little Egrets and some 35 Pied Wagtails on a temporary pool. A Fieldfare, uncommon here, was perched beside the towpath and a Reed Bunting sang from the Tannachie reedbed. A mighty flock of Siskins was in the alder copse and adjacent gardens near the outfall stream, with many dropping onto the path to drink from the puddles and take grit. I estimated 250 birds but there may have been well over 300. 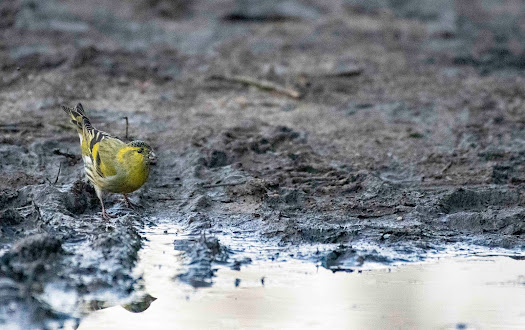 Continuing on to the Lammas Lands, I added Stonechat, Feral Pigeon, Snipe, House Sparrow and Kestrel to the morning list, making it 48 species in total along the river. The clear highlight, however, was a Lesser Spotted Woodpecker, picked up in flight and seen perched briefly before melting away, like they do. I couldn’t relocate it despite a decent search and a Song Thrush teased me by mimicking its call (it also performed Green Sandpiper and Marsh Tit!).