It’s been a cold first half of February. A mini ‘Beast from the East’ took hold over the last week, freezing local waterbodies and causing a bit of cold weather movement (though not on the same scale as 2018). Most inland counties cashed in on something notable, whether it a scarce duck, wader, grebe or seabird, but this corner of Surrey seemingly missed out. Still, there have been some nice Lapwing flocks, plus a few little extras, and it’s not impossible that reorienting birds will appear in the coming days. Plus, given the general feeling of mundane that's surrounded the start of the year, it was good to feel like something could happen. And it’s not long until the first days of spring, when that hopeful feeling is permanent.

A particularly gloomy morning: cold, dull and damp. I can’t say I have the same affinity for Broadwater Lake as my friend Sam, despite it being less than 700 yards from my front door, but I had a poke around this morning for a change. There was very little of note, though a drake Tufted Duck circled overhead. On the River Wey floods over the road, a quick scan produced three Mandarin, Coot, Kestrel and Little Egret.

Some 30 or more Greylags, presumably disturbed from the Loseley area, were seen in flight from the kitchen window and included two that went low over the roof.

The male Blackcap sang again in the garden for a short while at lunchtime.

I got to Thursley Common early and enjoyed a pleasant 9 km stroll across much of the site. A gentle south-easterly meant there was some fog but the odd bright spell pushed through, before drizzly showers wrapped up proceedings by late morning. The clear highlight was watching a second-year Peregrine – always a good bird at Thursley – stoop for and narrowly miss catching the Great Grey Shrike on Ockley Common. Thankfully, the shrike seemed unperturbed and was later showing relatively well on Shrike Hill. 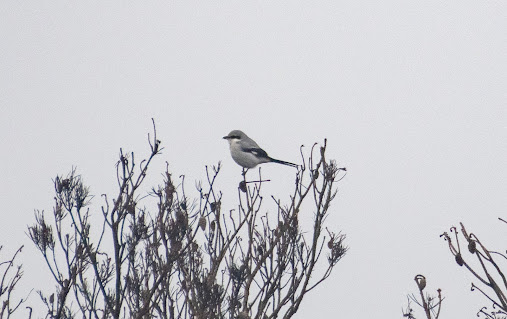 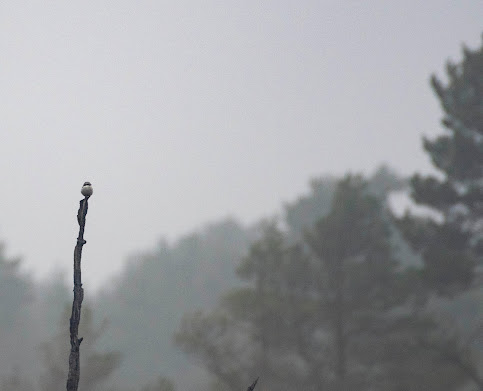 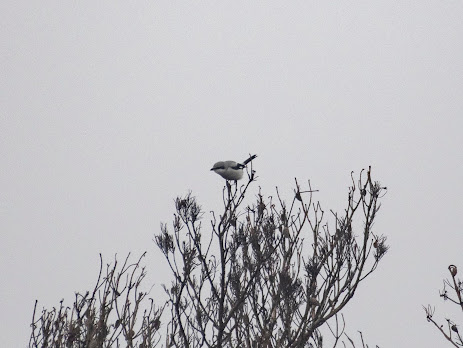 I managed to hit a pleasing 52 species in total, with 11 of these singing, including a few Woodlarks. Other notable stuff included two Kingfishers and a Little Grebe at Forked Pond, Snipe, two Egyptian Geese, some 15 Lesser Redpolls and two flyover Crossbills. While passing through the village on the way home, House Sparrow and Collared Dove proved nifty Thursley year list additions. 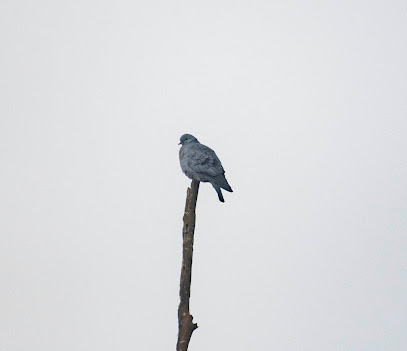 There wasn’t much to report from Broadwater when I passed, though it was a fine morning as the mist burned off and an adult Great Crested Grebe looked especially regal on the lake. It was veritably spring-like by the time I got to Unstead SF. The Flooded Field held singles of Little Egret and Coot (the latter a modern-day USF rarity!) as well as two Egyptian Geese and a flyover Lapwing. Three Teal circled overhead before departing west.

At the farm itself, the sunshine had tempted a few species into song, notably Blue Tits, of which several birds were seen performing their little display flights across the path. Two each of Reed Bunting and Chiffchaff included singing birds and the Cetti’s Warbler also piped up – indeed, it even showed in the bank between the two lagoons. A Grey Wagtail flew over but was vastly outnumbered by 75 or more of its Pied congeners in the Works.

Thick fog had rolled in overnight and Tuesley Farm was a bit of a pea-souper, though the sun was valiantly attempting to break through. A flyover Lesser Redpoll was the best bird, with Grey Heron, three Little Grebes and a small flock of Siskins also noted. On the way back, I stopped briefly on Allden’s Hill, Thorncombe Street, to take in the view of the mist shrouded valley – rather atmospheric with an especially loud Song Thrush singing mesmerically behind me.

Passing Combe Farm, a flock of 70 or more gulls included an adult Lesser Black-backed (good on the deck at Thorncombe Street) and two first-winter Common Gulls among 50 adults. Finally, I had a quick look at Broadwater Lake, and was surprised to see three Pochard asleep with a drake Tufted Duck. This duck is decent currency anywhere in south-west Surrey away from Frensham or Enton. A male Kestrel and a flyover Reed Bunting were noted on the old golf course.

A Siskin flew over the garden late morning.

A bitterly cold walk to Broadwater and back, in lightly falling snow and a biting north-easterly, produced a Fieldfare and a Great Crested Grebe. Later on, as the cold weather movement reports began filtering through from further east, I kept an eye on the window while working at home. Some 55 Lapwings heading west was the reward and included a big group of 35. Four Teal was a surprising sight as they careered high west, and a Mute Swan headed north.

After a decent day of cold weather action in Surrey yesterday, there was high anticipation going into Tuesday (the third day of hard weather is often considered the best for movement). Wearing many layers, I headed to Thursley. The first hour or so was dead – moderate snowfall, a biting wind and hardly any birds, save a few gulls overhead and two Egyptian Geese on Pudmore. However, at about 09.20, the first Lapwing group flew west and by the end of the session I’d counted 188, including two especially large flocks moving in front of the North Downs. Three birds even dropped in, and pottered about rather incongruously on East Bog. Not quite the 700 birds Wes managed over Capel, but given the scarcity of Lapwing at this site (something even pointed out by a non-birding dog walker) I was pleased. 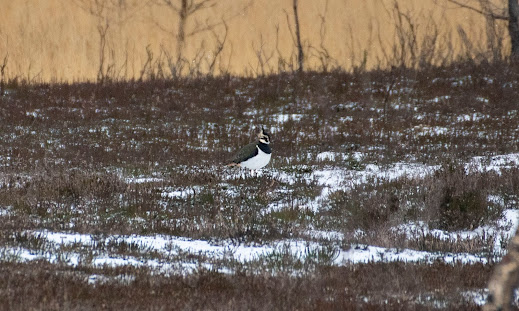 Two Ravens circled over High Ground, a Kestrel hunted above Ockley, a few rather anxious looking Dartford Warblers were seen in odd places (such as atop pines; these guys will doubtless take a hit in the coming days) and the Great Grey Shrike was being mobbed by a group of small passerines on Long Island. I thought the most unexpected sighting of the morning would be a Sparrowhawk pair fully displaying in the wind and snow but they were outdone a little before 10:30, when a flock of 11 Golden Plovers flew low south. A nice Thursley tick for me (and the first site record since April 2017) and a pleasant conclusion to a freezing cold morning.

With plenty of inland waders being reported yesterday afternoon I tried my luck at Tuesley first thing. The drop in wind meant 0 Celsius felt veritably balmy; there was little frost and most snow had melted, too. Aside the disconcerting sight of an Egyptian Goose on one of the tern rafts it seemed a typical midwinter dead visit, until I espied a wader hunkered down in the corner of the reservoir: a Green Sandpiper. Undoubtedly an artefact of the cold weather, this was an odd record and only my second here – it is in fact quite uncommon at Tuesley, averaging less than one a year. I left it in peace. I passed the noisy Siskin flock by the campsite on my way out. 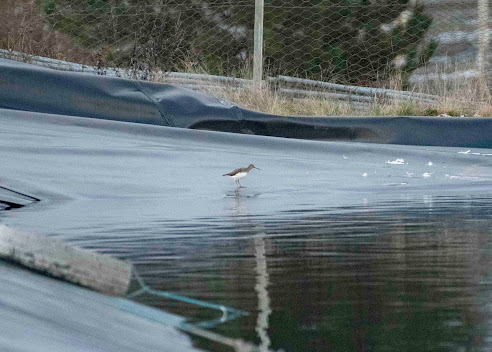 On the way home, I quickly checked the fields along Stakescorner Road at Loseley. Here, some 67 Lapwings were counted – as far as I know the best local count all winter. If an 'on the deck' Golden Plover is to occur in the coming days, I’d fancy it to be here. Two Egyptian Geese and a Moorhen also made the notebook. Later in the day, with the sun out, the male Blackcap confirmed he’d made it through the last few days as he burst into brief song in the garden. 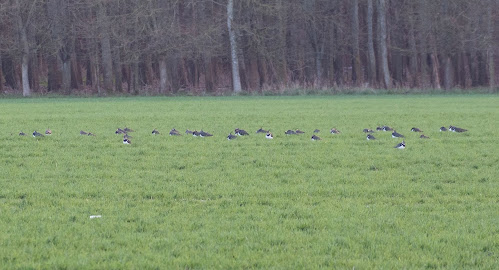 It was bitterly cold at Shackleford, despite the sunshine, with a hard frost engulfing the landscape. However, there were a few birds around including the usual flocks of Fieldfare, Starling and Skylark. In fact, the latter was one of three species in song, along with Red-legged Partridge and Great Tit. It was interesting to observe both Red Kite and Carrion Crow stoop at the passerine flocks – perhaps a result of limited food availability at present?

A flock of some 25 Lapwings were acting skittishly in the northern fields, three Stonechats bravely tried to find something for breakfast, a pair of Kestrels were present and a group of 35 or more Linnets were in the weedy margins. Despite the chill, the reedy pond by the village was partially unfrozen and thus 15 Teal and about half that number of Mallard gathered there.

After sunset, I was treated to a rare local sight: a quartering Barn Owl, at a location new to me. Despite the rather stiff breeze and very cold temperature, albeit under a clear sky, the bird carefully picked its way over a scrubby meadow before melting away into the night. 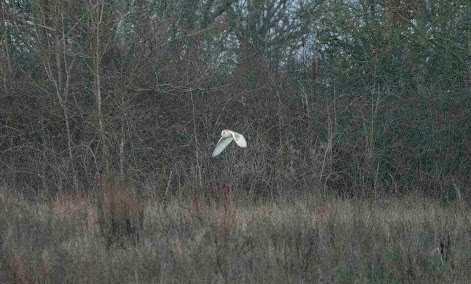 It was bright, breezy and extremely cold indeed at Unstead SF mid-morning. It was also very quiet on the bird front: a Stonechat was rather curiously in a garden at Unstead Manor, a couple of Greenfinches sang, a Lesser Redpoll flew over South Meadow and the big Pied Wagtail flock was still in the works.

Another freezing cold morning, with the strong easterly enough to make your eyes water. The Green Sandpiper was again at Tuesley, suggesting that this was a bird that roosted elsewhere usually (probably Pudmore) but had been frozen out and was using this site. It flew off north. A Coot and two Moorhen were notable on the res, with the latter species even seen well in flight to a smaller pond nearby.

I checked Loseley afterwards, where Abel had reported an increase in Lapwing yesterday. In the main field, I counted no fewer than 197 – a huge flock for this area – with a further five by the flash further up the road. It seems this is the biggest Lapwing count in south-west Surrey since 2014. Shackleford too held large numbers of ‘peewits’, with 121 surprisingly hard to see in the alfalfa. Two Ring-necked Parakeets also flew over here and a Kestrel hovered in the distance.

Yet again, a cold morning, though this time due to the bitter easterly wind chill as oppose to the temperature, which was above 0 for the first time in a few days. Snowdenham Mill Pond was 70% frozen but still held seven Gadwall and a Tufted Duck pair. Unstead SF was very quiet, though a Chiffchaff called, a Grey Wagtail and four Herring Gulls were of note in the Works and a male Sparrowhawk shot down the path clutching onto its Robin prey.

Finally, I thought I'd share this clip of a vocal adult Goshawk, recorded during the first half of February in the local area.