It’s been quite a strange, stop-start week, with a mixed bag of weather to boot. There have been warm, summer-like periods at times, but mainly unseasonal cold and strong winds, and even some snow. The high pressure floodgates meant a load of early migrants have made it over and this has perhaps been the strongest theme of the past seven days, as I’ve broken several earliest ever British records for some species.

It felt rather promising at Tuesley first thing, with a breezy north-easterly and hazy conditions. Seven Egyptian Geese flying high south initially caused excitement, while a first-winter Common Gull was of note as it headed north-east – it seems this is my first April record locally. The Green Sandpiper was in the far corner, two Sand Martins went through and a Kestrel was about, but nothing rarer.

I stuck my head in at Cutt Mill Ponds afterwards. A Shoveler pair were my first at this site since September 2016. Joining them on the house pond were two drake Gadwall and four Mandarin. A Blackcap was in song and a Kingfisher flew over the Tarn. I staked out Frensham Great Pond next, where I felt convinced the now strong wind and full cloud cover would drop in something like a Sandwich Tern.

What I wasn’t expecting was my earliest ever House Martin, picked out of a swirling mass of hirundines more befitting of a late April shower, which included 70 or more Sand Martins and about 20 Swallows. Keeping with the latest / earliest record theme of the morning, a female Goosander circled the west end then departed west – easily my latest ever in the county. A Raven went over, five Crossbills bombed east and a handful of Blackcaps were in song, along with a Firecrest.

With the day off I headed out later on, doing a big walk around Thursley. By now it was mild and the hazy sunshine and strong wind felt good for raptors, and plenty of the common species were up. It was fairly steady, as it often is in the middle of the day here, and I didn’t manage my wished for Redstart or Tree Pipit. The male Curlew was on West Bog, a couple of Willow Warblers were in song and a few Lesser Redpolls and Crossbills were still knocking about.

At about 12:14 I clocked an Osprey over the north end of Ockley, slowly making its way north-east over Birchy Pond and then Elstead Common. Unfortunately it was rather distant but good views were obtained in the bright conditions as it shared the skies for a while with a couple of local Buzzards. Always a pleasure to see in Surrey …

A Sparrowhawk flew over the garden mid-morning.

I headed to Pagham Harbour for the morning, where a stiff north-easterly kept comfort and bird activity levels relatively low. That said, some 72 species were managed, including my earliest ever Sedge Warblers – at least four in song in the reeds in Ferry Channel. Two Spotted Redshanks were also here, in different stages of moult, and good views were obtained of one as it constantly picked food from the mud before washing it off ahead of consumption. 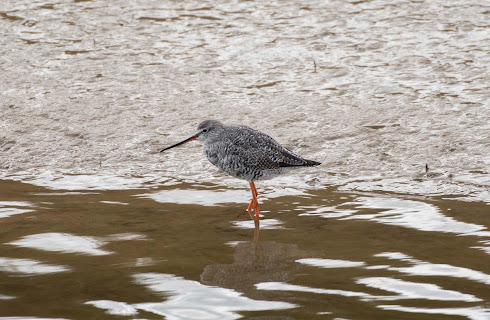 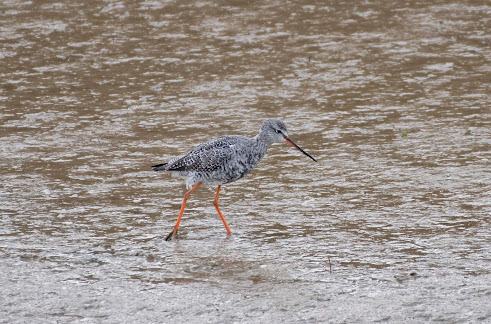 Other wader action was fairly predictable – a Whimbrel was at Church Norton (where at least 30 Sandwich Terns were back in the colony) and two Little Ringed Plovers were on Ferry Pool, with Turnstone, Avocet, Black-tailed Godwit and Grey Plover noted in reasonable numbers. A female Pintail in the harbour seemed a little on the late side. 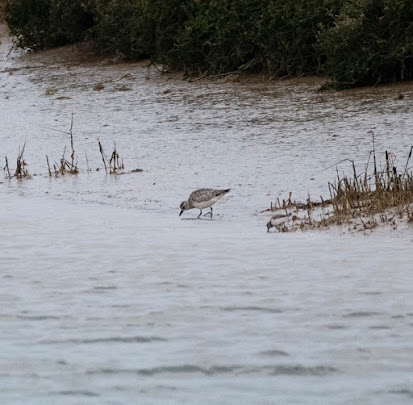 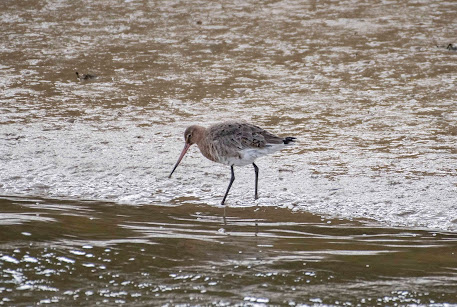 Given the wind, passerine action was at a premium, though a Willow Warbler sang briefly near Ferry Hide. A few Blackcaps and Chiffchaffs were in voice, as was a male Yellowhammer, a Stonechat was in Ferry Field and a male Sparrowhawk was patrolling the area.

A diversion via Henfield Levels was made on the way home. This site, new to me, was picturesque, with rolling farmland and thick hedgerows leading up to the River Adur. Said countryside didn’t hold much, aside a couple of Yellowhammers, a busy rookery and a Kestrel, but the prize was on a large pool by the river – two pairs of Garganey. This is one of my favourite species and I make an effort to see them each year, especially spring drakes, which are stunning birds. A Teal pair and a Snipe were also on the pool and a Lapwing alarm called overhead.

An early evening circuit of Shackleford in the breeze was quiet. Indeed, the highlight was the hatching of the Coot chicks on Lydling Farm pond, with at least three of the tiny fluffballs bobbing around on the water with their attentive parents.

A truly vintage morning at Thursley Common and one that’ll live long in the memory. Some 12.5 km walked and five and a bit hours spent on the site produced a new personal best species haul – 62, which I later learned was only four off the all-time Thursley big day record! It started rather inauspiciously, too, with a light frost and north-west wind making it feel rather wintry as I headed out to Pudmore first thing.

There, a Mandarin was a surprise and a Little Grebe was of note, but I was in for a real shock as I headed onto Ockley when a Cuckoo began to sing towards Hobby Hangar – the last thing I expected given the early date and conditions. I thought I’d pay homage to the Little Buntings given their likely departure this month. The male was in good voice and I finally got some nice recordings of him singing. In one of the below clips you can actually hear the male Curlew in the background and to have both these species in voice made for quite an evocative experience. 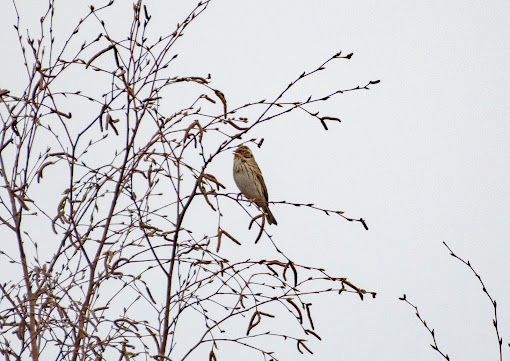 As well as the Curlew, a Lapwing was also displaying over Pudmore, something I’ve never seen here before. Like the Black-headed Gulls I mentioned in my last post, perhaps this species will be tempted to nest, given the lack of disturbance due to the boardwalks being down … there were still plenty of Crossbills and Lesser Redpolls about, including a flock of the latter numbering some 75 near Birchy Pond. I had a really good Mealy-type candidate – big, pale, a lack of warm buff tones and a bright white supercilium and wing bar. Sadly though it was typically restless and I didn’t get any photos (this is a bird I’m not happy claiming unless good images are obtained).

By the time I was at Forked Pond the sun was out and it was warming up considerably. Two Great Crested Grebes and three Coot were on the water. Birdsong was on the up now and three Willow Warblers were logged between Ockley Common and Parish Field. I was looking for Redstarts at the latter site when, to my surprise, ‘Colin’ – the famous Thursley Cuckoo – was perched on one of the logs laid out for him. Presumably it was him I heard earlier … this notoriously tame bird has been at Thursley since at least 2015 and he must have been fresh in, resting for long periods in the sun and feasting on mealworms. I figured I’d make the most of some one-on-one time with him before the crowds flock to the site during the next few weeks. 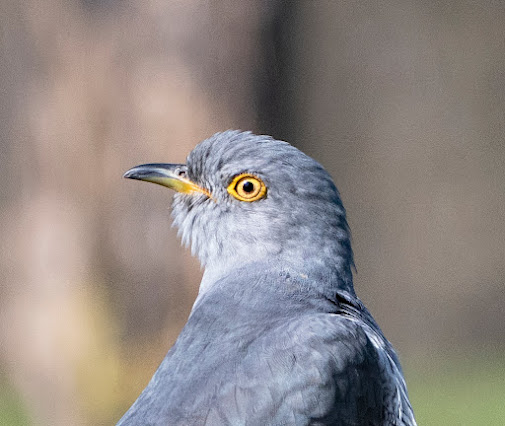 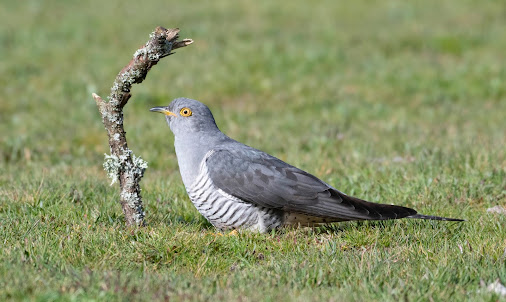 Two Redstarts and a Tree Pipit were also at Parish Field – all singing males. Both were my earliest ever in Surrey and with the sun now beaming down it was rather glorious. I spent the rest of the session logging Dartford Warbler territories around High Ground. Pleasingly a few more were counted than during recent visits, so perhaps they haven’t taken such a bad hit this winter. Three high-flying Swallows heading north concluded an excellent morning.

I saw my parents in the afternoon, down in Sussex. On the way home a very quick check of a farm reservoir a couple of miles from their house produced a cracking female Long-tailed Duck, moulting into summer plumage, in with a small group of Tufted Duck. I later learned it had been in the area for a few weeks. Two Great Crested Grebes, a few Yellowhammers and my first Common Sandpiper of the year were also noted.

A really cold and windy day, with the strong north-westerly making it rather uncomfortable. I staked out Tuesley for a while from first light and it felt good at times – a light northward passage of hirundines (16 Swallows, seven Sand Martins and a House Martin) hinted at movement but nothing major went through.

That said, my earliest ever Surrey Common Sandpiper was quite a surprise and it was joined by the wintering Green Sandpiper for a short while. Two each of Kestrel, Sparrowhawk and Reed Bunting were also noted, along with a Blackcap and an adult Lesser Black-backed Gull.

I did Shackleford afterwards and it was extremely quiet in the cold wind. A female Wheatear made the visit worthwhile, though, and it was nearly eclipsed by my second record of Mute Swan here, but sadly the bird in question proved to be a plastic decoy! Other bits included two Red-legged Partridges and the Coot family.

Later on, I had an encounter with a drake Ruddy Duck – one of the last remaining British birds, with the largely exterminated population probably numbering fewer than 10 individuals now. My last record was in 2016 and I know that those particular birds were later killed by DEFRA. I don’t really have a strong opinion on the Ruddy Duck situation, but it felt rather poignant to think this would probably be the last I see in Britain, having seen them fairly regularly when I was a child. 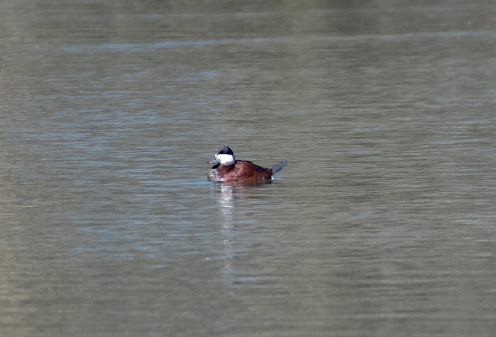 A Grey Wagtail was heard from the kitchen window during a brief but heavy snow shower in the afternoon.

It was really quite cold at Tuesley, despite the clear skies, and a hard frost had settled on the ground. Both the Common and Green Sandpipers were still in situ, while two Swallows looked thoroughly unimpressed in the chilly weather as they sat on a post in the scrapyard.

As I watched two adult Lesser Black-backed Gulls resting on the pontoons I clocked my first Tuesley Mediterranean Gull circling overhead, a second-year bird. I'm not sure if it came off the water or just dropped down, but it didn't hang around long, heading off south-west. Something about the head / bill felt a tiny bit hybrid-esque, but all the other features (especially the plumage and structure) were fine. Perhaps it was a runt, or maybe I'm overthinking it ... 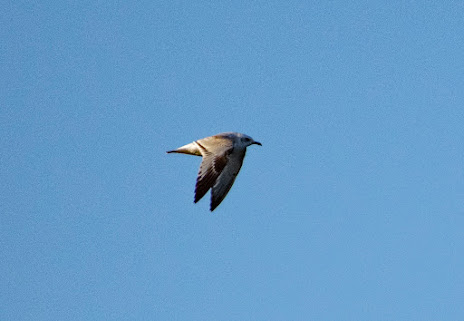 While on the A3, two Red-legged Partridges were spotted at Peper Harrow Park – another pair were at Shackleford, too. It was fairly quiet here but a smart Wheatear pair emerged after a while, flitting about on the model airfield. It was still very cold and I'm sure they were questioning their decision to leave warmer climes further south. 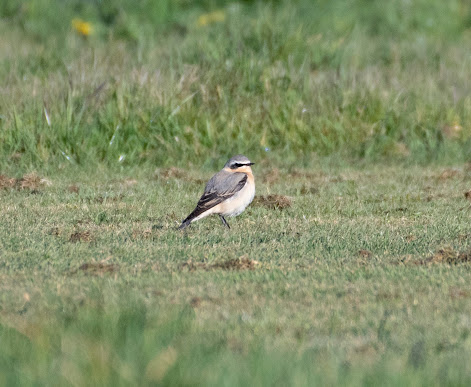 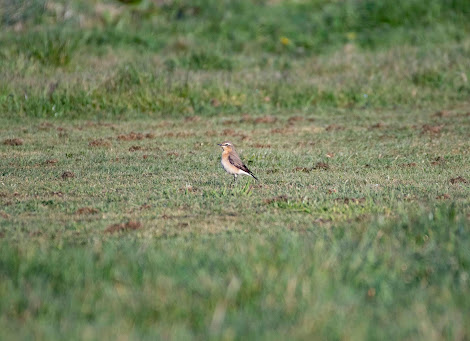 The Coot family were still on the farm pond and were joined by my first Mallard brood of the year, with five tiny ducklings following their mum around. They too could be forgiven for wondering what season they were currently experienced.