Swallows in a snowstorm

It’s been another mixed week, albeit largely cold, wintry and uninspiring. This has resulted in some bizarre and unsettling sights, including hirundines flying around amid falling snow and Common Sandpipers tiptoeing over hard frosts. It’s been a very dry April and the long-term forecast suggests more of the same, which for various reasons is not good. Indeed, many birding colleagues have commented on how this has been the lowest quality start to April for many a year – it’s hard not to agree.

The morning was much milder than of late and it started well – my first Little Egret at Tuesley Farm. Inevitably it was a flyover, heading high south-east before banking and departing west. Even some of the friendly farm workers I’ve spoken to down the years have had Little Egret here so this was long overdue! Otherwise it was the same as recent days, with the Common and Green Sandpipers still present.

I headed to Shackleford next in what’s become a familiar site double-act on a workday, and I managed a very good showing of 42 species in just over an hour. In one of those bizarre quirks that birding throws up, I also scored Little Egret here – another flyover (perhaps the same?) heading high east. This too was a site first for me and most unexpected. Other notable flyovers included late Fieldfare (one) and Redwings (two), the first House Martins back over the village and three Ring-necked Parakeets.

On the deck, the male and female Wheatears were still in situ and a Robin pair were taking food into a thicket where presumably young were hidden away. Kestrel and three Red-legged Partridges were also noted, along with a singing Meadow Pipit – a sound very rarely heard in south-west Surrey these days. 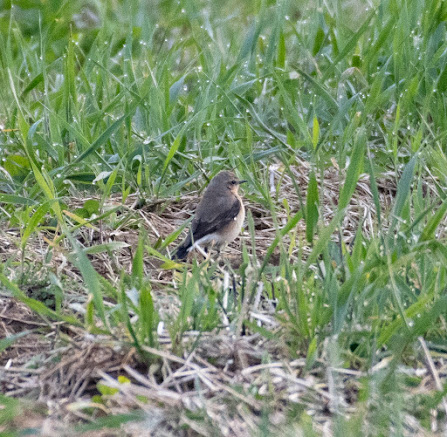 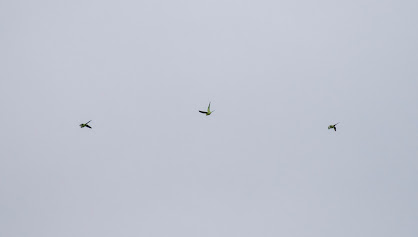 Later in the day the temptation to see the Northern Mockingbird (and various gathered birding friends) in West Sussex was too much, and I popped down to Pulborough mid-afternoon to see this cracker. A crazy story worth reading here. Willow Warbler and Reed Bunting were singing at this site too.

A really great session at Shackleford and the first time it felt properly ‘birdy’ this spring. The first calm night in a while, coupled with south-westerlies and an increase in temperatures, clearly did the job and one of the first birds detected was my maiden Whitethroat of the year – a male back on territory and singing away in the sunshine. 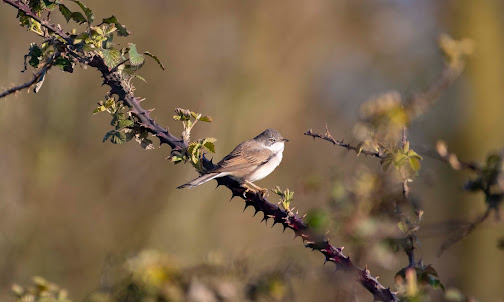 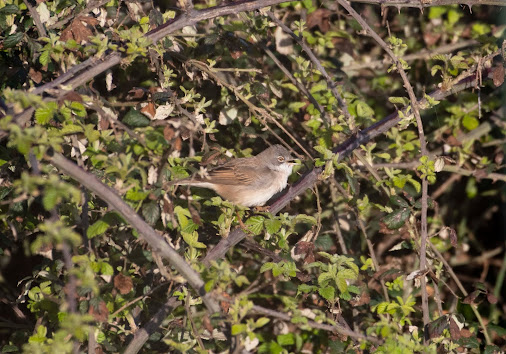 There had been a fall of Wheatears, too – no fewer than seven were present, including six males. I will never tired of seeing (or photographing) this species. A Willow Warbler was also new in and on the move – it is an uncommon migrant here – and it sang occasionally while foraging along a hedgerow. 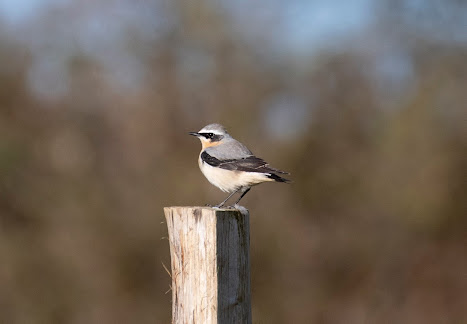 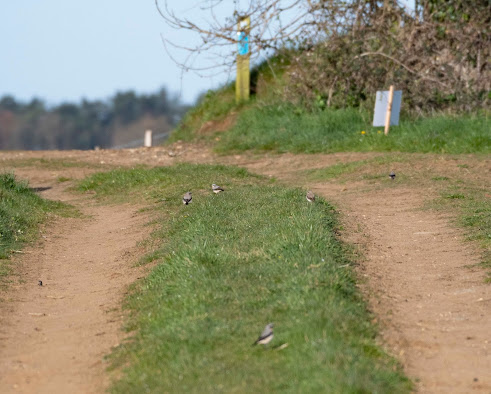 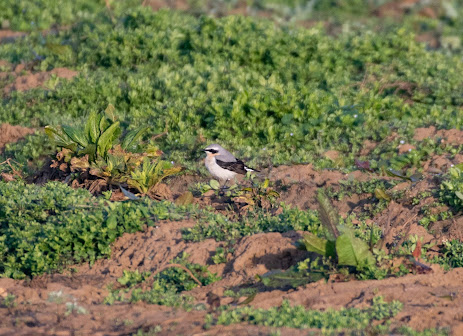 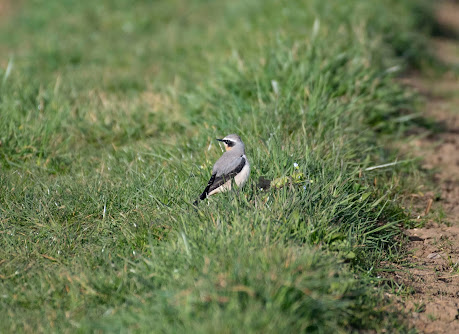 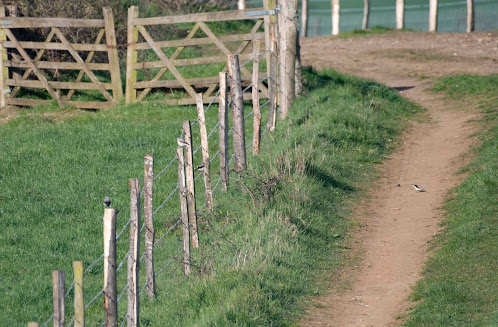 Red-legged Partridge, Lesser Black-backed Gull, Treecreeper and Cormorant were also of note. At home later on, a female Blackbird busily constructed her nest in the garden hedge, as espied from the kitchen window.

A Peregrine flew over Portsmouth Road in Milford mid-morning.

Not too cold this morning but the northerly wind provided something of a wintry feel. I visited a couple of Acrocephalus sites first thing and came up trumps at Unstead SF, where my first Reed Warbler of the year was signing half-heartedly in the Dry Lagoon reedbed. A Whitethroat was also in voice nearby and a Gadwall pair were on the Lagoon but it was generally quiet. It was even more stagnant at Weyburn Meadows afterwards, where singles of Grey Wagtail, Siskin and Mandarin were best.

With the weather far from inspiring I decided to go for a long walk at Thursley. Here, some 44 species were logged in an hour and a half, including three site year ticks for me – a Little Egret over Pudmore, a singing Firecrest near Truxford and three Wheatears – a male and two females – on the burned ground in front of the tumuli.

I spent a little while watching the two male Curlews on Ockley Common, as they engaged in territorial display flights and some rather odd lekking-like behaviour on East Bog. Hopefully one of them gets paired up soon. Other bits included eight singing Willow Warblers, two male Redstarts, four Crossbills, a singing Siskin and a Skylark pair building a nest. 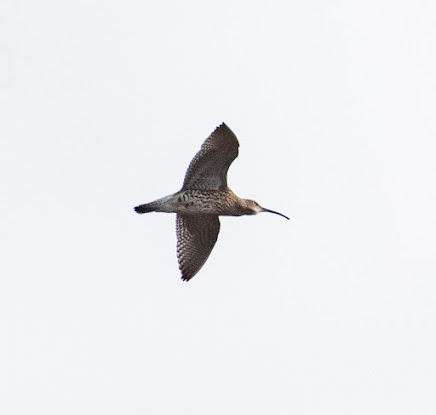 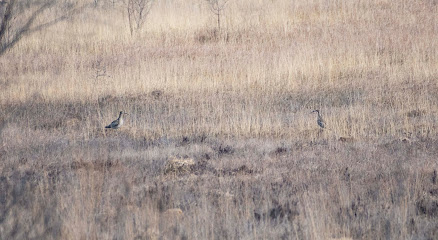 I headed to Frensham Great Pond amid a moderate snow shower and very cold conditions – it was both strange and unsettling to see a tight flock of hirundines flying desperately close to the water in search of insect prey as the white stuff fell from the sky. A late drake Pochard was more befitting of the conditions and a Firecrest sang, but it was otherwise quiet.

I have always struggled to find spring Ring Ouzel locally, only having done so once before and set out this morning to improve that record, starting at Shackleford. There was a most unseasonal, hard frost, and the clear blue skies made it feel like a fine midwinter day. It was very quiet here, probably in part due to the cold weather, but a second Whitethroat was in and both sang later on in the session when it had warmed up. Other bits included male Sparrowhawk, Ring-necked Parakeet and four Red-legged Partridges.

I decided to try the downs behind Loseley afterwards. It looks good for Ring Ouzel here but again it was rather quiet in the wintry conditions. This site also had two Whitethroats, as well as a single Skylark, a Linnet pair, two singing Firecrests, a heard-only Raven and a male Sparrowhawk.

One of the many joys of spring is extended daylight and this allowed me to finally get my local Ring Ouzel, although not self-found, as I twitched Jeremy’s cracking male at his Crooksbury Common patch after work. It was rather distant as it hopped around on the short paddock turf but was a fine way to end the day. A male Redstart and a foraging Woodlark were also noted. 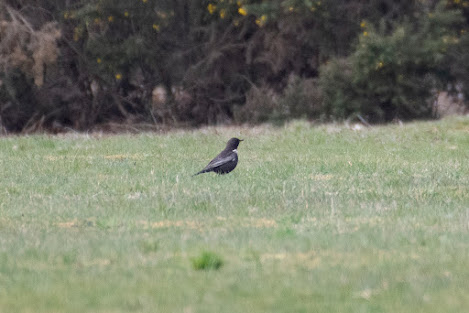 I walked part of the river at lunchtime, by which point is was fairly mild and bright. Two Cetti's Warblers sticking close together in suitable habitat were very noteworthy – hopefully a breeding attempt is on the cards. At Unstead Water Meadows, a Swallow was back over the Bunkers Hill Farm stables, a male Kestrel was at the north end and a Linnet pair seemed to be checking out possible nest sites.