It’s high summer in south-west Surrey. This naturally means bird action drops off a bit but keeping tabs on breeders – especially nests – is at a peak, with the season-long study of some rarer species coming to a conclusion. The weather has been largely nice as well – I think the delayed spring has meant June has felt a little more like May than it normally would. And with other interests coming to the fore it’s been a relaxed and enjoyable couple of weeks.

It was a sunny and warm again as I headed to a Lesser Spotted Woodpecker nest I’d located not long ago in a dead silver birch. There, an excavation containing three young was busily being attended too by the adult pair. It’s been a mixed season of 'pecker study in truth, with three of the five nests found failing. Still, this was a nice end to the fieldwork (with a happy postscript that all three youngsters successfully fledged). A bit more information here. 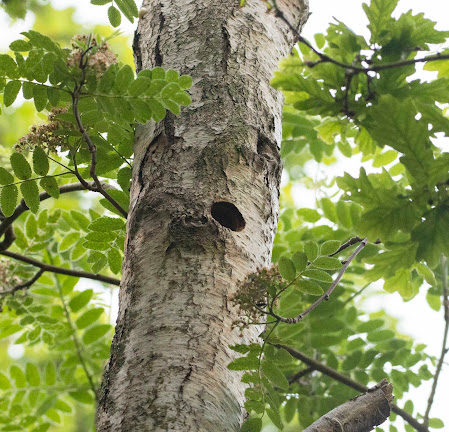 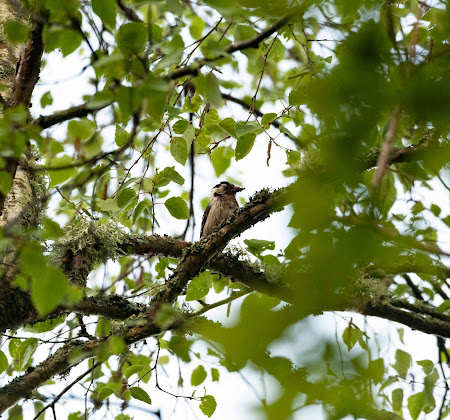 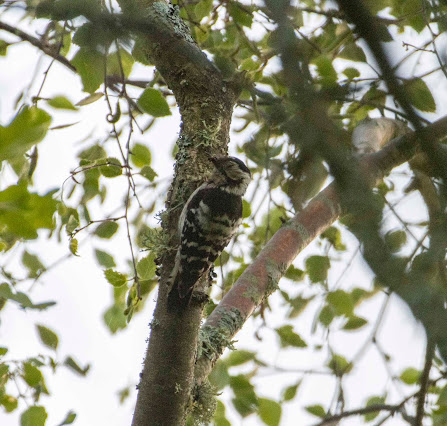 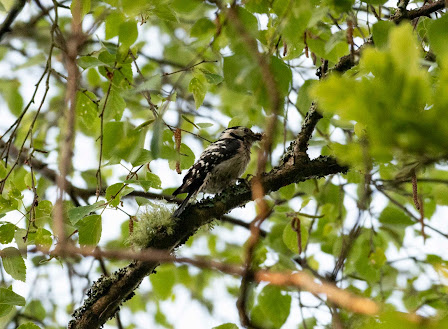 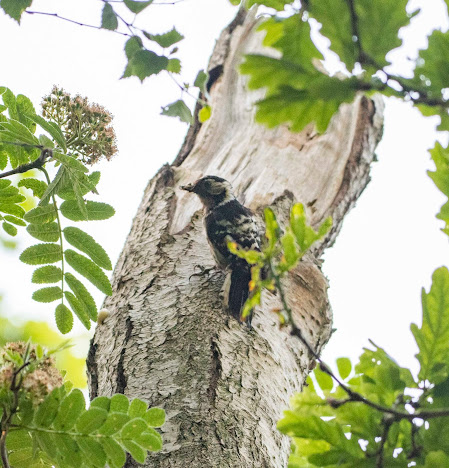 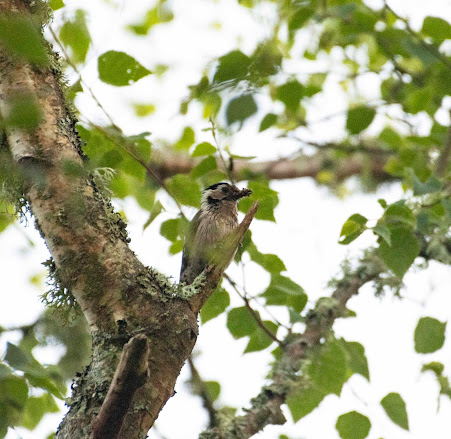 I then headed to Thursley Common where I enjoyed a glorious stroll in the sunshine, with life seemingly everywhere. This included plenty of recent fledglings, such as Chiffchaffs, Dartford Warblers, Great Tits, Nuthatches and Woodlarks. Best of all, though, was a young Curlew chick, which was being chaperoned by the adults on Ockley Common, with the male periodically chasing off Carrion Crows. 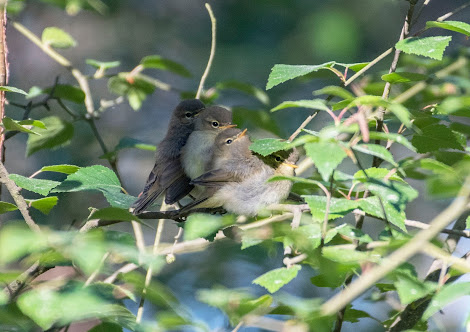 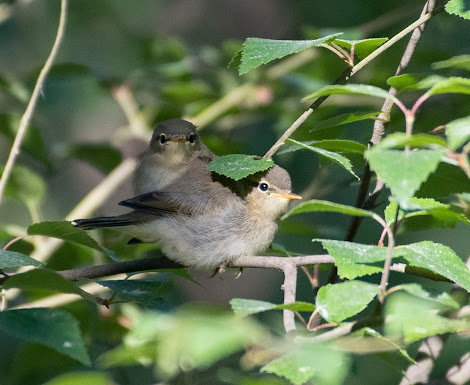 Snipe and Water Rail were heard-only, Crossbill and Siskin flew over (as did a feral Barnacle Goose!) and a Hobby was perched on a small pine near French Ditch. At North Wood, a singing male Spotted Flycatcher was serenading a nearby female in an area of open mixed woodland. I’ve not had this species at this part of the common before. Nearby, a particularly loud Willow Warbler was in voice.

Other bits included food-carrying Skylark and Whitethroat, a ‘new’ Tree Pipit territory near Cricklestones and a Bullfinch at North Wood. Lovely stuff, with 54 species notched up by the end of the walk. 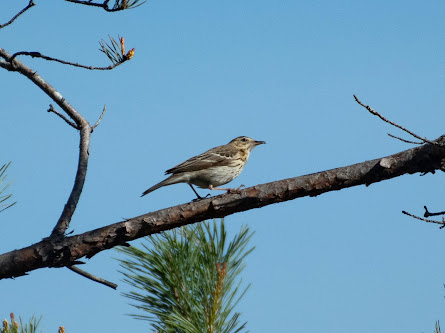 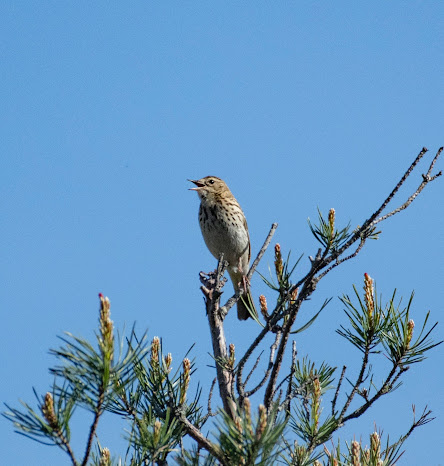 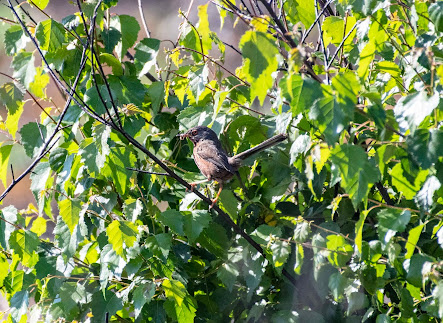 A Sparrowhawk flew over Farncombe mid-afternoon.

I met up with Dave at Thursley a little before 9 pm to look for Nightjars. It was surprisingly breezy and grey which hampered sound recording, but didn’t deter the birds, which began vocalising at 9.35 pm. In total, we had at least six churring and wing-clapping males and a calling female, as well as nice flight views near Will Reeds.

A Snipe drummed and sang briefly on South Bog and a male Woodcock was roding over Parish Field and Will Reeds, too. A nice, atmospheric evening, that also included a Hobby hawking over Pudmore at dusk and a Stonechat in song an hour after sunset.

I walked Shackleford farmland before work and notched up 30 species, two of which were notable for the time of year: Lesser Black-backed Gull and Ring-necked Parakeet. The former I’m seeing far more than usual this summer. I’m not sure why this is. As for the parakeets, this is surely a sign of the impending (and overdue) green invasion of south-west Surrey … Other bits included four Red-legged Partridges, Whitethroats and Skylarks carrying food and my first juvenile Woodpigeon of the year.

Late at night, a Moorhen was calling as it flew over Farncombe.

A few House Martins were flying over Godalming town centre early afternoon. Up to 12 Swifts were hawking over the garden in the evening.

It was warm early on at Thursley, with bird activity a little subdued, especially a couple of hours into the morning. The Curlew pair were acting rather agitated around Pudmore, though I couldn’t see their chick. Presumably it was hiding safely out of sight. A Snipe sang from the east end, three different female Mallards escorted ducklings around and three Crossbills flew over South Bog. 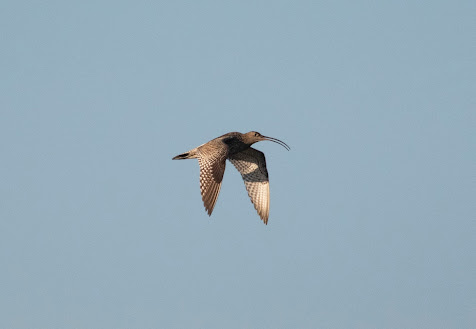 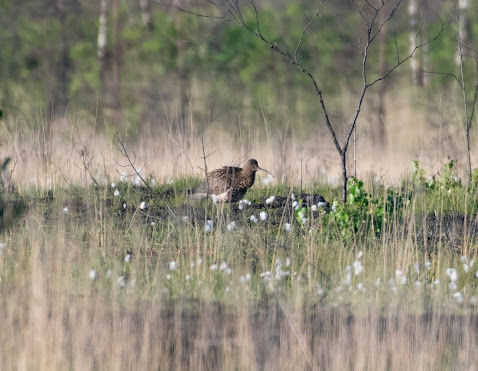 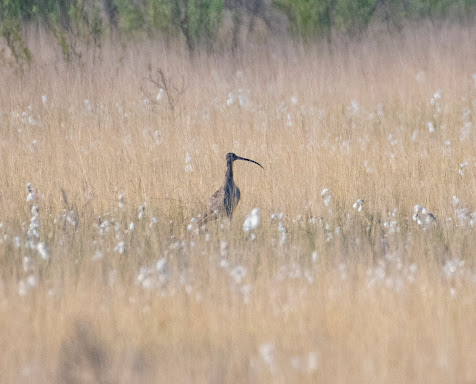 The Shrike Hill male Redstart was back in full voice, so it was no surprise to see two recently fledged youngsters a little further up the path – presumably from his first brood. Other new youngsters included three Rooks and two Great Spotted Woodpeckers (with their parents). A female Linnet was carrying nest material on Ockley Common, where a small party of Swifts hawked overhead, a Grey Wagtail flew over, a Cuckoo sang and a Nightjar briefly churred a little after 7.30 am. 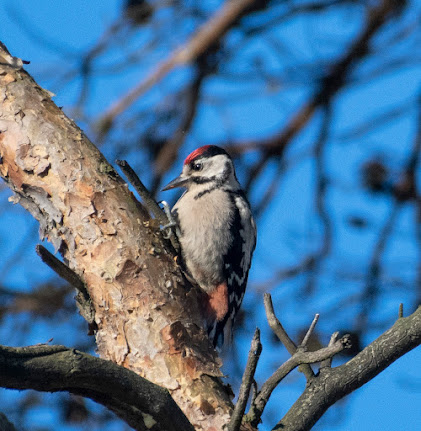 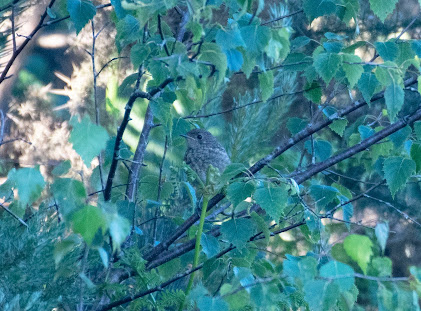 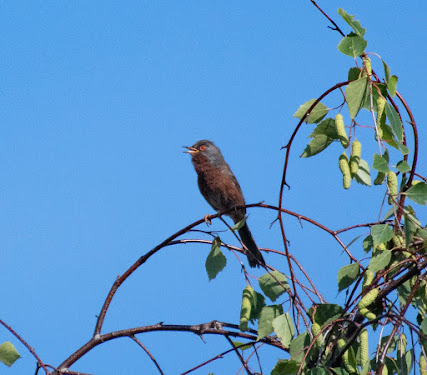 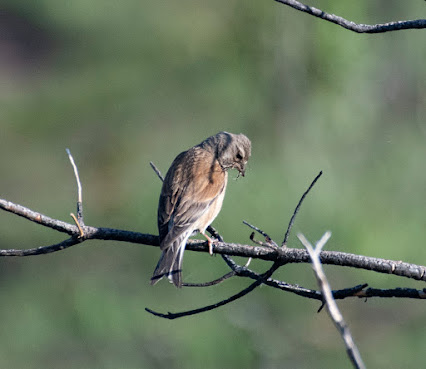 In the morning, from the kitchen window, a Firecrest was heard singing a few gardens down – only the second time I’ve recorded this species from home.

It was warm and bright with a little haze when I visited Winkworth Arboreutm for the first time in a few months early morning. It was rather quiet, with 32 species a little below average for this time of year. On Rowe’s Flashe, both Little Grebe and Canada Geese had young, and there were three each of drake Mandarin and Tufted Duck. A Marsh Tit called near the boathouse and a male Grey Wagtail was collecting food nearby. 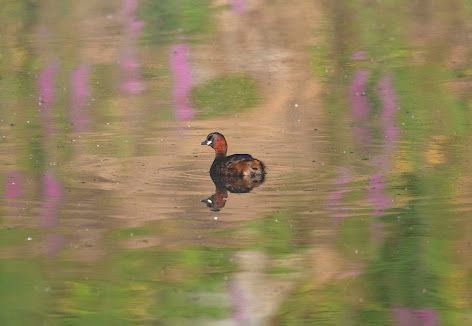 At my next site, I was both surprised and delighted to stumble upon an adult Hawfinch feeding a recently fledged chick. A series of curious calls had alerted me to the birds, which were high in a cherry tree, with the adult on constant feeding duty. I watched from a careful distance for some time, with the birds oblivious to my presence, before heading off.

What an amazing encounter – this nationally rare breeder is notoriously hard to study in the breeding season, so to get up close and personal with a juvenile and adult was quite incredible. There is no doubt this species is a very low-level – but annual – breeder in the poorly-visited woodlands of south-west Surrey. So, it was great to actually confirm this … 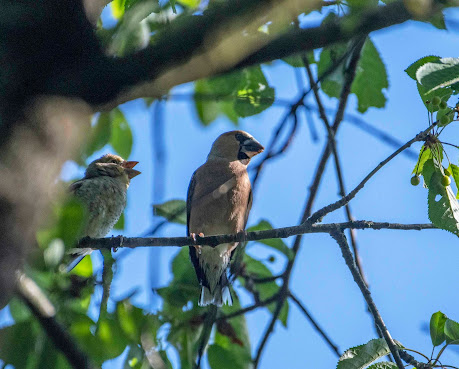 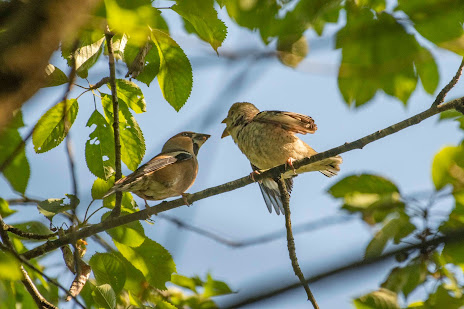 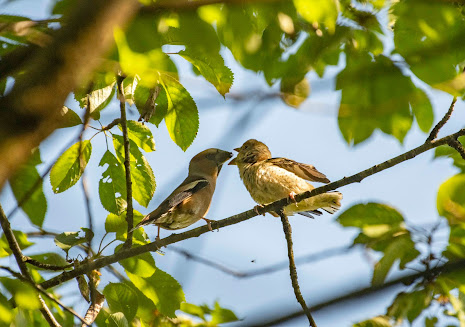 On the way home, a quick stop at Snowdenham Mill Pond produced the Mute Swan family party still with all six cygnets, a Grey Wagtail and a five Mandarin.

I visited Tuesley for the first time in a while in the morning. The weather had broken down overnight and it was hazy and drizzly, but still mild. One of the rafts had sadly become detached so all the Black-headed Gulls were crammed onto one, though they seem to be having a best-ever year – one well-developed youngster was about, as well as four chicks not long off the raft, plus at least four still by their nests and a sitting adult. Family groups of both Grey and Pied Wagtails were pottering around the shore.

No observations of note during an unseasonal day of heavy rain.

I met up with Sam late morning for a casual amble around the Low Weald countryside near Loxhill and Hambledon. The weather was a bit miserable for June – a cool north-easterly wind with intermittent light drizzle and gloomy, full cloud cover. Despite that, Cuckoo, Firecrest and a few Yellowhammers were in voice, where a female Siskin and three Lesser Black-backed Gulls flew over – the latter always of note out here in the sticks, especially so in the summer. We also enjoyed a Nightingale pair taking food into a nest of noisy chicks, a mixed Willow Warbler singer and a Little Owl perched in an oak tree at a site Sam had found a couple of months back.

A Ring-necked Parakeet over the garden was a surprise in the morning – only my second record here in five years and just the seventh I’ve ever had in south-west Surrey away from Shackleford.

Another wet and miserable day with nothing to report.