An upturn in the weather has coincided with a late surge of spring migration in Britain, meaning there's been good reason to get out and about during the past week. This has mainly been local, although a couple of trips further afield have added to a dynamic and fun start to June. The weather looks settled for the foreseeable so hopefully an air of normality can resume among breeding birds as well.

It was a lovely, warm early summer morning and, with the wind just hanging in the south-east, it was time for a proper field session. I headed to Thursley where, over four hours and some 11km, I racked up 53 species, which was pretty good for June. The clear highlight came not long after 7 am when a Turtle Dove flew east over Spur Wood and Francis Copse – my first for the site. It seems very likely this bird was a late migrant – high-flying early in the morning – and a light passage of Swallows during the course of the morning backed up the idea that there are still migrants to arrive. No surprise after the wet and cold spring we’ve endured up to this point …

Pudmore was fairly quiet, save the male Curlew patrolling and four Tufted Duck. A Water Rail called towards Birchy Pond. Young Stonechats and Blue Tits were noted, as was a Willow Warbler carrying food at Francis Copse – a Redstart pair were doing the same near Shrike Hill, too. Woodlarks seemed to be at all stages of breeding – plenty of singing males (presumably on second broods), a family party near Circklestones and one bird building a nest! Unseasonal Lesser Black-backed and Herring Gulls cruised over and, by the time I was wrapping things up, a few Common Lizards were basking in the sunshine.

With the wind still in the south-east I opted for Thursley again, undertaking a similar route but this time tallying 55 species. Notable bits that weren’t seen yesterday included a singing Snipe on West Bog – perhaps enough evidence this species is breeding here – and a Crossbill over Ockley Common, as well as Hobby and Little Grebe. A Water Rail was at Pudmore.

The Redstart pair were again busy feeding young. While looking unsuccessfully for their nest I inadvertently located a Dunnock brood, low to the ground and being fed by adults. A Canada Goose pair had four goslings on Pylon Pool – I can’t actually remember this species breeding here successfully before.

In the evening I spent a bit of time with a reeling male Grasshopper Warbler. This bird, present a few weeks now, is seemingly unpaired and is singing frequently and at all hours of the day. A shame, as this breeding site – the only one in the vice-county – has produced young in each of the past two years. Hopefully he finds a mate …

I finished work a little early so decided to have an amble around Thorncombe Street. At Snowdenham Mill Pond, the Mute Swan pair still had all six cygnets and were keeping close to them at the south end. Four each of Mandarin and Tufted Duck were present, along with one Coot with six small chicks and another sitting on a nest.

I then headed down to the south end and enjoyed an immensely peaceful amble up and down the lane along Great Brook and Selhurst Common. I’d love to live in one of the cottages here – there were birds everywhere, many singing or carrying food to hungry youngsters. This site has been super reliable for Spotted Flycatcher ever since I started patching Thorncombe Street in 2014, but last year the main wisteria was cut down and they became tricky. So, it was a nice surprise to locate at least one bird (but probably two) in more or less the same area, singing occasionally and flitting from tree to tree.

A Firecrest was singing, a couple of Siskins flew over and a Marsh Tit was carrying food. A brief bit of Cuckoo song was heard to the north and two Red-legged Partridges were about, while an adult Treecreeper was seen with a recent fledgling. A Grey Wagtail was a little further along the lane towards Goose Green. A fine summer stroll indeed.

Typically it was raining on my day off, so I had a lazy start and decided to head down to Pagham mid-morning. Given the precipitation, I staked out Church Norton from the hide for a few hours, where I saw not a soul. For the most part it was quiet – three Sanderlings, a Whimbrel, four Dunlin, seven Turnstone and a drake Gadwall were noted, as well as the usual Little and Sandwich Terns. A Mediterranean Gull – one of 72 counted – was sitting with a chick on Tern Island and a Lesser Whitethroat sang from a thicket beside the hide. Two Shelduck pairs brought their youngsters up onto the footpath before quickly retreating to the water when they saw me. 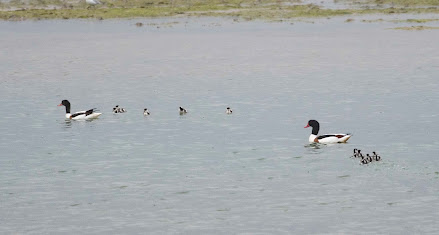 I was about to head off when, to my surprise, I picked up a Roseate Tern, distantly on the exposed mud south-east of Tern Island. As soon as I went for the camera it flew – typical, I thought. Thankfully though I relocated it and it was with a second bird! Very nice and, despite the distance, the pale plumage, all-dark bill and bright red legs could be seen. 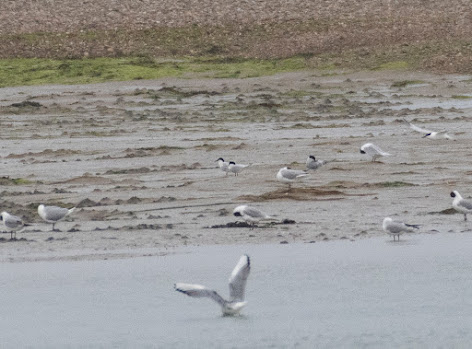 This isn’t a species I see often (only my third record, ever) and once I put the news out a few folks arrived to see them. Reward for patience, I thought, and for persevering in the rain … also my ninth tern species on the Selsey Peninsula!

I headed to the Ferry area next which was quiet, save a few Avocet on Ferry Pool and a single Curlew in Ferry Channel. It was a bit livelier at North Wall, where two smart Cattle Egrets were flying in and out of Owl Copse. I remember when Pagham was the place to go for Little Egret, but nowadays it’s their peachy congeners who steal the show. A Cuckoo sang nearby, Reed Warblers far outnumbered Sedges and a Hobby flew low east over the fields. Some 70 species in all and a decent half-day out.

A quick look at Snowdenham Mill Pond in the morning revealed that the Mute Swan pair still had all six cygnets. A Gadwall pair, the drake in heavy moult, were also about, along with one of the Red-crested Pochard x Mallard hybrids and three Tufted Duck. Later, a Reed Warbler was rather incongruously singing in a bush at Tongham services.

In the afternoon in Felpham, at my parents’, a Painted Lady visited the garden briefly. Two Mediterranean Gulls flew east and a Blackbird pair were tending to a well-developed youngster.

A long but memorable day out. It started early, and two male Tawny Owls were audible from my drive when Matt picked me up not long after 3.45 am. With Abel and Sam in tow, we got to our destination – Ham Wall in Somerset – about an hour after first light. And we were soon enjoying the spectacular sight and sound of the male River Warbler that has been holding fort here since 4th. 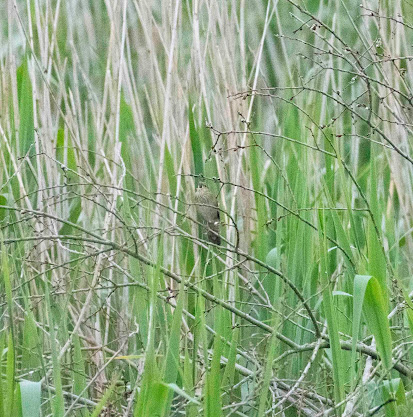 It’s been more than a decade since a twitchable bird was on the mainland and the setting and experience for a lifer was perfect – it was absolutely going for it with it’s bizarre song and sitting out on willow brush at close range. As we watched, several Great Egrets and Marsh Harriers flew over, with other songsters including Bittern, Water Rail and Cetti’s, Reed and Sedge Warblers. We eventually peeled away, checking out other parts of the reserve where two Pochard broods were noted, along with a late drake Wigeon. We’d managed some 51 species by the time we left.

Next up was a site where, after a bit of patience and scanning, we were treated to an incredible encounter with a male Montagu’s Harrier – one of a tiny handful in Britain this summer. This species is on the verge of extinction from our isles, so to see it twisting and turning as it displayed above our heads was a breath-taking moment that left us all in awe, even if it was a little distant. One of my favourite species without a doubt … 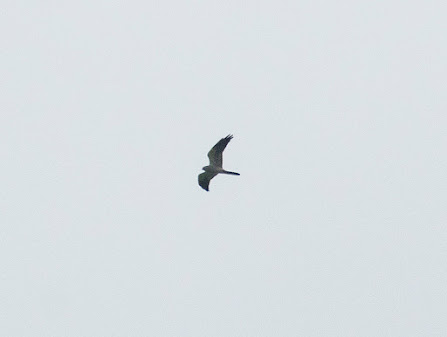 We then headed to an area on Salisbury Plain where the Great Bustard reintroduction project is taking place. Here, we counted seven birds, including a couple of males in full, spectacular display. Around us Yellow Wagtails busily fed youngsters, 25 or more Corn Buntings sang and Lapwings mobbed anything that flew over. We also noted both Grey and Red-legged Partridge, singing Meadow Pipit and Wall Brown.

With news that Britain’s eighth Red-necked Stint was still in Northumberland coming through early in the morning, a plan had already been hatched to take the long journey north. Car observations included Peregrine and some 35 Lapwings near Basingstoke, and a flock of 16 Golden Plovers near Leeming in North Yorkshire. Arrival time at Blyth Estuary was just after 6 pm, having gone through the trauma of news of the bird flying off about 45 minutes beforehand!

Thankfully the Red-necked Stint had returned and, while initially distant, it eventually flew over the river and landed on the south shore, allowing for great – albeit not the closest – ‘scope views of a truly stunning little wader, all the way from East Asia. The brick red face and upperparts glowed in the warm evening light as it fed busily with a flock of Ringed Plovers and Dunlin. My photos were poor so included is a link to a shot my colleague Josh took earlier in the day, when he and several others enjoyed it down to a few metres … 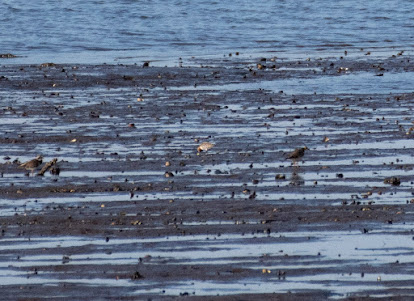 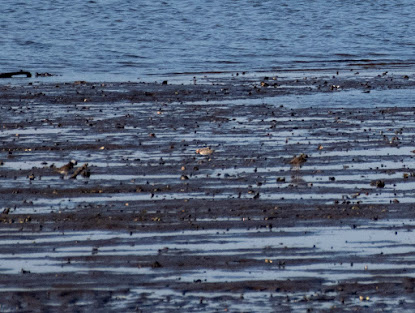 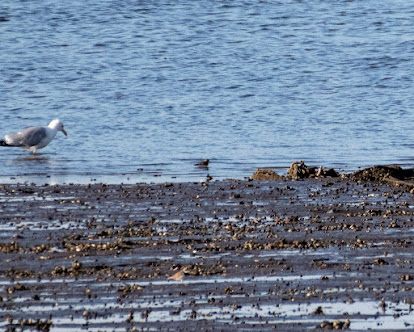 Easily one of the best birds I’ve seen in Britain and a Western Palearctic mega to boot. This is the first Red-necked Stint to grace the UK since 2010, and the first twitchable one since 2001. It’s also the first time a spring adult has turned up ...

It was hard to take your eyes off the Red-necked Stint, but other bits included a Little Stint (which was side-by-side with the Red-necked briefly), a female Eider with four ducklings, a Curlew, a singing Meadow Pipit, 12 redhead Goosander feeding in the river mouth and a Common Tern patrolling the water. A knackering but superb day out …

A Bullfinch was calling in the garden at lunchtime.
Posted by Ed at 09:34