The struggle of looking for waterbirds in south-west Surrey

November's end has been cold as prolonged northerlies – including Storm Arwen – rained down on Surrey. Thus, it's been a period to work waterbodies; late autumn often delivers unusual wildfowl, grebes or divers inland in the South-East. This birding forecast came through, not least via Ferruginous Duck at Thorpe Park, Slavonian Grebe and Long-tailed Duck at Staines and Little Auk in Oxfordshire. But the waterbird forcefield that is south-west Surrey failed to produce, despite my best efforts. That's how it is around here, though – and why local rarity context is a great thing (and why it feels so good when you do find something decent!).

I walked the Lammas Lands first thing, managing a paltry six Snipe. Various factors – not least the dry and mild autumn – seem to have reduced numbers here this winter (I had 18 on 22 November last year). However, this was more than made up for with a first-winter Dartford Warbler on Catteshall Meadow – only the third Lammas Lands record. All have been in the last 11 months, prompting me to wonder if this species in fact winters here with some regularity ... The nearest breeding locales are some 6.5 km away so, whatever the case, they are decent records for the site. 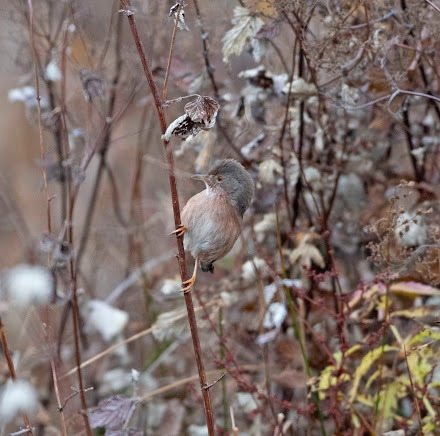 Other bits included two Stonechats, three Fieldfares and four Reed Buntings. Later in the morning I walked Busbridge Lakes for the first time in six years. Wood Lake was very quiet, save two Kingfishers at the west end, though a Brambling in an area of beech trees was good value and a Lesser Redpoll flew over.

A pleasant session at Shackleford was done under blue skies and a fresh northerly breeze, with the most notable of 43 species recorded a late Chiffchaff calling in a strip of set aside. Five Bullfinches, a Brambling and two Lesser Redpolls were also seen.

Three each of Shoveler and Gadwall were notable at a frosty Frensham Great Pond first thing. I've only seen the latter species twice here this year, which is remarkable given I visit the site roughly once a week. Pochard numbers were down, with only eight tallied, while the Firecrest was still near the outlet pond and two Kingfishers were seen.

There was a bit of wildfowl turnover at Frensham Great Pond, with a female Goosander and an increase of Pochard up to 13, but no Shoveler or Gadwall were present. A Water Rail called from the eastern reedbed and two Kingfishers flew over.

I walked to Broadwater and back during my lunch break, with a Wigeon out in the middle of the lake a lovely surprise. This scarcest of south-west Surrey ducks is an unpredictable bird locally, this being only my third record all year. An adult and first-winter Great Crested Grebe were also present.

Heavy mist hanged in the air as I did a sweep of local waterbodies in the morning. First up was Snowdenham Mill Pond, which was surprisingly quiet – seven Teal (including some displaying drakes) were my first of the season here, but the only other wildfowl of note was four Mandarin.

Tuesley was dead, and Enton Lakes produced a single Kingfisher. At Frensham, Pochard were up to 20 but it was otherwise quiet. An underwhelming morning concluded at Broadwater, where a new Great Crested Grebe (or one that evaded me yesterday) bumped the count up to three.

Broadwater at first light produced a flyover Kingfisher and some 148 roosting Canada Geese. I then headed to Frensham Great Pond once more, where Pochard had again increased, this time to 24. An impressive flock of at least 130 Siskins were in alders between the hotel and sailing club, three Firecrests were near the outlet stream and a Kingfisher was at the south end.

Later in the morning I walked Unstead Water Meadows, which are very dry for this time of year. As a result there wasn't much about, though three Water Rails were back in their usual Alder carr winter haunt near Bunkers Hill Farm – my first along the Wey since 14 March. A third Kingfisher of the day was also noted heading downriver.

Dave and I undertook a dusk stakeout at Thursley, which was cold and quiet with only 20 species seen. This did include some relative quality, though, such as a Little Egret heading south-west (presumably to roost at Frensham), two Snipe and Woodcock that came out from Will Reeds to feed on South Bog when it was dark.

The pack had shuffled a little at Frensham Great Pond, where seven Shoveler were dotted about, as well as another increase of Pochard up to 26. Kingfisher and Firecrest put in their obligatory appearances too. 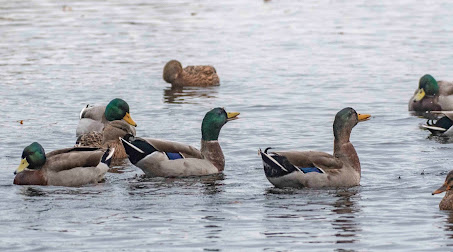 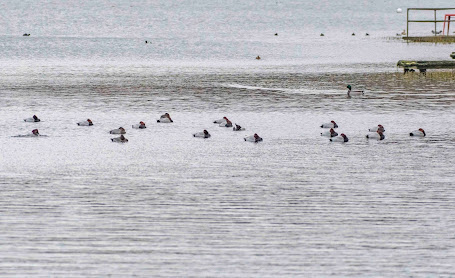 Shoveler had perhaps been on the move overnight, with 12 on the house pond at Cutt Mill afterwards. Some 21 Mandarin were also seen, as well as two Kingfishers, though no Goosander were around. My final destination of Tuesley was quiet, though more than 100 gulls included some 70 Common and two Lesser Black-backed.

Today a decent waterbird finally made it to south-west Surrey, at Frensham, typically enough on the first day in six I didn't visit the site; a Goldeneye found by Shaun. My personal efforts weren't much to shout about, in freezing and windy conditions as Storm Arwen struck. Snowdenham Mill Pond had four each of Gadwall and Mandarin, as well as my first Kestrel here for more than two and a half years.

The highlight of the morning came inadvertently while driving through Shackleford – a Little Grebe on the small farm pond by the road. This was the first I've seen on this tiny waterbody; a micro-mega and the type of thing to put a smile on the face of any local patchwatcher. I can't recall seeing one that's retained so much summer plumage at this time of year, either – a nice reminder of warmer times as horizontal sleet fell!

Another bitterly cold morning, this time with a moderate covering of snow on the ground. Four Mute Swans at Tuesley were presumably displaced from an ice-bound locale overnight, while Frensham Great Pond produced no fewer than 32 Shoveler – my highest-ever local count of this species, which was something to take away from this spell of weather if nothing else. The partially resident drake Pochard x Tufted Duck hybrid was at the north end (my first sighting in over a year) and some 17 Pochard were off the hotel. A female Kestrel flew over the A3 near Milford on the way home.

I gave Frensham yet another go this morning, which was much milder than of late. There had been a clear out of ducks: zero Shoveler and Tufted Duck numbers notably down. Two Little Grebes were of note, as was a flyover Crossbill – this species has really dropped off since early summer, and this record was my first locally since 15 October and fourth since mid-June. A Firecrest was again by the outlet stream.

For something a bit different afterwards, I checked Tongham GP and Quay Lake (one of the Frimley pits). The former site had decent numbers of Wigeon and Gadwall, along with nearly 100 Coot. It's not easy to view, but must get good birds. I don't know anyone who properly watches it. Adjacent Aldershot Park, just over the Hampshire border, held a surprise Ring-necked Parakeet and a flyover Raven. Quay Lake was much quieter with nothing of note seen, despite being about twice the size.