Any hopes that autumn would deliver a late show have gradually diminished during the last 10 days, with things remaining steady in south-west Surrey. Like many birders, my thoughts are slowly turning to 2022 as the days grow shorter and darker, although I hope there will be some good winter birding to be had before then.

Unforecast drizzle and murk meant ringing at Shackleford was a short-lived affair. Unsurprisingly it was quiet, with the highlights in an hour-and-a-half two Bramblings over, a few groups of winter thrushes on the deck and a Sparrowhawk that dashed along a hedgerow.

Heavy mist had cleared to bright skies by mid-morning, when I did a quick check of Cutt Mill Ponds. A relatively early Goosander – a drake – was on the house pond, where nine Shoveler and pairs of Mandarin and Tufted Duck were also present.

Mid-afternoon I headed up to Longside Lake, near Thorpe, to check an interesting first-winter female Aythya that had been reported as a possible Lesser Scaup. The apparent bird in question was curious-looking, but no more than a small, pale Tufted Duck, with structure and plumage factors (not least the wingbar) confirming this.

At dusk I met with Sam for a catch up at Shackleford. It took a while for things to get going but, when it was properly dark about half an hour after sunset, there was much to see, especially with the help of the thermal imager. A flock of Lapwings – at least 22 – came in to feed, along with a minimum of five Woodcock. Three Little Owls were calling nearby and a male Tawny Owl was hooting, while other bits included two Red-legged Partridges, a Ring-necked Parakeet and a Kestrel.

It was dull and mild at Tuesley first thing, where two Mute Swans were a surprise – my first on the deck here in more than 18 months. The two Green Sandpipers were about, though typically skittish, and 18 Little Grebes were counted. 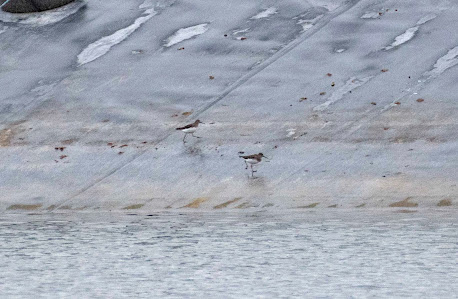 I then undertook a long walk through the Weald countryside around Hambledon and Loxhill. Court Farm held four Yellowhammers, three Skylarks and a male Stonechat, while a Little Owl and a Bullfinch were at Little Burgate Farm. A triple-figure flock of finches some six species strong was pleasing to see around the cover crops at Burgate Farm. This included at least two Bramblings, 120 or more Linnets and some 70 Chaffinches. A Marsh Tit along Vann Lane rounded off proceedings.

Later on, following Martin K's excellent Caspian Gull find in Guildford this morning, I thought I'd try Tuesley again with the remote possibility the bird had found its way to the flock that loafs there on winter afternoons. Not long after I arrived most gulls took flight, which is pretty typical. Some then started alarm calling – this was rather more unusual but foolishly I didn't properly tune in to it.

A minute or so passed and the gulls settled a bit, with about 10 still in the air swirling around over the water. At this point I spotted a higher bird to the south of the reservoir. I initially thought 'that gull gained height quickly', but upon getting my bins on the bird it became clear it was a large raptor. It then didn't take long to establish that it was a harrier. The build had me confident it wasn't a Marsh Harrier, and this was confirmed during the three or four times it banked, at which point it revealed a clear white rump: Hen Harrier!

The wings were clearly broad – broader and heavier than Pallid (as unlikely as that'd be), which was a useful feature to note given I couldn't count the primary fingers due to the distance. Annoyingly, I was caught off guard by this bird and it was always flying away from me (it would have flown over my head more or less) – I scrambled to get my camera out of my bag after identifying it but, despite seeing it in the viewfinder, I couldn't nail any image in the minute. I lost it in some low cloud in the direction of Milford train station about three minutes after picking it up.

A cool record and I think a first for Tuesley. It's also a south-west Surrey year tick (there's only been two locally in 2021, both passage males at Thursley) and the first I've found on patch since the lovely Shackleford bird in 2019. Tuesley has served me well this year, this being the third county rarity at the site in the last three months. Interestingly, what may well have been the same Hen Harrier was at Pulborough Brooks later on – more on that here.

It was quiet at Frensham Great Pond first thing, with 17 Pochard and a Kingfisher noted off the hotel. A Firecrest was calling in nearby holly.
Tuesday 16th
No birding today.
Wednesday 17th
Early mist quickly burned off to unveil a sunny winter's day at Shackleford where, despite ringing once again being slow, there was plenty to see among 46 species of birds. More than 200 Canada and Greylag Geese flew in to feed in the alfalfa early on, with a hybrid of the two species and a domestic Greylag in among them – classic Surrey goosing. 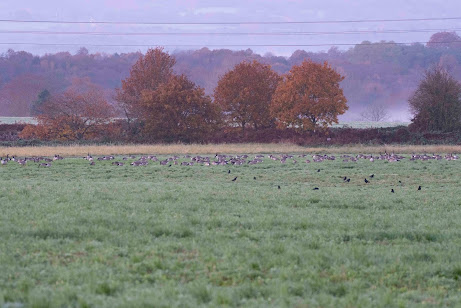 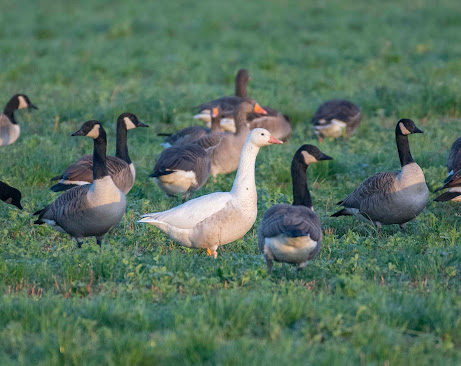 By far the rarest bird of the day was a Little Egret that flew over Hook Lane – only the third site record and my second. This species seems to have declined ever so slightly locally during the last few years (perhaps to do with some severe cold spells in recent winters?) and this was only my third in the local area this autumn. A Lapwing flushed from the alfalfa was also of note, along with two Bullfinches, three Bramblings and a Ring-necked Parakeet. 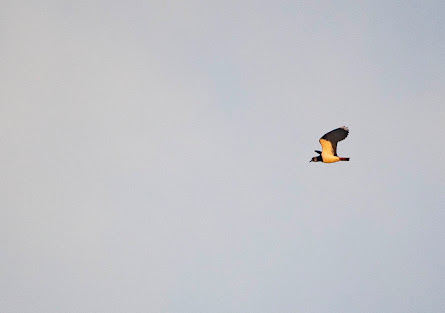 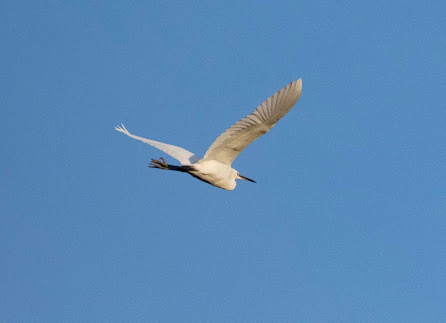 A female Sparrowhawk – one of two noted – caught a Starling at close range in the alfalfa, which made for a dramatic observation. Pleasingly, the Skylark flock was up, with some 50 birds in the northern fields alone, meaning at least 60 were on site. An added touch to a fun morning was the few common species that were in song for the first time in months, including Mistle Thrush and Dunnock. 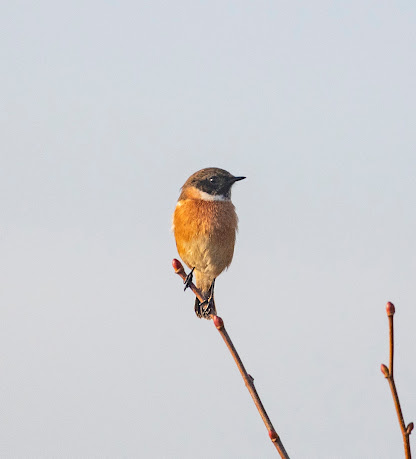 Thursday 18th
It was rather chilly as I walked to the Lammas Lands first thing, where six Snipe, two Reed Buntings and – ironically enough after my comment yesterday – two Little Egrets were noted. Afterwards, Frensham Great Pond was an exact copy and paste of Monday: 17 Pochard and a Kingfisher noted off the hotel and Firecrest calling in nearby holly.
Friday 19th
Today my binoculars were heading off to Austria for a service, which meant I needed to be at Swarovski HQ in Redhill at 10 am. As a result, I took the opportunity to explore the far east of Surrey beforehand. The large area of farmland and shooting estates near Woldingham and Chelsham has long intrigued me, not least due to the fact it has turned up Corn Bunting in recent years (which breeds several miles away in Kent).
A 6 km walk from Warren Barn Farm to Beddlestead House produced 40 species, with astonishing numbers of released gamebirds, corvids and Red Kites the most striking feature. I counted a minimum of 240 Pheasants and 120 Red-legged Partridges, as well as 13 Ravens (including 10 feeding on a Fox carcass) and no fewer than 28 Red Kites – my highest-ever Surrey count – which included 12 sat in the same tree.
In many ways this area (especially around Warren Barn Farm) is like Thorncombe Street, but on steroids; huge, sloping valleys grazed by sheep, small copses, sporadic cover crops and the clear feeling that shooting is king here. However, further towards Beddlestead Valley, it becomes more akin to the Sussex South Downs – big, open arable fields with thick hedgerows. You could certainly imagine Corn Bunting here (I genuinely wouldn't be surprised if they breed, such is the expansive habitat and scant coverage). Today, though, I had to settle for 10 Yellowhammers, which was still very nice indeed.
Other bits of note included a Brambling and Marsh Tit at Pitchers Wood (a second Marsh Tit was singing near Beddlestead House), a juvenile Peregrine overhead, a flock of 85 Fieldfares and 15 Skylarks at Cheverells Farm. An interesting area indeed – I'll be back!
Posted by Ed at 07:34