After the excitement of the last few weeks, things have calmed down considerably during the past 10 days. While mid-September has produced the spectacular for me before, more often than not it can be very quiet, sitting awkwardly between the always productive late August period but before 'autumn proper' that gets underway at the end of the month. This lull has been nicely timed, however, with a busy period for me meaning most of my recent birding has been in the 1 km.

At least five Clouded Yellows were seen over the alfalfa at Norney Farm during an afternoon bike ride.

It was still and mild at Thursley this morning and felt good, though the migrant roll call was a familiar one, with singles of Whinchat, Wheatear, Spotted Flycatcher and Yellow Wagtail seen. Most notable was a southerly movement of Grey Wagtails – four in total. I find early to mid-September is peak time for vis-mig of the species around here.

On the way home Rodborough Common was typically quiet, though a calling Marsh Tit was nice.

It was livelier at Milford Common, where a flyover Yellowhammer was a surprise, though depressingly the first within a 3 km radius of home this year. Another Grey Wagtail flew south, along with a Tree Pipit. A Sparrowhawk pair and six Bullfinches were also noted.

I popped up to Eashing Fields for an hour early afternoon and it was rather birdy in the grey, drizzly conditions. Three-figures of hirundines were heading north into the breeze; a steady trickle of Meadow Pipits were going the other way, with a few Yellow Wagtails among them. Starlings also seemed to be moving on some scale with three flocks over north-west.

On the deck, three each of Whinchat and Stonechat were in The Meadow and a mobile Reed Bunting was roving around. 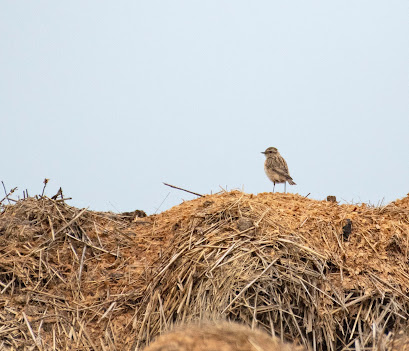 A drizzly, grey morning was illuminated by a remarkable five minutes at Eashing Farm. While forlornly scanning the tiny farm reservoir here for a 1 km Coot or Little Grebe I noticed the local corvids began kicking off – and then I picked up a juvenile Osprey cruising low and slowly south-west.

The bird circled the res once then continued on its way, doubtless sped up by its now large corvid escort. A cracking sight to behold and my fifth local bird of the year (my second in the 1 km!). I suspect it may have roosted along the river valley somewhere. 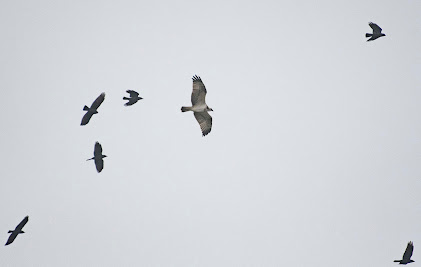 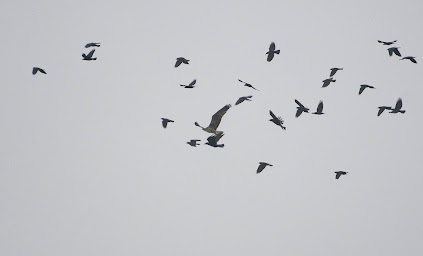 I was about to head back when I heard the familiar – albeit totally unanticipated – call of a Ringed Plover! The vocal bird moved through in a flash, clearly on a mission despite dropping down to check out the sliver of water here. Easily my most unlikely 1 km bird of the year (so far) and a rather outrageous record in general.

The rain of the last 20 or so hours finally abated late morning, and I headed up to Eashing Fields. Needless to say it felt good, with an impressive flock of 80 Meadow Pipits grounded in Top Field. Two Tree Pipits were among them – my first on the deck here.

Two Yellow Wagtails flew south, the three Whinchats were still around, three Reed Buntings were in The Meadow and a steady stream of Swallows moved north. I doubt there'll be many other days where I see such a selection of birds within several hundred metres of home.

It was the coldest it's felt for absolutely ages this morning. I walked the Lammas Lands early on, which were quiet indeed – seven Stonechats and singles of Kingfisher and House Martin highlighted.

I popped up to Eashing Fields late afternoon, where a brisk northerly was whipping round. The gathered hirundines had attracted the attention of a juvenile Hobby, which circled Top Field several times before cruising south. I haven’t seen as many Hobbies as usual this autumn – maybe they had a bad breeding season. 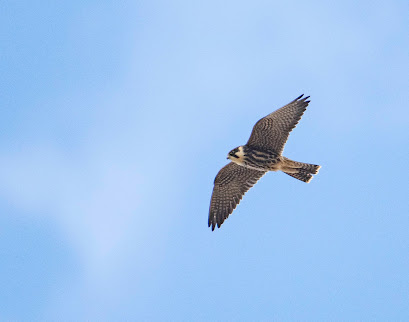 There was a light frost on the ground at Thursley this morning, where a lengthy session was unsurprisingly quiet in the clear and cold north-westerly. Migrant highlights included a late adult Willow Warbler, singles of Whinchat and Yellow Wagtail and two Tree Pipits.

A decent north-westerly push of House Martins numbered a couple of hundred birds at least. A Grayling was on the wing near Woodpigeon Wood as well.

No birding.
Monday 19th
It was a grey, flat morning, and I popped up to Eashing Farm where an impressive gathering of 300 or more hirundines were over the reservoir. They were mainly House Martins, with many juveniles present, though more than 100 Swallows were there and I picked out at least one Sand Martin. 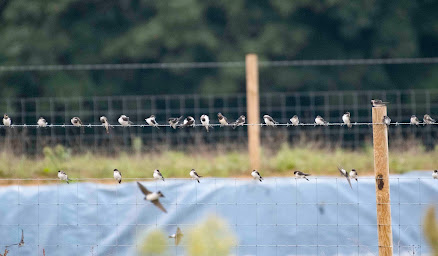