The feeling of being in limbo has continued during the last 10 days, though there have been flashes of excitement . Perhaps the highlight was two Marsh Harriers close to home, though a second local Garganey record of the year was significant. Stonechat passage has peaked, the first trickle of Redwings have gone through and a steady exodus of hirundines has taken place as well. Throw in some waterbody 'patch gold' surprises and a locally rare Lesser Whitethroat, then it's not been too bad.

It felt like a waterbody kind of morning, following a calm and clear night, so I did a local sweep. I started at Eashing Farm where patch gold greeted me on the reservoir: not one, but two Little Grebes!
Save a Mallard pair back in April these grebes are the only birds I've ever seen on the new reservoir here, thus representing a great 1 km year tick. There's one previous Eashing area Little Grebe record that I can find: a bird on the Wey that Peter had back in 1990. A true mega.
I headed to Frensham Great Pond afterwards. As I walked down to one of the swims I noticed a small Tufted Duck flock not far from the shore. A quick scan revealed, to my surprise, a female-type Garganey tagging along with them. The flock immediately flushed, before I could even put my 'scope down.
The Garganey separated and headed to the east end, quickly vanishing into the reeds – and it didn't reappear in the next half-hour. It was a bit frustrating not to get prolonged views or a photo but still a nice surprise, following a bumper year for Garganey nationally. It could easily be several years before I see another in south-west Surrey.
There was a nice variety of wildfowl today: my first Pochard of the autumn (a juvenile) was with a different group of tufties, a moulting drake Shoveler was at the north-west end and two Teal were one of few records I've had at the Great Pond. Little Egret and Kingfisher were noted as well.
Thursday 22nd
A drake Pochard was most unexpected in the mist at Tuesley this morning. A site first for me, strangely it was one of just two ducks present. Tuesley has had a poor autumn and never does well for wildfowl, so this was a particularly notable record …
I checked Eashing Farm on the way back and was rewarded with a heard-only flyover Snipe, which may have been flushed from the stubble field. Another 1 km year tick ...
Friday 23rd
No birding.
Saturday 24th
A rather cold northerly was blowing during a big morning walk around Shackleford and Puttenham. Impressive numbers of passage Stonechats were at Lydling Farm – at least 16, including a single group of 10. A Tree Pipit flew south, a covey of Red-legged Partridges hid in the maize and decent numbers of Goldfinch (120) and Skylark (35) were counted. 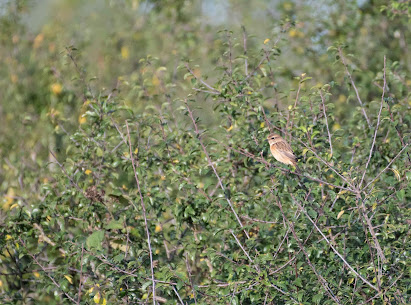 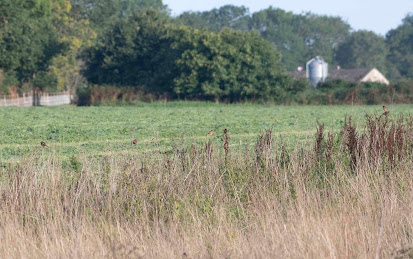 Over the road, a Lesser Whitethroat was a real surprise in hawthorns by the wildfowling pond. A local rare, the bird was vocal albeit always distant. Amazingly only my third autumn passage lesserthroat in south-west Surrey!
By the time I got to Puttenham Common the sun was out and it was predictably busy. Two Woodlarks and a Siskin highlighted – the latter species notable by their absence so far this autumn. Two Kingfishers and a Mandarin were at Cutt Mill.
As it was such a nice day I took an innocuous stroll along the river mid-afternoon. Upon getting to Greenways Farm I spotted two raptors drifting slowly south. I raised my bins and was astonished to see the first bird was a juvenile Marsh Harrier. So, imagine my shock when I panned to the other individual and it too was a Marsh Harrier! 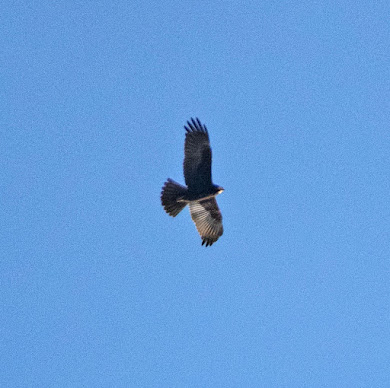 I watched the birds for a few minutes as they cruised over my head. What a bonkers sighting – a single Marsh Harrier is cause for celebration around here, but two migrating together is nuts. I reckon the second bird was a second-year male, adding to the craziness of the record (it'd seem slightly more normal if they were both juveniles). I'd love to know what sort of journey they were on …  Amazing scenes for a few hundred metres from home – number 99 for my 1 km year list.
The rest of the walk was fairly quiet, though a Firecrest was calling in Milton Wood.
Sunday 25th
It felt wintry at Painshill Farm this morning, a feeling enhanced by a flyover Redwing: my first of the autumn. Three Yellowhammers and a Raven were about and a female Stonechat was a site first for me here.
The ongoing Stonechat passage was in evidence at Eashing Fields late afternoon, with at least six dotted around, along with a Whinchat.
Monday 26th
Almost no time in the field today, but I couldn't resist an afternoon twitch to Oxfordshire for the Common Nighthawk (see here). An incredible and ridiculous record … 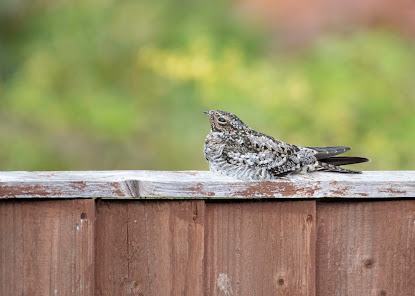 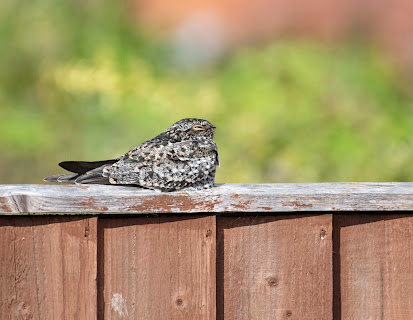 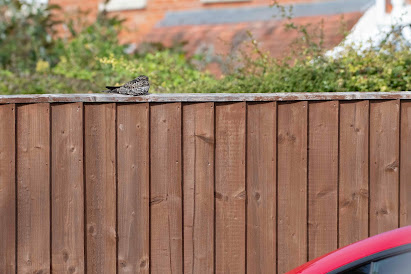 Tuesday 27th
A pleasant morning walk around the Lammas Lands produced 41 species, with the highlight a fairly late first-winter Reed Warbler poking around in Hell Ditch on Catteshall Meadow. A female Teal downriver was only my second site record and a flock of five Redwings tseep-ed north-west. 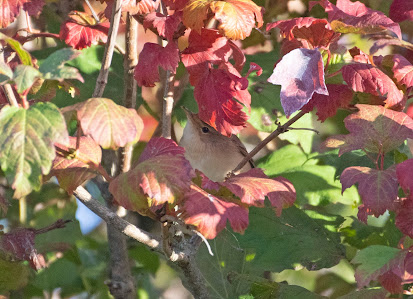 Some 35 Meadow Pipits were present as well, but I only saw two Stonechats and no Snipe.
Wednesday 28th
Thursley looked magnificent in the autumn sunshine this morning, but it was quiet on the bird front. A late Tree Pipit was around the tumulus, two Redwings flew west and three noisy Ravens were about. 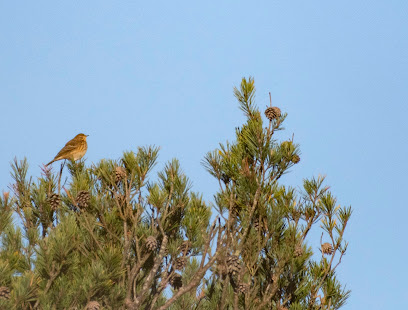 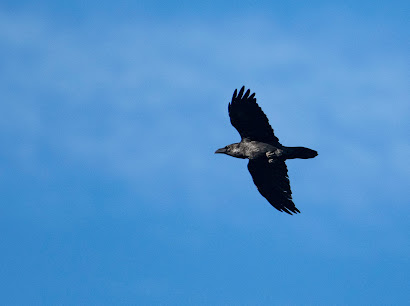 Thursday 29th
No birding.
Friday 30th
A fun hour and a half at Eashing Fields this morning produced 45 species – a new record for me here. Not bad for what's basically a couple of dog-walking fields! The clear highlight was a female-type Yellowhammer that dropped into the hedgerow between The Meadow and Bottom Field, before seeming to fly off south-west. However, I saw presumably the same bird again an hour later. 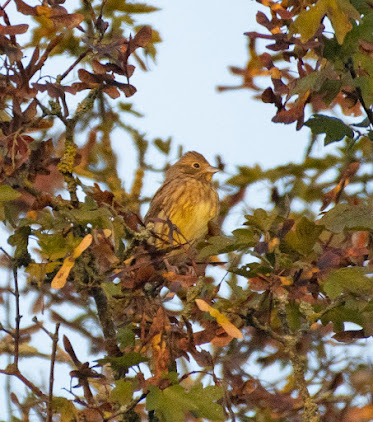 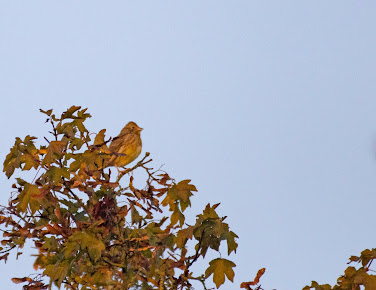 Increasingly tricky locally, Yellowhammer is a new Eashing area bird for me, bringing me to the mighty 100 for the year in my 1 km. I'm quite pleased with this tally, having targeted 90 when I moved in January. It was especially nice that one of my favourite species brought up the magic number as well …
Other bits included 13 Redwings south (including a group of five), eight Stonechats, seven Reed Buntings, an increase in Skylarks and only my second Eashing Fields record of Treecreeper. 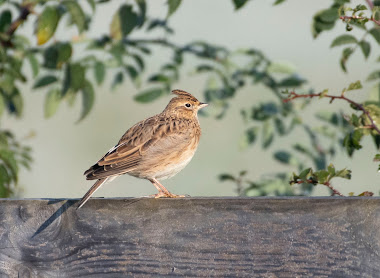