At the end of my last post, I nearly wrote of my anticipation for August. It’s a month that always delivers locally, despite being somewhat maligned by birders. This is probably because of the post-breeding dispersal factor that is far more noticeable inland than it would be at a wetland or coastal site. Anyway, in fear of jinxing it, I didn’t write about said anticipation – it seems that was wise, with the first few days already providing some excellent birding.

Allden’s Hill has been the focal point. On Friday, I combined collecting the microphone with an hour or so of sky-watching. There were a few Woodpigeons and Stock Doves darting about at sunrise, in no real pattern. Then, at 05:41, I clocked a Turtle Dove heading towards me, as it flicked and dashed north-east. It was gone in a flash, but it goes without saying I was delighted to witness this rapidly declining gem grace my patch.

The species is just about annual here (one in 2015, two in 2016, 0 in 2017 and one in 2018) though they are almost always flyovers. Turtle Dove has never been common in Surrey during my lifetime. Nowadays they are practically extinct, save one site close to the West Sussex border (only a couple of miles from my patch as the dove flies) where a pair present last year was followed up by a singing male this year. Just over said border the population is far healthier, increasing slightly as one heads south and east to the modern-day hot-spot (best site in Britain?) of Knepp.


This record would normally make a weekend, but it was eclipsed by a noc-mig whopper picked up in the small hours of Sunday morning. This Stone-curlew was most surprising and apparent reward for a largely poor year of nocturnal recording. The tones are pretty classic and distinctive, the sonogram looks good and the consensus from those I consulted was instantly Stone-curlew. However, it is a slightly atypical call – when I get the time I’ll do some thorough research before formally submitting it.

Following a huge decline and range contraction in the late 1800s/early 1900s, Stone-curlew has increased since the turn of the millennium, reflected in the number of Surrey records. It is almost annual nowadays, though notoriously hard to twitch in the county. The nearest breeding birds are in Sussex, though a far healthier population persists in Wiltshire. There seems to be some sort of passage going on at present, with Dawlish Warren and Prawle Point logging extralimital birds over the weekend.

However, despite being easily the second rarest noc-mig record I’ve been lucky enough to log, it’s actually something that could conceivable turn up at Thorncombe Street one day. Indeed, I’ve daydreamed before about finding one stood in one of the sheep fields one early April morning. The species bred on the North Downs at Compton until the 1800s but, despite the increase in Surrey records in the modern-day, Stone-curlew remains a south-west Surrey mega – the last was at Thursley Common in 1995 (also in August), while the one before that was at Shalford Water Meadows during the Second World War.

There were plenty of other signs of autumn on patch over the weekend. On Saturday, the first juvenile Willow Warbler of the season (appallingly only the third of 2019) was at Selhurst Common, while a typically charming female-type Wheatear was a notably early individual at Bonhurst Farm on Sunday. A flock of 73, mainly juvenile, Starlings at the same site whiffed of summers' close, as did a Siskin or two at Scotsland Brook (though this species seems to have bred at Hascombe Hill this year). 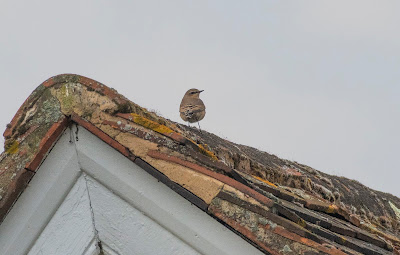 The first Lesser Black-backed Gull of autumn was yet another hint of change, while the appearance of Spotted Flycatchers in random places befitted the season, even if it seems they had a difficult breeding campaign following random days of heavy rain during June and July. Away from patch, a distant Common Sandpiper at a private site was a final local flavour of the month.

Despite all the above, I still had time to dust off my twitching boots and head to good old Pagham for the finally reappearing (and staying put) Squacco Heron. A ninth for Sussex, it's the second for the Selsey peninsula, following one on 19 June 1995. This was my first twitch since the Grey Catbird in Cornwall last October, with the one before that over a year ago also at Pagham, for the American Royal Tern). My twitching game outside of Surrey is pretty shocking to be honest.

As many previous posts will have proclaimed, I love Pagham Harbour, and Saturday afternoon was one of those classic trips during which there was plenty to see. Aside from the somewhat frustratingly brief Squacco at Halsey’s Farm, I also saw a host of waders including Wood Sandpiper and Spotted Redshank, along with two Cattle Egrets and a Yellow-legged Gull. 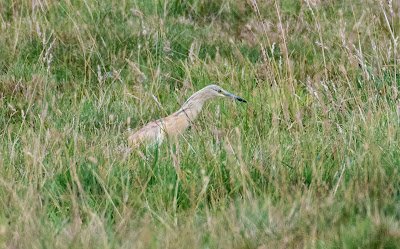 In all, a memorable weekend of largely local August birding. Hopefully there’s plenty more to come in the weeks ahead.
Posted by Ed at 04:29