October has continued its excellent form here at Thorncombe Street during the last week. Indeed, it’s been one superb month during a really fun, successful and positive year on patch. So good, in fact, that two year ticks during the last few days mean a new year list record has been achieved, something that never really seemed realistic after a combination of free time and good birds in 2017 saw a very high bar of 123 set – some five better than any other annual haul.


Promising vis-mig conditions on Wednesday were a let-down, with the forecast north-easterly switching to a barely noticeable east-south-east wind by sunrise. Save 1,295 Woodpigeons, 251 Redwings and a Brambling, there wasn’t much to report.

Snowdenham Mill Pond has been consistent in its wildfowl array over the last few weeks, with numbers of every species down apart from Shoveler, which at times has been the commonest duck on the pond.

Said gentle easterly airflow produced a phenomenal fall of Black Redstarts in south-east England, with 50 at Dungeness an example of the extraordinary numbers involved. If you’ve kept tabs on Twitter or the bird news services during the last week, you’ll be aware that Surrey has cashed in, with at least 10 sites hosting birds.

Enthused by this, I headed to Bonhurst Farm on Wednesday afternoon looking to repeat the discovery of one after the long-staying female last year. I even ventured up to the Thorncombe Street Area northern outpost of Hurst Hill Farm in my failed attempt to find any.


Steve came down for ringing at Bonhurst Farm on Thursday, with the wet forecast thankfully holding off for a few hours longer than expected. Despite the gloomy conditions we enjoyed a profitable session, trapping 24 new birds and three retraps of six species. Best of all was a first Treecreeper for the nets here, as well as a very worn Goldcrest, suggesting that the little sprite had perhaps made a sea crossing (or at least a lengthy journey) not long ago.

A few bits flew over in the dank conditions, including three Skylarks and a few winter thrushes. Best of all, however, came at 10:01 while Steve was processing a Goldcrest – a Snipe. It was first heard calling in the gloom before we picked it up, as it rocketed south.

A fairly common bird in Surrey, sure, and one of the most under recorded species here without a doubt. It was still, though, my first on patch since 18 March 2015! As a result, a most welcome year tick, and one that equalled my previous best of 123 …

Saturday was thankfully wet and windy, as there was a lot of sport on television. A very brief patch visit proved quiet. A thicker head than usual on Sunday morning made it both hard to get up early and bear the freezing cold north-westerly wind for a vis-mig.

Again, it was quiet, though three Hawfinches north-west at dawn continued a good run for the species here, shades of autumn 2017 when the crazy invasion took place. Of the Hawfinches I’ve had in the last week or two, I’m not sure any are moving that far (indeed some have dropped in) – perhaps we’re going to have another good autumn/winter for the species.

The other highlight was a Mute Swan that lumbered south, only my third on vis-mig here. Picked up at a great distance as it arrived over Blackheath from the north-east, the huge frame and outstretched neck initially had all sorts of alarm bells ringing.

Feeling fresher and with a little time on Monday morning, I spent a few hours vis-migging from Junction Field for a change. The fine conditions meant Woodpigeons were very much on the move – I tallied up 5,226, including some huge flocks flying south-west over the Wey-Arun Plain, which was shrouded in fog and looking like a giant motorway. Robin’s ‘Isles of Surrey’ perception was very much in effect. This will likely be my biggest autumn count of the species this year.

Another Hawfinch flew south-east, an impressive 25 Yellowhammers were ticking to and from Broomy Down and three Lesser Redpolls buzzed south. It was a fine autumn morning, but the big result took place at Bonhurst Farm.


Almost inevitably, given the influx, a Black Redstart popped up on wires near Upper Bonhurst. It performed admirably in the sunshine, though typically never in great light for photos.

It eventually worked down to the main farm buildings, where the female last year spent so much time. I left it be, but a steady stream of visiting birders came during the day and it was still present until late afternoon. It lingered until today and John R got some nice footage (see here). 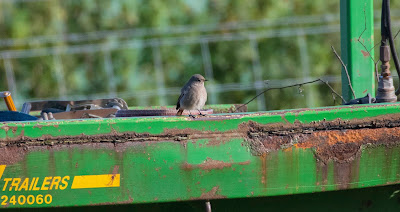 And that marked bird number 124 for me at Thorncombe Street this year. Ironically, it’s happened in the year I’ve actively chosen to take my foot of the year listing and be more thorough with coverage of different sites. The quirks of birding. Despite winter fast approaching, maybe 2019 has another surprise or two to offer yet.
Posted by Ed at 12:40

A brilliant year Ed, and still two months to go...