After several days of much walking and travelling it was nice to have a bit of time on patch this weekend, before a busy week at work. With vis-mig dragging its feet somewhat during September, it typically kicked off while I was away, with Matt having a totally gripping mega mipit day at West Clandon on 30th and Wes and Mark enjoying a vintage Leith Hill tower watch on 3rd.


The first Surrey Redwings of the autumn were logged on 2nd, with many more recorded the following day. This was one of the first species I clocked on my first visit to Thorncombe Street in 12 days on Saturday, with three early Fieldfares seen later on as well – Leith Hill and Canons Farm also enjoyed first Surrey returnees of this species. It eclipses my previous Fieldfare early arrival date of 17 October 2015 significantly.

A single flock of eight Grey Herons, picked up earlier at Leith Hill and tracking the North Downs, was perhaps of continental origin. Later, on Snowdenham Mill Pond, the female Red-crested Pochard was present for the first time since 18 August.


The forecast for Sunday had been heavy showers with a breezy south-west wind for quite a while. As a result, having awoken to the sound of rain lashing down, I was pleasantly surprised to see the forecast now suggesting it’d be dry. Consequently, the brisk south-westerly became ideal for vis-mig.

This turned out to be the case, and not long after dawn flocks of Redwings were bundling south-west/west. I scrambled to New Barn, where I planned to split my time between here and Tilsey Farm. Chaffinches and Song Thrushes were notable by their abundance on the deck, while the Jay invasion was clearly continuing – I counted 27 across the site on Sunday.


In the skies, the Redwings were the main movers (586 a new autumn high count here), though a few mipits, plenty of Chaffinches (67 in total) and both Swallows and House Martins were passing over too. Any October hirundine is nice to see, especially when they overlap with winter thrushes. Four Yellowhammers clicking south was a nice bonus.

The highlight, however, came shortly after 08:00. At the end of a Redwing flock was a dark thrush, which binoculars unveiled as a Ring Ouzel. If the Surrey Hills had speciality species, this may be one of them – they are guaranteed annually at certain sites, including here. Leith Hill is the epicentre usually, with a mighty 28 on 19 October 2014 as good as a county record. 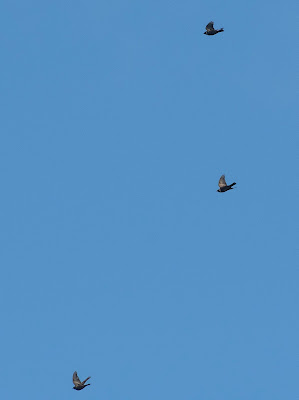 More often then not, I have Rouzels on the deck at Thorncombe Street, so this flyover was novel. It was bettered, however, by a flock of six some 10 minutes later – a truly exciting sight to behold. They remained silent, so I wasn't able to add a smart vis-mig recording to the list.

A record count for me and also an earliest autumn date for a species I didn’t really have on the radar at that point. After the wretched autumn of 2018 (thrush action peaked here in mid-November!), they seem to be returning at a more normal time this year.


It had been an excellent watch in pleasant conditions – surely, it’s hard to beat migration like this on your doorstep? It certainly gives a different thrill to the many I experienced on North Ronaldsay, though pinpointing why isn’t straightforward. Whatever the case, hopefully it’s the start of an entertaining few weeks of local birding.
Posted by Ed at 04:57