Another week, another generally entertaining period of birding in south-west Surrey. The oft-grey and birdless days have been slow going at times, but a sprinkling of decent bits and a surprise Sibe discovery make it hard to complain.


Said Sibe came last Thursday, during what was supposed to be a quick lunch break recce of Unstead with Abel. It was a crisp and fine winter day, with not one but two Water Rails showing themselves in the ditch next the footpath in the South Meadow. A good start.

We reached the east side of the works, on the south side of the lagoons, and it was clear plenty of insectivores were making the most of the sun-provoked midge swarms. A Chiffchaff appeared in the trees we were scanning through, and the striking paleness of the bird immediately had me calling Siberian!

Of course, the ID of tristis isn’t straightforward. The plan was for Abel to pap the bird while I examined it with my bins – the underparts and undertail coverts were clean white, the upperparts Garden Warbler khaki-brown, with next to no hint of green or olive. A large and buffy supercilium, limited green tones on the tail and outer wing and bright lemon plumage to the carpals on the underwing completely a pro-tristis suite of features. 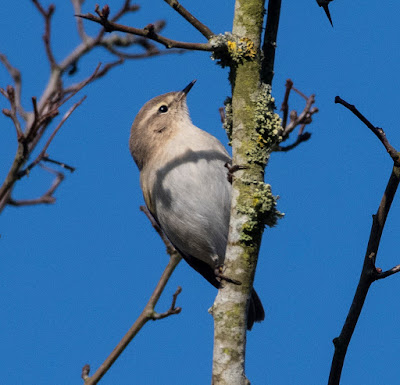 Typically, it didn’t call, and by now Abel had clocked that he’d left his memory card at home! So I grabbed my camera out and reeled off a few shots. It felt really good for Siberian Chiffchaff, and when a couple of clearly collybita individuals appeared, it reinforced my belief. Still, I decided to examine photos at home before calling it.

Other bits included a couple of Reed Buntings (including a leucistic bird, that momentarily had us on for a Sibe Chiff/Pallas's Reed double!), a Teal and two Lesser Black-backed Gull, along with a birder I’d never met before – one of many who still visits from time to time to pay homage to this slowly dying site. The long and short of the warbler ID, once I’d loaded up my shots, had a long look and checked in with a couple of others, was that it was a fine example of Siberian Chiffchaff – happy days! Yet another decent bird at Unstead, which somehow continues to heave and huff out county rarities.


Between Unstead and the conclusive ID, we popped to Shackleford to see the now seemingly happily settled Hen Harrier. It didn’t take long before we located him, quartering his favoured set aside strips. We also bagged Stonechat, Greenfinch, 12 Lapwings and 50+ Skylarks. In all, a superb lunch break – you can’t sniff at two county rarities less than 10 minutes from home!

The previous day, I’d given the patch a bit of work. Winkworth was fairly lively (for Winkworth) – the first-year Mute Swan was still present, my now latest ever patch Chiffchaff was still in The Bowl and Lesser Redpoll, Greenfinch and Reed Bunting were all logged.


Afterwards, a short walk through the Gatestreet Farm part of the central section was surprisingly productive. The highlight was two Crossbills flying north – my first on patch since 20 June, after a very poor autumn for the species. At least two Yellowhammers were commuting to and from Broomy Down, some 21 Meadow Pipits were among livestock and a Marsh Tit called in Poplar Avenue.

One of the reintroduced White Storks has decided the enclosure is no longer to its liking, and can be seen at various spots in the central section. Usually, as was the case during this visit, it’s not far from the enclosure. A few of the storks have paired up over the autumn, and on mild days much displaying and bill clacking can be observed. With several nest platforms erected, perhaps there will be a breeding attempt in 2020.

Despite rather uninspiring weather on Saturday, a few whistle-stop tours of local sites proved entertaining. On patch, at Snowdenham Mill Pond, a pre-dawn Little Egret was only my third of the year at Thorncombe Street. A Marsh Tit was also here. At Bonhurst Farm, I was delighted to locate the Little Owl pair, along with a Raven and good numbers of winter thrushes.


I later checked in on the harrier (present, along with good counts of 90+ Skylarks and 70+ Lapwings) and Siberian Chiffchaff (also present). The latter was very elusive in the breeze, but was pleasingly heard to call (as it had been by Kit B earlier). Jeremy G had a Woodcock at dawn – presumably this species feeds here nocturnally in the winter.

I have a bit of a thing at the moment regarding local Barn Owls, and finding a regular spot for them. While this has led to Hen Harrier and Merlin discoveries, it hasn’t produced any Barn Owls! So, on Saturday evening, I followed up some local news of two (and two Little Owls) at a site near Dunsfold. I dipped, in poor conditions, though one Little Owl was calling.

Sam J was back home on Sunday and we ended up spending most of it in the field. We conducted solo missions first thing, though, with Tuesley Farm and the patch being pitifully quiet for myself. A strong breeze hampered things all day, and we dipped the tristis at Unstead, though four Water Rails was a good count – there must be loads out there.

We then looked forward to the banker Hen Harrier – a would-be Surrey tick for Sam. We bumped into Eric S at the parking area and walked the site with him, while he recalled wondrous records from this area from years gone by (Quail, Caspian Gull, Corn Bunting … ).

Of course, the harrier chose now to go AWOL, and our dip was compounded when Dave B messaged to say he had it at Thursley Common! A bit frustrating, but we figured it may well return later, especially as Dave watched it fly off towards Hankley Common. We then swung by Cutt Mill Ponds, where an impressive 17 Goosander were mainly on the house pond, though three redheads were on The Tarn.

After a break for lunch, our sawbill experience had us craving more ducks so we headed to the wildfowl epicentre of south-west Surrey – Squire’s Garden Centre in Milford. Sadly, the glory days of resident White-headed Duck and Smew are no more, but four miserable looking Goldeneye were knocking about. Best of all was a silver-ringed Black-headed Gull, though annoyingly we couldn’t read the code, despite trying hard ('21' is as far as we got).

Next up was Chiddingfold Forest, an area I have my eye on ahead of 2020. We explored the central section, right on the Sussex border. Weirdly, another silver-ringed one that got away occurred, this time in the shape of a Lesser Redpoll, one of 18 we tallied. Aside from 4 Marsh Tits, it was quiet, even before the heavens opened …


A pit-stop at Snowdenham Mill Pond, where my first Shoveler in a few weeks was scored, was completed en route to dusk at Shackleford. We hoped the harrier would be knocking about before roosting, having been seen again at midday, and maybe even a Barn Owl would appear. Sadly, though, the wind really picked up and it was deathly quiet – no harrier. Hopefully that’s not the last of him.
Posted by Ed at 07:02