After writing about the variety of local delights in my last post, things have quietened down a bit this past week. Patch remains slow going, and it was left to the Shackleford Hen Harrier to illuminate the weekend thanks to a wonderfully close encounter on Friday.


On Thursday, I opted for Winkworth first thing with unusual wildfowl on my mind. Technically I got that – the first-calendar-year Mute Swan on Rowe’s Flashe was the first for the arboretum since 27 February 2017. It wasn’t quite what I had in mind, though. It was still there on Sunday.

A late Chiffchaff, flyover Reed Bunting and displaying male Sparrowhawk were the other birds of note in mild conditions. A hike around the Compton/Loseley Downs and Loseley Park followed, but it was super quiet – another each of Chiffchaff and Reed Bunting, 42 Greylag Geese and 20 Fieldfare ‘highlighted’.

These downs must once have been full of birds: Cirl and Corn Bunting used to breed, as did Stone-Curlew. Sadly, the core area of farmland at Conduit Farm is intensively farmed – there’s not a berry-filled hedgerow, raptor-tempting set aside or winter cover crop in sight. Compared to the farmland at Shackleford, for example, it’s truly a ghost town. A few Skylarks are usually as good as it gets, though the fields north of Binscombe are a bit better.

Shackleford was on the menu on Friday morning, though after my first trip to Thursley in a while. I had ambitious hopes of finding a Great Grey Shrike, but sadly it seems the second successive blank winter at this traditionally fail-safe site is on the cards. A scenic, three-mile trudge didn’t produce much, save a good count of 11 Dartford Warblers and a flyover Brambling (which seem to be thin on the ground locally at present).


It was back to Shackleford afterwards, where the Hen Harrier had resurfaced following the run of wet and windy weather. Walking down the main, tree-lined path, it didn’t take long for the bird to show itself. And how it did.

Initially quartering the hedgerow south of the set aside, it then took to hunting over said margin and occasionally dropping into it, before flying out again. While it could clearly see me, it obviously didn’t care for my presence – this bold young lad has probably seen few humans before, and is thus unaware at how certain members of the shooting industry don’t particularly like them. No apologies for the below photo-fest … 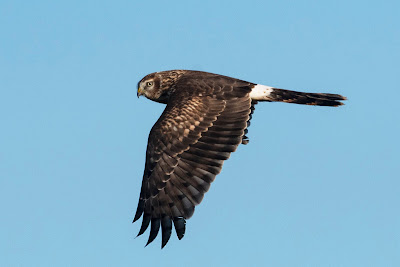 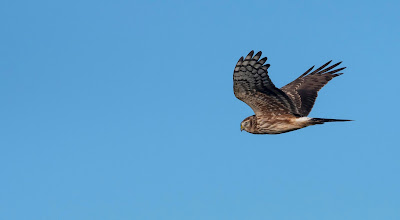 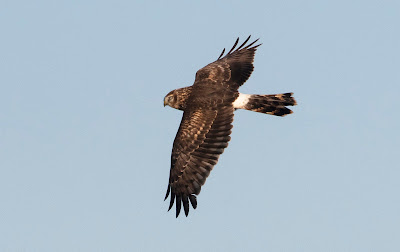 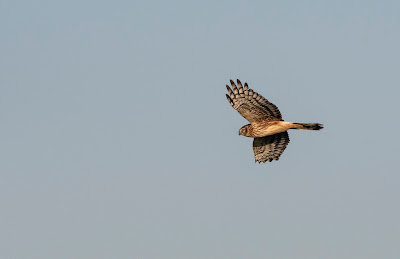 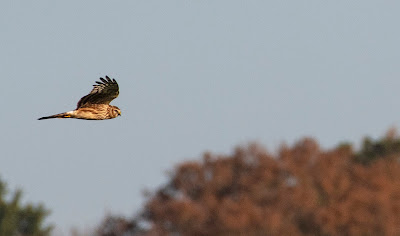 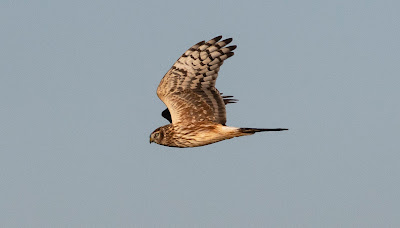 A calling Little Owl was a nice site first for me on the way back to the car. The harrier drew a steady line of admirers over the weekend and has racked up nearly two weeks on this tiny slice of well-managed Surrey farmland. However, yesterday, Carey L watched it thermal up high before departing out of sight to the south – surely it has now finally left? A truly memorable bird.


Saturday was non-birding, but I was able to get out on Sunday to give the patch a whirl. It was still rather quiet, but nice weather made for an enjoyable four-mile completion of Winkworth and the south section. At the former site, a Lesser Redpoll was noteworthy, as was another at Scotsland Farm later. Like Brambling, they have been thin on the ground this autumn.

That and a Firecrest, in holly at Selhurst Common, were highlights of the south section stroll. Best of all, though, was my latest ever patch Chiffchaff (and first for the month of December), with a bird calling at New Barn Pond. Indeed, despite the quiet nature of the visit, some 55 species were logged during the morning – not bad for the time of year.
Posted by Ed at 03:41