A long weekend in Scotland

I’ve spent the last few days in Scotland, in the company of Abel, Matt and Sam. What was initially a solo raid north of the border for a couple of goose lifers, plus a look for Capercaille (a species I’m writing a feature on for work in a couple of editions time), grew into a group trip which would attempt to clean up on the resident Highland specialities, all or most of which were ticks for Abel and Matt.


While it was a thoroughly pleasant break with friends, which included typically awesome scenery, the avian results were disappointing – we missed a few targets and scored rather underwhelmingly with others. Storm Brendan wreaked havoc on our one full day in the Highlands; the final morning saw several inches of snow fall. Anyway, all reasons to go back up some time soon …

I’ve visited Lewis, North Uist, Orkney and Shetland during the last four years, but haven’t birded the Scottish mainland (properly) since 2015, when I did the classic Cairngorms/Speyside circuit for the first time. As a result I was looking forward to this trip. We set off on Saturday afternoon, stopping off in Cumbria overnight before recommencing our journey north early doors on Sunday (picking up Barn Owl over the M6 near Tebay on the way).

We were in the Ayrshire outback of New Cumnock before dawn. Our quarry was an adult white morph Snow Goose, which has been in the area since October. In the upland habitat, a convenient vista at Auchincross Farm allowed for a big area to be scanned – it didn’t take long at all for the bird to be picked out, still roosting on a loch. 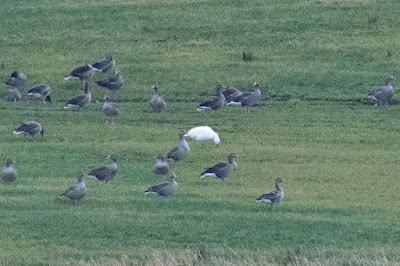 It soon flew with 150 or so Greylags, before landing in a field and feeding. Distant, but a good start to our congested itinerary. We decided that a bird on the west coast of Scotland, with Icelandic Greylags, was good enough wild vagrant candidacy for us, though a nearby flock of Canada Geese wasn’t ideal.

While here, we were treated to three Hen Harriers (including an adult male) and at least one Merlin – at one point the diminutive falcon mobbed one of the harriers, above the goose flock, which was quite spectacular. Having enjoyed good views and used up less time than expected, we chose to continue north via Slamannan.


Upon arrival, a quick scan of Fannyside Loch yielded Goldeneye. We then headed north of the village, towards Jawcraig, where we couldn’t initially find any Taiga Bean Geese. The flock here is one of only two that winter in Britain and, with the depletion of the Yare Valley birds, is easily the biggest. Up to 150 have been recorded this winter, but things were initially looking bleak for us. 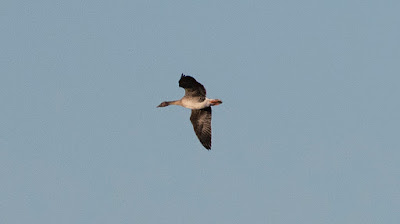 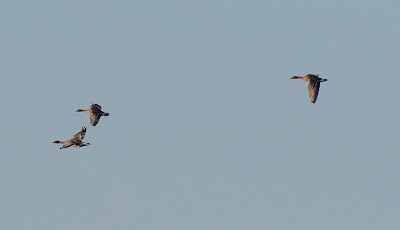 However, eventually three flew over, calling to boot. A further four were then picked up nearby, also in flight. Unfortunately, they landed out of view, so on the deck views weren’t possible, which was a bit annoying. Still, a lifer for Abel and Sam, which we took after initially thinking we’d run out of time to find them. A few Lapwings and two Pink-footed Geese were also logged.


With the sun out, we pressed on, keen to give Ptarmigan a go in the calm weather. On the way north, we were pleased to jam into 10 or so roadside Tree Sparrows at West Tofts, north of Perth. This mild winter has resulted in little snow on the tops in Scotland, meaning Ptarmigan have had no need to drop down the slopes and thus make them far easier to see.

The classic site of Cairn Gorm car park – from where you can normally ‘scope birds – was a no go; a friend of mine had spent four hours the previous week walking the tops there and seen one bird! We gambled on Glenshee, in Deeside, some 665 m above sea level and where The Cairnwell – at 933 m above sea level – was a long-standing winter site for Ptarmigan.

However, much to our angst we arrived to a closed ski centre, a dusting of snow and absolutely loads of Red Grouse – not ideal. In hindsight we should have cut our losses and headed for another target, but we decided to climb The Cairnwell in the hope the birds were up there. In short, they weren’t – a frustrating four-mile hike produced zero Ptarmigan, about a hundred Red Grouse and two Peregrines, along with several Mountain Hares.


Abel and Matt both needed the species and were particularly keen to see them, so it was disappointing. To add insult to injury, my camera hood smashed. After we left, a solitary Dipper on the Cairnwell Burn seemed scant consolation. Several beers that evening washed away any sorrow.

The following morning we had eyes on only one prize: Capercaillie. This beastly grouse has become mythical in a British context, with much taboo over remaining sites and a rapidly declining and disjointed population making them very hard to see. It’s well known you could spend a week smashing the Speyside forests and not see any, but some exciting and recent gen meant hopes were high.

Storm Brendan had other ideas, though. The weather was beginning to threaten at a pre-dawn Black Grouse lek site, and by the time we’d entered the Caper wood it was really gusty. A Crested Tit and two Crossbill were heard-only, but we weren’t paying attention to passerines much, as we carefully paced the wood.

Fast-forward three hours and several miles walked, and enter a big, fat dip. It was totally gutting, given the nature of the gen, the effort, the amount of Capercaillie excrement seen and the fact all three of the others had never seen one before. Of course, this species is infinitely hard, but it didn’t take the edge off the failure (nor did the three Woodcock flushed). We tried another, nearby site, briefly, but didn’t score.

Determined not to let this dip bring the day down, we headed to Loch Garten so Abel and Matt could tick Crested Tit. By now the wind was really blowing and, despite one being heard and seen, what was essentially another dip came and went. Grim. We thought the coast would be a better shout and, as the drake King Eider had been seen from Nairn during the past few days, we angled for that.

We set up shop in some dunes east of Nairn Harbour, and began to scan. There was a great selection of birds here – a mighty raft of some 300 Scaup, Black-throated Diver, Slavonian Grebe, 50 Long-tailed Duck, 30 Common Scoter and 80 Eider. A couple of Hooded Crows were also about, as were some intergrades. However, perfectly fitting with the last 24 hours, we couldn’t pick out the King Eider among any of the Eider groups. Further frustration …

Apart from Snow, Cackling Goose was the other instigator of this trip, but the bird with Pink-feet near Inverness at the end of 2019 hadn’t been reported since. Still, an intermediate morph Snow Goose and two Grey-bellied Brant were in the area and would inevitably lift the spirits if found. Despite driving around a huge area, though, we found not one goose.

By now the extent of our miserable day had become comedic, so it was fitting we ended the day failing to see a regular Waxwing flock in an Inverness cemetery in driving rain and heavy wind … more beers were required that night!

We awoke on the final morning to a blanket of snow, far heavier than forecast. Sam had to head to Edinburgh for an interview, but the three of us had only one species on our minds. And, to huge relief, we finally scored. At the same site we’d thrashed yesterday, within minutes of taking a track a female Capercaillie crashed out of a pine and disappeared into the deep forest. Phew. Unsatisfactory views, but we had managed to connect.


Fairly pumped and following Capercaillie footprints in the thick and fast falling snow, we were sure we’d bump into several more in a fashion we’d anticipated the previous morning. So, it was ultimately a bit disappointing that no more were seen, though perhaps unsurprising given the wind was still blowing strongly. If the female had been seen at the end of this walk, no doubts our feelings would have been a little different.

Two crossbills, with a heavier call, were of note – probably a candidate for ‘Scottish Crossbill’, whatever that actually is … Matt also had a probable Goshawk. After, we went to another caper site but, once more, had to settle for tantalising hints, this time in the form of extensive Capercaillie fencing.

With Abel and Matt wanting tickable views of Crested Tit, it was back to Loch Garten. This time we scored – one bird showed superbly, though briefly. Far better, though, was a magical experience with some 50+ Coal Tits. Loads of these birds were around the feeders here and, as soon as we put some seed in our hand, they eventually got up the courage to fly into our hands and pick out their favoured sunflower kernels.

It was a brilliant experience, with as many as four landing in our palms at a time. They got so confident that they’d land on us even as we walked, and sometimes used our hands simply as perches. A nice way to end the trip. As we packed the car back at the house, we had a Brambling from the front drive. A long drive home brought the trip to a conclusion.

Good company saved the day to an extent, though you can’t sniff at some quality Scottish species, two or more lifers for everyone (bar me, but I was very happy with the one) and of course a Capercaillie. Weather and a lack of time ultimately combined to get the better of us, but we’ll be back – it’s a beautiful part of the world and, as has been the case personally for years, the lure of the caper remains strong.
Posted by Ed at 01:03