As I write this, it’s at the end of a succession of particularly gloomy January days. I think most birders end up dreaming a lot during this month, whether it be of anticipation-filled spring days in the field, recalling exciting moments from the past or simply thinking of places far warmer and pleasant. I have certainly thought of all three. That said, one discovery and a couple of local wintering niceties have kept things ticking over.


On 17th, a routine check of Unstead burst into life (literally, in a sonic sense) when a Cetti’s Warbler gave itself up from a thicket between The Lagoon and South Meadow. This wouldn’t generate much care in most of southern England, including north Surrey, but for some reason this remains a rarity in my part of the world. Despite birds wintering at Unstead on and off since the mid-2000s, I’ve never caught up with one so was most pleased to add it to my local list.

Of course, it didn’t show, and only sang twice more before going quiet. I came back the following day and was delighted to hear it again – I even managed some low-quality recording (listen here). Good times, but surely this species will be regular in the Wey Valley in time. It is indeed curious it isn’t already, though perhaps they are simply under recorded – Sam had one down the road from Unstead, at the water meadows near Broadwater, back in December. Maybe a small population winters in the Wey Valley (maybe they were the same bird).


Whatever the case, the cold snap that followed put a stop to any singing and I haven’t heard it since. Said cold snap naturally triggered excitement – for us millennials anything under zero and a bit of frost is exciting. Unsurprisingly but disappointingly, there was little bird action on the back of it.

One species that did seem to move about was Stonechat, with the hard weather presumably pushing birds off heaths. I encountered a pair at Loseley Park on 18th, which was a pretty curious record, though not as ludicrous as a Barnacle, two Barnacle x Canada and a Bar-headed Goose in with a big Canada and Greylag flock at the same site! Another was at Hambledon farmland the following morning, where to be fair I have had them before. 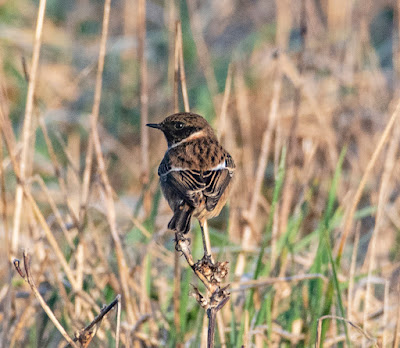 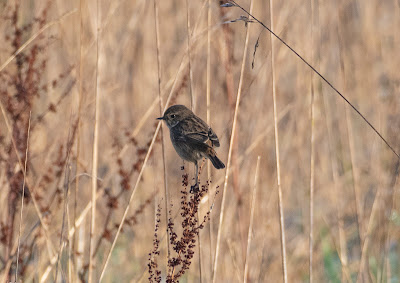 What I haven’t had there is Woodlark, so a flyover – seemingly moving from Hydon’s Ball to The Hurtwood – was most welcome. A good number of winter thrushes (240+) was also logged, though not much else, especially finches – five Chaffinches and two Siskins a totally paltry haul for arable farmland. It was the same the previous afternoon, when I explored the farmland south and west of Loxhill for the first time – a shocking 13 finches. 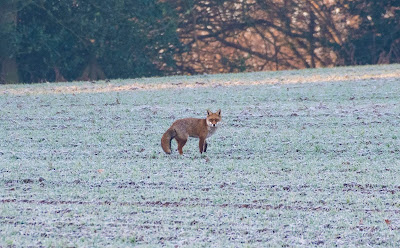 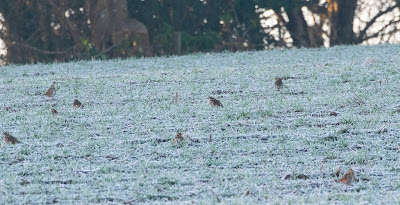 Indeed, I’m not sure how much I’m in a race to go back to the Loxhill area. Technically there are owls (only the ‘common’ ones) in this part of the world, but a late afternoon walk delivered none. A Marsh Tit was best (in some OK looking LSW habitat) but otherwise the neat, trimmed countryside held very view birds.

Back to Stonechats, and the Shackleford pair have still been braving the airfield path. A few visits there have been quiet though, with no sign of the Hen Harrier, which is still popping up at Thursley Common most days. I saw it there on 20th, distantly – it’s seemingly roosting there but spending much of its time elsewhere, probably at Hankley, Churt Common and local farmland. Indeed, maybe I’ll catch up with it at Shackleford again at some point … aside from the harrier, Thursley was quiet, and I didn’t find my hoped-for shrike or Merlin.

After some heavy rain while I was in Scotland the water meadows were looking promising for a bit – seven Little Egrets in Hell Ditch on 17th was a good count. However, the frost then came, covering any open water. Thus it was clearly a better time to search for the Lammas Lands Jack Snipe Peter O found on New Year’s Eve.


Despite a few dog walkers when I visited on 18th there was a remarkable number of Snipe – at least 32 in an hour and a quarter. Also, the main prize was flushed just north of the old fishing pond. Perhaps a regular local spot for the species (and other waders during passage); shame about the disturbance it gets, though.

As you can tell, patch hasn’t been getting much attention … it’s always quietest in winter, when a few sites need to be clicking to make a visit worth it. Unfortunately, as mentioned in previous posts, none of them are. It’s been a really slow month – I will finish on 66 species; 15 fewer than January 2019! The lack of wildfowl is stark – still no Shoveler, and I only ticked Tufted Duck (a single drake, and the only one so far) on 19th. Grim times. The place will kick into life in March, though.


These mild winters will only mean winter birding in Britain gets worse. It’s quiet locally, in Surrey, in the south-east and in the entire country. No hard weather means fewer waterbirds, and thus fewer raptors and so on. Autumn seems to finish later and spring start sooner. I suppose weirder vagrants and more exciting summer visitors/breeders will be the exchange.
Posted by Ed at 09:55