On bike and through window

Birding on my one daily permitted exercise outing and through my flat windows has been the state of play since my last post. And it’s not actually been too bad. Having joined Steve G’s BWKM0 challenge (see here), which involves recording as many species as possible from one’s home, this has inevitably taken up most of my birding time. However, my near-daily bike rides have also been great fun, resulting in attention on areas closer to home for the first time and, unexpectedly, keeping my south-west Surrey year list going.

As birding from windows and a bike (though I don’t always take my camera on a ride) isn’t ideal, many of my recent photos are of record shot’ quality (or lower!). Apologies. A flat photo gallery from the last 11 days before is below, before a run through my bike birding of late.

So, it’s been good fun. I’ve added 10 new species for the flat in 11 days, which shows how much attention I’ve paid to avian things here before. Other, non-photographed highlights, include a couple of distant Skylarks handing in the air over Loseley farmland (just about string-able through a ‘scope), a Swallow on 31st and today (4th) and a singing Marsh Tit on 26th. And, of course, noc-mig …

It’s been weird watching the ‘mainstream’ birding community take to nocturnal migration during the last few days. It coincided with the annual mass departure of Common Scoter (see here). I scored this seaduck over the flat in the small hours of 3rd, when two flocks were recorded, though they were a bit distant. 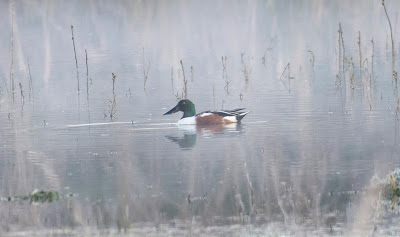 Birding by bike has been fun. The River Wey valley is a couple of roads down from me and has generally been my exercise route of choice, from Godalming up to Peasmarsh and back. Occasionally forays further afield have been undertake, such as journeys to Milford, the patch and Shackleford. And it was the latter site that delivered the first lockdown south-west Surrey year tick on 25th.

The definition of a brucey bonus. This is not an easy bird in south-west Surrey – I’ve only had two, ever, at Frensham Great Pond in 2011 and over the patch in 2017. The recently ploughed northern fields at Lydling Farm had 13 gulls – 9 Herrings, three Lesser Black-backeds and the below adult Yellow-legged. What a beaut!


Having been a little down about lockdown and the heavily restricted time outdoors (I’ve no garden), this bird was a bit of a lift and showed that it would be possible to enjoy things even within the regulations and also super-close to home. Two Tufted Duck on Lydling Farm pond were a site first.

The following day a quick visit to Winkworth was quiet, save Kingfisher, before a couple of days of not going out. On Sunday it was time to check out my new (and hopefully rather temporary patch) – the Wey Valley from Godalming to Peasmarsh. Starting at Broadwater Lake (another Kingfisher), the first highlight came at Unstead Water Meadows, where a Cetti’s Warbler burst into song near Perry Bridge. 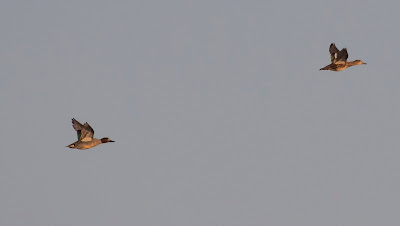 Sam J had one here in December; it was assumed to be the same bird recently at Unstead … had it moved back to the water meadows? Time would tell. This is still very rare in south-west Surrey (I only ticked it earlier this year) and for some reason the species hasn’t colonised the area yet.

A couple of tasty scrapes have been dug on the Lammas Lands at Catteshall, where the new flood defence has been built. They could easily pull in a small wader before the dog walkers arrive. I settled for some wagtails on this occasion, but a Water Pipit (flushed by one such dog and owner) up and calling from the main meadow was a real bonus – is it here they reside in the winter, and move to Overgone Meadow when the water is too high? So much to learn so close to home … 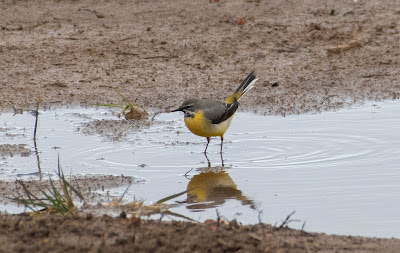 The following day, my birthday, I elected to take the same route in the afternoon. Again, the Cetti’s was in voice and even showing in the thickets as it chased a Wren about. I managed some poor photos. A late Little Egret was at Upper Unstead Farm, but the proper reward came as Unstead SF. 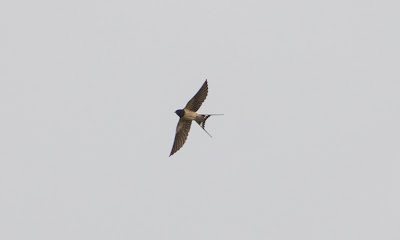 A mating pair of Shoveler on the Lagoon was a surprise, though sadly they have since left, along with the few remaining Teal (and flooded fields too, unfortunately, which had looked ripe for waders). Unstead Lock, near Peasmarsh, held a Firecrest. It was a similar cast the next day (including the Cetti’s), save a Lesser Redpoll and Coot (Unstead Water Meadows mega per Sam!) just south of Tiltham’s Corner Road and a Water Rail at Tannachie.

The Coot, Cetti’s Warbler and Little Egret were all still present on 2nd, but more excitingly there was a (the) Cetti’s singing at Unstead SF. So, it was confirmed there are in fact two birds in the valley … at least until Peter O emailed me informing me of a third down towards Westbrook. Exciting times! Surely this warbler has finally colonised the area (and has probably bred somewhere in the last few years undetected, with perhaps some of these singers young from recent broods). A Lapwing flushed from Flooded Field was my first at Unstead SF this year. 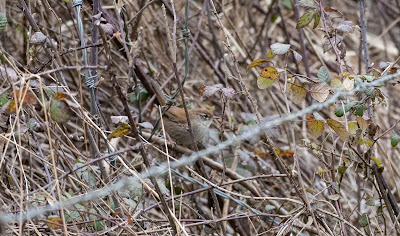 Yesterday (3rd), I went for a road-based route through the west side of the patch and back via Unstead. It proved a good decision as, despite Snowdenham Mill Pond being quiet, Bramley Park Lake delivered:

Finally, the female had reappeared, the first time I’d seen her since 19 October 2019. This questionable lass was with her even more questionable hybrid young, but you’ve got to take what you can in these parts! Nine Tufted Duck (plus seven at Winkworth) hinted at the annual early spring aythya passage here, though no Pochard among them – it seems likely I’ll miss this species on patch this year for the first time.

The forecast for today was south-east wind with heavy morning fog – I planned to get out after it had cleared. However, I awoke to a clear sky, so gambled on a cycle up to Milford (which involves several hills and won’t feature often!). However, as a got to Busbridge, the fog rolled in ominously and by the time I was at the site visibility was shocking, so bad that I had to circumnavigate the entire waterbody in order to see the shore.


Indeed, a circuit yielded nothing, and I rued the fog ruining my one outing of an otherwise lovely spring day. However, just as I was peddling off, a familiar (but rather out of context call) came from over my right shoulder to the north.

Boom, I believe is the phrase. What a touch of luck! I quickly picked up the bird as it continued to call a lot, dropping down to the waterbody. I wasn’t keen to go round again, especially as it wasn’t technically exercise, but decided to have a quick look. It was nowhere to be seen, alas (probably hidden in the middle where I couldn’t see through the fog).

To boot, it was a south-west Surrey lifer: number 175 no less. Presumably it had been on the move during the night and the dawn fog had forced it to ditch down. Despite not seeing it again, yet another bonus would come of my extra loop.

I didn’t initially clock it, such was the early date (my earliest, ever) and generally non-Yellow Wag conditions. But it called several times and I eventually spied it as it bundled north amid a trickle of Meadow Pipits. I’ll get more of these this year, but a lovely spring bonus (normally only see autumn birds locally), albeit a little odd to see before Willow Warbler and House Martin.


I’m sure we have a good few weeks of lockdown left. But, with flat birding and bike rides delivering the goods so far, I should be kept sane.
Posted by Ed at 06:44