A mixed end to October

October has been good locally, but the last nine days of the month have been mixed at best. I’ve picked up a south-west Surrey lifer, but missed one too, and the largely wet and windy weather hasn’t been fun. No complaints at how autumn 2020 has gone though, as it looks like things are slowly slipping into winter birding mode.

No time in the field. On the Friday, a Skylark flew over while I was working from home.

After a day of wet and windy south-westerlies, I gave Frensham Great Pond a go – and for a change came up trumps here! It was incredibly gloomy first thing, with little more than singles of Kingfisher, Crossbill, Chiffchaff and Firecrest and a few Lesser Redpolls initially of note. I eventually worked round to the south-east corner and saw nine Pochard – my first in south-west Surrey since April. All my records locally this year have been at Frensham, which is a bit worrying …

As I was watching them, I noticed an egret land in a reedy area to my right. I then noticed it had a big yellow bill: my first south-west Surrey Great Egret. While a regular fixture in many places now and becoming far less rare in Surrey (where it’s no longer a description species), Great Egret remain bizarrely mega in south-west Surrey. As far as I can see, this is only the seventh, six of which have come at Frensham. Presumably this will change in time but still nice, and number 155 for the local year list.

The weather was pretty naff for the rest of the day, but after lunch I decided to join Matt in the unlikely location of Crawley for a Dusky Warbler twitch. As mentioned in my Little Bunting post, there will be a lot of inland Sibes this autumn/winter – they just need to be found. And whoever dug this out, in a small copse on the edge of a recreation ground in a large town, deserves huge praise.

Initially very elusive, the bird – only my second in Britain – eventually popped out and showed OK three times, allowing for record shots (and recordings) only. Still, nice to see. If it had turned up a mile to the north, it would have been a Surrey first … other bits here included a calling Kingfisher and a few overhead Siskins.

A really nice session in the autumn sunshine at Thursley. Things got off to a great start in the half-light of pre-dawn along the boardwalk at Pudmore, first of all when I noted a Yellowhammer on the track. It was weirdly tame but eventually flew to a pine and then off towards Shrike Hill. Nowadays, it’s a real rarity at Thursley, with just 12 records between 2008 and 2019. It was indeed a site tick for me …

About 10 minutes later, much to my surprise, a Great Egret flew east. Talk about London buses – I only saw my first in south-west Surrey the day before! This was surely the same bird and, despite seeming to drop into Forked Pond, I couldn’t relocate it. Only the second site record, after one in 2002 …

The rest of the walk (mainly around Ockley and South Bog) was good fun. Woodpigeons were moving overhead in their hundreds and some 20 Crossbills were about. Kingfisher and Coot were at Forked Pond, along with a Chiffchaff. A mixed flock by Merlin Mound held a / the Yellowhammer, which showed a lot better than earlier. At South Bog, a group of Reed Buntings and Lesser Redpolls, totalling some 40 birds, received scrutiny but held nothing rarer. 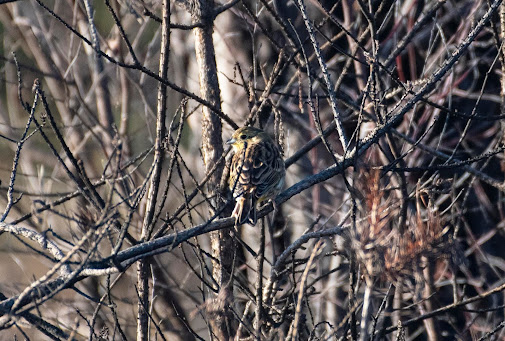 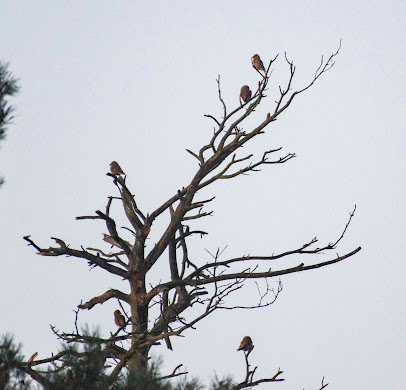 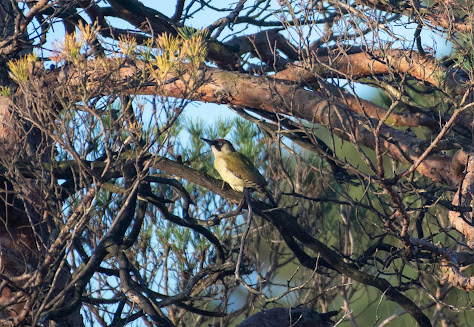 At dusk, 20 or so Pied Wagtails were seen from my kitchen window presumably flying to a roost.

I went for something a bit different today and decided to walk Royal, Bagmoor and Rodborough Commons in a loop – areas I have hardly ever visited before. Parts of Bagmoor and Rodborough looked quite good and there wasn’t many people around, so I'll visit again in the winter. It was fairly quiet, save an obvious presence of finches including a Brambling over a Christmas tree plantation east of Bagmoor and decent Lesser Redpoll numbers. Two Shoveler on the small pond on Royal Common were not expected.

A quick stop at Shackleford on the way back was lively, with a few mixed flocks congregating on the big north fields. Among them was a Yellowhammer – good here – and, to my surprise, a flock of Lesser Redpolls feeding on the field margins with Linnets and Reed Buntings. Not the kind of place I’d normally expect to find this species.

A Tawny Owl was heard from home after dark.

A day off, but the weather was rubbish so I had a lazy start. A mid-morning visit to Unstead was steady, with singles of Little Egret and Lapwing and nine Teal the best. Nine Gadwall were on Snowdenham Mill Pond. Later on, news came through of a female Scaup or hybrid at Frensham Great Pond. I raced over but, alas, there was no sign there or on the Little Pond. Indeed, there were very few ducks at all.

Later on, images from the finder confirmed it was indeed a young female Scaup – a would-be south-west Surrey lifer and year tick, so pretty gripping stuff. A quick check of Cutt Mill on the way back just in case produced two Gadwall and a Kingfisher.

Having processed how rare Scaup is in south-west Surrey, I planned to be back at Frensham first thing. The local area in general is far from a wildfowl hot-spot and Scaup weighs in as a great rarity these days – this latest being only the third since the millennium and the first since 2006. Anyway, there was no sign on either pond, nor at Waverley Abbey Lake, Cutt Mill Ponds or Tuesley Farm. Indeed it was very quiet at each site.