This introduction is pretty much a copy and paste job from my last post – unseasonal weather during high summer, with freakish amounts of rain, and not loads of time in the field. That said, the odd bit of breeding action, butterfly hunting and hints of early autumn movement have been good value. Indeed, a a session on the first morning of the month was excellent. And of course, any time outside is time well spent!

A cracking morning of birding before work, with 63 species seen by the time I was home. There was a whiff of autumn in the air with a light dew on the ground and, sure enough, a first proper sign of the seasonal shift greeting me at Tuesley – two dapper summer-plumaged Redshank on the far sure. Weirdly enough I had two here on the exact date last year … unusually for this species they were settled, clearly quite tired after a journey from northern breeding grounds. My first of the year locally, too.

I then headed to Thursley, checking Pudmore first where the excitedly nervous call of a Green Sandpiper pierced the misty air. Another most autumnal sign. Water Rail and Snipe were also logged, the latter a surprise flight view of a bird carrying food – a nice way to confirm that hungry chicks must be nearby. I heard further Snipe and Water Rail on Ockley later on.

The sighting of the morning came at 6.50 am. I had been sifting through a Swift flock that were hawking over Shrike Hill when a stratospherically high-flying group of birds caught my eye. To my great surprise they were Shelduck – the last thing you’d expect at a Surrey heath during high summer. They powered north-east, perhaps on a long journey to Wadden Sea moulting grounds. Very cool indeed, and only the ninth record of this species here, which was last recording in 2014.

Other bits included both Kestrel and Sparrowhawk in flight and recently fledged Stonechat and Redstarts. Two of the latter showed nicely around Bunting Bushes. The Elstead Common Tree Pipit was still in near-continuous song, as he has been since he took up territory in May. It has been a very poor year for this species here and presumably this bird is unpaired.

I gave Frensham Great Pond a quick look afterwards, in the unlikely event the Alpine Swift had found its way there. It hadn’t, unsurprisingly, but one Kingfisher, two Sand Martins, five Common Terns and a Reed Warbler were good value, as was my first singing Skylark at this site.

I made sure to eBird a House Martin visiting eaves in Farncombe in the morning – when looking through my June records, I realised I saw this species once during the entire month! This is mostly because of less time in the field and at sites not favoured by hirundines, but still, it’s an astonishing and worrying tally, especially of what’s supposed to be one of our common summer visitors (for which numbers seem to be thinner on the ground each summer) …

I headed to Chiddingfold Forest in the morning, stopping en route at a recently found Little Owl spot near Hydestile where an adult was perched near a hole in an oak. At the forest itself, an hour-and-a-half yielded a decent 32 species – not bad for early July at a woodland site. This included an adult and recently fledged juvenile Nightingale right by a nest I found a few weeks back, which was pleasing.

Other bits included one each of Garden and Willow Warbler barely bothering to sing, Spotted Flycatcher, at least one Raven overhead, two Bullfinches, a flyover Siskin and my first House Sparrow for the site.

A quick look at Tuesley in the morning revealed a tired looking adult Redshank resting on the far shore. I didn’t want to disturb it so settled for a ropey record shot and departed. At home later on, I noted House Martin and Sparrowhawk from the kitchen window.

An adult Lesser Black-backed Gull was flying low over Farncombe during the morning of a wet and windy day.

A male Peregrine flew over the Duke of Sussex pub near Waterloo station mid-afternoon.

In the morning, a House Martin was flying around my road in Farncombe.

I did a walk of Tuesley in the morning, where yet another Redshank was present, resting on the east shore. Of my nine records of the species here, eight have come in the first three weeks of July – clearly this is peak time for failed breeders to move back south. I was surprised to hear two singing Reed Warblers by the older reservoir (which I rarely check, but apparently they are regular per Eric S), as well as a nest containing three Black-headed Gull chicks.

Later in the morning I tried again for Purple Emperor at Chiddingfold Forest. Despite the sun being out for a change I drew a blank, although some 14 species made for a pleasant couple of hours. This included my first Essex Skippers and Purple Hairstreaks of the year, as well as good numbers of Marbled White, Ringlet and Silver-washed Fritillary. 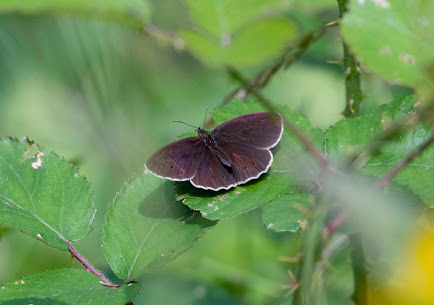 Bird activity was low-key, though I did hear singles of Nightingale (calling), Marsh Tit and Spotted Flycatcher and saw two Siskins in flight over Oaken Wood. Other bits included Common Lizard and Green Tiger Beetle, as well as a few familiar human faces! Nobody had seen any Purple Emperors and indeed I understand none have been reported all year so far – a shocking turn up for the books and symptomatic of an incredibly wet midsummer.

Just like last year, I took an early July trip to Bempton Cliffs in the hope of seeing a Black-browed Albatross. And, like last year, I dipped it again, once again seeking consolation in the awesome seabird colonies. This famous site is always a pleasure to visit and, in the company of Dave, Kit and Matt, I spent a bit of time trying to record some of said seabirds, managing Kittiwake and Gannet snippets. 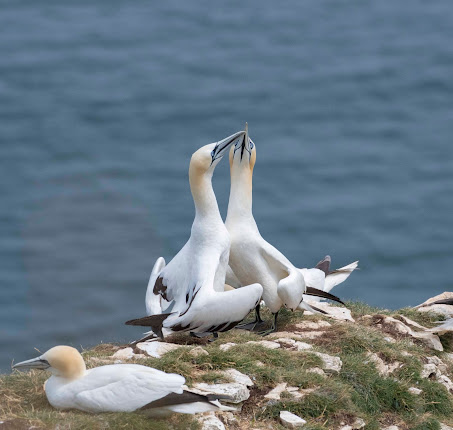 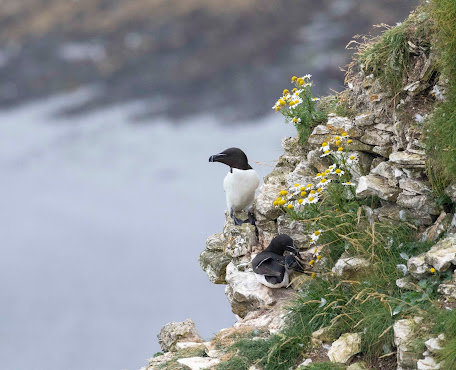 The warm south-easterly meant there was some light movement offshore, including two flocks of Common Scoter, a light trickle of Whimbrel and a distant flock of unidentified shorebird species (probably Dunlin). As southerners, the abundance of Tree Sparrows was novel, and other bits included a Barn Owl quartering in broad daylight, Stonechat, two Sedge Warblers and Kestrel.

A male Sparrowhawk and a couple of House Martins flew over Farncombe in the early afternoon.