Like most of the month – and indeed much of the spring and summer – the end of July was a bit of a washout. The weather has barely been able to string together more than a few days of settled warmth in 2021. Water levels are very high for this time of year and one wonders if there will be flooding issues to contend with come the winter. For now, though, here’s hoping for some more typical autumn conditions in the weeks ahead – and hopefully some fun migration to boot.

It was fairly quiet at the Pagham Harbour North Wall in the morning, with 49 species logged during an hour-and-a-half. Juvenile Marsh Harrier and Yellow-legged Gull were nice to see, along with seven Cattle Egrets (including two juveniles) in Owl Copse, Spotted Redshank, Greenshank and good numbers of Whimbrel and Curlew. Two Common Terns and a Teal were at Breach Pool, where a female Yellow Wagtail – apparently the first on the peninsula this autumn – dropped into the reedbed.

A long journey down to Cornwall was broken up by a stop-off in Dartmoor at Yarner Wood. A short stroll was unsurprisingly quiet, though no fewer than nine Spotted Flycatchers included three family parties. A brief female-type Pied Flycatcher – this species breeds in numbers here – was also seen, along with Willow Warbler, two Bullfinches and three Siskins.

There was time for an evening session at the beautiful Kenidjack Valley, where a Western Bonelli’s Warbler had conveniently been found the previous day. It took some locating among the many warblers, which included my first lemony juvenile Willows of the year, but eventually showed, albeit briefly. My first British record of this smart Phylloscopus. A Sedge Warbler was also noted, along with two Bullfinches, six Chough and a juvenile Green Woodpecker that drank quietly from a spring.

Following a fairly leisurely start, we headed to Portscatho for a scenic walk along the South-West Coast Path under warm blue skies. The highlight was four Cirl Buntings, which included three males (one singing) and a juvenile. I hadn’t seen this South-West speciality since 2018 and these were my first in Britain away from Labrador Bay. 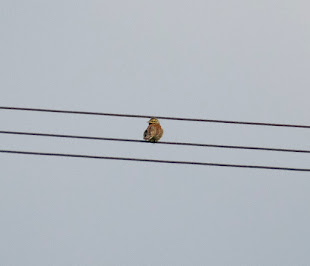 Other bits included two Rock Pipits, Stonechat, family parties of Greenfinch and Whitethroat, a male Sparrowhawk and a couple of Gannets offshore. A Green-veined White was among the many butterflies noted. Lunch was had looking out at Restronguet Creek, where decent numbers of waders included a female Bar-tailed Godwit, Common Sandpiper and four Whimbrel. A Peregrine flew over and two Little Grebes were on the River Kennall.

We had a boat trip out of Penzance booked for the afternoon. In glorious weather it was unsurprisingly quiet bird-wise (quite a contrast to my 2017 pelagic) but there was lots to keep us entertained, not least two pods of Common Dolphins, including a group of 25 animals that gave superb views around the boat.

Avian action was highlighted by a brief visit from a Balearic Shearwater. Some 246 Manx Shearwaters were counted, while other species included a few Fulmars and Kittiwakes, Mediterranean Gull, Guillemot and four Yellow-legged Gulls (three juveniles and a second-summer). Another juvenile YLG was in Penzance harbour along with a couple of summer-plumaged Turnstones. 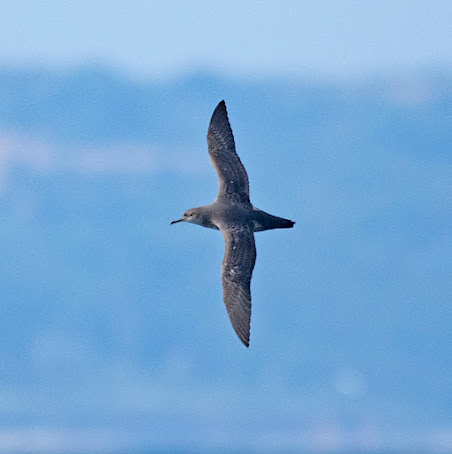 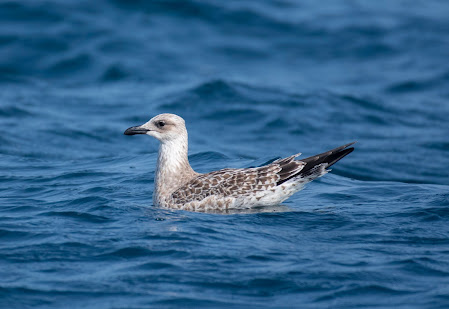 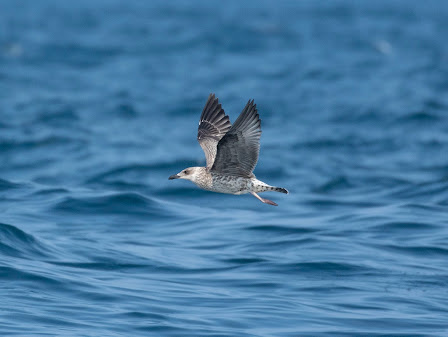 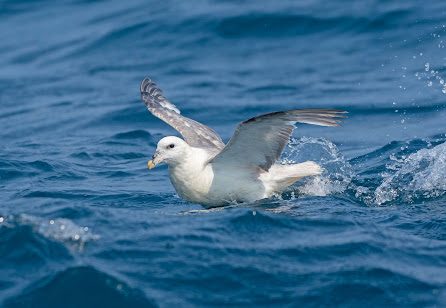 Another lazy start, then to Pendeen for a casual seawatch. Again a single Balearic Shearwater highlighted, in with a decent movement of Manx Shearwaters that tallied 754. Some 28 Kittiwakes, seven Mediterranean Gulls, 29 Fulmars, two Razorbills, four Guillemots and four Ringed Plovers were logged on the move too. Two each of Chough, Raven and Rock Pipit were also noted, along with a juvenile Yellow-legged Gull and 30 Shags.

On the drive home from an all too short weekend away, a Peregrine flew over the A303 near Honiton and a Corn Bunting was perched beside the same road near Stonehenge.

An adult Lesser Black-backed Gull flew over Farncombe with two juveniles in tow late morning – impressively, this species has bred in the village this year after a failed effort in 2020. Quite a notable Surrey record …

An increasingly breezy westerly greeted me at Tuesley where, yet again, there was no wader. July is the peak month for this site and last year, by this date, I’d enjoyed 21 records of seven waders species. This year, I’ve only had six records of four species. The most telling absence is Common Sandpiper – nine records versus one. I’m pretty sure the heavy rain this summer means the high water level is undesirable for passing shorebirds.

Anyway, despite a lack of long-legged beasts a fetching juvenile Mediterranean Gull was a delight to see – only my second-ever here and third locally this year. It was quite relaxed, allowing me to enjoy the beautifully scalloped upperparts and light sooty tones to the plumage. A Lesser Black-backed Gull also flew over. 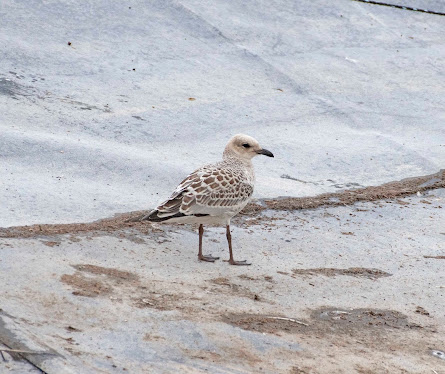 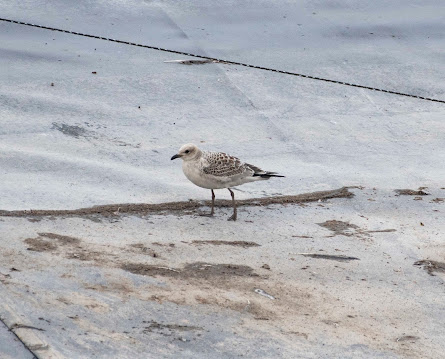 I headed to Shackleford next for another ringing session with Steve. It felt rather autumnal here – Skylarks had flocked up, groups of Canada Geese were feeding on the recently cut fields and the apple tree – a favourite of the winter Fieldfares – was bearing fruit. Three juvenile Reed Buntings were a surprise for July, too, as they worked along the Lone Barn margins. One even ended up in the nets later on. They can’t have come far, but who knows where they were born … 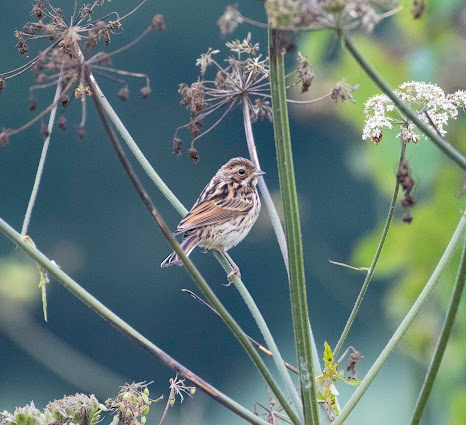 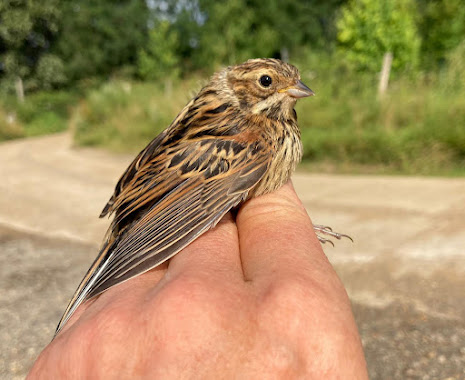 We caught 31 birds from eight species in all, including a Wren, three Whitethroats, four Chiffchaffs and 16 Goldfinches. Other bits included heard-only Little Owl and Ring-necked Parakeet, a Coal Tit along Hook Lane (rare here, this being my first of the year!), two Ravens and 35 Swifts tracking south-west along the North Downs.

In the evening, I heard a couple of Swifts from home, though the noise is much reduced in recent days and I suspect many of the Farncombe colony have departed south.

Another breezy visit to Tuesley, where a surprise Little Egret flew low south over the entrance – only my second here and always of note locally in the summer period. Two adult Redshanks – still largely in summer dress – were on the far shore and a real joy to see after such a slow wader month here. I spent a bit of time admiring these delicate beauties. 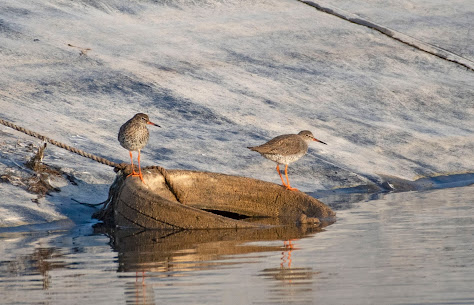 A male Sparrowhawk whizzed over the polytunnels, spooking up some 48 Pied Wagtails – another 15 (at least) were on the reservoir, making for a very high count indeed (10 Grey Wagtails were also notable). A relatively lively session was concluded by the juvenile Mediterranean Gull wafting in from the north before settling on the water.

At Tuesley in showery and windy conditions more akin to November, the Mediterranean Gull was still about, but it was otherwise quiet. At Snowdenham Mill Pond, I was pleased to see all six Mute Swan cygnets nearly fully-grown. The dark female Red-crested Pochard x Mallard hybrid was also present, along with 11 Mandarin, two Tufted Duck and two first-year Grey Herons.

I visited The Hurtwood for the first time in a couple of months, in a cool south-westerly. A trickle of Swifts flew west and – to my surprise – a Little Owl was calling from fields to the north. At least four Siskins were knocking about as well as my first local Crossbill since 14 June. I wonder if it will be a poor winter for the latter species. At least two Willow Warblers were probably birds that bred here.

Later that morning, Peter called with news of an interesting yet unidentified warbler at Shackleford. I managed to get down there eventually and, after a very long wait, the bird gave itself up: a Grasshopper Warbler. It only showed twice more, being typically skulking and hard to view, but the yellowish wash to the underparts allowed it to be aged as a juvenile.

This is a doubtless a regular passage migrant in south-west Surrey but is very rarely seen when on migration. Hopefully, this signalled the start of a productive autumn locally. Two each of Raven and Kestrel were also noted, as well as a Reed Bunting.