Our trip out west came good this week, with a flurry of finds and successful twitch of a mega wader. In total, I've managed 116 species in western Ireland during this past fortnight, with some proper quality in there: two Red-eyed Vireos, Solitary Sandpiper, American Black Duck, American Golden Plover, Barred Warbler, American Wigeon, two Yellow-browed Warblers, four Sabine's Gulls, 150 Sooty Shearwaters, Curlew Sandpiper, White-tailed Eagle and Little Stint are just some of the highlights. It's been a slog for the most part but that's the nature of the beast here – and ultimately it's been worth the grind.

A mixed day. Ferociously strong winds didn't prevent us from hammering the island again, with the recent low firmly in our minds. Once more, however, we scored zilch – not even a Chiffchaff or Blackcap – despite covering 20 km on foot in the morning. The Swallow family in Dooega were an arguable highlight.

The weather clearly had produced, though, as news from the nearby Mullet Peninsula came through: a Red-eyed Vireo. In need of a boost we went for it – and how worthwhile it proved. This species has long been top of my wish list, so to be the only birders watching it in a wind battered garden on a remote Irish headland was truly special. It even called for us and occasionally caught insects along a clump of willows, but generally kept elusive in the strong breeze. Magic stuff. 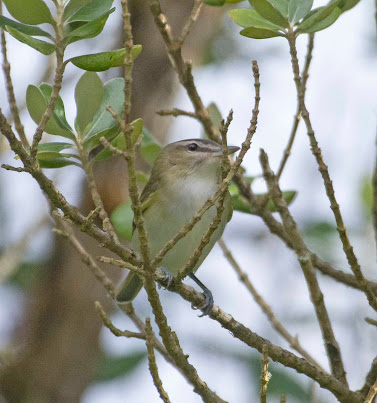 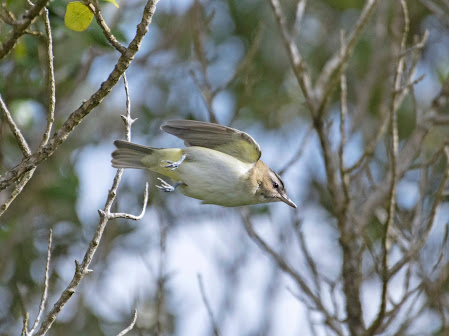 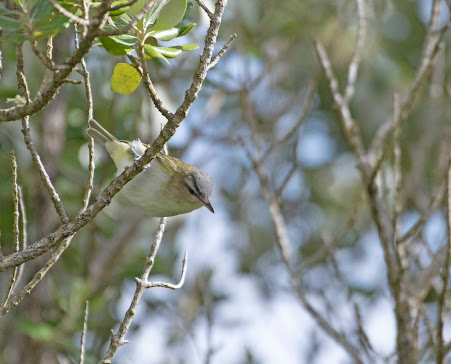 Amazingly, while we were watching it news broke of a Solitary Sandpiper 10 minutes down the road. We eventually pulled ourselves away from the vireo to try and connect, but sadly missed this particularly flighty bird that had been favouring a small puddle in a paddock. After two hours we called it quits – and of course it was reported again not long after we made it home, knackered and drained after a long day in the field.

It was calm and largely bright this morning and felt good for finding. I gave Dooega my best effort yet – four hours and some 9 km walked – but while I got a personal high species count for the site (35) I failed to log any migrants, save a flyover Siskin; tenuous at best … other bits included my first Dooega Choughs, two Ringed Plovers on the beach and four each of Shag and Stonechat. The afternoon was a repeat – lots of kilometres walked and few birds seen. We retired at 5.30 pm, defeated, and headed to the pub for some consolation pints of Guinness.

We decided to try for the Solitary Sandpiper again, getting up early and arriving by the paddock early morning. A patient wait was livened up by the appearance of Snipe, Redshank and Rock Pipit on the incongruous muddy puddle, which wasn’t dissimilar to the one at Shackleford that has lured in waders before. 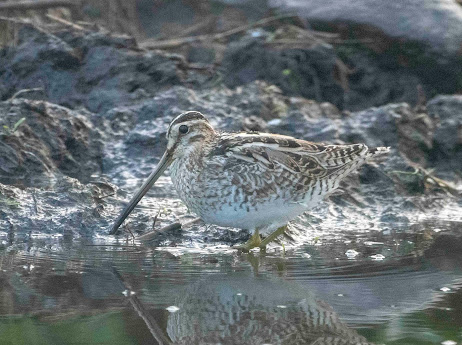 The moment came a little after 10 am, when we picked up the Solitary Sandpiper on call. It landed briefly then flew off, but thankfully it returned shortly after and we ended up enjoying some 10 minutes of crippling views of this mega Nearctic wader as it foraged on worms and insects. A lifer for me, I was surprised at how different to Green Sandpiper it was – almost like a hybrid between Wood and Green Sandpipers. 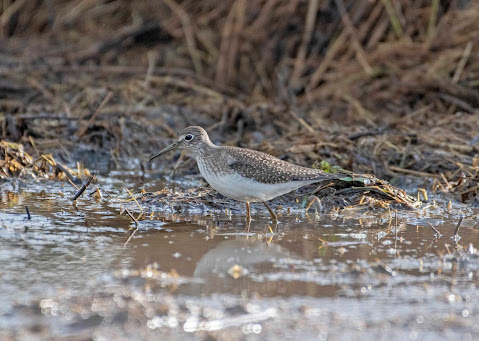 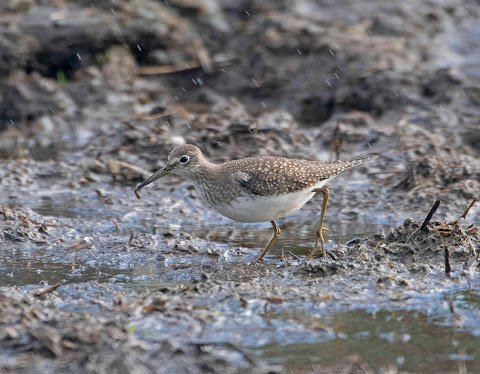 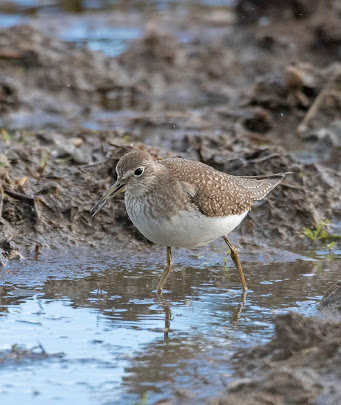 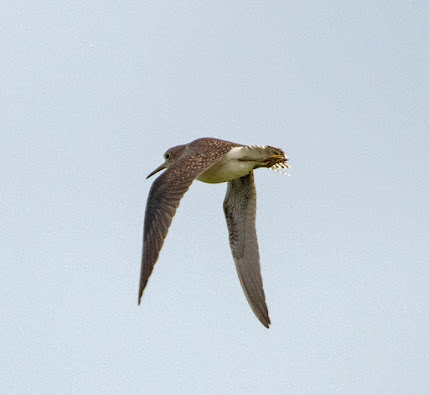 The marked eye-ring, spangled upperparts and longish, slightly drooping bill were all noted, as well as a rather attenuated and delicate structure. The classic ID feature is the dark rump and this was seen in flight, when the bird vocalised too. A quality encounter …

In the afternoon I wondered the village again but it was quiet as ever, with nothing of note seen.

A mega day. It was calm and bright as Josh and I decided to go to the village of Doogort for the first time on this trip – this proved a good decision. It felt birdy from the off and in no time I finally got my first Chiffchaff of the trip, followed by a Treecreeper. But the big one was lurking in an alder copse behind the Strand Hotel: Red-eyed Vireo! 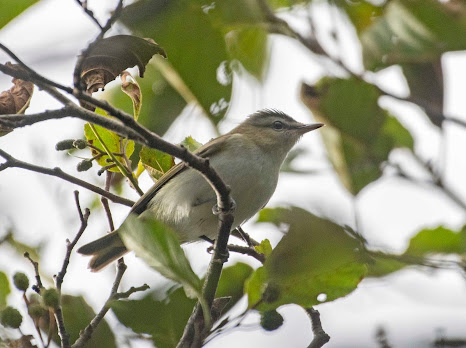 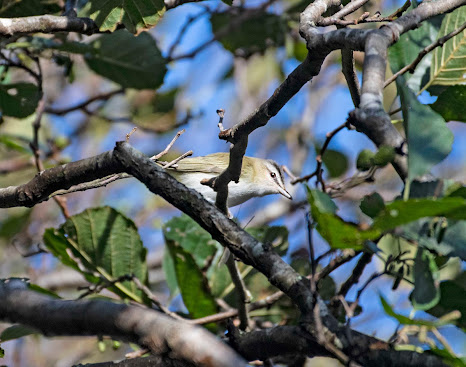 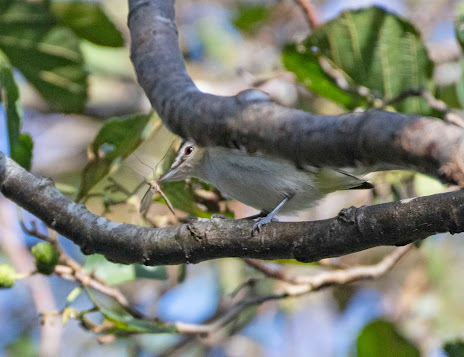 It was elusive and mobile but showed for about 45 minutes as we frantically kept up with it under the canopy. It had no trouble finding food – Daddy Longlegs, shield bugs and other insects were all consumed, sometimes quite casually while it sat and preened. An amazing encounter, and Dan was able to get over in time before we lost it. Despite extensive searching we didn't locate it by the end of the day, but to be fair we were quite distracted at times …

Upon exiting the copse and walking down the lane, the appearance of a Barred Warbler was almost less expected than the vireo! While not the most remarkable scarce if on Shetland or the East Coast, Barred Warbler is pretty mega out here and this seems to be the first Mayo record since 2014. Like the REV it was easily finding food, often munching on berries. We saw it several times during the day, but it could go missing for spells. 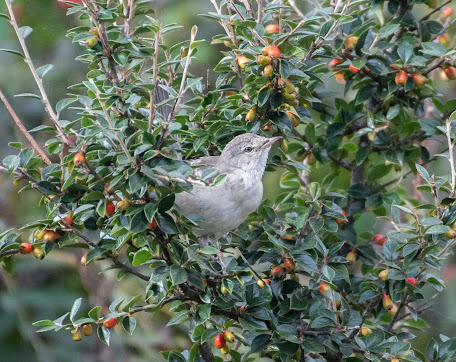 After this bird had been appreciated, the crazy spell continued when a Yellow-browed Warbler was espied with a Chiffchaff further along the lane. It was mobile and didn't allow for photos, though it called often and indeed we heard it a few more times during the day in the general area – only the second in Ireland this autumn. What a crazy hour or so – a fortnight of no migrants whatsoever, then three in close proximity. The madness of rarity hunting out west demonstrated in style!

Other decent bits in Doogort included Bullfinch, three Woodpigeons (my first on Achill!), Sparrowhawk, Chough and Siskin. In all, an epic morning and easily the birdiest of the trip. Even though a thrash around the west end late afternoon was quiet, a House Martin over the garden was another unexpected record and capped off an immense October day in the field, with birds from all points of the compass.

Another bright and dry day, though the wind had picked up and swung to the north-west. With the next few days looking wet and windy I decided to do the patch rounds at Dooega one more time, with half an eye on hitting 50 species for the site, having managed 47 so far. Things started well with five Greenfinches flying about the paddocks – a trip first.

Two Shags were on the jetty and 27 Ringed Plovers on the beach, but my hoped for patch goodie came in 'Sallow Valley' – an extensive area of sallows in a sheltered part of the village I'd nicknamed – courtesy of a Yellow-browed Warbler among a small group of Goldcrests. The bird was silent and hyper-active, so photos were a challenge, as you can see below. Only the fourth in Ireland this autumn and good value out west … 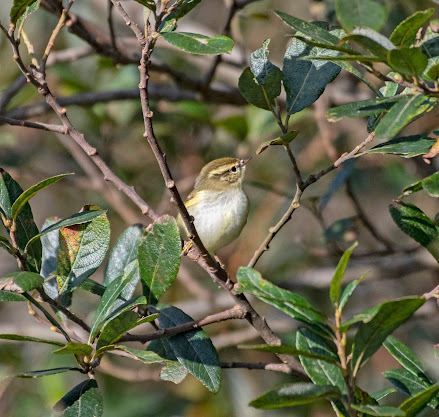 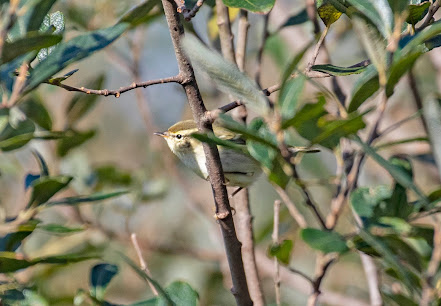 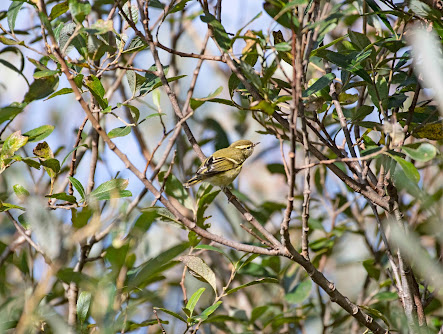 In all I managed 38 species – my best patch effort yet. It was capped off when two Skylarks flushed on Dooega Head took me to a pleasing 50 species for the site.

I met with the others after to check Doogort again at midday. It was much quieter than yesterday, with no sign of the Barred Warbler or REV, though they were both seen in the evening. A male Bullfinch and two Swallows highlighted.

On the way back, a quick check of Loch Doo produced, with two cracking adult Whooper Swans on the water. The duo were being harassed by the local Mute Swans and were calling often, but generally seemed relaxed as they fed in the shallows, giving quality views. Fresh in from Iceland no doubt – lovely stuff. A small flock of Lapwings were fluttering around in the distance too. 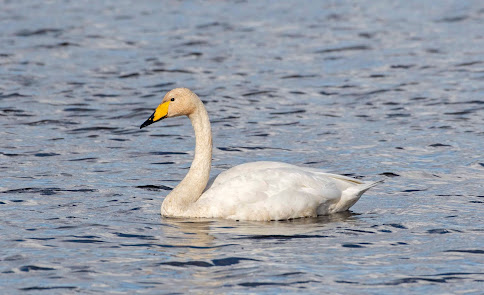 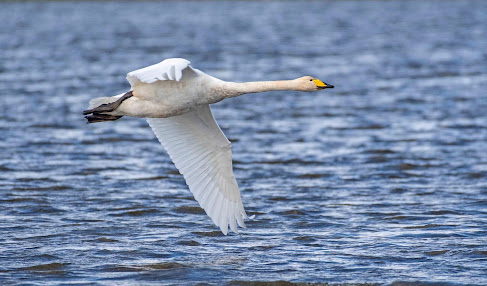 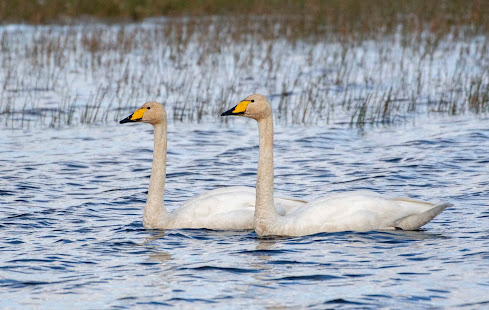 A short wander around Dooega in the evening produced a surprise group of 10 Kittiwakes sat on the sea and two Swallows over Sallow Valley, though there was no sign of the Yellow-browed Warbler.

A grim day with persistent rain and a stiff southerly breeze. A quick scan from the living room revealed at least one Kittiwake still on the water, but not much else.