I haven’t got a great recent relationship with September on the patch. Despite being perhaps the most dynamic birding month of the year, certainly on a national level, I’ve always found it frustrating. More often than not, after a blinding August, I’ve gone flying into the month with great expectations, only to be met by mediocrity. Conscious not to fall into the same trap this year, after a superb August, I mixed things up over the weekend.


Typically, one doesn’t have to wait long from 1 September for the first Meadow Pipit of the season – this came on Friday 6th, when one flew over Allden’s Hill. The forecast for the weekend – after the joys of late August south-easterlies – was average at best, with blowy north-westerlies dominating. Not, perhaps, the best conditions for a Leith Hill tower watch, but having not done one for far too long, I couldn’t resist the hellish, pre-sunrise climb from Windy Gap …

In the excellent company of Matt, Robin, Mark D and David S, it was hard to get too enthused with the unexpectedly gusty and cold wind. Indeed, I called it early and said something along the lines of: “this will be an all or nothing watch – raptor or seabird or bust”. That said, a trickle of Mipits propelled overhead and a few distant hirundines seemed to drift south, while mixed flocks around the tower contained Firecrest, Willow Warbler and Marsh Tit. 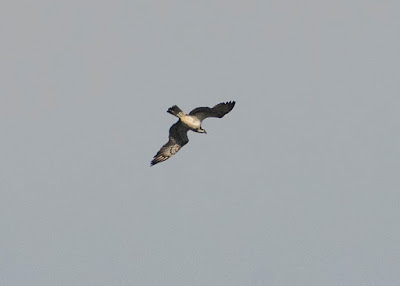 A distant Little Egret triggered an ‘orange Club biscuit’ moment (my first), but we’d clearly forgotten Wes was within a few miles of the tower with his eyes open, thus the heads up of something far more noteworthy was inevitable. Indeed, the call came that he had an Osprey over Dorking, drifting our way … after a few minutes it appeared, initially at distance.

Much to our delight the bird came towards us, clearly tracking the High Weald Ridge west, having flown down the Dorking Gap. As far as I can tell it was an adult, presumably in suspended moult for migration. It never came super close but the views were good, and we eventually lost it towards Winterfold, heading straight towards my patch. Interestingly, one was seen near Shalford that evening – I’d put money on it being the same bird.


The importance of the High Weald Ridge as an aid for migrating birds is something I am sure is significant. Indeed, it merits an entire blog post, so watch this space … The rest of the watch reverted to pre-Osprey levels: average at best. However, the passing raptor was enough to render the visit a success.

I was back on patch on Sunday morning in far brighter, but no less windy, conditions. Thus, my own vis-mig session was somewhat hampered, though a Yellow Wagtail and Tree Pipit south were surprisingly high quality. A few Willow Warblers sang in the sunshine too (listen here for audio of one).

Otherwise, it was quiet, so I checked out a private site not far away. I was rewarded with a Common Sandpiper and an incongruous looking Snipe, seemingly knackered and hardly able to move, so I gave it a wide berth (having ruled out Great Snipe first!).

It turns out there was a bit of local Snipe action that morning and the previous night, presumably to do with a broad southerly movement of birds associated with the north-west winds – Wes had one over his garden and Isaiah recorded an impressive five over his garden that same morning.


And that was that, for another weekend. A brief forage for blackberries (inspired by Matt ‘Paul Hollywood’ Phelps and his tasty sounding crumble recipe) on Sunday afternoon produced a gathering mass of hirundines and a Raven over Slades Farm, but little else. The forecast for next weekend looks exciting at present – here’s hoping.
Posted by Ed at 07:21