From Russia with love

The extraordinary influx of Russian White-fronted Geese to south-east England took a while to infiltrate south-west Surrey but did so dramatically this week, with at least five birds across four sites. Heavy rain has meant the river between Catteshall and Unstead has proven attractive to waterbirds – if south-west Surrey’s first Tundra Bean Goose for more than 75 years is to happen soon, I fancy it to be along the Wey in the coming weeks – and this area has taken up most of my recent attention. A dry spell until the end of the year may spoil the party a bit, but I’m sure things will get damp again at some point …

I was heading to Snowdenham Mill Pond first thing but, while passing the water meadows at Unstead, I noticed more geese than normal on the flash opposite Unstead SF (known by locals as ‘Flooded Field’). A scan from the gate on Trunley Heath Road soon unveiled a prize I’ve been seeking all month: White-fronted Geese. Three, to be precise, and all cracking adults, tucked in with a huge flock of some 180 Canadas and a few Greylags.

I was dead happy to find my own local birds and, better still, it was a new bird for Unstead, a site that already has a very long list (a previous record in March wasn’t considered wild). They were a bit skittish and by the time Kit arrived on the scene they’d headed away from the road. Pleasing stuff all round: the 17th White-fronted Geese for south-west Surrey and the first record along the River Wey in this part of the world since 1851! Unfortunately, the dull and gloomy early morning light meant all my images were taken on a super high ISO … 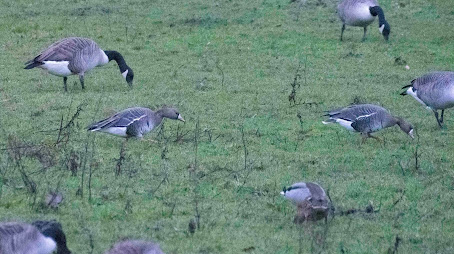 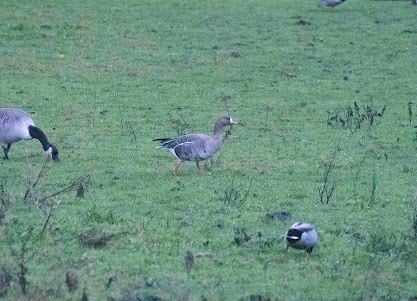 The reason for the geese was recent rainfall. My suspicion is, when there’s a lot of rain, birds are flooded out of their main haunts around Burpham; there is a correlation between heavy rain (and thus flooded fields) and more numbers of things like Teal and geese. I wouldn’t be too surprised if the white-fronts were from the recent 22-strong group at Burpham. Indeed, 19 were seen near Woking the same day as these birds arrived; surely part of the same original flock ...

Some 15 Teal were on the main flash, along with two drake Gadwall, a species I haven’t seen in the Unstead SF recording area since 2015. Two each of Cormorant and Kestrel flew over, while Green Woodpecker and Treecreeper were heard-only. I didn't check the works, but Kit had the Cetti's Warbler again.

I did eventually get to Snowdenham Mill Pond, where four Teal, nine Gadwall, two Mute Swans and the now resident Shelduck all noted. After, at Loseley, three Kestrels were flying around the meadow and a male Sparrowhawk whizzed over. Cutt Mill was then checked, with two redhead Goosander, a Kingfisher, the first-year Mute Swan, two Gadwall and 13 Mandarin entering the notebook to conclude a productive morning.

I squelched around Overgone Meadow, on the Lammas Lands, first thing, failing to locate Water Pipits and only notching up two Snipe. A Firecrest in a scrubby bank beside the railway bridge was a nice surprise, as was my first drumming Great Spotted Woodpecker of the season, further up the river at Unstead Water Meadows.

Here, Sam had relocated the white-fronts at the north end, which had flooded following the overnight rain. Indeed, it seems all of the geese that were opposite the sewage farm yesterday were now here, including 79 Greylags and some 175 Canadas. Initially the white-fronts were distant, as we viewed from the towpath, but upon walking round to the other side we were much better positioned and they ended up a lot closer than yesterday. What fantastic birds to have so close to home. 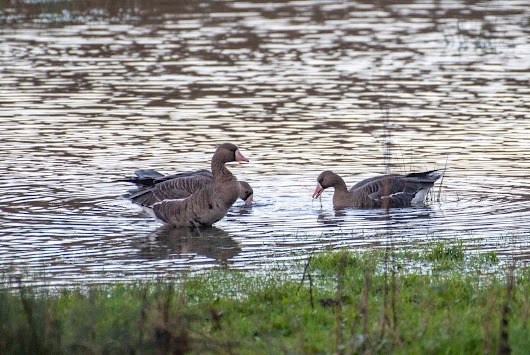 Recent flood defence work near Godalming seems to mean this area fills up a lot easier than before and it’s quite a spectacle when it does. As well as the geese, nine Little Egrets were dotted about, three gull species loafed, a Water Rail squealed and a Kingfisher flew upstream. A Skylark also flew high south – a species extirpated from this part of the river as a breeder and one I hadn’t seen along the Wey for five years. The scrubby path by Perry Bridge held a Chiffchaff and a neat flock of 60 or more Siskins. 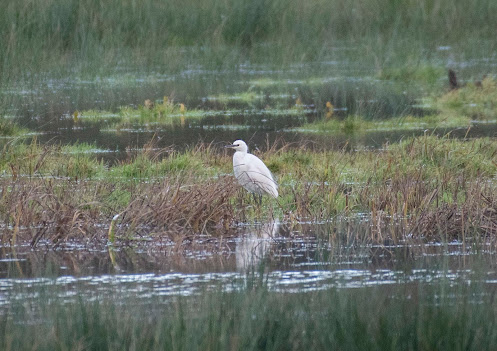 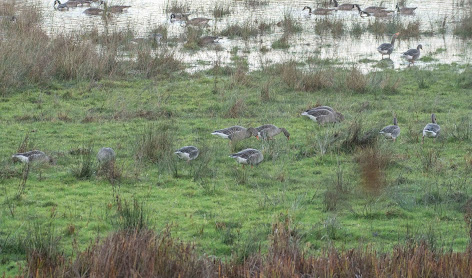 I then headed south to Chiddingfold Forest. A two-hour stroll in lovely conditions was relatively quiet, though no fewer than six Bullfinches was a good count and included a singing male. Two Marsh Tits were also noted, along with a Crossbill, a flyover Raven and a male Sparrowhawk.

A very mild day for late December. In a brief outing, the Shelduck was still on Snowdenham Mill Pond late morning, along with my first Shoveler there for over a month, five Gadwall and a drake Teal. A walk along the towpath at Unstead Water Meadows was similar to yesterday, with the continuing three White-fronted Geese highlighting. Water Rail, Kestrel, Green Woodpecker, Grey Wagtail and four Little Egrets were also noted.

Another mild morning. Today, eight Snipe were on Overgone, including five flushed together. A couple of Reed Buntings were in the sedges and a Red Kite drifted over, while two Grey Wagtails flew along the river. At Shackleford, most birds were around the north fields and included Lesser Redpoll, Stonechat, 30 Meadow Pipits, 20 Skylarks (one of which sang briefly), 12 Linnets and seven Reed Buntings, all of which were kept on their toes by a bright male Sparrowhawk that was loitering. Two Red-legged Partridges were also present, while a female Kestrel and eight Teal were on and around the ponds near the farm entrance.

I visited the Frensham and Wrecclesham area for the first time this month in wet and dreary conditions before work. On the Great Pond, most of some 62 Tufted Duck were off the hotel, along with 14 Pochard – my joint-highest local count of the latter species this year. Two Little Grebes were in the south-east corner. While passing the Wey near Frensham Manor, three Little Egrets were noted. Wrecclesham Water Meadows had topped up a little and, like clockwork, held 40 or more Wigeon.

A much chiller morning with a breezy northerly wind making it feel like winter proper. The sun hadn’t quite broken through during a walk around Winkworth Arboretum, on which a Sparrowhawk, Bullfinch, three Siskins, two Reed Buntings and a Grey Wagtail highlighted. I checked Snowdenham Mill Pond on the way back – to my astonishment, two juvenile White-fronted Geese were at the far end with three Canadas!

During the next 20-minutes or so the group swam a little closer, before they all flew north. It seems very likely that these are the same two that roosted at Thursley from roughly 12-20th; perhaps they have been roosting here since, as indeed they probably had done the previous night. They were truly extraordinary scenes for this humble waterbody – wild geese all the way from the remote Russian tundra, here on the little mill pond on my patch. In this extraordinary influx, birds along the river and even in the roost at Thursley had been somewhat anticipated, but this record was much more special and wholly unexpected. A first for the pond, but the second for the Thorncombe Street area ... 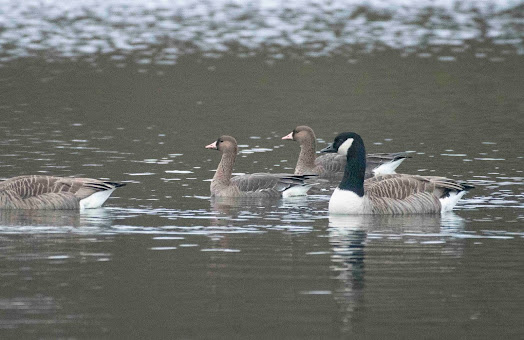 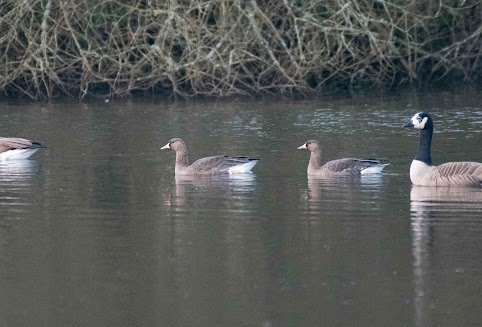 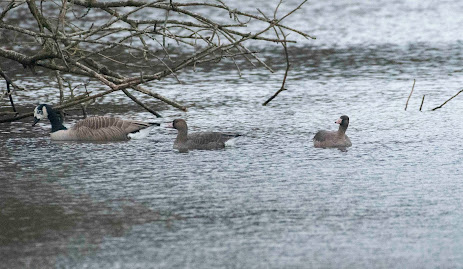 Other birds present this morning included singles of Shelduck and Red-crested Pochard (the female’s first appearance since September), along with a handful of Gadwall, Teal and Mandarin. Snowdenham Mill Pond routinely punches above its weight in a local context and, despite its small, size, is one of the best water bodies in south-west Surrey; I have seen more wildfowl species here this year than at both Frensham ponds.

I had time to quickly check if the white-fronts had dropped into Unstead Water Meadows but only the three adults were present, at the north end with some 70 Greylags. Six Little Egrets, a Kingfisher and a swirling flock of 90 or more Siskins were also seen. 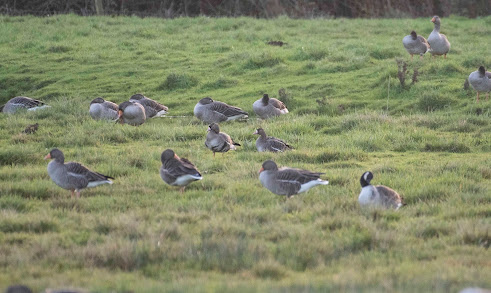 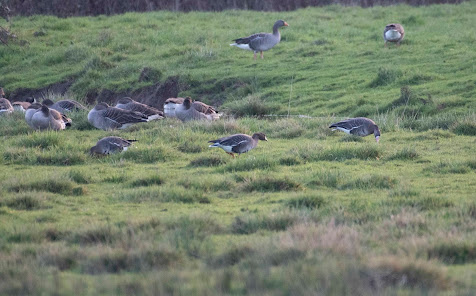 In the early afternoon, a walk around a very busy Hydon's Ball was quiet in sunny conditions, though away from the crowds a Firecrest called from a dense stand of holly.