A freezing end to 2020 has seen south-west Surrey decked out in shining frost most mornings. Despite the chill, the pack hasn’t been shuffled much in terms of birds – or at least not yet – and it’s been a case of as you were during the final week of this crazy old year. What will 2021 bring?

Before visiting my parents for the day, I birded a few spots nearby on a cold but sunny morning. At Goring Gap, four Brent Geese included a juvenile on the fields, where a few Ringed Plovers and Dunlin pottered about. Widewater Lagoon held six Little Grebes, a Kingfisher and Sparrowhawk, while 110 Dunlin were roosting on the beach with good numbers of Turnstones and Ringed Plovers, as well as a single Sanderling.

Then, some 33 species were tallied up at Brooklands Park, with the highlight a Lapwing being harried by a Peregrine pair. Other bits included a drake Pochard, three Chiffchaffs, four Teal and singles of Kestrel, Green Woodpecker and Grey Wagtail. Late at night, a Tawny Owl was heard near Haslemere.

A surprising start to the day was an adult Grey Heron perched on next door’s roof, especially given the lack of ponds in the area. I got to Thorncombe Street mid-morning but an hour’s walk was quiet. The crops on The Ridge are very poor this winter and held just about double figures of Chaffinches, along with a handful of Linnets and Goldfinches. Three Bullfinches were heard at different spots and two Red-legged Partridges were seen fleeing the guns (I’d foolishly forgotten Boxing Day isn’t a great time to bird a shooting estate!). A calling Chiffchaff on The Ridge was unexpected.

Said chiff triggered me to check Unstead SF. At least two, but possibly four or more, Chiffchaffs were quietly zipping about. In the lagoon, I was pleased to see the Siberian Chiffchaff again, though unfortunately the encounter was brief. The Cetti’s Warbler sang and a Lesser Redpoll flew over, but receding water levels meant Flooded Field held only a Little Egret.

The back end of Storm Bella was blowing through as I cycled up a muddy towpath to check Unstead Water Meadows – the conditions didn’t help, but only 20 Siskins and Grey Wagtail were of note. The flooded field opposite Unstead SF, however, was full of birds with the flash topped up again. The three White-fronted Geese were with Canadas today, grazing on the only dry spot, while singles of Gadwall, Lapwing and Little Egret were noted, along with 16 Teal. One of the local Red-crested Pochard x Mallard hybrids was also knocking about as well as a small flock of Redwings. 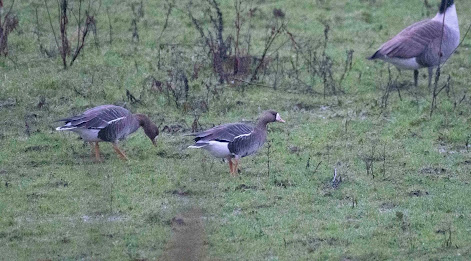 The sun then came out and I decided to make the most of it with a long walk around Frillinghurst Wood and the adjacent farmland near Grayswood. The wood itself was quiet: Lesser Redpoll, Siskin and Marsh Tit highlighted. An area of winter crops north of Imbhams Farm had a few small flocks of Linnets and Chaffinches feeding in the winter stubbles and, best of all, some seven Woodlarks which were flushed up by a dog before resettling. Three more Marsh Tits at Grayswood sewage works included two territorial males.

Some farmland south of Thursley village held no seed-eaters, though a small flock of thrushes contently fed and included my only Fieldfares of the day. Later on when I was at home, not long before sunset, four Mute Swans flew south down the Wey.

With news of a Short-eared Owl at Hankley Common the previous afternoon, I was on site half an hour before dawn in freezing conditions. Sadly, an hour’s walk around the area in which it was spotted didn’t deliver. Only 15 species were noted at this especially barren south-west Surrey site, including a single Crossbill and three Cormorants overhead.

Shackleford was livelier, despite the hard frost that hugged landscape. A Lapwing flew from the alfalfa, which held small groups of Skylarks and Meadow Pipits. Two each of Stonechat and Lesser Redpoll were in the set aside, a Lesser Black-backed Gull flew north and two Ring-necked Parakeets noisily bombed south. One Teal was on the reedy pond. At Tuesley Farm, an adult Lesser Black-backed Gull and seven Little Grebes were noted.

Slightly milder this morning in the westerly with no proper frost, but still cold. The usual fare was encountered at Winkworth: two riotous Egyptian Geese, six Tufted Duck, 11 Mandarin, five each of Little Grebe and Siskin and a singing male Tawny Owl. At Snowdenham Mill Pond, there was no sign of the Shelduck – right on cue for 2021 listing efforts! – but five Gadwall and two Teal were noted.

I then walked along the river from Unstead to Catteshall. The three adult White-fronted Geese were north of Tilthams Corner Road with Greylags; with no rain forecast in the coming days I wonder if they will move on soon? 38 other species were tallied up in the following 45 minutes, including a Bullfinch, 20 Siskins, some 150 Black-headed Gulls and, best of all, a Peregrine that flew south-east.

No birding, but while passing Tilthams Corner Road I espied the three adult White-fronted Geese, with a single Greylag congener, in the field to the north.

Thursday 31st
Allden’s Hill looked glorious in the dawn frost but there wasn’t much about in a brief scan, though a Crossbill flew over. Snowdenham Mill Pond has unfortunately had a clear out since a recent shoot and two Mandarin were the only wildfowl of note. The White-fronted Geese were again passed on the water meadows en route to Shackleford, where a bitterly cold walk around the north fields produced 40 Skylarks, Bullfinch, two Reed Buntings, 45 Meadow Pipits, 60 Fieldfares, Red-legged Partridge, four Lesser Redpolls, 150 Starlings and a Grey Wagtail.
Later on, at home, I was pondering my 2021 birding plan: south-west Surrey year list again, a Surrey vice-county big year or a 5 km radius of the Godalming Pepperpot challenge. As I was thinking, Peter O text with news of a Dartford Warbler on the Lammas Lands: a first for the river. A little over five minutes later, and barely half a kilometre walked, I was watching the bird – a first-winter – zip around a thistle patch. A lovely way to end the year and food for thought as we move into 2021 ... 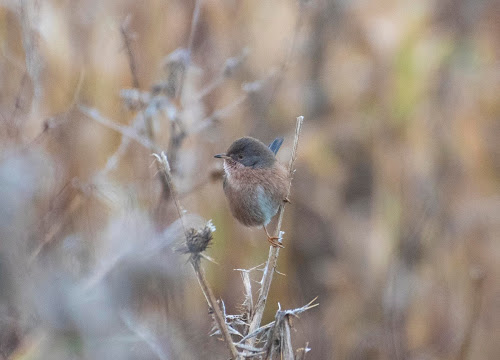